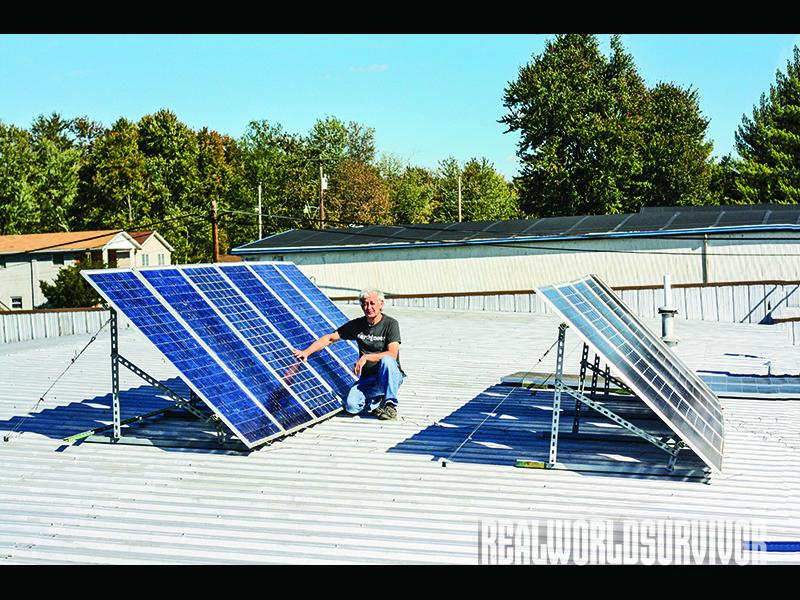 1 of 8
Photo by Courtesy of Earthineer.com
Don Adams’s Solar Array
Don Adams on the roof of the building that houses his broadcast-engineering company. He built and installed the panels that are wired to inverters. 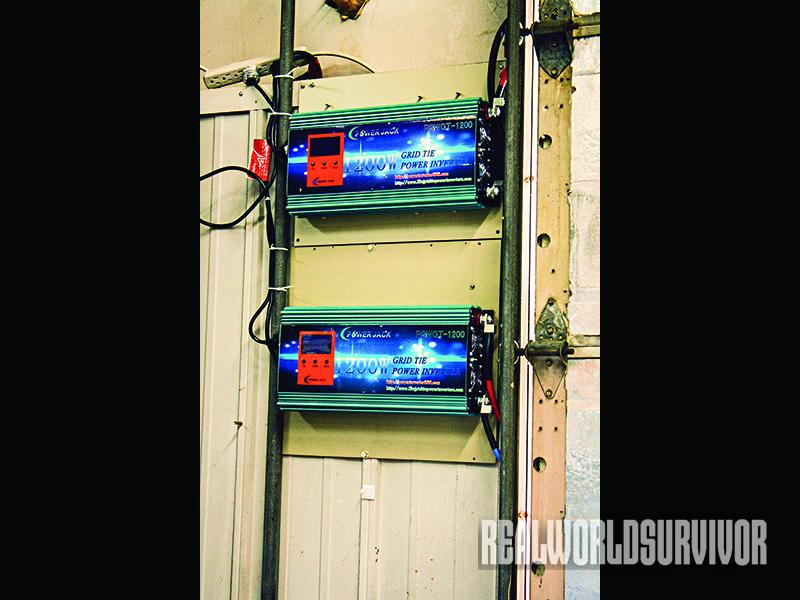 2 of 8
Photo by Courtesy of Earthineer.com
Don’s Power Inverters
The solar panels Don has installed on the roof of his shop are connected to power inverters that tie into the grid. 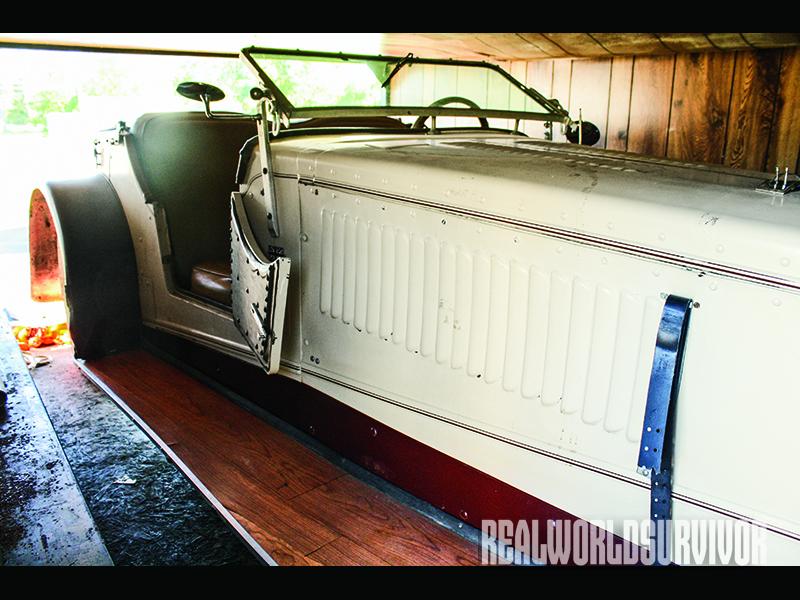 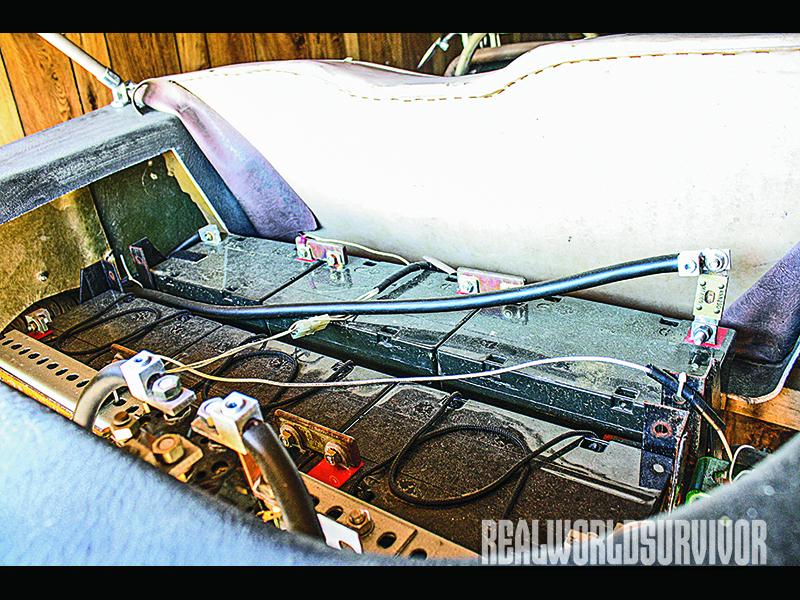 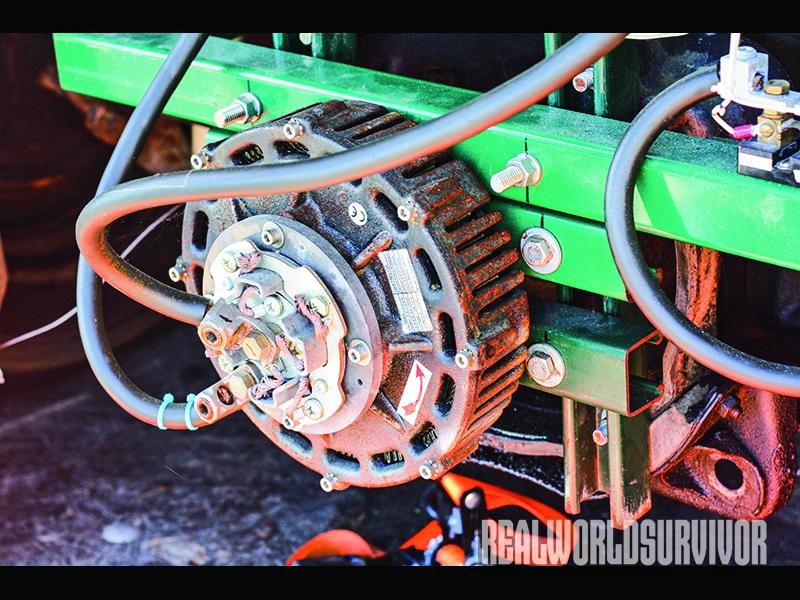 5 of 8
Photo by Courtesy of Earthineer.com
Don’s Magnetic Motor
In selecting a motor, Don strived to balance high power with low weight, going with a German 74-volt permanent magnet motor. 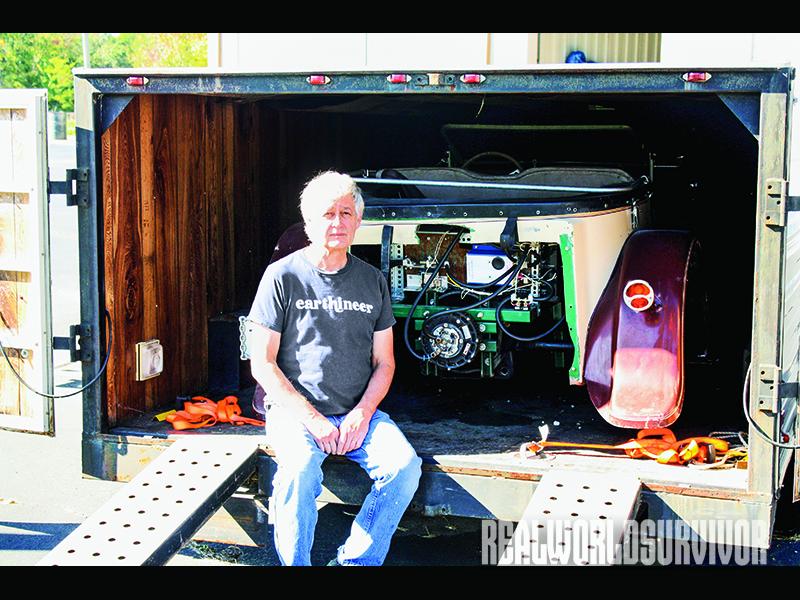 6 of 8
Photo by Courtesy of Earthineer.com
Don’s Electric Car In Transport
Although it can drive fairly long distances without a charge, Don transports his electric car to demos in this trailer. He built it from a fiberglass-body kit car. 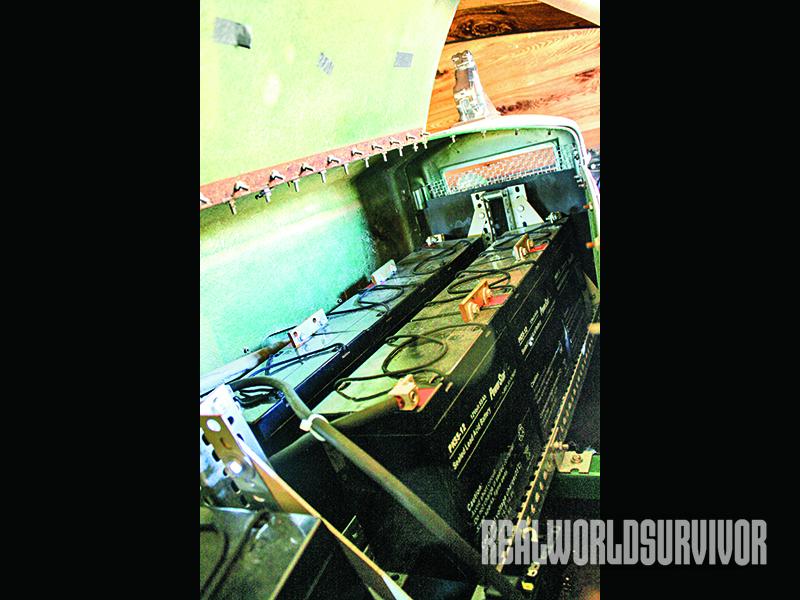 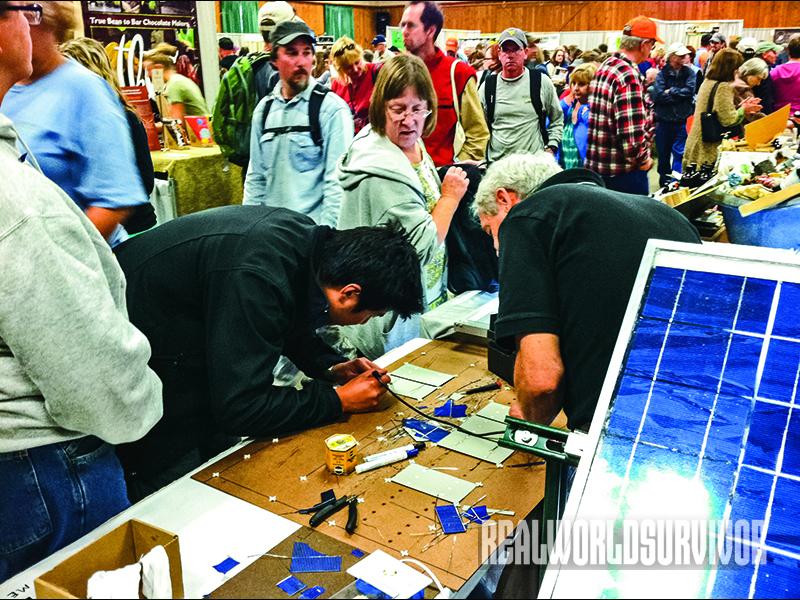 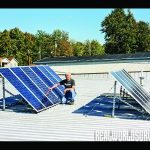 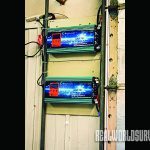 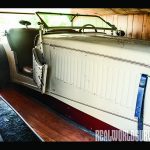 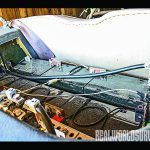 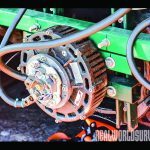 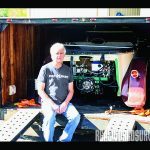 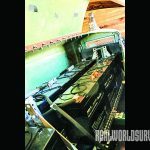 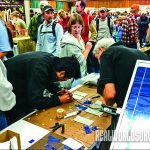 Don Adams, an electrical engineer from northern Kentucky, is the father of Dan Adams, founder of the online homesteading marketplace and social network Earthineer.com. In 2010, while Earthineer was still in its infancy, Don posted his “Grumpy Old Man’s Manifesto.” In it, he said, “The so called ‘economy of scale’ and ‘mass production of food’ now rampant in our society may not ultimately be the ‘best course’ for us as individuals.”

In my discussions with Don, I’ve learned that he’s not really a grump. He is actually quite a pleasant fellow, unless you get him talking about the state of energy in coal-powered Kentucky. To summarize the rest of his manifesto, Don notes the dramatic changes he has seen through three generations of life in America. Growing up, he recalls watching his grandmother preserving food for storage in the basement, her “storehouse of food for the coming winter.” She bought everything locally because that was the only option.

Grocery stores and specialty shops provided the bare essentials when she needed backups for what she was already producing, but their stock was limited and couldn’t be relied upon as a sole source for provisioning a family. The vast majority of these small businesses have since been pushed out by, as Don puts it, the “megastores loaded with goods mass produced under questionable circumstances and containing ingredients that came out of some chemical vat.”

Don’s grandfather was a gardener, but gardening skipped a generation in his family, with his parents being part of the generation that, by and large, let gardening languish in favor of the convenience of grocery stores.

Don, though, kept a small garden as a child. “During the time when I was growing up,” he told me, “I was the one who had the garden.” This was largely due to the influence of his grandfather on his father’s side who kept a “weekend garden” on a farm he had bought on 40 acres outside of Chicago. Don continues to garden in the suburban backyard of his house near Florence, Kentucky, which was on mostly wooded land when he and his wife Hilda purchased it.

Like many of us whose thoughts on the modern food system echo Don’s sentiments, he doesn’t have a problem with science, and appreciates the conveniences of modern life. He doesn’t feel we should necessarily go back to the days of his grandparents in every aspect of our lives, but rather step back continually and review “cause, effect and benefits.”

Don ends his blog with: “We have the ability to change ourselves! By buying differently (organic, locally, etc.), we can individually influence the market place! Collectively we can make a difference….”

Practicing What He Preaches

In the few years since drafting his manifesto, Don and his son Dan have gone nationwide—and, to a degree, global—with their plans to be the change they want to see in the world (to paraphrase Gandhi). As GrumpyOldMan, Don has written many more blogs since his initial manifesto on subjects such as solar and other forms of alternative energy, gardening and plain old lighthearted philosophizing.

Grumpy and Grumpy Jr. don’t just sit at home working to change the world one solar panel at a time. They’ve taken their show on the road. They tirelessly travel throughout the U.S. to homesteading and sustainability festivals to present workshops on DIY solar panels and LED-powered aquaponics. They have been keynote speakers at the Mother Earth News Fairs in Pennsylvania, Washington, Kansas and North Carolina, and have held room-filling workshops at other events. Solar panels and aquaponics are just the tip of the iceberg.

To demonstrate the true versatility of solar power, Don has built a number of contraptions, and has more in the works. At the building he owns for his broadcast-engineering company, he has installed solar panels that he built himself on the roof. They are wired to inverters. Along with helping power other areas of his shop, the panels run a completely off-grid aquaponics system with LED lighting (LED lights require significantly less energy than fluorescent lights). Don’s LED lighting systems can also be easily hooked straight to a solar panel, with no need for a power inverter.

Another project is the ultracapacitor he built from 2.5-volt capacitors he purchased through eBay.com. He wired the capacitors together to form three banks of 12 capacitors each, and encased the setup in a transportable Plexiglas box. You can check his Earthineer blogs if you want the technical details, but essentially each bank replaces a 9-volt battery.

The advantage over batteries is that there are no chemicals involved (they’re powered by electrostatic energy) and can operate for more than 100,000 cycles, as opposed to 1,000 for a normal battery (a potential 20-year life expectancy).

The ultracapacitor bank can be recharged by a solar panel array in about 10 minutes, and will store the energy until you are ready to use it. Unfortunately, the technology to do this yourself is still a tad pricey (unless you’re an enterprising salvager), but Don hopes that over time this type of energy storage will become more mainstream. Regardless, it is well worth considering for a “bug out” kit.

In one of his blog entries titled “The Electric Car Saga,” Don Adams discusses his various “electric vehicle projects and how they grew, mushroomed and escalated.” The first project was simply a pedal cart he purchased from Tractor Supply. He removed the pedals and added a small DC motor, a cheap controller and a 24-volt battery pack. “It had given us some of the basics in understanding where we needed to go,” he said, “but not much else useful.”

His next project entailed procuring a midget racecar frame and outfitting it with a 30-horsepower DC power entry module (DC PEM) electric motor from Germany. It was lightweight, powerful (the horsepower of the electric motor nearly equaled that of the original VW gas engine) and the starting torque was high enough that he left it permanently in second gear. Getting a vehicle that had never been licensed for the road proved impossible, though, so it was back to the drawing board.

Don sought out a licensed and tagged frame this time around, choosing to go with a fiberglass-body kit car with a VW chassis based on a 1929 Frazer Nash Roadster. This was an easy choice, as his first car was a VW Bug that he had worked on extensively. The first order of business was to remove the VW engine and replace it with the 30-horsepower DC PEM motor from the midget racecar project.

He also added a second battery pack for increased mileage—one over the rear axle, near the motor, and the other under the hood to ensure proper balance. This time he was determined that the car be roadworthy. Getting it insured was initially a problem, but it didn’t take much for the insurance company to come around. The licensing was a bit more of a challenge, though.

With patience, perseverance and several trips to the local DMV office and the state office in Frankfort, Don was granted a license. Although DMV reps he encountered wanted to help, the biggest hurdle was that there was nothing in their computer forms for an electric vehicle, as this was before the big automotive companies had begun producing electric vehicles for the consumer market.

They managed to find a workaround. One of them posed the question, “Could this be considered a rotary motor?” Don replied, “Sure, it goes round and round.” So, in essence, the vehicle was licensed as a rotary engine, even though it had no cylinders.

The inspection was also a success, although the inspector initially blurted out “What the #$%& is this thing?” upon first looking at the engine. With all the paperwork in place, it passed inspection and was ready for the road.

Although Don enjoys driving the car and showing it off, he’s almost ready to sell it to fund future projects. Look him up on Earthineer.com (as GrumpyOldMan) if you’re interested. 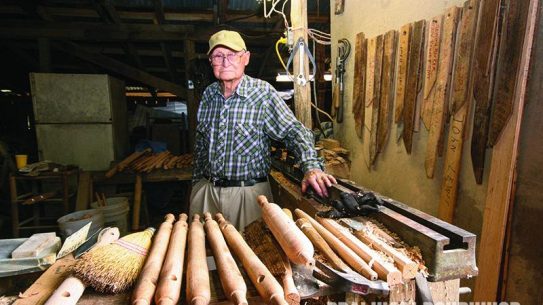 Indulge yourself in these rocking chair tidbits.