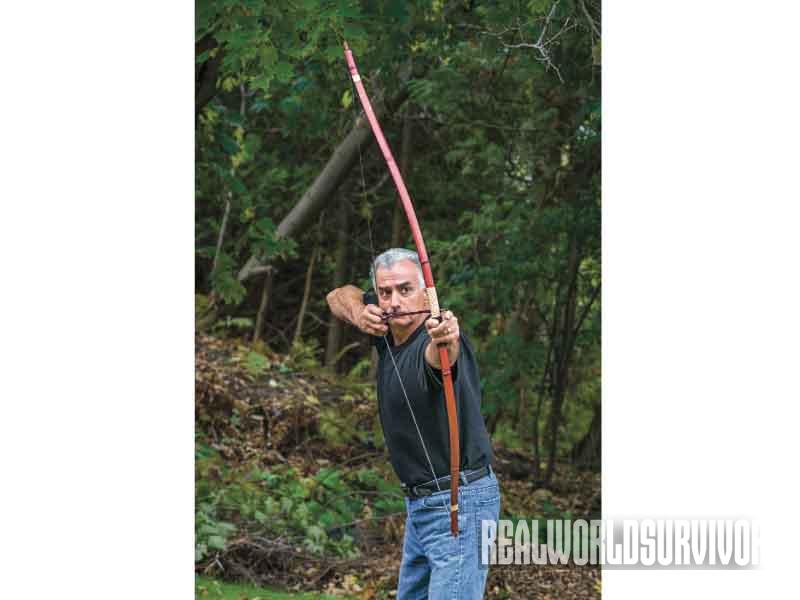 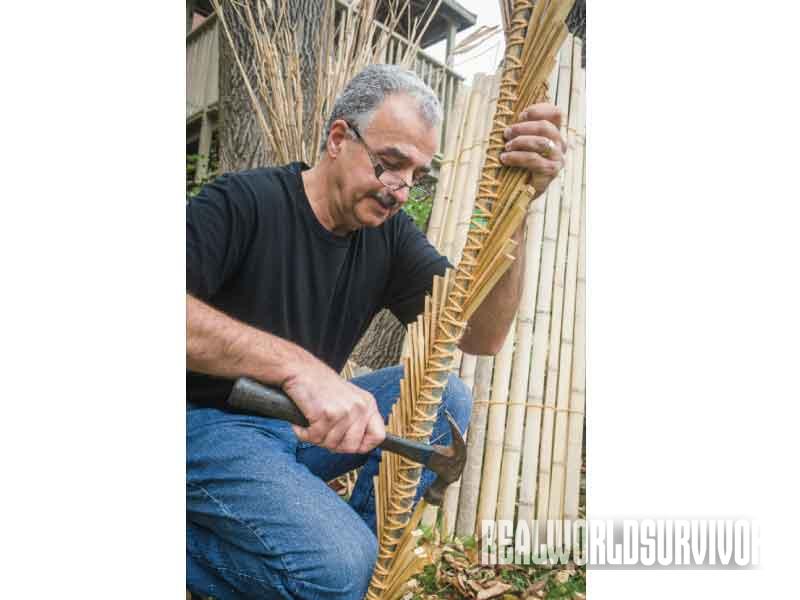 2 of 7
Steve using the centuries-old Japanese method of ropes and wedges to form the shape of the bow. 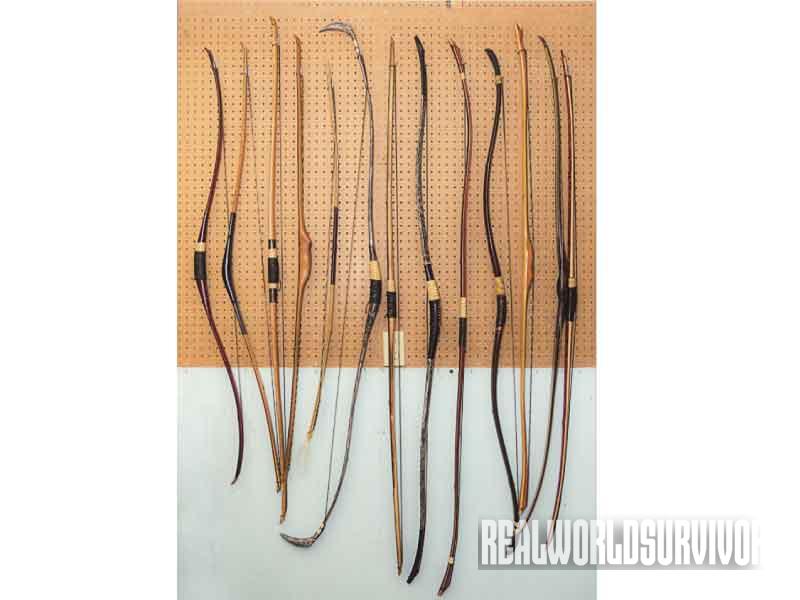 3 of 7
Steve’s Bows
Some of Steve’s bows. Fifth from the right is a replica of The Slayer of Smaug, from the movie The Hobbit, with a dragon-scale finish and dragon teeth-shaped nocks at each end. 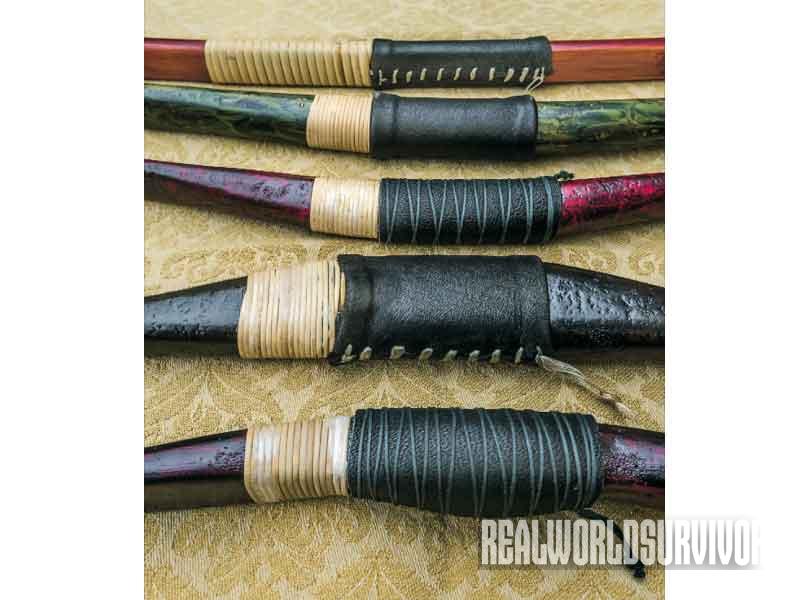 5 of 7
The grip
The grip, called a riser, is made of leather and secured and decorated with rattan wrapping. 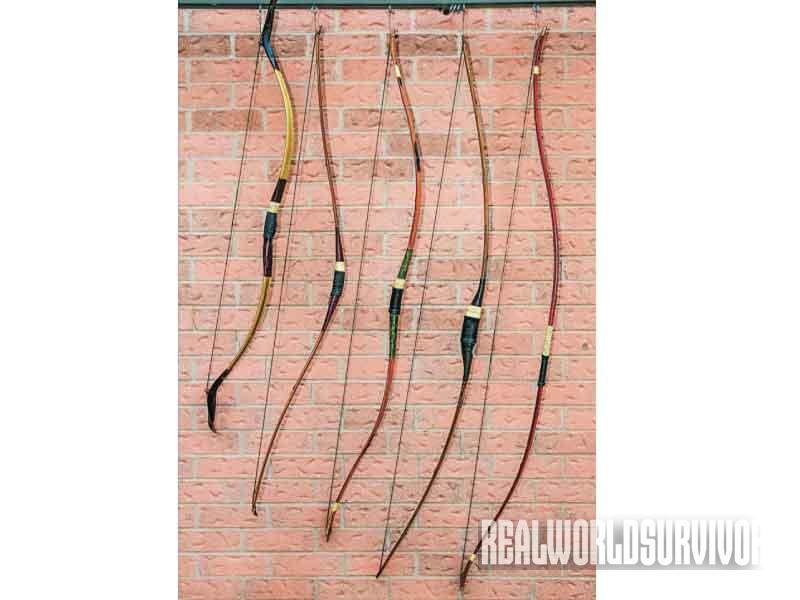 6 of 7
Steve’s Bows
Some of Steve’s bows. Fifth from the right is a replica of The Slayer of Smaug, from the movie The Hobbit, with a dragon-scale finish and dragon teeth-shaped nocks at each end. 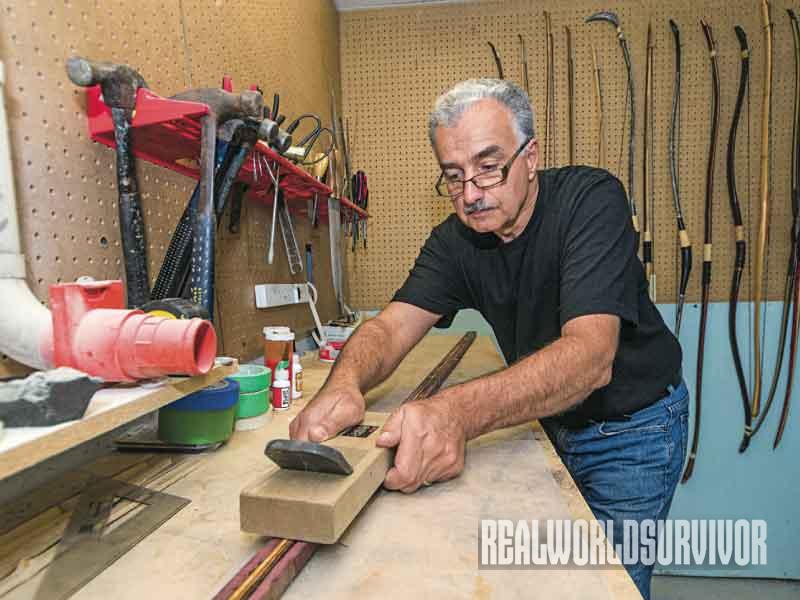 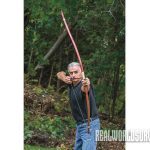 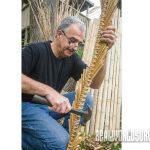 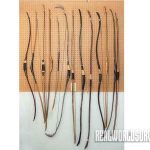 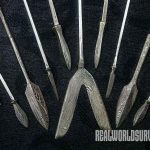 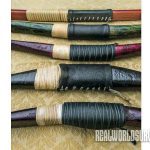 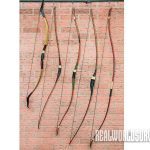 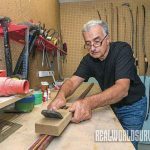 When we hear the word “pioneer,” most of us think of brave and intrepid folk in wagon trains heading west to the new frontier. But let’s not forget those equally brave folks who dare to venture into new frontiers of thinking or changing some other major area of their lives. Steve Thomson is one of these people.

Leaving the city and the office job for the country and self-sufficiency on the land takes nerve. Steve, however, was already in the country. He had a pig farm and many stuck in the city might envy him for that fact. But this was no small holding in an idyllic location. When Steve describes the rigors of managing upward of 4,000 pigs and piglets, and acknowledges the impact of advancing age, one begins to understand why the pioneer farmers of the 1800s were virtually compelled to have large families. Not getting any younger, Steve began to think about the day when pig farming might be beyond him, and yet he was not considering retirement. Not one to flee to the sunny climes and sandy beaches, our Steve.

RELATED: Pioneers of Archery: The Life & Times of the American Flatbow

Coming To Full Draw
Of all the unlikely pursuits for a former pig farmer, he decided he wanted to make bows and arrows. Not massive compound hunting bows made of fiberglass, covered with pulleys and multiple courses of strings, nor was he beguiled by the likes of the high-tech equipment and activities seen in films such as The Lord of the Rings and The Hunger Games. Not that the current resurgence of interest in archery would hurt his new enterprise. Instead, he was fascinated with bows and arrows that not only functioned but were also art in and of themselves.

The seed for this new endeavor was planted when the family made a decision to take archery lessons. The demands of the farm had to be put aside for more important family activities. For some, fun times together might have been more than enough. But as Steve described it, “Something began to stir inside me. A desire to learn more, to understand the ways of the bow and to become the best I could be.”

In addition to the sport and this newfound spiritual interest, however, an additional and just as important aspect arose. “It wasn’t just the physical part of the sport, but rather the new people I was meeting. The sport of archery draws to it a certain type of person—sincere, honest and of good character. I found this refreshing indeed.”
Steve began to learn the art of making bows and arrows in anticipation of the day when farming would no longer be an option for him. Starting in 2002, he apprenticed with a world-class bowmaker who employed the ancient Japanese method of using rope and wedges to shape the bows.

A New Life
Originally Steve’s brothers had been involved in the farm, but over time each of them had retired. And so, sadly, Steve sold the farm. He recognized that pig farming on that scale is an enterprise for the young and energetic. And too, the heart could not be denied.

He and his wife, Annette, a retired teacher, moved to a more manageable property on Chemong Lake, two hours outside of Toronto, Ontario, where his daughter Erica and sons Graeme and Colin visit often. Although nowhere near the size of his previous acreage, Steve still cleaves as much as possible to traditional self-sufficiency. He and Annette grow carrots, beets, chilies, rhubarb, asparagus, beans, snowpeas, squash, herbs and, Annette, flowers.

They keep bee hives at a nearby farm and trade honey for foraging rights, producing between 100 to 200 pounds of honey a year, which they sell to many appreciative customers (try “Honey Buzz,” it’s delicious!).

The Master’s Shop
Steve makes his bows and arrows in his basement workshop. The tools he uses are common everywhere, mostly hand tools such as rasps and files, and each bow is unique and lovingly and painstakingly made by hand. The skills he employs, however, are not. For Steve, and others like him, to achieve the level of skill required takes many years, a lot of effort and, as in any such business, learning from one’s mistakes.

To obtain the raw material, each year he travels to the southern U.S. where his mentor lives and grows bamboo specially suited to the manufacture of these bows. It is sun-dried for a minimum of two years and then sawn into strips. Staying true to the ancient rope and wedge technique, Steve now makes a wide variety of laminated longbows and recurved bows, including the North American Osage self-bow.

He also makes the different types of arrows required out of bamboo, fletches them (puts the feathers on the arrow, which keep it flying accurately) and puts on the points, some of which are Damascus steel and beautiful in their own right. The strings for the bows used to be animal sinew, silk or hemp, but now a manmade, low-stretch fiber is employed.

These are not just wall-hangers, though. During the summer, Steve attends archery shows and tournaments that would be familiar to any who frequent gun shows or shoot competitively. There is simple target shooting as well as International Practical Shooting Confederation-style competitions with targets scattered along trails in wooded areas.

Passing On Traditions
Steve passes his bowmaking skills to students who come from all over the world to his workshops. These students stay for a week or more, making their own bow under his tutelage. They leave with a prized possession and what Steve describes as knowledge worth far more than gold.

Steve has a website (bowsforpros.com) and gets orders from all over for custom bows formed to the individual designs and needs of his clients. Often there is a waiting list since true art cannot bow to the demands of haste and impatience.

These bows can cost from several hundred dollars to thousands, depending on the intricacy and the cost of the raw materials. It may come as a surprise for some to discover that there is such a thing as “rare wood” in this age of global despoliation, but there are shops that sell rare woods and a small block of such can cost into the thousands of dollars.

There’s no doubt Steve would have some advice for anyone thinking of following him into his new and uncharted territory of the heart and hands, but surely it would include what he has learned along the way: “Build it well, stay true to your beliefs and infuse what you make with your heart and soul.”

Humility and generous help from other pioneers account for one’s success, too. As Steve put it, acknowledging the many who have guided him along what the Japanese call the “way of the bow” or the Kyudo pathway, “I say thank you. I hope in time I too can give back with the same generosity as you.” 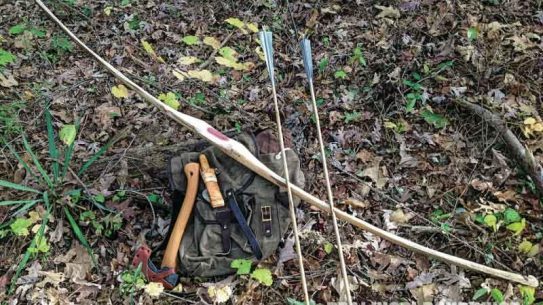 Grab your knife and hatchet and learn how to craft your own survival bow...