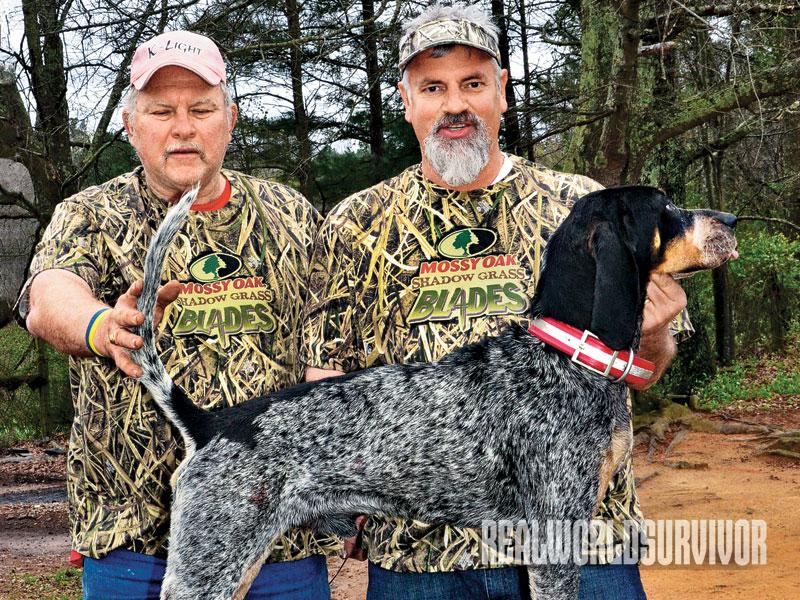 1 of 3
Keys to Raising A Cash Coon Hound
Dexter Whatley, left, and Keith Tate, right, believe in obedience training a coon dog first. This makes the dog easier to handle in the field. 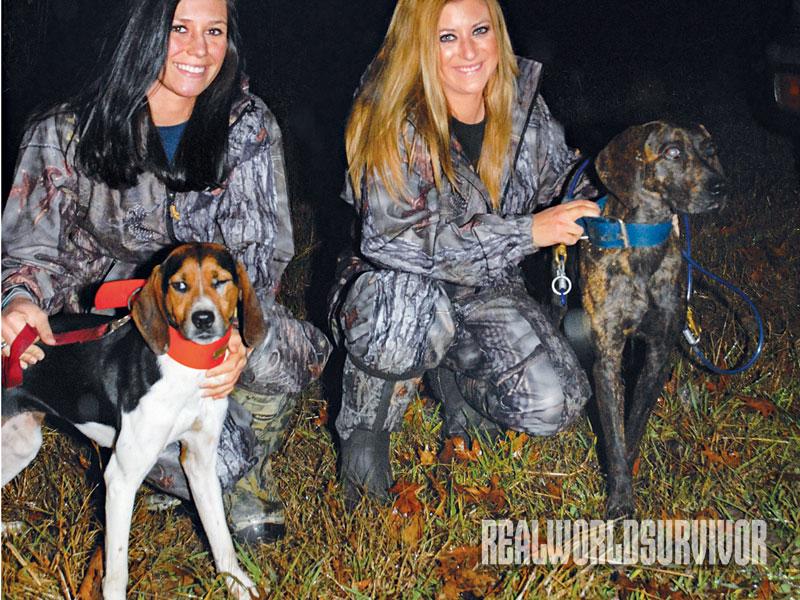 2 of 3
Keys to Raising A Cash Coon Hound
A Walker coon dog (left) and a Plot hound. The author asked one of his young coon-hunting friends, a wildlife biologist, why he took the girls he dated coon hunting, and he explained, “If a girl doesn’t like to coon hunt, she’s not going to like me.” 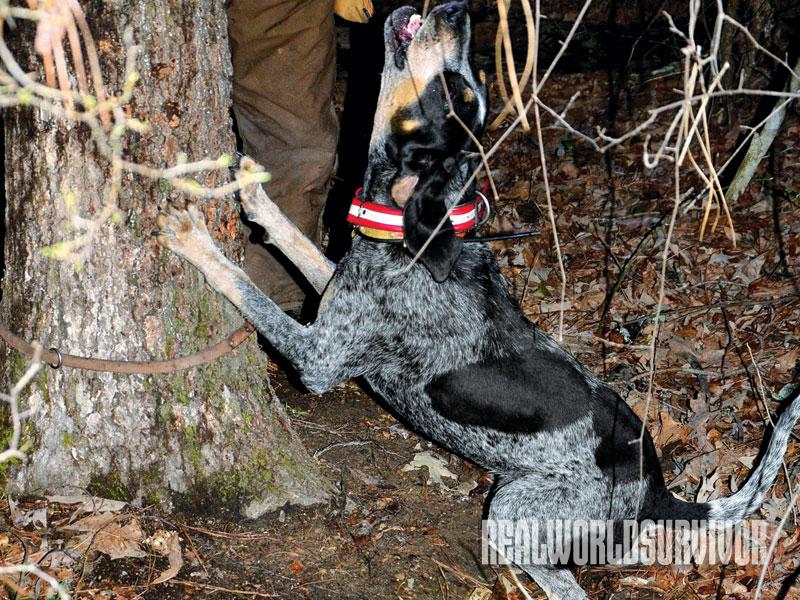 3 of 3
Keys to Raising A Cash Coon Hound
Seeing a dog with its paws on the tree, looking at the coon and barking as hard as it can and as loudly as possible is the answer to a coon hunter’s prayers. 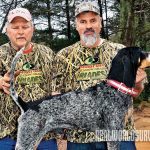 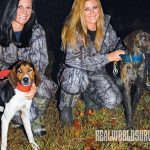 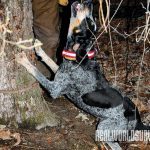 Coon dogs were essential for frontiersmen, as important to their lives as the horses they rode and the mules that pulled their plows. Corn was a primary staple, providing a cash crop and essential food for livestock. The pioneers quickly learned that one of the problems with raising corn was that raccoons loved it and would come from great distances to feed on it. Left unchecked, coons could wipe out a farmer’s corn field by climbing up the stalks and/or bending over the stalks of corn and then eating that corn. Because of this, most frontiersmen had at least one coon dog.

Pioneers also learned that coons, when prepared properly, provided tasty meat for dinner. The farmer could make the coon pelts into hats and sell the coon hides to fur buyers to make extra money. Another more important money-making ingredient in having and raising coon dogs was that the pups and the grown, trained dogs had great value. In a fledgling, developing society, coon dogs were bought, sold and traded just like other commodities.

A wide variety of coon-dog breeds, then and today, included the English Fox Hound, the Bluetick Hound, the Redbone Hound, the Walker Hound and later additions of the Plott Hound from Germany, the Cur (a mixed breed of dogs) and the American Leopard Hound or Catahoula Cur. Many coon hounds had as their ancestors dangerous game hounds used to trail and bay Russian boar, bears and mountain lions in Europe. Mixed-breed dogs had good noses, could follow a coon trail and were tough enough to fight and kill a coon that jumped out of the tree to attack.

Coon hounds were often multi-purpose dogs used to find, bay and catch free-roaming cattle and hogs, and hunt other game like squirrels, rabbits, deer, mountain lions and bears. Generally, some straight coon hounds (dogs that only would trail, chase and tree coons) were kept around the homestead, too.

As better methods of predator control and removal evolved, our country became more civilized, the family farm faded from existence and farmers had little need for coon dogs, squirrel dogs and other dogs that could follow tracks and bay wild animals. But today this country has a hardcore group of coon hunters who love the sport of finding and taking coons with dogs, selling pelts, eating coon meat and raising, training, swapping and selling coon dogs. As a result, the prices of quality coon dogs have continued to rise.

During the still nights, high on the tops of hills all year, men will sit and listen to that pure, sweet country music made by hounds with bawl and chop mouths. These tough hunters cross creeks, swim rivers and crawl through briars in pursuit of their prize. Often, modern-day coon hunters, like Dexter Whatley of Bivins, Texas, hunt, raise, train and sell coon dogs for a part-time income. In many states, you can run coons with dogs all year long but you only can harvest coons during coon season. Whatley has been raising, training, showing, buying and selling coon dogs for more than 50 years.

“I guess I got my love for coon hunting from my Grandpa Maxie and my Uncle Bernice Echols,” Whatley explained. “Grandpa Maxie coon hunted, and Uncle Bernice hunted coons and hogs. In my primary job, I’m an industrial mechanic for International Paper, and also I’m a licensed professional auctioneer.”

Competitive coon hunters believe winners produce winners. The best pups from award-winning coon dogs with a long lineage of Grand Nite Champions are so expensive that most people only can afford to buy part interests in those dogs, much like horse breeders buy a quarter, a third or a half of a race horse.

“I knew of one pup that had triple Grand Nite Champions in its bloodline that sold for $6,000 cash to two brothers, and their bet paid off. The dog, House’s Lipper from Marshall, Texas, won many events and was in the Treeing Walker Hall of Fame. His stud fee of $1,000 was considered astronomical. However, the pups of House’s Lipper sold for $1,000 a piece at birth, regardless of the female bred to him. Personally, I’d rather own part of a really, really great coon dog than all of a mediocre coon dog,” said Whatley.

Whatley reminds us that a coon hunter can enjoy going out at night and hunting coons with his buddies with that great dog, go to competition hunts and watch his dog win. He also will receive fees from the dog at stud, and for selling the pups sired by this dog. A really great coon dog can produce thousands of dollars for his owner, prestige in coon-hunting circles as well as a multitude of great nights of coon hunting for the owner and his friends.

“Today, I own part interest in about 12 coon dogs,” Whatley explained. “I started off with what most people would call country coon dogs and was primarily a pleasure hunter, turning the dogs out and letting them hunt. But a good coon dog always has been a smart investment for a farmer.

“Later, I bought a dog named Hammer Five out of a sire that had a reputation of being a good coon hound, bred his pup Curly to some other really good coon hounds, and started raising, training and selling pups to farmers and coon hunters who just wanted to know, ‘Will that dog tree a coon?’ to solve their problems.”

RELATED STORY: 7 Ways To Protect Yourself When A Dog Attacks

At that time, a good pup sold for $25 to $30, which was big money for Whatley. The people buying his pups used them to keep coons out of their agriculture and to harvest coons to sell their hides, which in turn were worth $20 to $30 each.
A coon hunter who bought one of Whatley’s pups could start taking that coon dog hunting within a year and take 100 coons in a season—making $2,500 in the process and keeping the coons out of his agriculture. He consistently could make that $2,500 per year for the next five to eight years, the lifespan of that dog, producing $15,000 for the hunter and saving the hunter an equal amount of produce that would have been destroyed by the coons. However, since the average coon hide only sells for $10 today, not very many coon hunters hunt coons for their hides.

But Whatley mentioned, “One young man, who helps me train dogs, earns $3,500 to $4,000 yearly from the coons he harvests that are treed by his coon dog, and another $10,000 to $12,000 from the fur he traps. For the most part, most of the coon hunters I know now prefer to competition hunt, pleasure hunt, breed dogs and raise pups.”

This article was originally published in the AMERICAN FRONTIERSMAN ™ issue #174. Subscription is available in print and digital editions here. 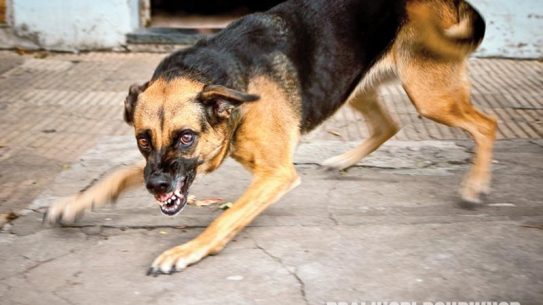 7 Ways To Protect Yourself When A Dog Attacks

Here's a few ways to defend yourself if a dog decides to attack you.