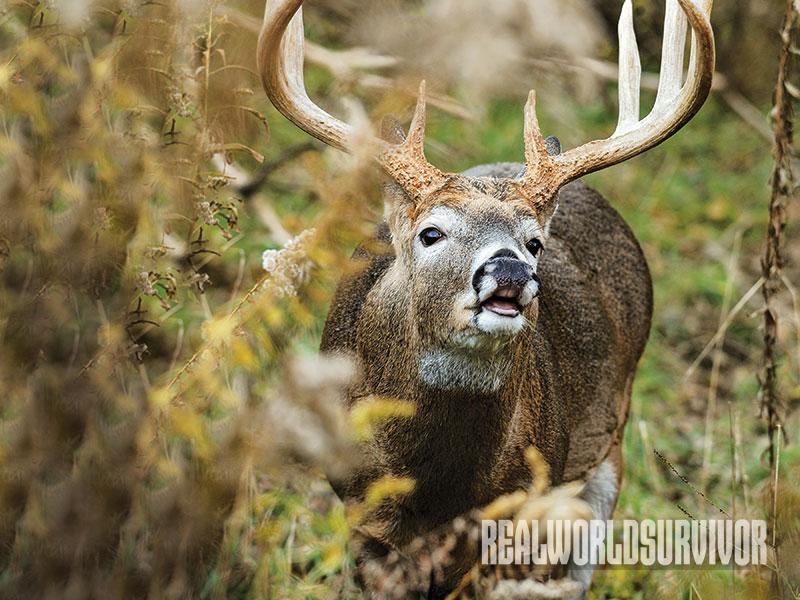 1 of 9
Photo by Charles Alsheimer
Mask Your Scent When Hunting Deer
Looking to hunt deer? Here are some easy ways to mask your natural scent. 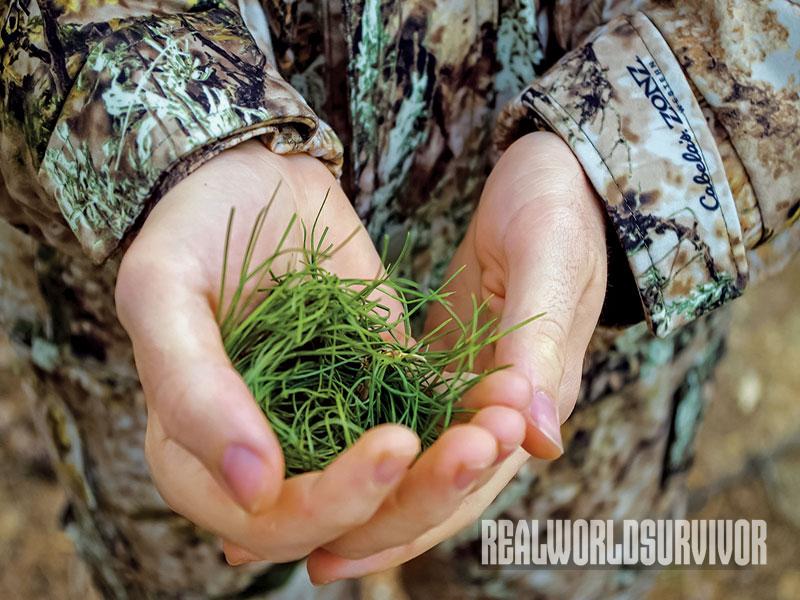 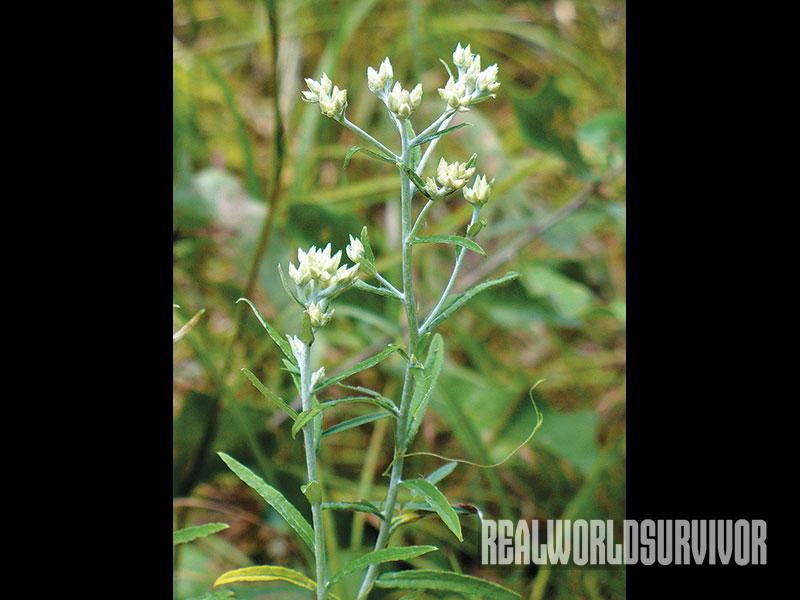 3 of 9
Photo by USDA, Jeff McMillian
Mask Your Scent When Hunting Deer
The aromatic leaves and flowers of rabbit tobacco have been used as masking scents since at least the 18th century. 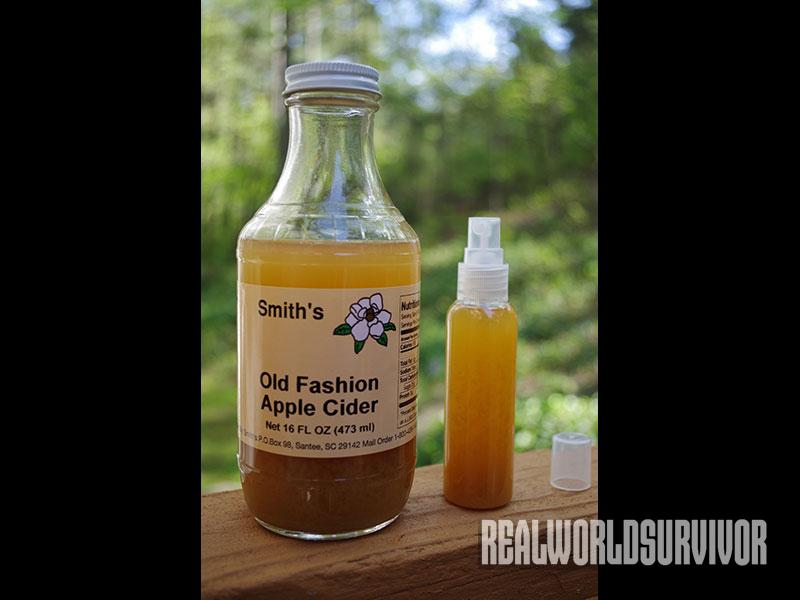 4 of 9
Photo by Keith Sutton
Mask Your Scent When Hunting Deer
Where apple trees are common, hunters often use apple juice or apple cider as an inexpensive cover scent. 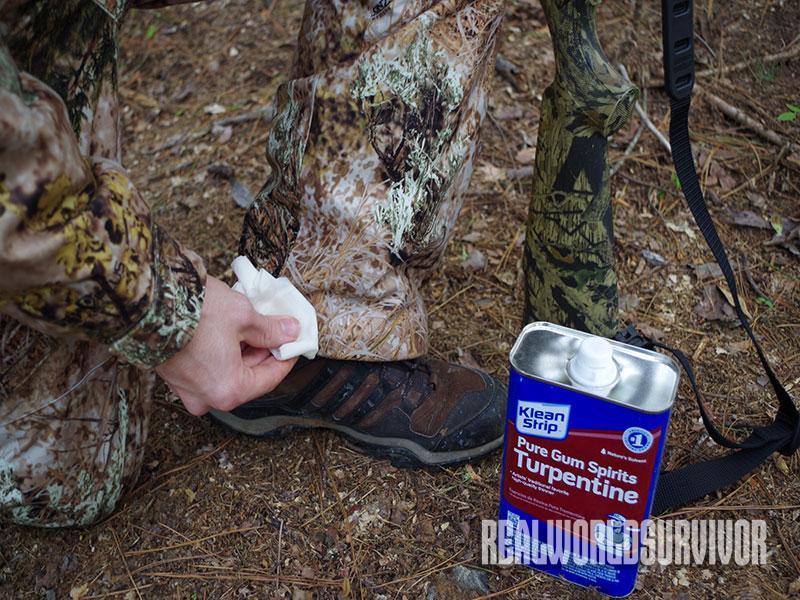 5 of 9
Mask Your Scent When Hunting Deer
Turpentine can be used to mask a hunter’s scent as well. A small amount can be applied to boots, pants and other clothing, but too much of this strong scent can make deer steer clear of you. 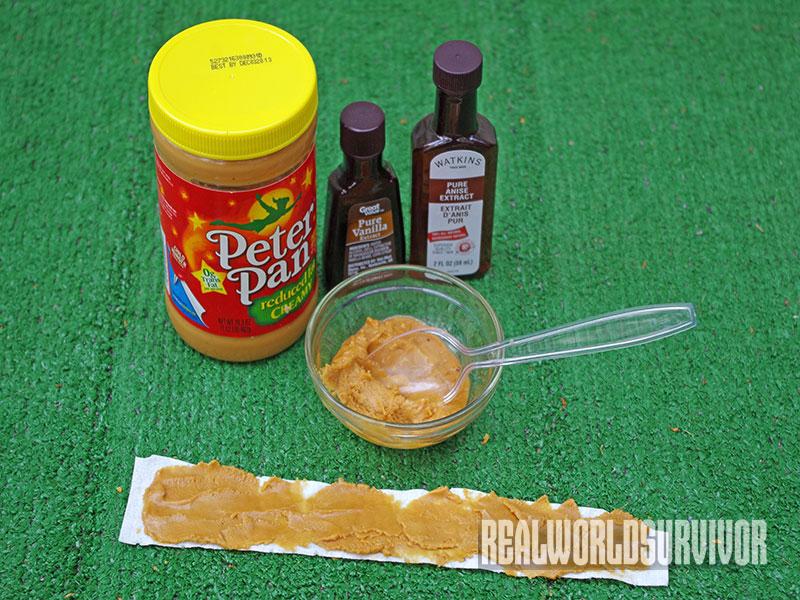 6 of 9
Photo by Keith Sutton
Mask Your Scent When Hunting Deer
Southern hunters often concoct their own masking scents. One effective recipe is a mixture of anise extract, vanilla and peanut butter. 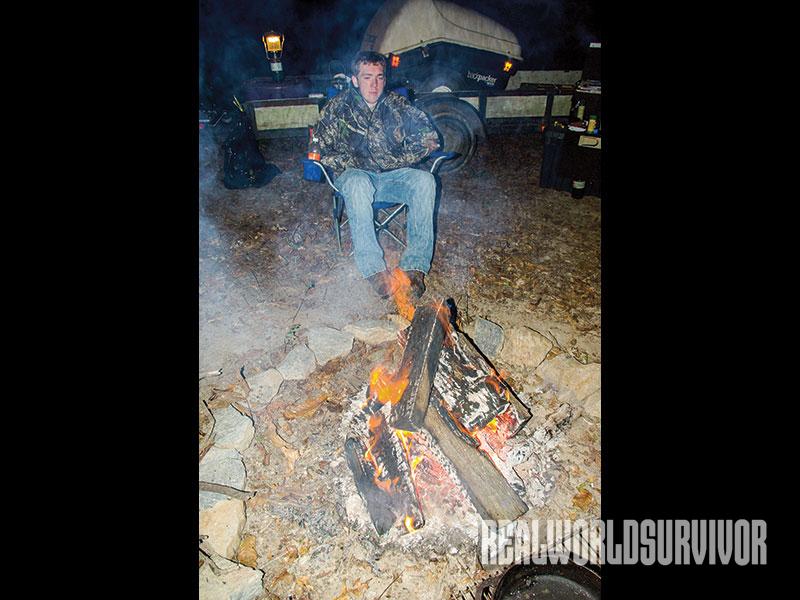 7 of 9
Photo by Keith Sutton
Mask Your Scent When Hunting Deer
Hunting clothes saturated with the odor of campfire smoke help cover the hunter’s scent so deer are less likely to notice him. 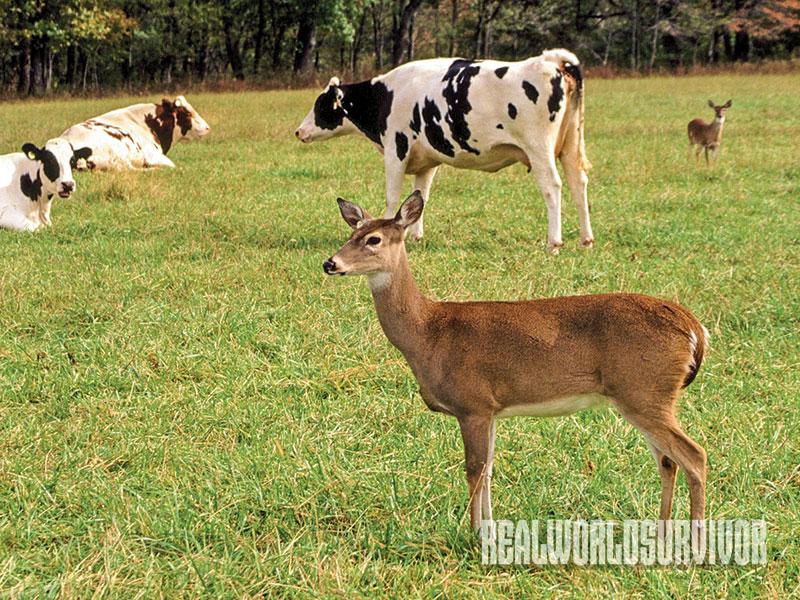 8 of 9
Photo by Keith Sutton
Mask Your Scent When Hunting Deer
Deer don’t have a natural fear of cattle or other livestock, a fact that led hunters in decades past to hang hunting clothes inside a barn to absorb the odors of the farm animals. 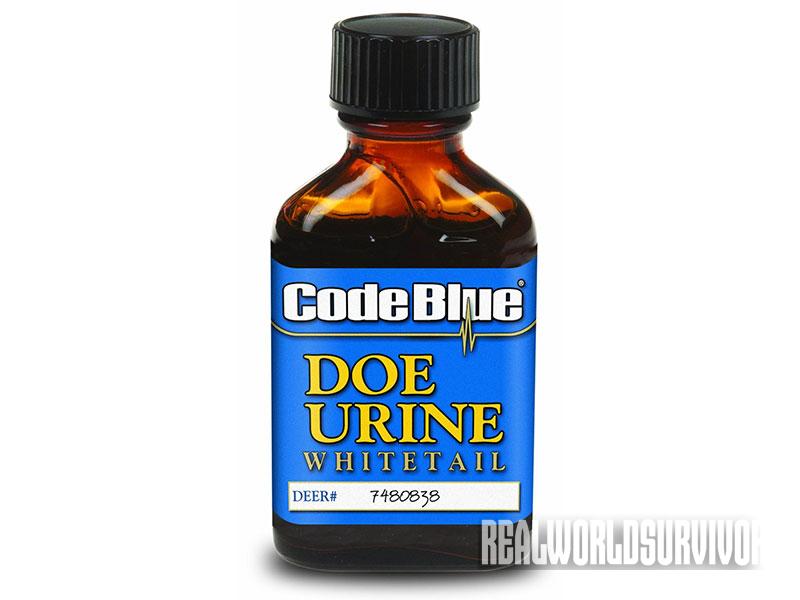 9 of 9
Photo by Code Blue
Mask Your Scent When Hunting Deer
Deer urine is collected and sold as a cover scent for hunters, but can be collected for use when a deer is being field dressed or butchered. 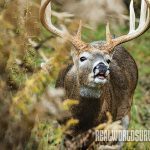 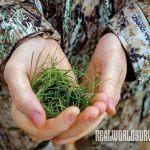 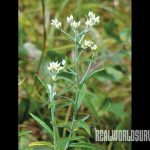 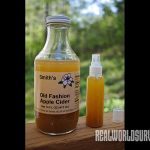 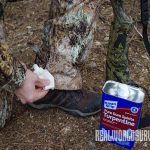 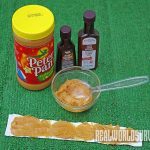 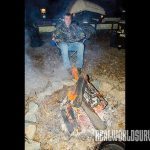 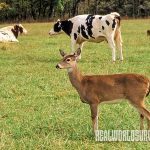 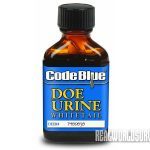 The big buck appeared like a phantom. He was huge, his neck thick with the rut and his wide 10-point rack readily visible in the morning sunlight.

From my stand 15 feet above the ground, I watched as the magnificent whitetail stepped out of a thicket, looked around, lowered his head and began slowly moving my way. My heart skipped a beat. I raised my rifle, found the deer in the scope and waited for him to present a good broadside shot through the trees. In a few seconds, his route would take him through a clearing about 75 yards from my perch.

After just a few steps, however, the heavy-bodied deer snapped his head up, snorted and quickly disappeared back into the thicket. I hadn’t moved, hadn’t made a sound. The morning breeze was blowing directly in my face. The buck was gone, however, and once again I was I left to wonder what went wrong, and to marvel at the whitetail’s uncanny sense of smell.

If I’ve learned one thing during 45 years of hunting whitetails, it’s this: If you want to be consistently successful in your hunting, you need to learn all you can about that incredible nose and then devise ways to negate that powerful sense. Researchers at Mississippi State University found that a deer’s sense of smell, like a dog’s, can be anywhere from 500 to 1,000 times more acute than a human’s. Furthermore, scientists say that whitetails have thousands of sensitive receptors in their nostrils, which they use to sort out up to six smells at one time.

When conditions are just so, the deer’s sense of smell can be even more acute. Leonard Lee Rue III, one of the country’s most respected deer experts and author of The Deer of North America, observes that days with high humidity (between 50 and 70 percent), a temperature between 50 and 70 degrees Fahrenheit and with a light breeze blowing provide ideal scenting conditions for a buck. “Under such conditions, I believe a deer could detect a human’s scent from at least one-half mile or more,” he said.

That’s why, since man first started hunting deer centuries ago, hunters have known that killing a deer will be difficult unless ways can be found to defeat the animal’s keen sense of smell. One way that’s been accomplished is the development of masking scents that obscure human odors and make it less likely the quarry will flee before the hunter can shoot.

There are literally hundreds of excellent commercial cover-scent products marketed for today’s deer hunters, and there’s no reason at all you shouldn’t use these if you like. But if you enjoy do-it-yourself projects, you also might want to try lesser-known masking scents free for the taking or easy to make at home.

Hunters have long employed pine needles to conceal human odors. Using them is as simple as picking a handful of fresh needles from a live tree, breaking and rubbing them between your palms and then wiping the juice on your hunting clothes. Foliage from cedars, firs, balsams and other evergreens also work, but hunters always should use types found in the area where hunting will take place.

One experienced whitetail expert with whom I hunted decades ago went a step further in his use of pine as a masking scent. He would stuff a jar with fresh pine needles, add denatured alcohol to cover and then seal the jar and allow the needles to steep for several weeks. When the resulting concoction was applied to skin or clothing, the veteran deer man said, the alcohol would quickly evaporate, leaving only the pungent smell of pine. I can’t testify to the effectiveness of his home-brewed scent, but the woodsman used it every time he hunted deer and killed many trophy bucks.

Another masking scent long used in piney-woods country is turpentine, a liquid obtained by distilling resin gathered from live pine trees. Turpentine oil or essence, available from some aromatherapy companies, can also be used. Just a few dabs on your boots, pants and other clothing should do the job. Be careful not to use too much, though. Turpentine has a strong odor and overuse could make deer steer clear of your hunting zone.

Weed ‘Em Out With Rabbit Tobacco

A medicinal plant called rabbit tobacco was used as a cover scent by settlers and Native Americans as early as the 18th century. A handful of the plant’s aromatic leaves and flowers was gathered, crushed and wadded into a tight ball that was placed in clothing or beneath a hat band. Rabbit tobacco grows in proper habitat from Manitoba to Nova Scotia and south to Texas and Florida. Deer within its range are accustomed to its sweet, fragrant smell. Look for it growing in dry, open areas such as old fields, logging roads and abandoned home sites. The plant stands 1 to 3 feet high and has narrow leaves that are dark green on top and silvery-gray beneath. Rabbit tobacco also goes by the names sweet balsam, cudweed, featherweed, sweet everlasting and poverty weed.

When hunting in areas where apple trees are common, some hunters mask scent by cutting an apple in half and rubbing the juicy side on their clothing. Another method is spritzing your clothes and the area around your stand with a squirt bottle full of apple cider. Apples and apple products not only cover your scent but may attract deer as well.

Using plants and plant products isn’t the only way to mask human scent. Many years ago, hunters often smoked their clothes and equipment over campfires to destroy human scent. (Deer often smell smoke and don’t react unfavorably to its odor.) A rack with a crossarm above the fire was made from saplings, and the clothing was hung on this while wet moss or leaves were added to the fire to create dense smoke. You needn’t go to the trouble of building a rack. Just wear your hunting clothing while sitting in front of a smoky fire to help mask your scent.

Deer have no fear of cattle and other livestock, so when hunting around ranches where these animals were raised, the hunters of yesteryear often hung their garments in the rafters of a barn where the farm animals were fed or tended. This imparted the familiar scent of livestock to the clothing, thus camouflaging the hunters’ own scent.

Many of today’s hunters use deer urine. It’s not only an excellent masking scent but a good lure to use during the rut, especially when hunting scrapes. A supply is easily obtained by removing a deer’s bladder when field-dressing the animal, being careful not the spill the contents on the meat and emptying the urine in a freezer bag or jar. It stores well in a freezer between hunting trips, but be sure to mark the container clearly so the contents won’t be mistaken for soup stock!

Fox and raccoon urine have long been used as cover scents as well, and can be obtained from local trappers or purchased from trapping supply companies. Both have a strong natural odor common to most deer habitat that won’t spook whitetails when they smell it.

You can use urine to lay down a long-lasting trail cover by putting some in an empty medicine bottle that has a squeeze applicator. Before you walk to your stand, use duct tape to secure the edges of a thick gauze pad or piece of cloth on the bottom of your boot. Saturate the cloth with several drops of urine, then every 100 steps or so, lift your boot and rescent lightly with more urine. When you reach your stand location, remove the boot pad, resaturate and hang on a low bush or branch a short distance from your stand. A slight breeze is enough to distribute the strong odor of the masking scent, allowing it to act as a natural cover in the area around you.

Remember, no matter how effective your masking scent may be, you still must hunt with the wind in your favor. Even the best cover scent won’t hide all human odors. You must remain unseen and unheard as well. Also, understand that masking scents are an aid to hunting success, not a shortcut. You still must use other skills and proven techniques.

Nevertheless, using masking scents will help you operate in a deer’s territory while reducing the chance its radar-like nose will detect you. And when pitting ourselves against animals whose senses are much keener than ours, we need every bit of help we can get. 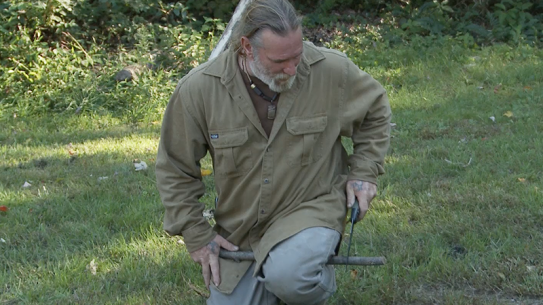 VIDEO: Dave Canterbury Explains How To Saw with a Plumber’s Vise

Don’t hurt yourself when you’re sawing in the wild—use the safer, smarter plumber’s vise....