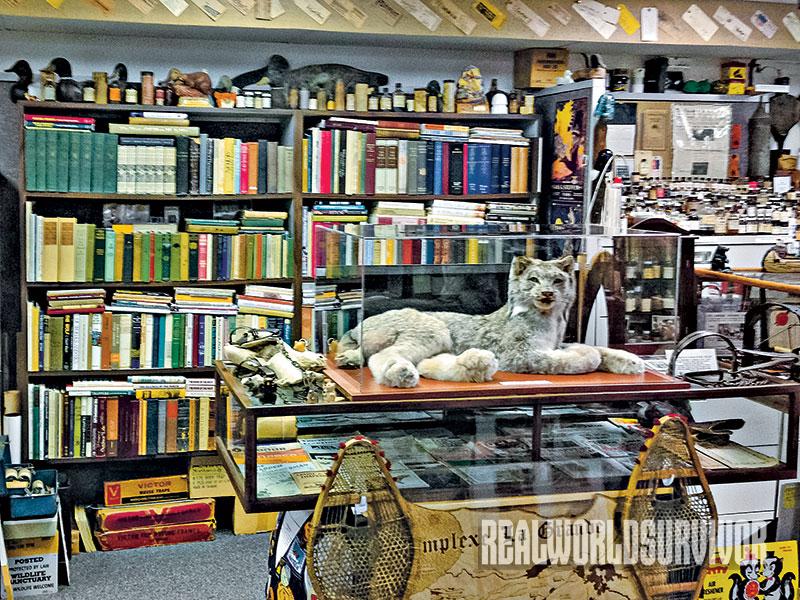 1 of 5
Photo by Tom Parr
A full mount of a lynx in a glass case at the Trap History Museum, with books about trapping on shelves in the background. 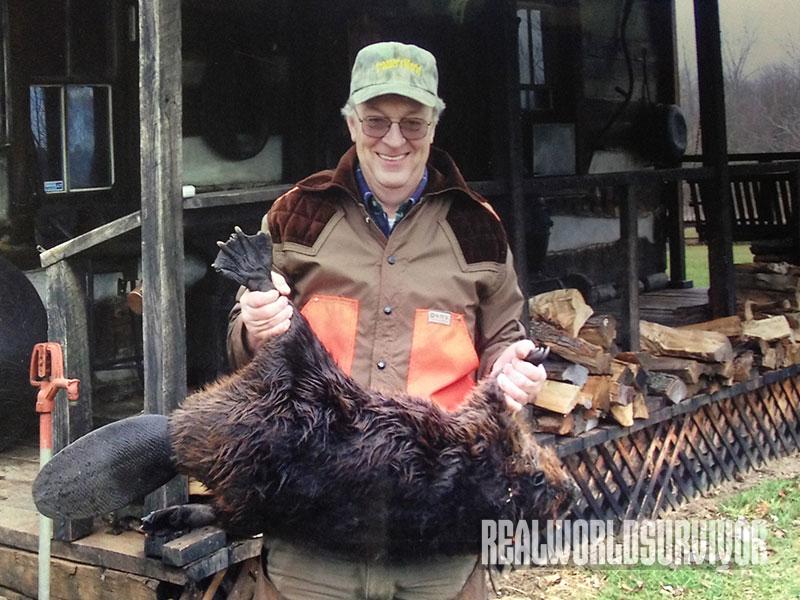 2 of 5
Photo by Tom Parr
Tom Parr, who is curator of the Trap History Museum, with a beaver he trapped. 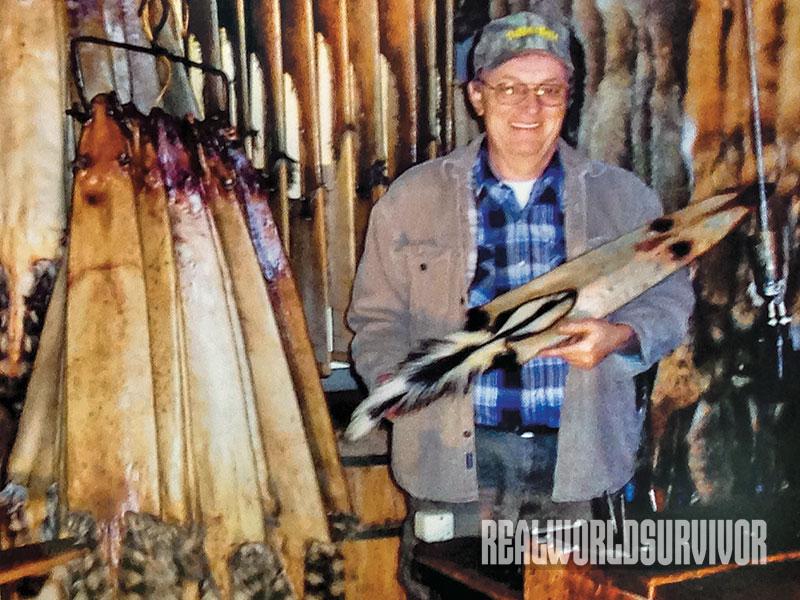 3 of 5
Photo by Tom Parr
Tom Parr with some of the furs he trapped during 2012. He’s holding a pelt from a skunk, which were valuable in the 1920s. Hides from raccoon, red fox and coyote are in the background. 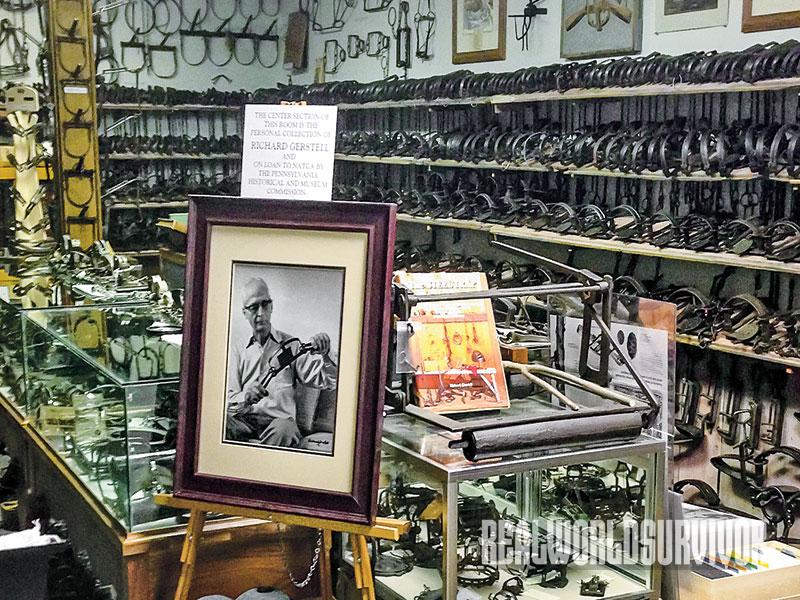 4 of 5
Photo by Tom Parr
The Newhouse room of the Trap History Museum. 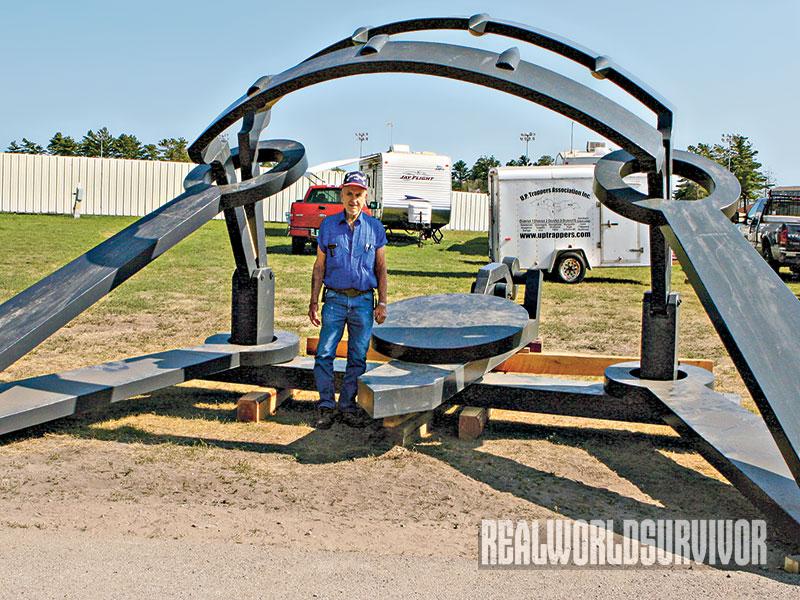 5 of 5
Photo by Tom Parr
 A man more than 6 feet tall is dwarfed by the largest trap in the world that is on display at the Trap History Museum in Galloway, Ohio. 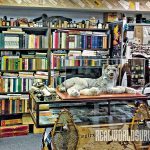 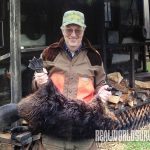 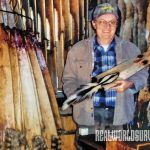 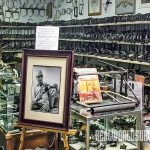 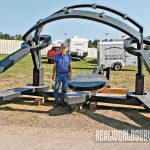 If you are interested in trapping, trapping history or collecting traps, set your sights on the Trap History Museum in Galloway, Ohio. Over 5,000 traps are on display at the museum, including the world’s largest trap, and, best of all, there’s no admission fee to take advantage of the educational opportunity the museum provides.

The huge trap on display is a recent addition to the museum. The device weighs an estimated 2 tons and dwarfs a large man. The enormous trap is the creation of Ed Sauvola from Chassell, Michigan. He made the device about 11 years ago, and it was a fixture in front of the Keweenaw Kountry Store until it was transported for display at the 2014 National Trappers Convention. Part of the time the trap was on display in Chassell it had a full-size snowmobile in its jaws. The trap was so large it had to be disassembled and carried on a flatbed truck to the convention.

Undertaking the project was “just for fun,” Sauvola explained, “I wanted a bear trap since I was a kid. Since I couldn’t afford to buy one, I decided to make it. This is what I ended up with.”

Tom Parr is the curator of the Trap History Museum. When he saw Sauvola’s huge trap at the trapper’s convention, he knew it would make a great addition to his museum, so he bought it.

Traps aren’t the only type of equipment employed during the fur trade that are featured at the museum. All types of equipment that trappers rely on are also on display, and so are the fur-bearing animals that are essential for trapping. There are full mounts of critters like wolves and lynx. Tanned hides from other furbearers are on display, too.

Parr’s passion for trapping helped create the museum. “I started trapping in my teenage years,” he said, “and I really enjoyed it.”

None of Tom’s family or friends trapped, so he picked it up on his own by reading as much as he could about the subject. His trapping career started with a road-killed opossum.

“I had been talking about my interest in trapping to my friends,” Parr said, “so they dared me to skin that road-killed opossum, and I did it. Then I bought some traps to start trapping local ditches for muskrat. It didn’t take long before I was trapping mink and other animals, too.

“As I got older, I got married and became a fireman and then a paramedic. My wife and I sold medical supplies for a number of years, too. Those jobs took me away from trapping for about 15 years.”

Parr’s interest in trapping was rekindled in 1987. “I decided to collect some of the old traps,” Parr said. “Then I got involved with the North American Trap Collector’s Association. I became president of the organization in 1991 and have held that office ever since.”

The museum was a natural extension of Parr’s trap collecting, and it has been in operation since 1995. When Tom’s interest in trapping was renewed in 1987, it wasn’t limited to simply collecting traps. He got back into trapping, too.

He really enjoys coyote trapping, but also makes sets for muskrat, mink and raccoon. He also does some nuisance trapping to get rid of problem animals for homeowners and businesses. Parr also does some contract trapping for a couple of airports to control coyote populations on their grounds.

“In regard to the museum, I’m frequently asked, ‘What’s your favorite trap?’ That’s constantly changing,” said Parr. “Today, my favorite trap is the St. Louis Killer. It’s a trap that looks like an alligator’s mouth. It was designed to trap everything from a turtle to a fox. The trap was never successful.”

One of the benefits of visiting the museum is it’s possible to see trap designs like the St. Louis Killer that never made it to the market, in addition to those that are/were successful and were used by trappers in the past as well as those that are in use today. One hundred and fifty of the traps on display in the museum, for instance, are on loan from the Pennsylvania Historical and Museum Commission from the late Richard Gerstell’s trap collection. Gerstell worked for the former Animal Trap Company of America as chief of research from 1946 to 1948.

According to Parr, the Animal Trap Company of America, which used to make all types of traps, became the Woodstream Corporation in 1966. He said that the company still makes cage-type live traps, but in 1999 sold rights to their foothold traps to the Oneida Victor Company in Euclid, Ohio. Oneida Victor is one of the largest manufacturers of foothold traps in the world. They also make body-gripping traps.

Gerstell wrote a book titled The Steel Trap in North America, which was published in 1985. This book is the trap collector’s bible, according to Parr. When Gerstell passed away, his collection of 2,500 traps went to the Pennsylvania museum, but they only put three of them on display.

“I got some of the best pieces from Gerstell’s collection on loan from Pennsylvania,” Parr said. “Some of them are one of a kind.”

The five rooms that make up the museum are the Newhouse Room, the Modern Trap Room, the European Trap Room and the Mouse Trap Room, while the final room is devoted to showcasing tools of the fur trade, animal baits, books about trapping and more.

“The dog-proof trap did for raccoon trapping what the Conibear Trap [body gripping] did for muskrat trapping,” Parr said. “Conibears made it simpler to catch greater numbers of muskrat. Frank Conibear, from Victoria, British Columbia, started working on the design in 1935. His traps didn’t really catch on until he sold the design to the Animal Trap Company of America in 1958.”

NEWHOUSE: The Newhouse Room is devoted to traps made by a religious community
from the 1850s to 1925. Sewell Newhouse was a member of the Oneida Community and a trap maker. He passed his skill on to other members of the community until they became one of the largest trap makers in the world. The community got out of the trap-making business in 1925, selling their product line to the Animal Trap Company of America in Lititz, Pennsylvania.

EUROPEAN: The European Room is dedicated to a line of traps that were developed before those in North America. “They had an issue with rabbits in Europe,” Parr said, “so they developed a number of traps for catching rabbits. Traps made in Europe were also heavier and bulkier than those used in the U.S.”

There are about 100 traps in the European Room, some of which were donated to the museum by Andreas Jendritzki. Traps in the European Room serve as a reminder of how fortunate we are in North America to have the freedom to trap. Parr said most residents of Europe are no longer able to trap like they did historically. In fact, most citizens from those countries are prohibited from trapping.

Most people are familiar with North American furbearers that were popular historically, such as beaver, mink and ermine. Others are a surprise.

“The hot animal to trap in the 1920s was skunk,” Parr said. “Everybody was a trapper in the 1920s. In those days, one skunk was worth a week’s wages at the factory. The most valuable skunk was one that had a white star on its head and the rest was black.

“Today you can make more money on skunk essence than you can from the hides. Skunk essence sells for $10 per ounce. Skunk pelts sell for about $5. Skunk essence is used in perfumes,” said Parr.

MOUSE TRAP: If you are into mousetraps, don’t forget to check out the Mouse Trap Room. There are more than 2,000 mousetraps on display of all different designs, with both European- and American-made mousetraps present.

To get directions to the museum, go to traphistorymuseum.com. The museum is normally open from 7:00 a.m. to 8:00 p.m., but it’s a good idea to call ahead (614- 878-6011) to make an appointment if you know when you will be in the area. The museum may be closed if Tom Parr is out of town at a trapper’s convention. 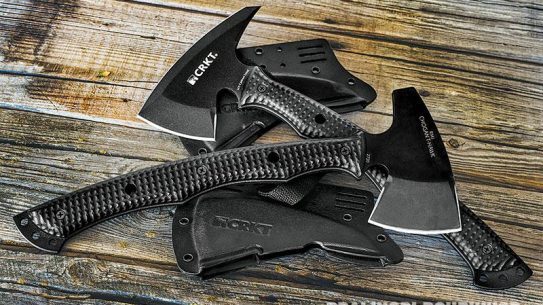 Find the Tomahawk Just For You

From survival tool to hard-edged defense, tomahawks deliver lifesaving results in the backwoods!