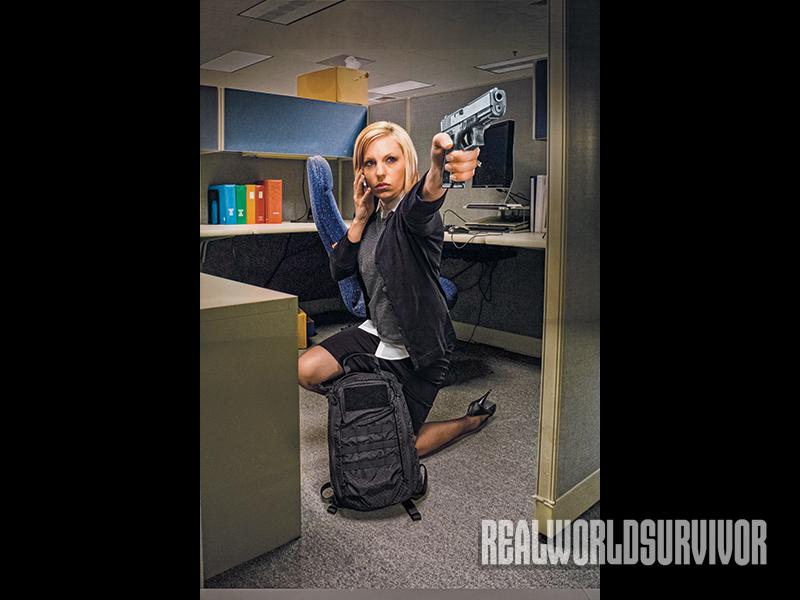 1 of 4
Photo by Straight 8
Prepare yourself for possible threats at the workplace. 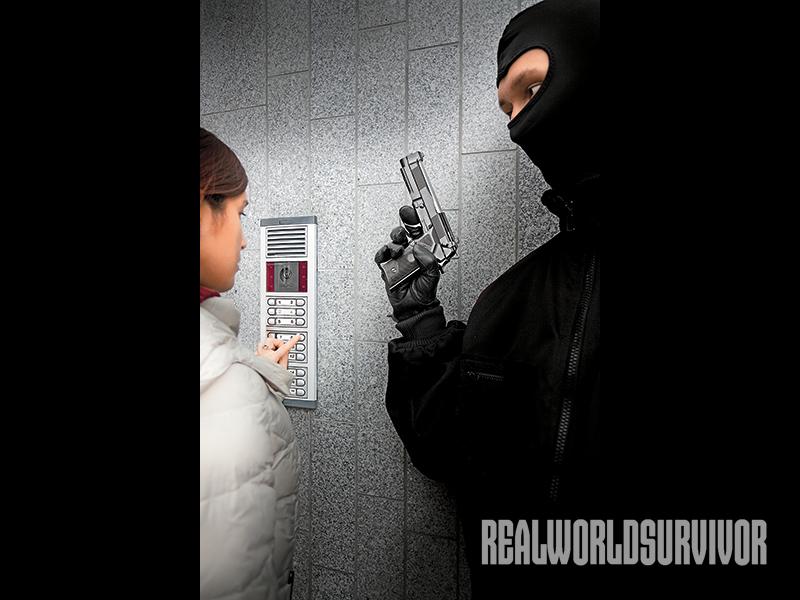 2 of 4
Photo by Shutterstock
Staying alive starts with being prepared, even if a gun is pointed your way 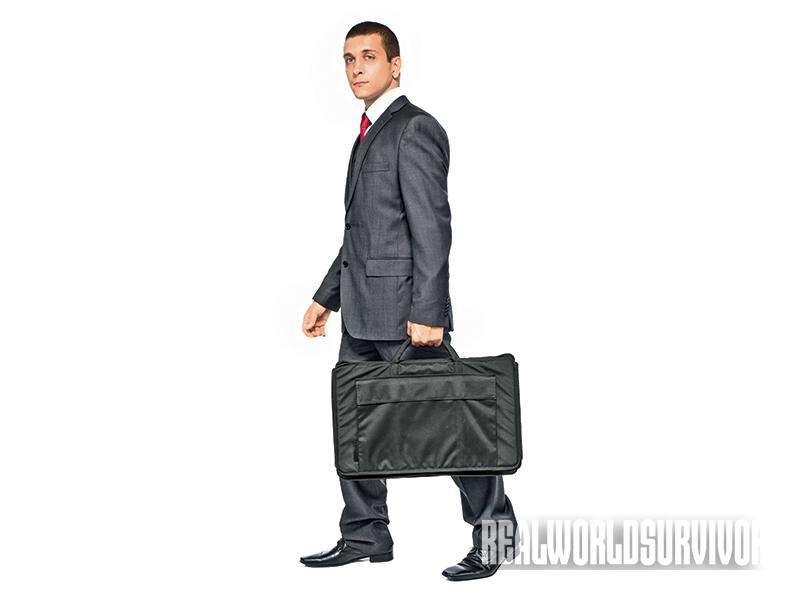 3 of 4
Photo by MARS Armor
The Ballistic Briefcase from MARS Armor deploys in seconds, offering four armor plates rated for up to Level IIIA protection. 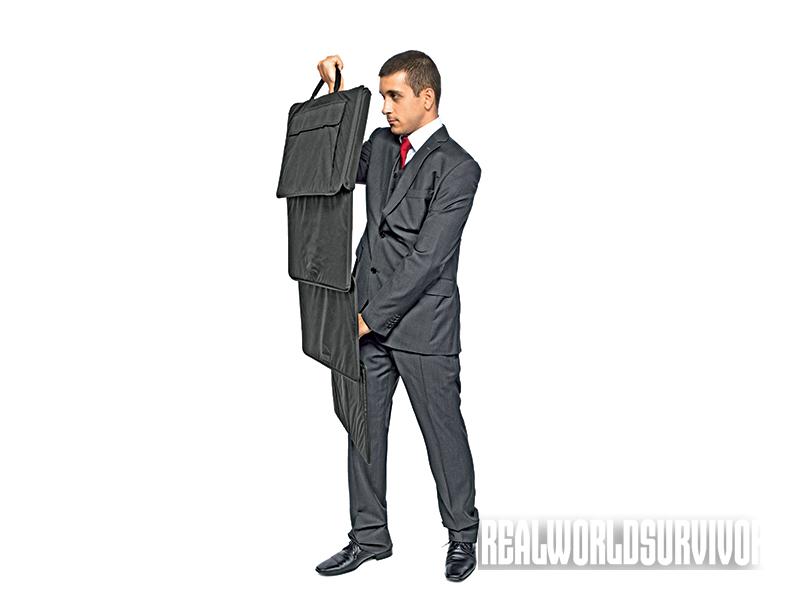 4 of 4
Photo by MARS Armor
Fully deployed, the Ballistic Briefcase measures 22.25 by 45.7 inches, making it easy to cover your most vital areas in the event of a gunman’s attack. 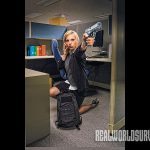 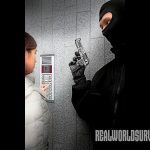 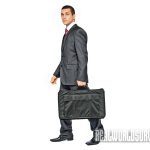 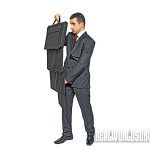 The name Patrick Sherrill probably doesn’t ring a bell, but the phrase he inspired certainly will. On August 20, 1986, Patrick walked into the post office where he worked armed with two 1911 pistols, a .22 LR handgun and about 300 rounds of ammunition. Without saying a word, Patrick walked up to his supervisor and shot him in the chest. He then proceeded to go on a 10-minute rampage, killing 14 co-workers and wounding six. He eventually turned one of the guns on himself and the term “going postal” became synonymous with workplace violence around the world.

Lone gunmen like Sherrill are what most of us think about when we hear the term “workplace violence.” We think of a crazy, disgruntled person who wants to shoot the boss who just fired him. But with the recent shootings at the Charlie Hebdo offices in Paris, it’s important to realize that workplace attacks can also be coordinated terrorist events and not just the angry loner. Because of this, it’s critical that we’re prepared to survive any and all types of attacks that may take place, and that we set up our workspace to increase our odds of survival.

For example, how many workers do you think give a lot of thought to how their desk is positioned and which direction they’re facing? You and I know how important situational awareness is, so we need to ensure our backs are not to any potential threats. You should face the door to see who’s coming and going, and, if you’re in a cubicle in the middle of the room, do what it takes to see down the hallway so you can see who’s approaching.

What’s more, make sure your workspace is set up so that you can easily escape the area. If your office is so cluttered that you’d trip over 10 boxes trying to make your way out, then that obviously needs to change. If you’re backed into a corner of cubicles and it would take you precious seconds to weave through the maze to get to the exit, then perhaps you can move to a different location.

I realize that most employees don’t have a lot of say about moving their office to a new location or rearranging the floor layout. However, most of us do have control regarding what we keep at our desks. So once you’ve done as much as you can to strategically position your desk, then it’s time to focus on what items you have for protection while you’re working at your desk on a daily basis.

I personally carry a gun to work every day, but that’s easy for me to do since I’m self-employed and I make the rules. If you’re allowed to carry a gun, I would certainly do that. Pocket carry and ankle carry are two great choices for work since a lot of folks worry about someone seeing a gun on their hip throughout the day. If you are going to pocket or ankle carry, consider a Ruger LCP, a snub-nose revolver, a Glock 42 or a Sig P238. If you don’t want to have the gun on you and you wish to store it inside your desk, then definitely put it in a rapid-access safe, like the GunVault MV-500.

Another tool that is critical to have for protection, and that’s much more likely to be allowed at work, is a knife. You can keep one clipped to your pants pocket, or you could even leave several knives in various desk drawers. If you really want to be prepared, you could wear a knife on your ankle. Personally, I’ve got several knives throughout my office, like those made by TOPS and Benchmade. For more economical knives, check out the offerings for Mora Knives.

Once you’ve assembled numerous protection items, it’s time to think about the use of cover and how to protect yourself if bullets are flying and you’re unable to get out of your work area. Obviously, if you’ve got solid-wood furniture in your office, that makes excellent cover and you’d want to hide behind that. But many workers don’t have fancy wood office desks that will shield them from bullets, so let’s look at what you can use instead.

I personally carry a bulletproof panel in my laptop bag. It’s a Level IIIA panel, which means it stops handgun rounds up to .44 Magnum. The vests that most police officers wear are Level IIIA to give you more of an idea of this panel’s resistance. If I ever find myself under attack, I plan to grab my laptop bag and cover my vital areas with it, all while hopefully being able to quickly take down the threat with my gun. If you’re interested in getting a panel for yourself, make sure and check out a company by the name of AR500 Armor, which makes all types of bulletproof panels for laptop bags, backpacks and more. Besides a panel, there are several other options for bulletproof items at your work area. One of them is a bulletproof clipboard. You can leave the clipboard at your desk all day long without anyone being the wiser. Since it’s on your desk, you won’t have to dig through any drawers to quickly protect yourself. Another item developed by a company called HighCom Security is a bulletproof insert for your iPad or tablet case. These offer Level IIIA protection and come in sizes ranging from 7 by 10 inches up to 9 by 16 inches. This Civilian Armor ranges from wall and door panels to custom cuts for backpacks and more. HighCom also makes ballistic blankets that can be rolled up in your desk, to save space, and then quickly taken out and thrown over your body for protection.

One of my favorite bulletproof items is a ballistic briefcase that completely unfolds, giving you about 3.5 feet of protection. In other words, one moment it’s a regular briefcase and the next it’s completely unfolded into one large ballistic shield. Several companies make a version of this briefcase, including Leison Global and MARS Armor. According to MARS Armor, it takes less than two seconds to have its bullet-resistant case expand out to its full length.

When you take time to think about it, you and I are very fortunate to live in a time where there are so many options we can use at work to protect ourselves. But it all begins with preparation, so that if the time ever comes when we find ourselves in a potentially deadly situation, we’re able to react accordingly. While it might be a little uncomfortable, when you go into work tomorrow, ask yourself the following question: If two gunmen burst through the door right now, what are the exact steps I would take to survive?

Look at your workspace and see if it’s strategically setup, and then get as many protection tools as your company allows to help make sure you’ll always go home to your family. Don’t forget, the more prepared you are, the more likely you’ll be able to help others and save innocent lives if violence suddenly erupts around you. 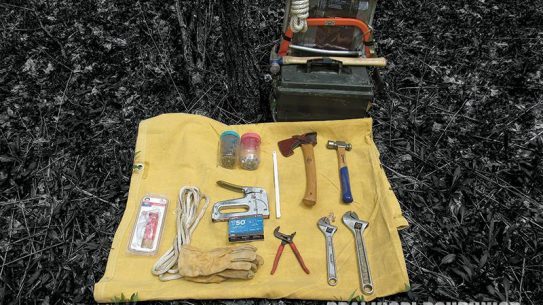 5 Quick Ways to Prep For A Disaster

Be prepared to face disaster with these quick, life-saving tips.