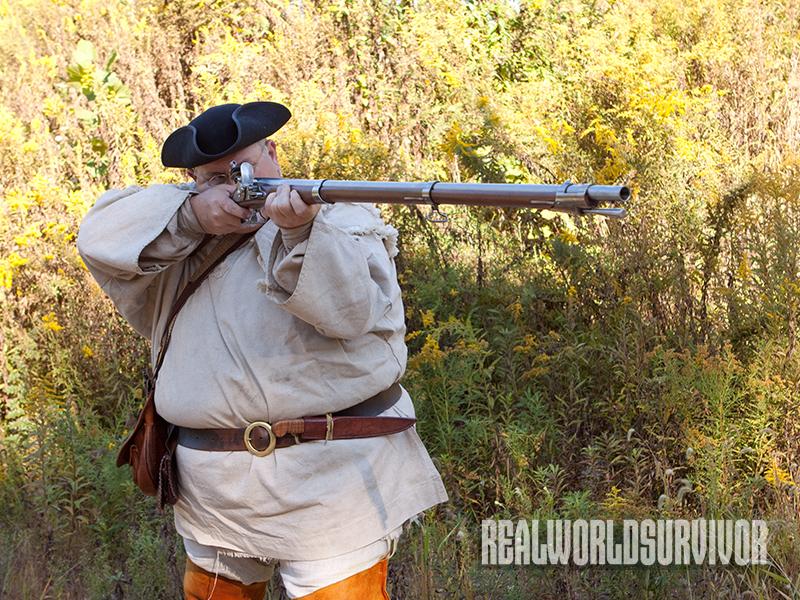 1 of 4
The author gives the Taylor’s Charleville musket a workout. 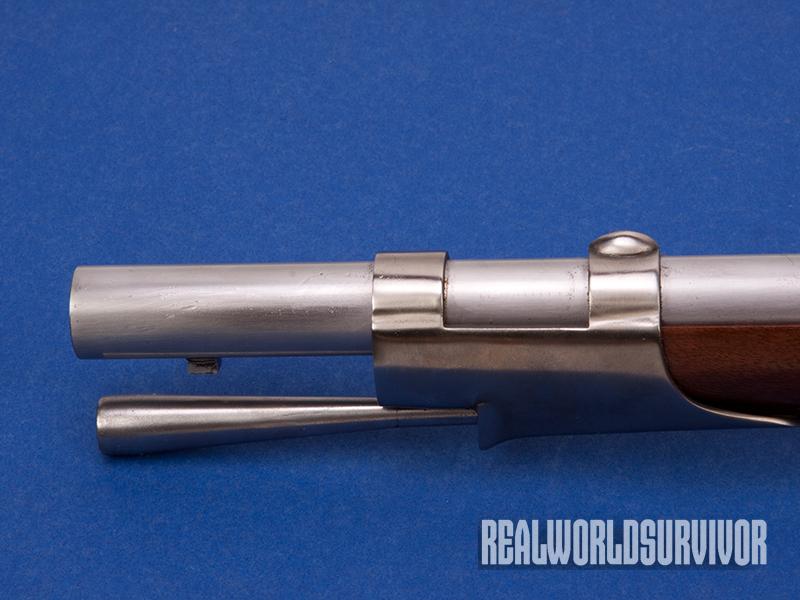 2 of 4
The front barrel band on Taylor’s Charleville has a crude, integral front sight, which makes this gun great for civilian use. Many military muskets of the period had no front sight at all. 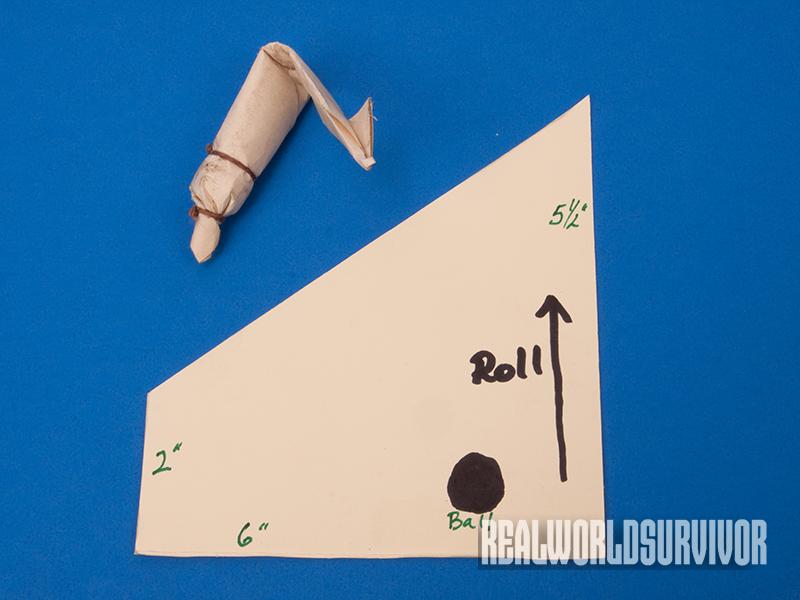 3 of 4
The fastest way by far to shoot a muzzleloader is with military-style paper cartridges. It’s not the most accurate way, just the fastest. This template shows the dimensions for the paper shell of a Charleville cartridge. 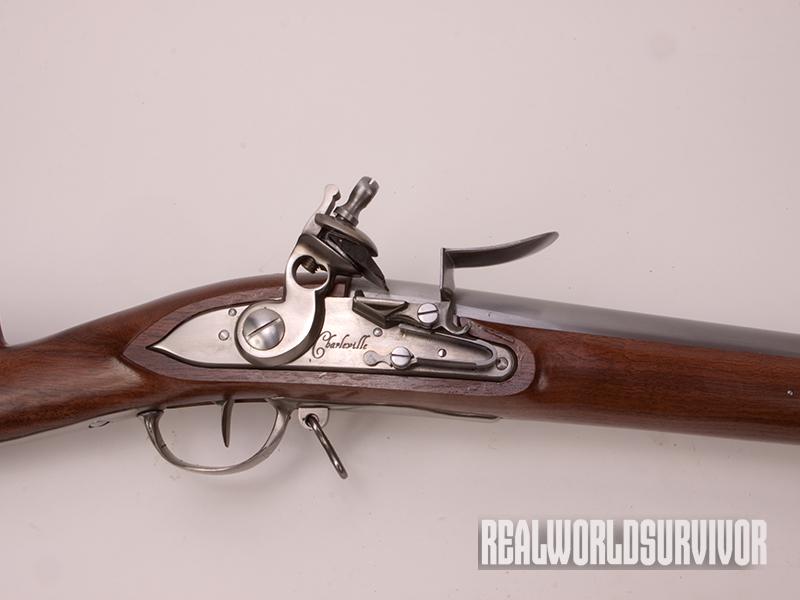 4 of 4
The Charleville’s lock is massive. It will stand up to lots of hard use. 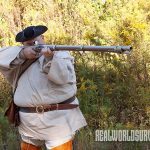 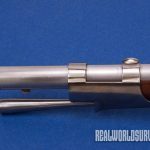 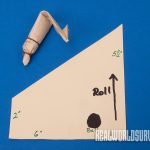 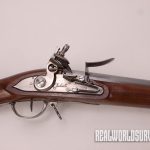 Though we are a nation of riflemen, not every long gun on the early American frontier had grooves in the barrel. Rifles were accurate at long ranges, but they were expensive pieces of gear. A good rifle could cost a hard-working longhunter the better part of a year’s earnings. A properly set up smooth-bored gun that is carefully loaded will give most rifles a run for their money in the accuracy department out to 100 yards.

The combination of relatively low cost and decent practical accuracy made smooth-bored guns a wise choice for frontiersmen. Records from trading companies show that even professional hunters, after a poor season, sometimes sold their rifles and bought less expensive smooth-bored guns to get the funds to re-outfit themselves for the next year’s hunting expedition. Though colonial gunsmiths made their share of excellent smooth-bored fowling pieces for the civilian market, there was another source of guns for the budget minded—military surplus.

My father was a Vermont farmer after World War II. His first centerfire rifle was a 1917 Enfield in .30-06, and most of his friends had Mausers or Springfields. Back then, you could buy military surplus rifles out of a barrel in the hardware store for $10 or $15, so just about every farmer had one. It was the same in the 18th and 19th centuries.

At the end of the American War of Independence, the Continental Congress disbanded most of the Army by furloughing entire units. Congress gave the soldiers some of their back pay, but the cash-strapped congress couldn’t meet the whole expense. So, to placate the men, congress allowed them to keep their guns, uniforms and any Army equipment in their possession. Most of those guns were sold as soon as the former soldiers got home, to raise a little cash so they could get their farms going again.

That put thousands of surplus muskets into civilian hands, and many of them made their way to the frontier. The most common firelock brought home by the disbanded troops was the French Charleville musket. France was our principal ally during the revolution, and the French government provided thousands of these guns to the cause. The Charleville became the official long arm of the Continental Army, and it had a profound influence on United States military weapons for the next 50 years.

Taylor’s & Company, in Winchester, Virginia, has an excellent replica of the 1766 model Charleville musket, and I was lucky enough to get one to test. I’m not a military re-enactor. My interest lies with civilian frontiersmen, but a military gun like this is very appropriate for a civilian out on the frontier. In fact, if you are on a budget and you are interested in re-creating a wide range of time periods, this gun can be used from the last third of the 18th century right through the mountain man era in the 19th century.

I know some of you think the Hawken rifle was the mountain man gun. And without a doubt, Hawken’s are great. In fact, Taylor’s has a couple of fine Hawken replica rifles in its stable. But Hawkens were pricey, and there were never that many of them in the mountains. A weapon like the Charleville would have been more typical, especially early in the period.

Pedersoli manufactures the Charleville replica in Italy for Taylor’s & Co. The Charleville has a 44-inch, .69-caliber barrel that is held in place by three barrel bands. The front barrel band has an integral front sight. The flintlock itself is massive. When I saw the huge mainspring, I figured this gun would wear out flints quickly, but I was wrong. I put 50 rounds through this gun over a couple of days, and I’m still on the original flint. After shooting around 30 rounds, I had to knap a new edge, and it is still sparking strongly.

All the metal on Taylor’s Charleville is left in the white and polished, which is just the way it would have been carried by the military. The stock is a nice piece of European walnut. The wood-to-metal fit is very good, and it shoots as good as it looks. The 3.5-pound trigger pull really helps you hit where you aim despite the crude front sight and the lack of a rear sight.

Continental Army soldiers loaded their muskets using paper cartridges that contained both the ball and the powder. Paper cartridges are very fast to load. In fact, when I get into a rhythm shooting them, I can actually put rounds downrange from a muzzleloader almost as fast as I can with a bolt-action military rifle. But unlike the .30-06 ammo our Doughboys shot in World War I, the paper cartridges shot by Continental soldiers have some intrinsic accuracy issues.

The sequence when loading from paper cartridges is to bite off the end of the paper and pour some of the powder into the pan on the lock to prime the piece. The rest of the powder is poured down the bore. The problem is that unless you’re a cyborg, the amount of powder poured in the pan, or spilled on the way to the bore, will vary from shot to shot. So the actual amount of powder left to use as the main charge will be different each time you load. Also, the ball needs to be significantly undersized to get down the fouled bore. And the ball itself is tied into a paper bag that will trail out behind it in flight. None of this is a recipe for pinpoint accuracy.

But none of that really mattered to an 18th century soldier. His musket ball was just one of thousands in the wall of lead that was hurtling towards the soldiers on the other side. But unlike the soldiers, the civilians who would inherit these arms cared a great deal about hitting what they aimed at.

Though my interests don’t go towards military reenacting, I still felt that it was only fair to shoot the Charleville with paper cartridges. I used .60-caliber round balls in my official test run. Military reenactor friends of mine tell me that they get the most accurate results with .65-caliber balls in cartridges, and I believe them. But I found that even .62-caliber balls became hard to load when the bore was heavily fouled, so I elected to go with .60 for the sake of reliability.

I filled each cartridge with 100 grains of 2Fg Goex blackpowder, though how much went into the priming pan and how much went into the bore no one knows. I set up a standard B-27 silhouette target 50 yards downrange and proceeded to load and fire 15 times as fast as I could. When the smoke cleared, three rounds hit squarely in the kill zone and six more rounds left holes in non-lethal areas of the target. The remaining rounds were on the paper at least. That would have done the job in an 18th century army. 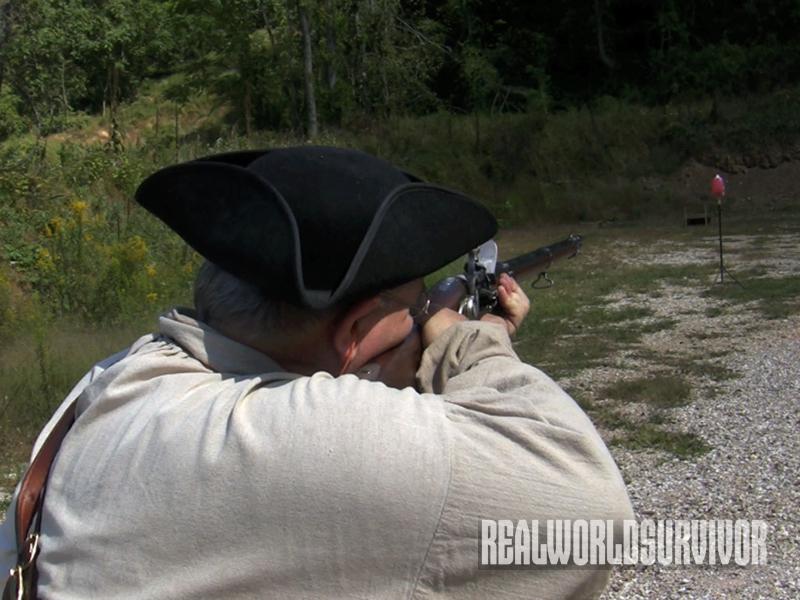 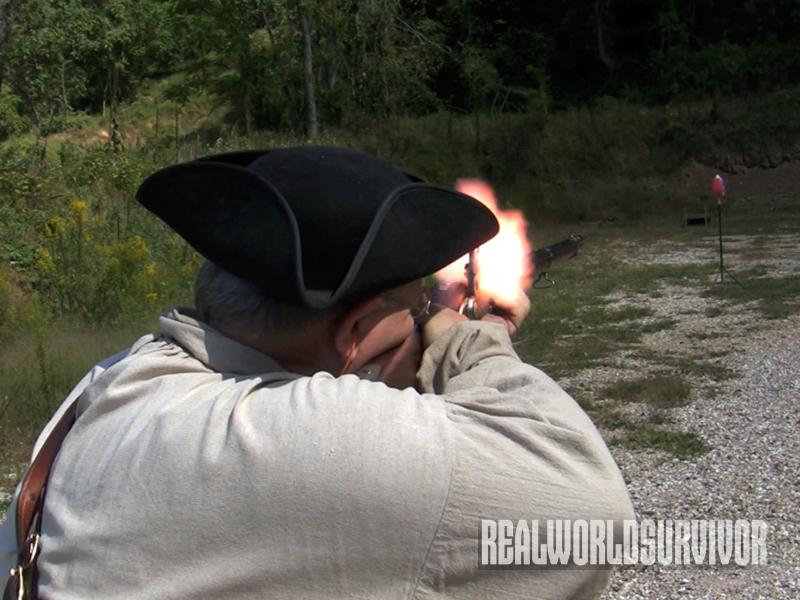 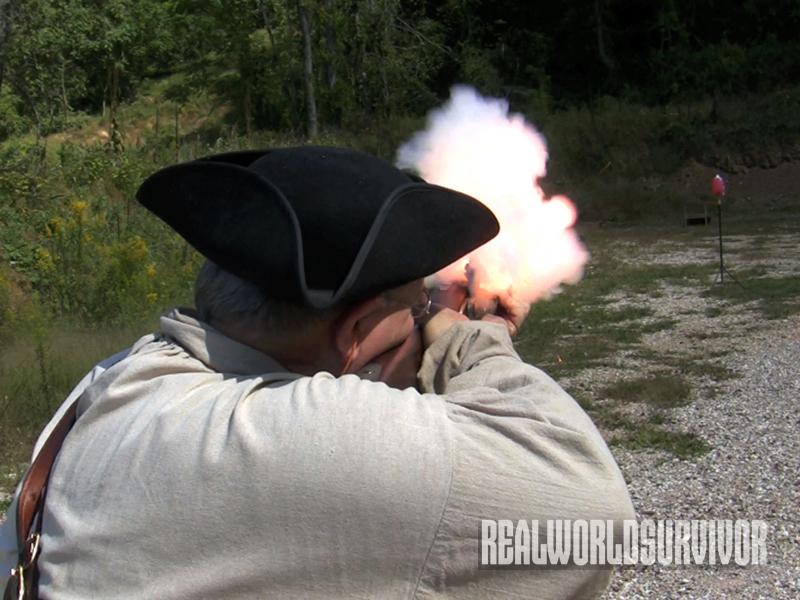 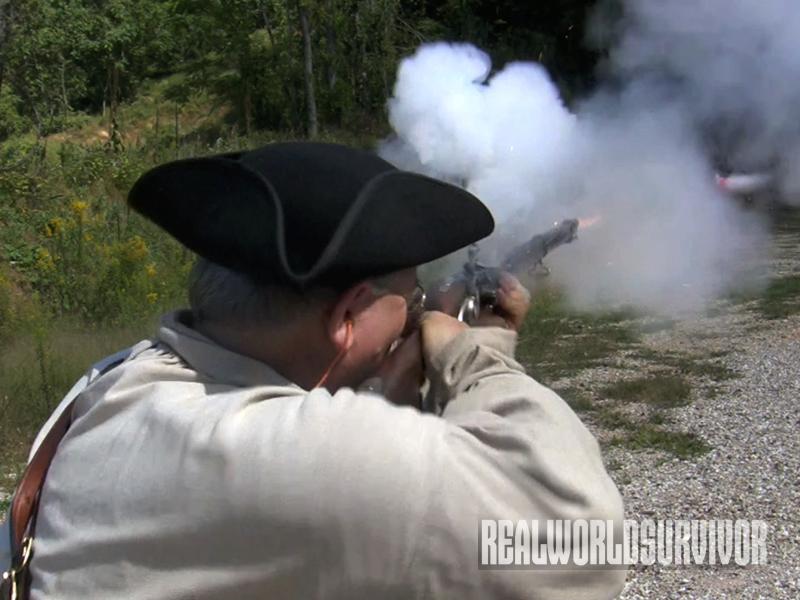 When the original Charlevilles reached the civilian market, their new owners would have loaded them quite differently. A typical civilian load would have used a .68-caliber ball over 100 grains of 2Fg powder, with a ball of tow serving as the wadding between the powder and the ball, and another ball of tow rammed over the ball to keep the ball in place. Using that load, the Charleville was able to shoot 6-inch to 8-inch groups from a 50-yard benchrest, which isn’t bad for a gun without a rear sight.

As these guns moved to the western frontier late in the 18th century and early 19th century, I think they would have been loaded more like rifles, with patched round balls. But I really doubt that they would have carried around a supply of linen cloth to use for ball patching. I think that they would have used a more readily available material: buckskin. To emulate that approach, I loaded the Charleville with 100 grains of 2Fg Goex topped by a .57-caliber ball that was nestled in a greased buckskin patch. This combination grouped almost exactly the same as the tow-wadded bare ball. From the 50-yard bench, I could shoot 6- to 8-inch groups all day long.

A benefit of having a smoothbore gun is that it can shoot shot or ball interchangeably. When you’re shooting shot in the Charleville, you have the equivalent of a cylinder-bored, 14-gauge shotgun, so you can load it with commercially produced cards and wads if you choose to do so. Personally, I prefer to load the way they would have in the 18th century.

The period-correct loading method is really simple. For wadding, I use cut paper. I cut paper strips that are 1 inch wide by 2 inches long, which are then folded in half. I punch a hole in the corner of each folded paper square. I thread a string through the holes and attach them to the strap of my shooting bag. When I load, I pour 100 grains of 2Fg blackpowder into the barrel, then I pull a piece of folded paper off of the string and ram it down on top of the powder charge. After that, I pour in 2 ounces of #6 shot and I ram a second piece of paper down the bore to hold the shot in place. This is a very effective hunting load that will kill reliably out to 40 yards.

Whether your interests are with the military or the civilian spheres of the 18th century, you ought to check out a Charleville from Taylor’s & Co. For more information, visit taylorsfirearms.com or call 540-722-2017. 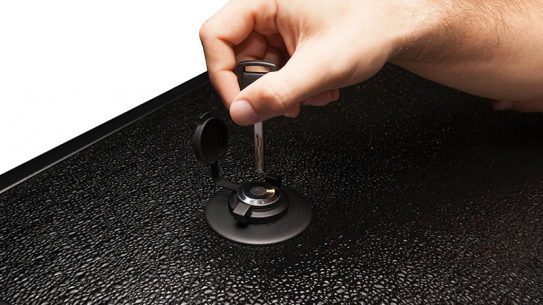 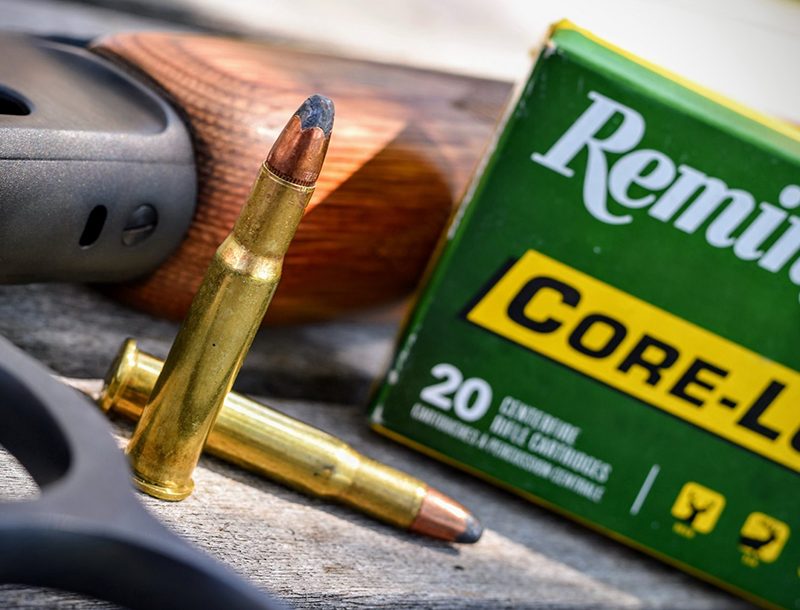