1 of 5
Photo by Thomas Kirchen
Grow Your Own Exotic Fruit
Jim Gilbert shows a visitor a Ukrainian almond in his mother block, where trees and shrubs are grown for evaluation. 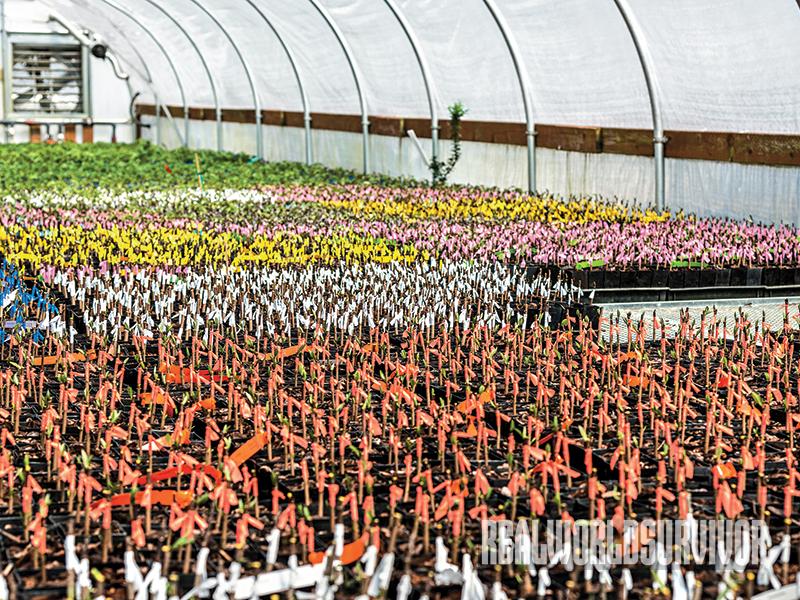 2 of 5
Photo by Thomas Kirchen
Grow Your Own Exotic Fruit
Tables filled with different kinds of fruiting plants in one of the hoophouses at Northwoods Nursery. The colors of grafting tape identify different varieties. 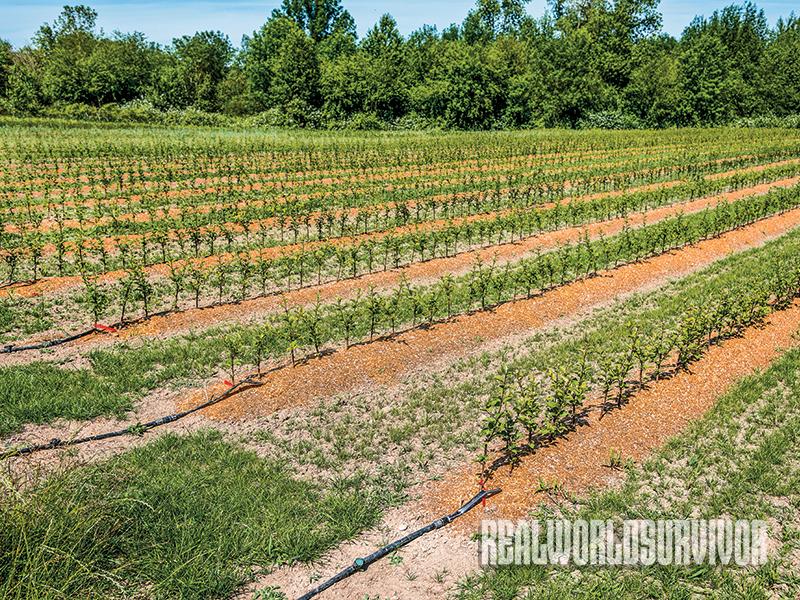 3 of 5
Photo by Thomas Kirchen
Grow Your Own Exotic Fruit
A block of rootstocks is drip-irrigated with a valve on each row, so each row can be watered separately. Sawdust is the mulch used on the rootstocks. 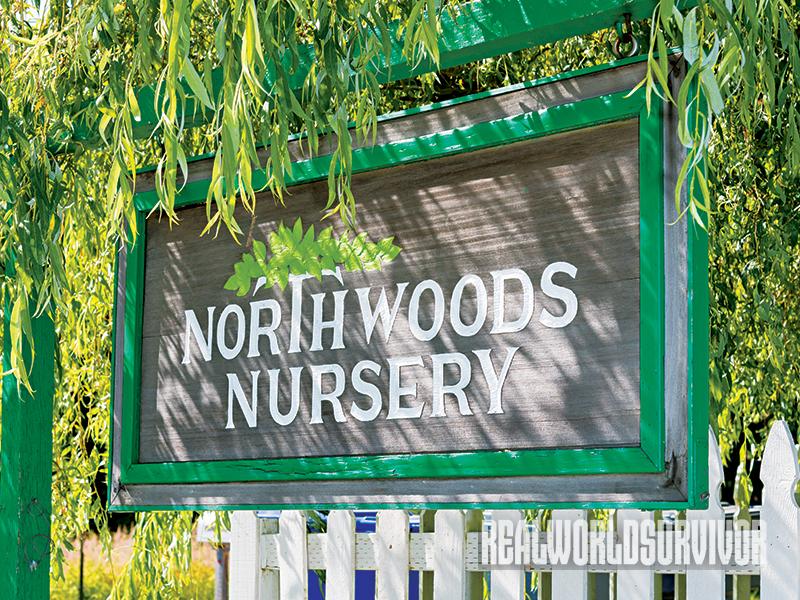 4 of 5
Photo by Thomas Kirchen
Grow Your Own Exotic Fruit
The entrance to Northwoods Nursery. 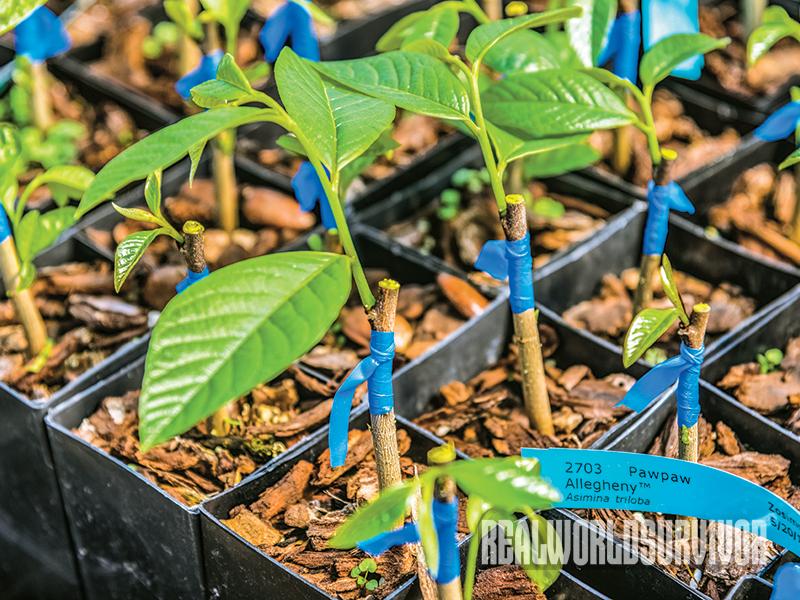 5 of 5
Photo by Thomas Kirchen
Grow Your Own Exotic Fruit
A tray of Allegheny pawpaws grafted onto rootstock. Jim Gilbert is helping to revive interest in this native American fruit with its sweet, yellow flesh. 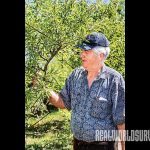 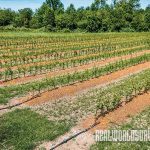 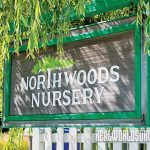 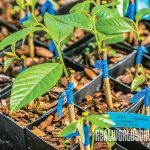 For a fruit lover, what could be better than picking tender, hardy kiwis off a vine and popping them in your mouth like sweet grapes? Or plucking vitamin C-rich clusters of bright orange sea buckthorn berries off arching branches for squeezing into a delicious fresh juice? These are just two of the many unusual and tasty fruits and vegetables that Oregon nurseryman Jim Gilbert has worked to introduce to American gardeners for more than 30 years.

But that’s not how the fifth-generation Oregonian thought he’d live his life. After being kicked out of Portland State University for serving free soup in the school cafeteria, and graduating years later with a degree in Russian language, Gilbert worked as a fisherman, a boat builder and a cabinetmaker, living simply in the town of Hood River, Oregon.

“I had always liked gardening and growing things, but I hadn’t thought about it as a way to make money,” he said. “The things that inspired me were the trees. They are perennial—they give something every year,” Gilbert said. “I thought that this would be something good for the world, too. The world needs trees.”

But Gilbert didn’t know a lot about the nuts and bolts of tree production, and began with a book on how to grow nursery stock. He sought out hands-on information as well.

“I got a job at a Forest Service nursery across the [Columbia] river where they were growing conifers,” he said. “I thought that I could do that.”

He was also interested in fruit trees but realized that the 2,000-foot elevation and other shortcomings of his Hood River home weren’t ideal for growing on a commercial scale.

“I had no phone, no electricity and poor soil, so I had a lot of things that would not work for a nursery,” he said. “The thing that convinced me was when we got 4 feet of snow, and with the small trees, the snow ripped the branches off the trees. I thought, how can I deal with this?”

So, in 1982, he headed west to the Willamette Valley to the community of Molalla. “Once I got here, the potential to grow fruit was expanded with the warmer location,” he said. And he liked what he did.

“I was feeling like it was a good fit for me, so I read a lot and talked a lot to a lot of people,” Gilbert said. Visiting a local agricultural university, he learned how to graft plants and began growing in earnest.

“The principles of soil improvement I was already familiar with,” he said. “Overall, looking back, I wish I’d had a chance to study horticulture.”

It was his personal study and perseverance, though, that made it work.

“I kept at it and read books by kerosene lamp at night. There was a lot of trial and error,” he said. “I was dedicated to do this and pretty determined to make it work. I put my soul into it.”

His new avocation turned occupation soon would take him around the world as he began sourcing new and unusual plants.

“It’s been a long project, but very rewarding. I started traveling in 1990 and discovered a whole new range of plants that people in North American didn’t know about,” he said. “It was an incredible thrill of discovery.”

It wasn’t so much that the plants were unknown, but rather unfamiliar.

“Some of the species had been grown here as ornamental plants,” Gilbert said, most notably the Cornelian cherry, a small tree with cherry-sized scarlet fruit. But on a trip to Ukraine, he found a woman who had been breeding Cornelian cherry for its flavorful edible fruit.

“That species has had a long history in Eastern Europe,” he added.

He took cuttings from those fruitful trees, returned to the U.S. and grafted the cuttings to understock trees. “I knew that they would grow here,” Gilbert noted.

The sea berry, though, was unfamiliar. Found from Europe to Western China, it is grown commercially for its nutritional and medicinal attributes.

“It had been grown as a shelter belt plant in Northern Canada,” he said. “We discovered the adaptability to regions of the U.S. and part of it was just trying it.”

Gilbert also taste-tested the plant’s attributes. “The sea berry is a big shrub but fruit really can’t be eaten off it because it’s so tart,” he said. “But it makes good juice. I drink the juice every morning and make juice every winter.”

But not every new fruit catches on with the general public.

“There are two ways [these plants] get to be favorites,” explained Gilbert. “People will try to grow them and then word gets out. Or someone writes a nice article about them.”

Goji probably fits the latter category best. While Gilbert has been selling this native Chinese shrub, also known as the wolfberry, for years, recently it took on a “super food” status in the media with claims that the berry and juice are medicinally beneficial—claims that haven’t been scientifically proven. Still, the berry is rich in vitamin C as well as other nutrients, and it has been added to commercial products ranging from bottled water to baked goods.

“Some have marketed it as ‘Lifeberry’ and it’s had a lot of hype,” he said. “But I think the popularity is starting to crest.”

Other more familiar plants tend to sell themselves. “Kiwis have been slower to start off but the hardy kiwi is like candy on the vine,” Gilbert said. Attributes that have won fans are the way it’s fuzz-less, smaller, sweeter berries hang like grapes from a trellis, and the plants are hardy down to –25 degrees Fahrenheit.”

According to Gilbert, “When people grow a plant, you market the promise of the fruit.” For example, the honeyberry is an easy-to-grow, attractive shrub with blueberry-like fruit. He markets it by putting it in a catalog, on the website and gets people talking about it. “For it to go fully mainstream, though, will take years,” he added. And it’s the mainstream plants that keep him in business.

“If you want to make a living at this, you have to make something that someone would conceivably like to buy,” he said. “I think that the first crop that we actually made money  on—enough that we were able to build a greenhouse—was the hardy kiwi. The fruit not only came with a familiar name but we also could give fruit to folks to sample.”

But not every variety that he offers will be as successful, he conceded. “I don’t know if chernika will ever become mainstream,” he noted. The chernika, for those unfamiliar with it, is a blueberry native to the Caucasus Mountains of southern Russia.

Gilbert’s personal favorites include both the unusual and the more common species. “In terms of the fruit that I like—I live for—are the figs here,” he said. “They are one of my favorites.” There are also black currants and the Asian pear. “There’s hardly anything better than eating a chilled Asian pear on a hot fall day.”

Gilbert grows nearly all of the plants at his 66-acre wholesale Northwoods Nursery and sells to the public through a Portland retail nursery and his One Green World website.

Along with introducing hardy, flavorful fruits and perennial plants, Gilbert has tried to ensure the sustainability of what he loves to do. He puts this into practice by employing sustainable farming methods that include growing cover crops and using drip irrigation and mulch around plants to preserve water. “But farming this way is more expensive and raises our costs compared to those of typical nursery practices,” he added.

Such practices don’t go unnoticed. In 2011, his nursery was honored as the small business winner of the Oregon Sustainability Award. The business also was the first Oregon nursery to earn a “Salmon-Safe” designation.

“When I first started,” he said, “I remember very clearly that I wanted to farm in a way that would leave the world and soil better than when I started.” For more information about One Green World, visit them online at onegreenworld.com.

Emergency prep isn't only for adults. Get your kids ready for when disaster strikes.