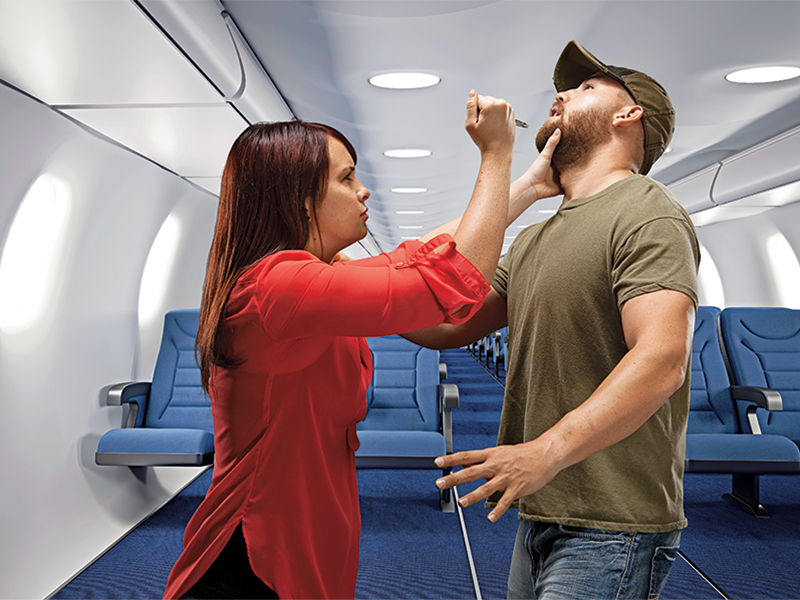 1 of 2
Photo by Straight 8 and Thinkstock
Survive an Airplane Crisis
The authorities won’t let you carry much when you fly, but that doesn’t mean you have to be helpless. 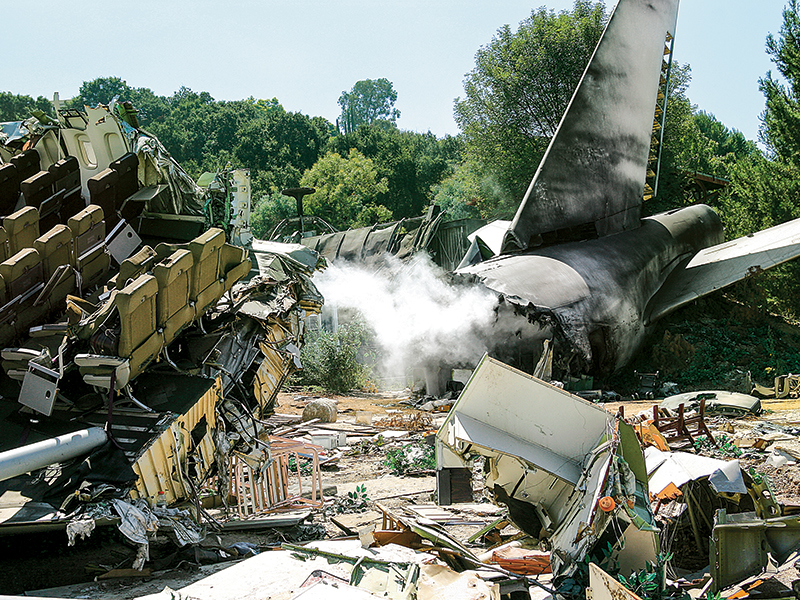 2 of 2
Photo by Shutterstock
Survive an Airplane Crisis
Where you sit on a plane can determine your chances of surviving in the event of a crash. While many passengers prefer to sit toward the front to deplane more quickly, studies have shown that the rear of the plane is the safest in a crash. Since 1971, for example, the survival rate at the back of the plane is 69 percent, while 56 percent sitting over the wings and 49 percent up front survive. 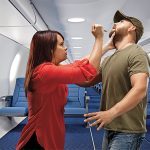 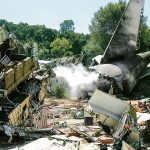 At any given time, about 500,000 people are flying somewhere in the world. The TSA screens around 2 million passengers a day, and there are estimated to be 30,000 to 40,000 commercial aircraft in active service. This means that a lot of folks go a lot of places in airplanes. While commercial air transportation remains one of the safest ways to travel, when things go wrong, they typically do so in spectacular fashion.

When people think of mishaps involving planes, they immediately think of crashes. Statistically speaking, the dangerous part is driving to the airport. Realistically, you could encounter the same dangers in the terminal and on the plane that you would just walking down the street—physical threats or attacks along with the potential for illness or infection. Being prepared for a plane to go down is just the beginning of air travel survival.

The authorities won’t let you carry much when you fly, but that doesn’t mean you have to be helpless. As with most things, a little forethought and planning before your next flight can make a big difference if and when life goes sideways.

First, you need proper footwear. Flip flops are great for getting through security but fairly worthless in a world characterized by jagged metal and flammable materials. I always fly in a nicely broken-in pair of combat boots. Speed laces mean I can get into and out of them as quickly as I might a pair of gym sneakers for the TSA screening area. Side zippers make them even faster to take off. Discipline yourself to keep them on while flying. They won’t do you much good stuffed underneath the seat ahead of you.

In a serious crash, if you survive the initial impact, you likely will exit the aircraft with what is on your person and nothing else. You can have the best gear in the world, but if it is in the belly of the plane or the overhead compartment, it might as well be on the moon. As such, some baggy pants with plenty of pockets and a comfortable shirt with sleeves are a good place to start.

A fire is always a serious matter on an airplane, but no one should be so paranoid as to fly commercial while covered in Nomex. However, long sleeves and pants can at the very least keep you warm if the cabin temperature is chilly. It can also provide some modest protection against a flash fire. A decent handkerchief rides painlessly in your pocket and is a remarkably versatile tool. It will make a tourniquet, a bandage or a sun screen in the hands of a resourceful survivor.

You should never be without a decent light. I like the Coast 20818 HP3R rechargeable penlight (coastportland.com). It is indeed roughly the size of a pen, shines nice and bright and is easily rechargeable. Once you are through security, make sure you keep it in your pocket, not in your carry-on bag.

Keep copies of your important travel documents as well as your car keys on your person. With most airlines charging for checked baggage, passengers are getting a bit crazy about carry-ons, so you may find your carry-on checked at the last minute. Your passport, money and car keys should never leave your person. I travel a fair amount and learned the car keys lesson the hard way. Getting back to your home airport is not necessarily a joyous experience if you are still an hour and a half from home and your car keys end up in a city where you are not.

Commercial airliners represent a unique space for defensive engagements. Chances are that no one who is a real threat will be in possession of a serious weapon. If someone leaps up on a commercial airliner brandishing a box cutter these days, however, his fellow passengers will likely rush to subdue him before he can engage in any serious mischief. As such, if you find yourself essentially unarmed on an airplane, chances are your opponent will be in a similar state.

A little basic martial arts training is a good idea for any able-bodied American. The experience instills self-confidence and promotes physical fitness. It also demonstrates that a surprising amount of the human anatomy can serve as a weapon in a pinch.

A small flashlight can cause quite a lot of pain in the right hands and can facilitate a takedown whether the opponent is a terrorist or just someone who has had too much to drink. A proper writing pen makes a splendid defensive tool if aggressively wielded, as do car keys. A laptop computer also makes a decent defensive shield against bladed weapons.

If you’re facing someone armed with a small knife, wrapping a shirt around your forearm can buy you some space. Small knives (generally, but not always) yield shallow wounds. The flight crew’s drink cart is heavy and will similarly allow you some decent space from a lightly armed opponent. Pin him against something and chances are your fellow passengers will join in long enough to help get things under control.

Commercial airliners sport nicely stocked first-aid kits, typically including automatic external defibrillators (AEDs) and everything you might reasonably need to keep somebody alive long enough to get on the ground. However, it never hurts to pack a little basic first-aid gear whenever you decide to travel.

An Israeli battle dressing is cheap, small and can be used in instances other than penetrating gunshot wounds. Keep your important medicines in your carry-on. On average, three to four passengers per thousand will have their luggage misplaced on U.S. airlines, and critical medications do you no good if they end up in another state. If it is really important, keep it in your pocket.

There is no better way to spread germs than to pack 175 people into a pressurized metal container and let them swap germs for three hours. It may look odd to wear a surgical mask, but you might be the one laughing if half the folks on the plane end up with the flu. Regardless, a little basic hand discipline will seriously cut down on communicable diseases. Wash your hands whenever possible and never touch your face. It may sound ridiculously simple, but it works.

There is literally no telling what sort of microscopic germs are lurking on exposed surfaces in that airplane. A few short months ago, it could have been Ebola and that is not funny at all. Airlines try to clean their airplanes between flights, but that is just for show. It just isn’t possible to sterilize something that big that often. Respiratory viruses as well as a delightful array of gastrointestinal bugs can thrive long enough on planes to set up shop in your delicate anatomy.

Contrary to popular perception, most commercial aircraft crashes are survivable. In one government study of the 568 crashes that occurred from 1993 to 2000 involving some 53,487 passengers and crew, 52,207 (more than 90 percent) of the people involved survived. Even in the 26 worst cases more than half the passengers walked away. The rearmost seats in a commercial aircraft are the safest. Survival rates in a study covering all crashes since 1971 showed a 69-percent survival rate in the back of the plane, 56 percent over the wing and 49 percent in the front. The chances of dying in a single commercial airline flight are 1 in 4.7 million. However, if your plane goes down and you survive the crash, the real ordeal is just beginning. Most of the standard safety information presented during the pre-flight briefing is lawyer-driven and superfluous. However, knowing your exits and being able to find safety and survival gear can be a very big asset.

Take a moment as you board and visualize the plane’s cabin. Now imagine the same space dark, smoking and upside down. Pack it with luggage from opened overhead compartments and hysterically screaming people. Through all of this you will need to get yourself, your loved ones and as many of those hysterical folks as possible off the plane before something really bad happens. That should put the crew’s safety briefing in a different light to you going forward.

Visualize the exits. Take a second to glance at the doors as you come in so you can work the levers and get them open in a pinch. Lots of strange stuff happens in plane crashes. My unit once lost a helicopter along with half the crew and passengers due to a mechanical failure. The injuries were gruesome and the aftermath was truly awful. However, one fortunate soul was ejected through a split in the fuselage, passed through the rotors and landed on all fours hard enough to smack his head and crack his flight helmet, but he was otherwise unhurt.

In a crash, the odds are in your favor that you will survive the initial impact. As with most things, think through various scenarios and prepare accordingly. Prepare for the worst, expect the best and enjoy your trip. 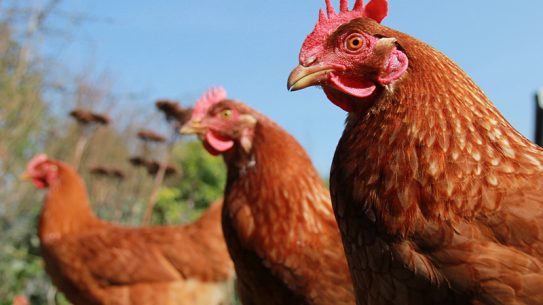 Here are some tips to help you foster healthy and delicious poultry.