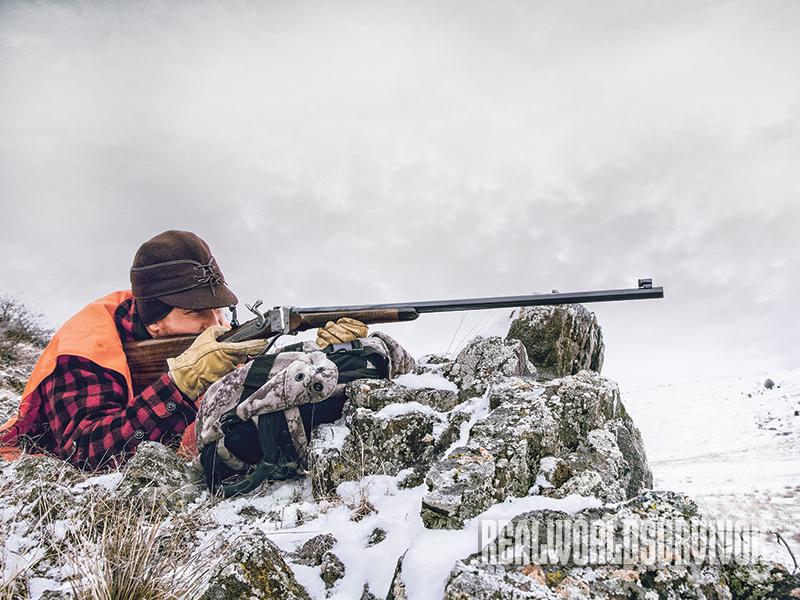 1 of 3
Lyman’s Model 1878 Sharps Replica
Lyman’s 1878 Sharps is a great hunting rifle for those who appreciate traditional firearms. It is capable of outstanding accuracy, and the big .45-70 can put down any game animal in North America. 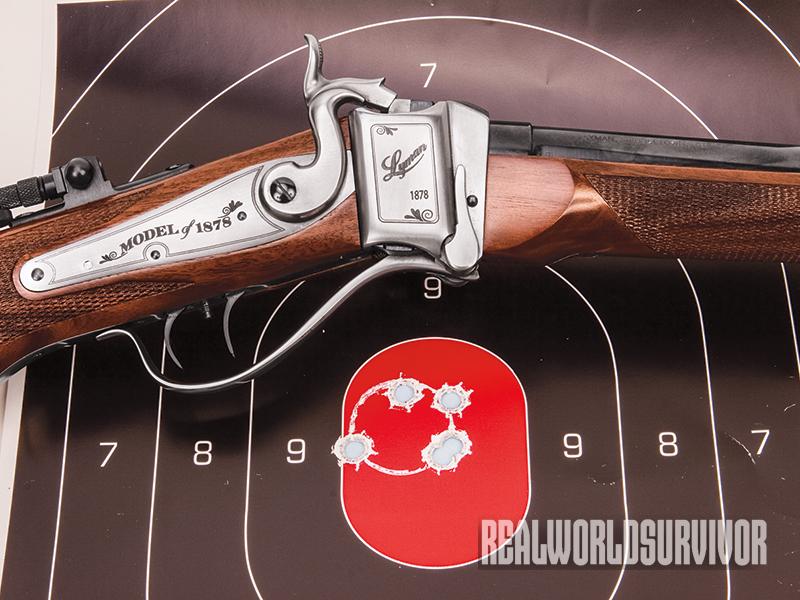 2 of 3
Lyman’s Model 1878 Sharps Replica
This rifle can shoot! This is a typical five-shot group, shot from the 100-yard bench. 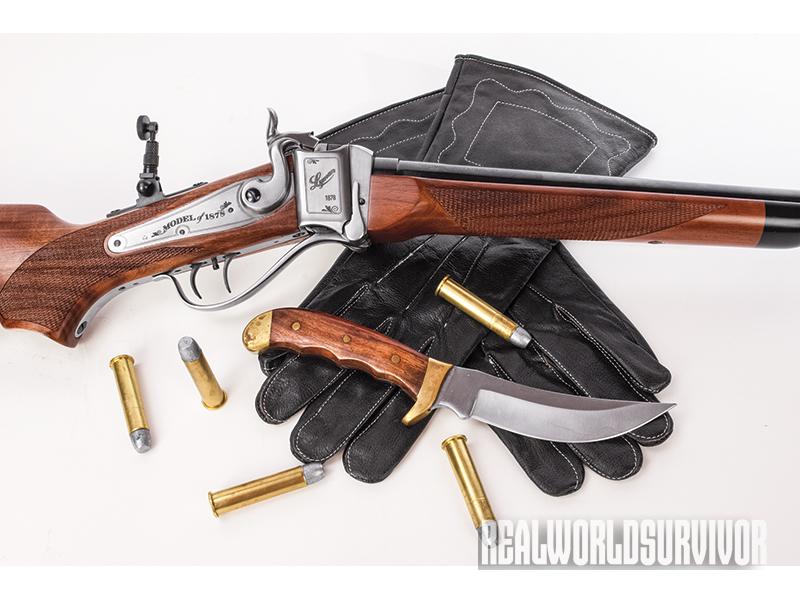 3 of 3
Lyman’s Model 1878 Sharps Replica
The original Sharps Model 1877 rifle was chambered for the big .45-100 Sharps cartridge. Lyman has wisely chosen the milder-recoiling .45-70 for its replica. 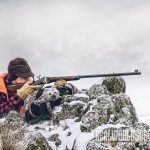 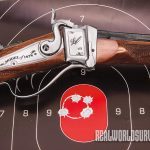 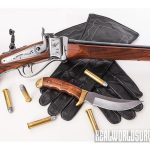 Lately, I’ve been shooting one of the very best Sharps rifle replicas that I have ever handled, from any manufacturer, anywhere—the Lyman Model of 1878. Let me say right up front that this gun is not a replica of a Sharps Model 1878 rifle. This is a typical Sharps side-hammer rifle, while the actual Sharps Model 1878 was a hammerless, falling-block design developed by Hugo Borchardt. If you are familiar with Ruger’s No. 1 single-shot rifle, you will have a pretty good idea of what the actual Model 1878 Sharps looked like.

The 1878 designation in this case appears to refer to the year when William Lyman invented his tang-mounted aperture sight, which was patented the following year. This sight, known as the Lyman No. 1 tang sight, was the first product produced by the Lyman Gun Sight Company, which is still in operation today as the Lyman Products Corporation. The actual rifle used in the new Lyman Model of 1878 is based on the Sharps Model 1877 design.

The Model 1877 is one of the most rare Sharps designs. Only about 100 rifles were made, and they were de-signed for one purpose: to compete in long-range target matches under what are generally referred to as “Creedmoor” rules. Creedmoor shooting gets its name from the National Rifle Association’s first national range in Creedmoor, New York. It was there, in 1874, that the American rifle team defeated the Irish rifle team, who were the United Kingdom’s champions, in a nail-biter of a match. After that victory, the popularity
of “Creedmoor” matches surged, and the Model 1877 was Sharps’ attempt to meet the needs of Creedmoor shooters.

The 1874 match at Creedmoor was shot using the rules of Wimbledon, the home range of the National Rifle Association of Great Britain. The NRA of the UK had been holding long-range shooting matches at Wimbledon since 1860. The rules were simple. You could shoot virtually any rifle from any position. But the rifle could weigh no more than 10 pounds. It could not have set, or “hair,” triggers, and it could not have telescopic sights. Targets were shot at 800-, 900- and 1,000-yard distances.

The Irish team that competed at Creedmoor shot muzzleloading Rigby target rifles. The American shooters were armed with a mixture of Remington rolling-block rifles and specially built Sharps rifles. The challenge for the Sharps rifles was the weight of the Model 1874’s robust receiver and lock. It limited the weight of the barrel that could be used in order to stay within the 10-pound weight limit. As a result, the barrel could be a little whippy, leading to inconsistent shot placement. It doesn’t take much whip to make a big difference at 1,000 yards.

The Sharps Model 1877 addressed those issues. Compared to the “Old Reliable” Model 1874, the Model 1877 had a lighter receiver and breechblock. It also used a slender back-action lock that is much more graceful than the locks of previous Sharps rifles. Those changes allowed Sharps to use heavier, English-made barrels on the 1877 and still meet the weight limit. Most of the Model 1877s were equipped with aperture sights on the heel of the buttstock, and were shot in the supine position, lying on your back with the rifle barrel resting your leg.

The Model 1877 rifles sold for $125, which was a pretty big chunk of change back then. That sum would have paid the average worker for four months. Besides being expensive, the Model 1877 had a very limited market, which consisted entirely of well-heeled long-range target shooters. As a result, very few Model 1877s were produced.

Even though they were designed as highly specialized target rifles, I have heard of some Model 1877s being reworked by the factory for hunting. The barrels were shortened from 34 to 26 inches, and they were fitted with new barrel-mounted sporting sights.

The Model 1877 may be the prettiest Sharps rifle ever made, and as a reproduction, the Lyman Model 1878 does justice to the original. The Lyman rifle is built by Pedersoli, a top-quality Italian gun-maker. This is the most lovely Sharps replica I’ve shot, and that’s saying something.

The original Sharps Model 1877s were chambered for the massive .45-100 Sharps cartridge. That round threw a 485- or 550-grain slug powered by anywhere from 90 grains to 110 grains of black powder. I have never shot the .45-100 Sharps round, but I have shot .45-120 cartridges, and, even with black powder, the recoil is pretty brutal. Lyman wisely opted to chamber its Model of 1878 in the tamer and more easily acquired .45-70 Government cartridge.

The 30-inch barrel is round with a slight taper. The barrel is finished in a dark, modern, hot tank blue, and it is rifled with a relatively fast twist rate of one turn in 18 inches. So the Lyman should shoot well with the light 300-grain bullets that have become popular with hunters as well as the long 500-grain bullets favored by long-range target shooters.

The wood on Lyman’s Model 1878 is as attractive as the metal. The stocks are made of medium-toned walnut. The wood is fairly straight-grained, but it has strong, dark annual lines. The forearm is slender with a rounded profile. It is beautifully hand-checkered, and it is finished with a classic ebony forearm tip. The forearm is held to the barrel by two screws, and it must be removed before the receiver is field-stripped. Otherwise, there is a good chance you will scratch the stock.

The buttstock has a pistol-grip configuration, with checkered panels on each side of the pistol grip. There is no cap on the bottom of the pistol grip, but the wood in that area is attractively scalloped. The stock has a very straight comb that is positioned just a bit below the axis of the bore. The straight comb, working in concert with the shotgun-style buttplate, really tames recoil, making this rifle very pleasant to shoot, despite its heavy chambering.

On the Lyman Model of 1877, the front trigger pull is 10 pounds unset, and 1.5 pounds when it is set by the back trigger. That pull is plenty light enough for me, but it can be adjusted for an even lighter pull if that’s what you like. I find set triggers to be useful for target shooting, but I don’t care for them at all on a hunting gun. Give me a nice, crisp 2- to 3-pound pull on a single trigger and I am a happy rifleman.

Some of the key features of the Lyman 1878 are its sights. The rear sight is Lyman’s No. 2 tang sight. This is the direct descendent of the sight Willian Lyman invented in 1878. This sight style is popularly known as a “lollypop sight” for obvious reasons. Essentially, the sight consists of an aperture mounted on a threaded stick. A pair of threaded barrel nuts is used to extend or retract the stick to fine-tune elevation adjustments. The aperture at the top of the stick can be used bare. It forms a 0.19-inch-diameter ghost ring that is perfect for hunting. It is also threaded to take inserts that provide finer apertures for target shooting. Lyman provides two inserts with the sight that have apertures of 0.1 inches and 0.06 inches, respectively.

On the Model of 1878 rifle, the Lyman No. 2 tang sight is partnered up with Lyman’s 17A globe sight up front. This is a fully hooded front sight that accepts seven interchangeable inserts. There is one beaded post, two widths of straight-post front sights and three diameters of open aperture front sights. There are also yellow inserts to improve contrast in the sight picture on cloudy days. For close-range shooting, I liked the ghost-ring rear sight in conjunction with the beaded post front sight. If I were hunting with this gun, I’d choose this sight combination.

For target shooting at 100 yards and beyond, I used the 0.06-inch aperture insert teamed up with one of the open aperture front sights. These sights are a joy to use. When you are shooting at respectable distances, blade front sights just cover up too much of the target to shoot fine groups. With the aperture front sight you can see the center of your target in the center of the aperture. With this sight combination, I was able to shoot sub-2-inch groups from the 100-yard benchrest, and, for me, that’s as good as it gets without a scope.

The one drawback of this sight combination is windage adjustment. The Lyman No. 2 tang sight is adjustable for elevation, but not for windage.

Out of the box, the Lyman 1878 rifle shot a few inches to the right, but after a few applications of punch and hammer adjustments, I had my groups dialed in. I tested the Lyman Sharps with three varieties of factory ammo. I shot 300- and 405-grain loadings from Remington and a 300-grain loading from Federal.

I started with 405-grain Remington Express soft-point ammo. This is the round that I use as a baseline for all my .45-70 evaluations. It took me 15 rounds to get the sights zeroed. Then I settled down to see how it would perform. From the 100-yard bench, the old Remington load turned in an excellent performance. My best five-shot group measured an 1.75 inches in diameter. Out of the five 5-shot groups I shot, the biggest was less than 2.5 inches across. The average velocity with this load was 1,222 fps.

The next load I tried was the 300-grain Remington Express soft-point JHP ammo. The average velocity with this ammunition jumped up to 1,672 fps, and its accuracy was great. My best group was only 1.5 inches across at 100 yards. When I switched to Federal’s 300-grain, soft-point .45-70 load, velocity took another jump to 1,907 fps, which is really cracking for that old round.

The Lyman Model of 1878 is beautiful, well balanced and able to throw a heavy slug dead-center as far away as you can see the target. It doesn’t get better than this. For more, visit lymanproducts.com or call 800-225-9626. 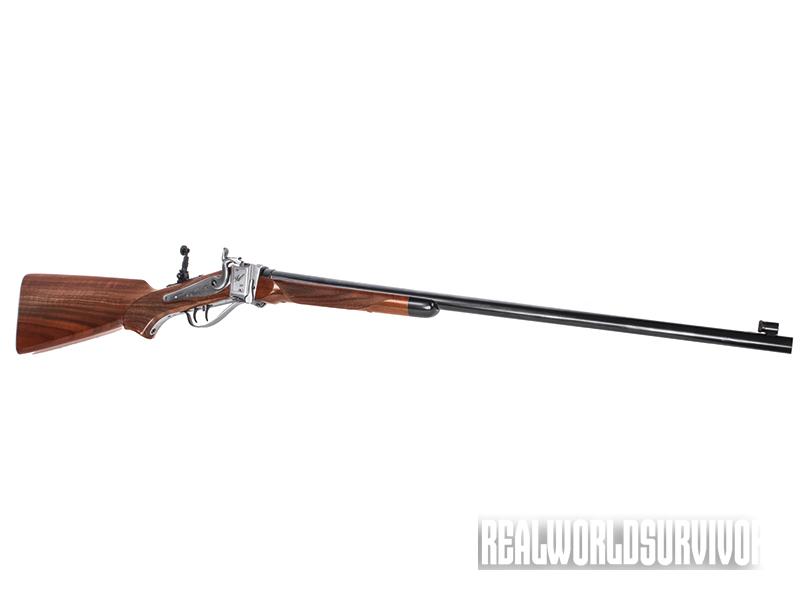 Bullet weight measured in grains, velocity in fps by chronograph, and accuracy in inches for best five-shot groups at 100 yards. 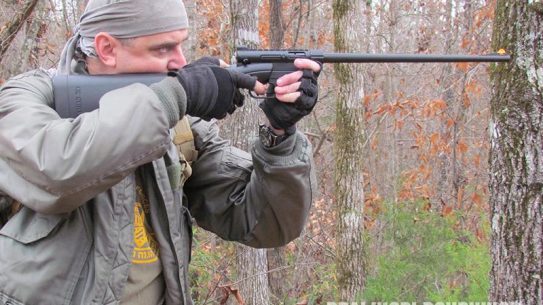