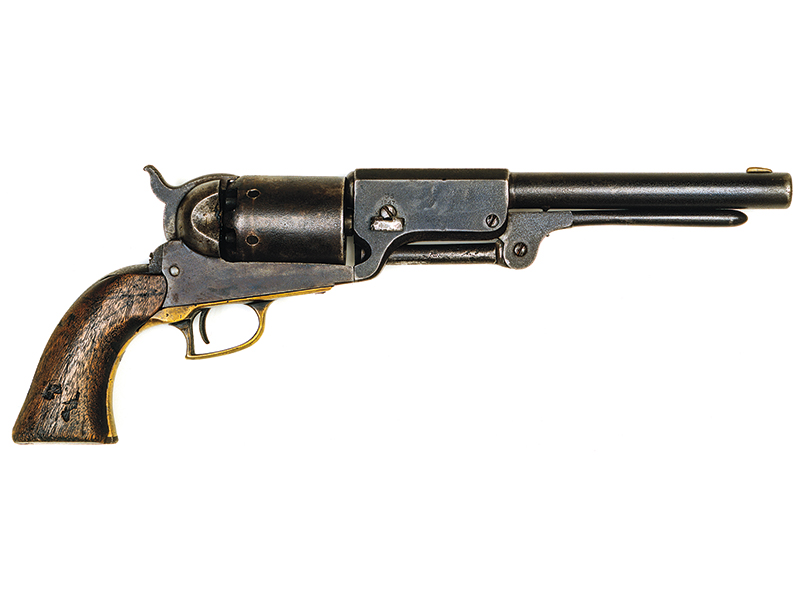 1 of 4
Photo by Buffalo Bill Center of the West,
4 of John Johnston’s Frontier Firearms
Colt Model 1847 “Walker” single-action revolver. This six-round, .44-caliber revolver is similar to one John Johnston was rumored to own. 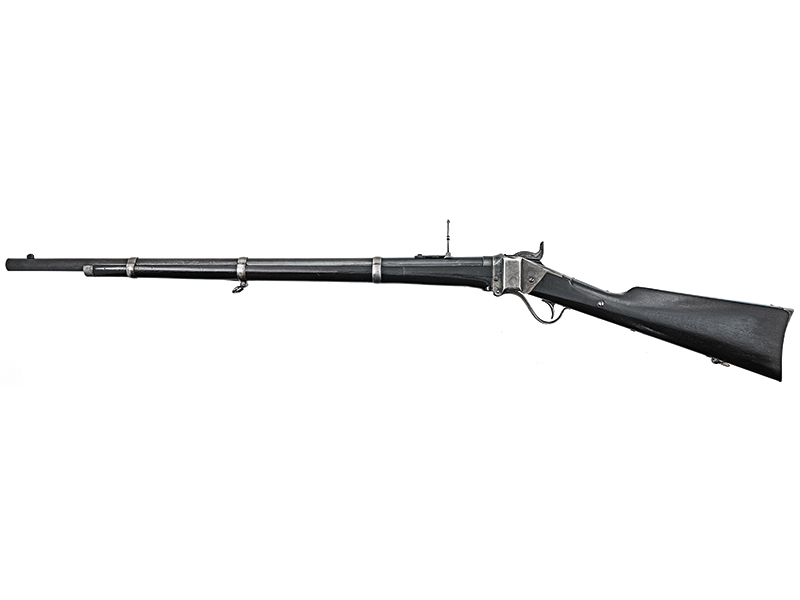 2 of 4
Photo by Buffalo Bill Center of the West
4 of John Johnston’s Frontier Firearms
Sharps Model 1874 Buffalo Rifle, .45-70 centerfire caliber, Serial Number 161937, Octagonal Barrel. This is a similar type of rifle that John Johnston is photographed in possession of in 1876. 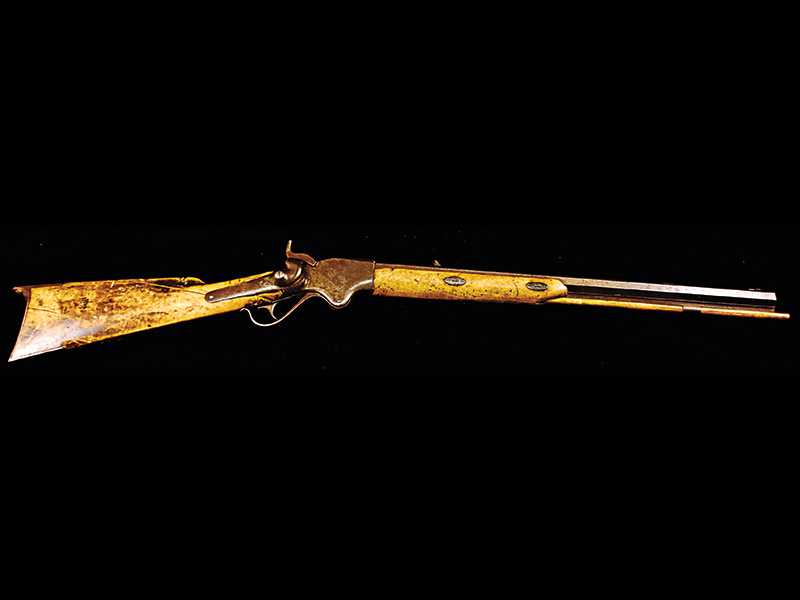 3 of 4
Photo by Wyoming State Museum
4 of John Johnston’s Frontier Firearms
The .50-caliber Hawken Spencer rifle that belonged to John Johnston. He killed a Native American to acquire this rifle because he thought it would be a superior gun thanks to the Hawken affiliation. 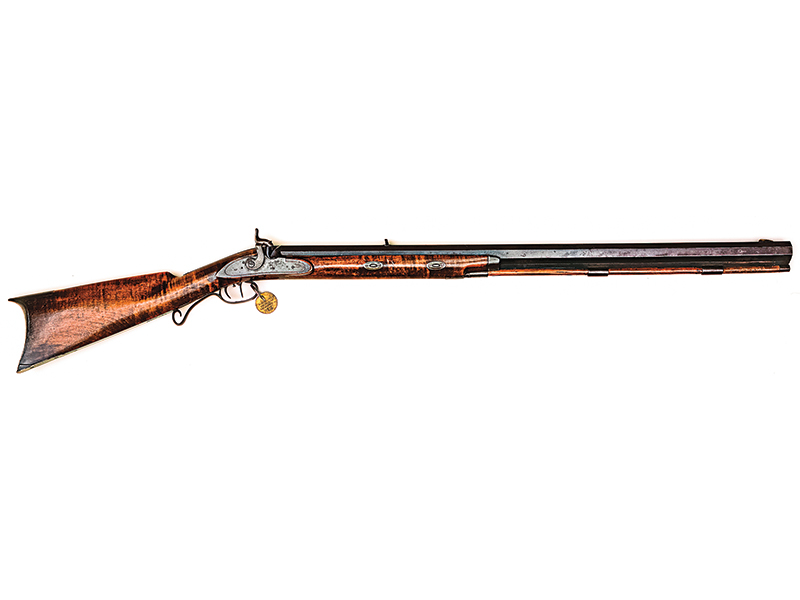 4 of 4
Photo by Buffalo Bill Center of the West
4 of John Johnston’s Frontier Firearms
A half-stock Hawken Rifle in .56 caliber with an octagonal barrel that belonged to John Johnston in the 1860s. 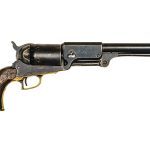 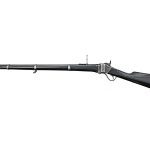 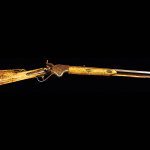 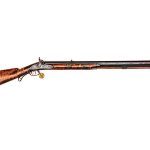 While Johnston was handy with a knife, he was no slouch with a firearm. Some of his guns have survived to present day, while others appear in oral histories and are depicted in photographs. Oral histories reference a Colt Walker revolver and a Bowie knife with rosewood grips and handles.

Colt Revolvers: The Colt Walker, also known as the United States Model 1847, was the first revolver purchased by the U.S. Army Ordnance. It was a .44-caliber, single-action six-shooter named after Captain Samuel Hamilton Walker. Walker and Samuel Colt created the pistol together for the Texas Rangers. Sadly, Walker died less than a year later with a revolver in his hand, while Colt went on to fame and fortune.

According to the legend, Johnston’s Walker revolver and knife were confiscated when he was captured by the Blackfeet in 1861. Before he escaped, however, he reacquired his effects but ultimately gave them to Chief White Badger. He allegedly replaced it with a .44-caliber Colt Model 1860 Army Revolver.

Sharps Shooter: The current location of Johnston’s Sharps rifle is unknown, but it can be seen in a photograph of Johnston from 1876. Not much is known about Johnston’s association with the firearm except this surviving photograph that assigns it to his possession around the time of the Plains Indian Wars.

Christian Sharps developed this rifle that bears his name in 1848. Sharps rifles were initially chambered in .52 caliber, but later variants were popularized in .45-70 centerfire cartridges. It is a single-shot rifle with a falling-block mechanism, characterized by a lever vertically sliding the breechblock open to facilitate loading. The Sharps rifle was a favorite of buffalo hunters.

Spencer Rifles: Johnston did not like Spencers. A Spencer repeating rifle is a lever-action percussion firearm with a manually operated hammer. Designed in 1860 by Christopher Spencer, the firearm has a seven-round tubular magazine in the buttstock and fires .56-56 Spencer rimfire cartridges.

In 1864, Johnston enlisted in the American Civil War. He was initially assigned to Company H of the 2nd Regiment Colorado Cavalry. Spencers were popular with Union cavalry, but the first time Johnston fired one the magazine exploded, so he threw it away and picked up a single-shot rifled musket that he used until his honorable discharge in 1865.

After the War, Johnston had an opportunity to acquire a Hawken Spencer rifle. Hawken Spencers were developed by John Philip Gemmer, the successor to the Hawken company. He saw the need for a breech-loading rifle in the post-Civil War era and decided to merge the large bore of the Hawken rifle with the Spencer’s repeating action.

According to Johnston, the gun came into his possession because of a Native American boy. Allegedly, the boy acquired the gun from a man attacking his sister. Johnston, in turn, killed him for it. This firearm has survived to the present and is on display at the Wyoming State Museum. It is a .50-caliber, lever-action rifle bearing serial number 30889, with an octagonal barrel marked “S. Hawken St. Louis” near the rear sight. The breech is marked “Spencer Repeating/Rifle 30 Boston/PATD.”

Why would Johnston kill someone for a Spencer he didn’t even like? Justified or not, he thought the Hawken affiliation would make it a superior weapon. According to Johnston, it was not. He later traded it to Louis Romey of Virginia City, Montana, for food.

Hawken Hardware: Hawken rifles were a favorite of mountain men, including Johnston. These rifles, made by Jacob and Samuel Hawken of St. Louis, Missouri, were known for large bores, heavy stocks and double-set triggers. Despite their heaviness, these rifles were weighted so that, when sighted, they were perfectly balanced. They were hard to obtain on the gun market because the Hawken brothers did not mass-produce the design.

In 1843, before traveling west, Johnston stopped in St. Louis to visit the Hawken brothers’ store. He was disappointed that the two Hawkens available at the time were in a lighter caliber, but he bought them both anyway.

One of the only scenes in the film Jeremiah Johnson that was partially accurate was how he acquired a heavier-caliber Hawken. One winter, he found a half-stock Hawken rifle on a mountain man who had frozen to death. It was a .56-caliber (seven-groove rifling) firearm with an octagonal barrel. He gave the deceased man a proper burial and used the gun extensively. This gun, alongside Johnston’s Wade & Butcher Bowie knife, is on display in the Cody Firearms Museum at the Buffalo Bill Center of the West. 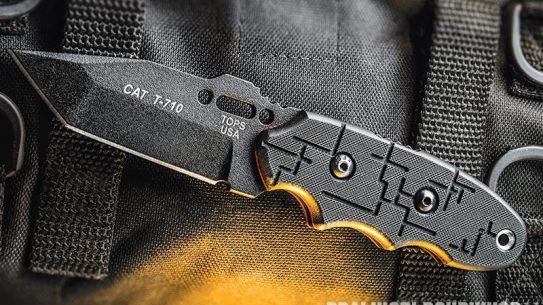 A fixed-bladed workhorse you can count on during backwoods adventures.