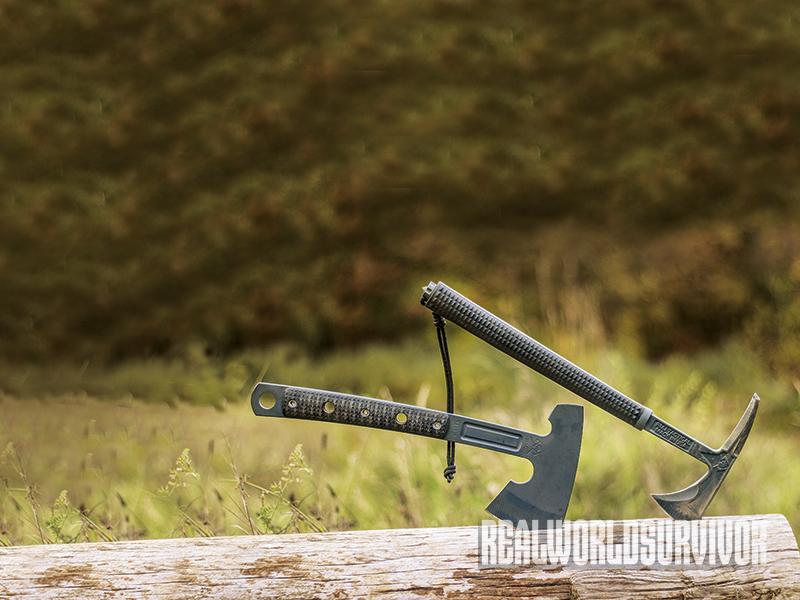 1 of 4
Backwoods Work Tomahawks
The RMJ Woods Hawk and RMJ Shrike for a size comparison. Each tool has a different feel and personality. 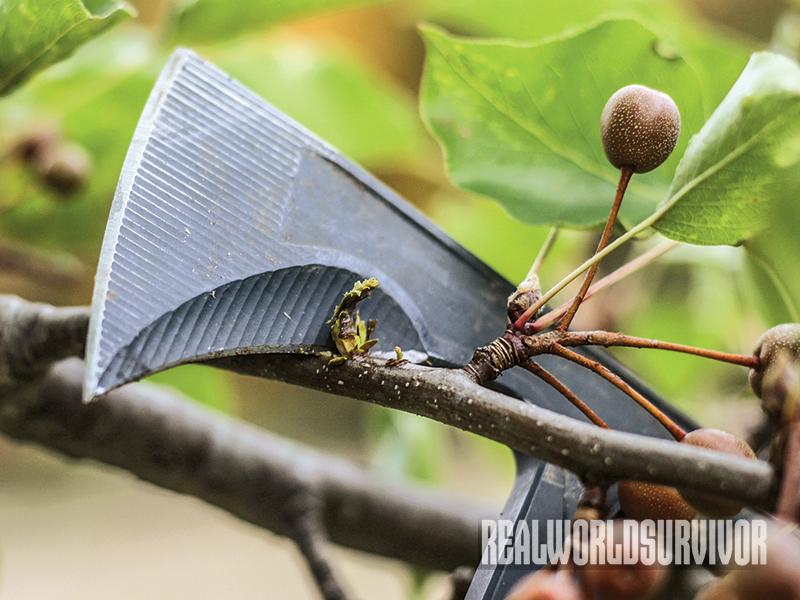 2 of 4
Backwoods Work Tomahawks
If your arms are too short, use your tomahawk as a way to hook good eats. 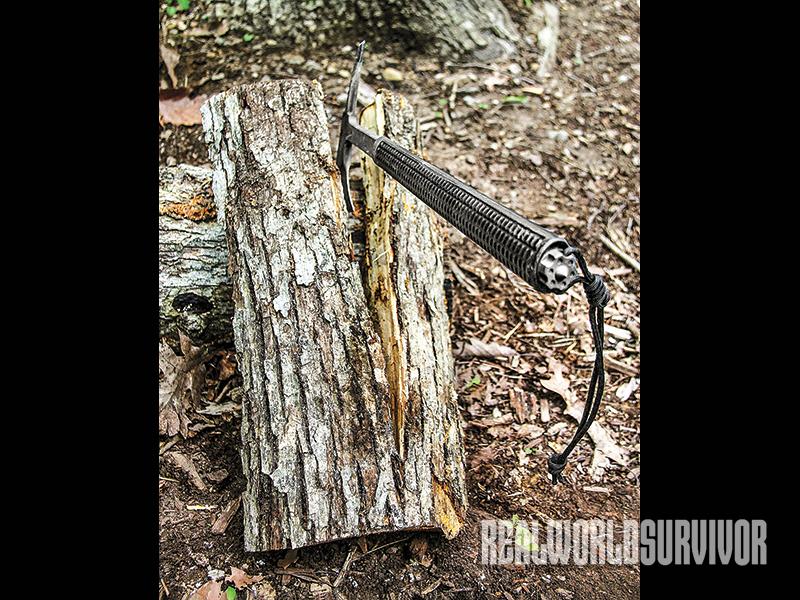 3 of 4
Backwoods Work Tomahawks
Tomahawks are normally not splitting tools because of the large eye. Both RMJ tomahawks worked well given their weights and slim profiles. Here the RMJ Shrike is pictured splitting seasoned logs in camp. 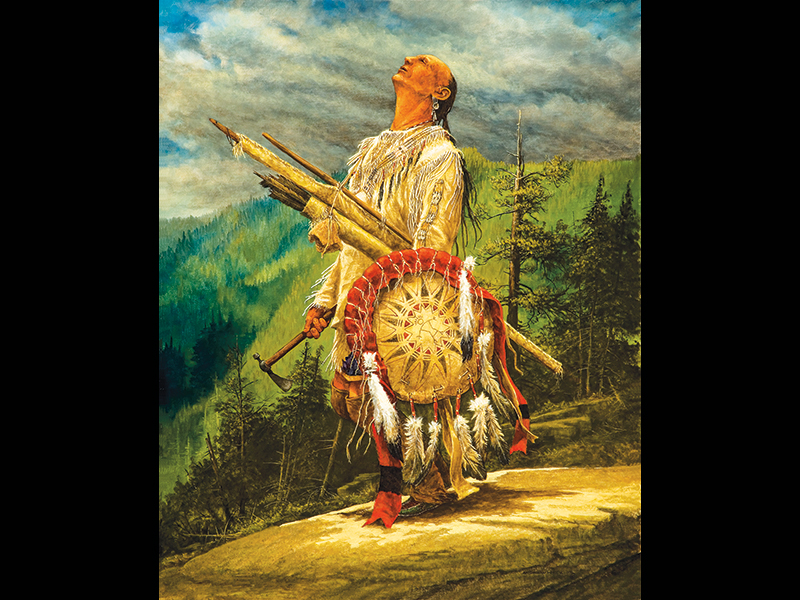 4 of 4
Photo by Andrew Knez Jr.
Backwoods Work Tomahawks
The warrior in the painting “Seeking Guidance” is about to embark on a dangerous journey. He has isolated himself on a lonely hilltop and is looking for favorable signs from his guardians.<br> <b>Editor’s note:</b> For information on purchasing prints and paintings like “Seeking Guidance” by Andrew Knez Jr., please visit <a href="http://andrewknezjr.com" target="_blank">andrewknezjr.com</a>. 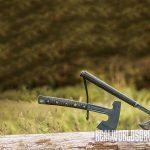 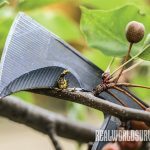 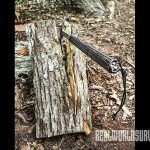 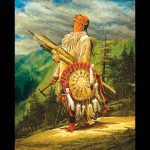 Breaking through concrete walls. Puncturing 55-gallon drums. Tearing a car roof apart. These are the images we associate with the word “tomahawk.” Tactical applications, along with clever marketing, have elevated the tomahawk to new heights. Modern machinery and technology have been used to create tools at home in harsh battlefield conditions. Recently, tomahawks have also been showcased as weapons in television and movies.

Given the demands of the modern soldier, these tools are welcome additions to their kit. Collectors and survivalists, meanwhile, covet the aggressive designs and the attributes tomahawks have over more traditional axes and hatchets. What happens, though, when you take a tool designed for battle and apply it to historical usage? What happens when the tool is used for constructive fieldcraft? I decided to research the historical use of the tomahawk and apply what I learned to various tasks using two 21st century tomahawks from RMJ Tactical.

When examining the tomahawk, the American tomahawk, you need to look at one marker event in particular. This event was the moment indigenous populations came in contact with European settlers. Prior to contact, the tools carried by those cultures without the modern convenience of steel were limited to stone and wooden tool construction. The first axe-like tool was the ball club carved from wood. Later stone tools were called hand axes, as they were merely held in the hand, and as technology progressed these stone heads were later hafted into handles.

Early tomahawks, pressure-flaked from stone, had sharp but brittle edges. Other varieties used blunter heads for the purpose of pounding and crushing. Some tools, like the digging adze, resembled tomahawks and were constructed of wood and used for digging. Prior to contact with the settlers, native tomahawks were also used in numerous ceremonies and rituals. All of this changed, however.

Europeans came to the United States and brought the technology of steel. Blades were often exchanged throughout the Americas for gold and silver, as natives found the steel far more desirable than their stone tools. Native Americans applied their newly acquired technology to their lifestyles. With continued contact, the inevitability of conflict was guaranteed and eventually tomahawks were used in combat. Warfare eventually gave way to peace, however, and tomahawks were again called into service as gifts of peace and symbols of respect between previously warring parties. Also in times of peace, when colonists and Native Americans worked together harvesting tobacco, the tomahawk was used for smoking and sharing the harvest and occasion.

Any chopping tool can fell a tree with enough time and effort. Using my tomahawks, I was able to drop a few smaller trees with deliberate action. Working with a strict 45-degree, downward angle, I found the ’hawks capable of felling. In general, any downward felling cuts with a more acute angle have a tendency to glance. Also, with a smaller head, it is possible to overshoot the upright trunk and damage the handle of a tomahawk.

The RMJ Shrike and Woods Hawk have beards that extend below the bottom of the head, and the all-steel handle cannot be damaged with accidental contact with wood being cut. Furthermore, tomahawks were used to hollow out downed trees to make dugout canoes in various geographic regions of the United States. In Pennsylvania for instance, the tribes didn’t have access to large birch trees for bark canoes. Therefore, canoes were hollowed out with tomahawks and other stone tools. Using the ’hawks provided, I worked with downed trees to make hollows, and I found the spike and edge useful for removing material. While I did not create a canoe,  I saw how it would be possible with  enough time, effort and the right tools.

Limbing branches is another practical application of the tomahawk. Low-hanging branches of evergreens were at one time referred to as “squaw wood.” These dead branches were easily snapped off by women and used for firewood. Green branches from a recently downed tree are not as easily removed without the aid of a cutting tool. The tomahawk was used to create posts and smooth beams. Using my two tomahawks, I limbed branches while kneeling. Working from the bottom of the trunk to the top of the tree, I knelt down and swung the Shrike and Woods Hawk from the inside to the outside of my body. To conserve energy, a woodsman is able to gather a lot of wood for his firewood pile by limbing the branches of dead and downed trees. Not only is less energy used with a swift limbing swing than a felling swing, but there is less waste with fewer wood chips being deposited on the ground.

Tomahawks can also split wood but are limited to their design. Folded-over heads create large eyes that impede splitting. Also, depending on the length of the head from the edge to the front of the eye, this type of tomahawk will only process wood of the same diameter or smaller. Tomahawks with more of a wedge geometry will perform better but require more force to power through a round of wood. Traditional tomahawks are hafted on a wooden handle, which provides marginal weight behind the head. The two RMJ tomahawks I used have integral construction of handle and head, which creates more optimized weight. Despite having smaller heads, the extra weight compensates for the shortage and allows for the splitting of wood much larger than traditional ’hawks could handle.

The safest way to split wood with a tomahawk like the ones provided or a hatchet is to use the head like a wedge. Working with a round of wood or from the outside working with the grain through the width, the ’hawk is batoned through the wood. This is particularly useful inside confined areas.

Second to primitive fire, cordage-making skills are the hardest to master in the outdoors. While I prefer to be prepared, the need may arise to make cordage from the land. Roots make excellent cordage when they are green and harvested from the earth. Using the RMJ Tactical Shrike’s rear spike, digging for evergreen roots is an easy task. Even the Woods Hawk’s axe poll was thin enough to act as a digging aide.

Digging roots is one purpose I have for these tools, but the ability to dig is needed for farming and foraging pursuits as well. The rear spike can be used to create shallow trenches and holes for planting crops. If needed, the rear spike can also be used for digging or cutting through ice in winter conditions. Creating ice-fishing holes may mean the difference between
feast or famine.

Maple and birch trees are great sources for nutritious sap. The easiest way to collect this liquid is to tap the trunk of the tree through the outer bark and into the inner. Using the RMJ Tactical Shrike, I was able to create clean holes in the bark of trees with minimal damage. This ensures not only the easy collection through a single hole, but also the increased survivability of the tree. Also possible is the tapping of other water sources from a round globe. Green coconuts contain water underneath their husks and certain varieties of bamboo contain water between their segmented stalks. Depending on what vegetation is tapped, the fluids contained within are both hydrating and contain nutrients.

The shape of a tomahawk lends itself to hooking. From fruiting branches to underwater stalks, both tomahawks were used for hooking objects outside the outstretched reach of my arm. The sharpened beard of the RMJ Shrike helps shear stems as it hooks. In clearing vegetation and overgrowth, the sharpened beard acts like a brush hook and cleanly removes invasive species like bittersweet. While this climbing vine is a nuisance for plant growth, it is another excellent source of cordage. After extended use of the ’hawk in the field, hooking becomes a natural act, and rather than putting the ’hawk down, firewood is hooked when moved about the fire ring and piles of debris are shifted with both the spike and beard. The tomahawk becomes an extension of your hand.

Stone tomahawks and axes became hammers when their edges dulled. The need to hammer and pound is a real necessity for the outdoorsman. On one survival course I taught, the need to hammer and pound was frequent. Using the flat of the tomahawk, I was able to make tough cuts of meat more easily digestible by tenderizing them before grilling them on the campfire. The same can be done to meat prior to smoking it. Tent and tarp stakes were pounded in place safer than if I was using a rock. Cordage fibers, milkweed to be specific, were made more pliable with light pounding against a smooth log. Cattail (one of the most important edible and medicinal plants) roots were processed separating the pure starch they contain from the less-edible fibers through pulverizing them. Traditionally, using a hatchet with a wooden handle was not advised, as it could loosen the head. This is not a concern with the Woods Hawk, Shrike or any other one-piece ’hawk.

The tomahawk has been given a reputation for being inadequate for the modern outdoorsman’s needs. Critics might claim the edge is too thin or the head is too light for serious use. These allegations are partly due to the availability of highly effective purpose-specific tools. The tomahawk was and is a multi-purpose tool, and while it does not dig as well as a shovel or drop a tree as well as a full-sized axe, it does accomplish these tasks with more deliberate, skilled use.

Early Native Americans traveled fast and had a lightweight kit. They were skilled in utilizing what they had, and they didn’t require all the equipment we have at our disposal today. We can learn from their example and lighten our load by carrying modern ’hawks capable of much more than they are recognized for. Ultimately, we can either carry more or accomplish more by learning to use what we have in different ways. For more information, visit rmjtactical.com or call 866-779-6922. 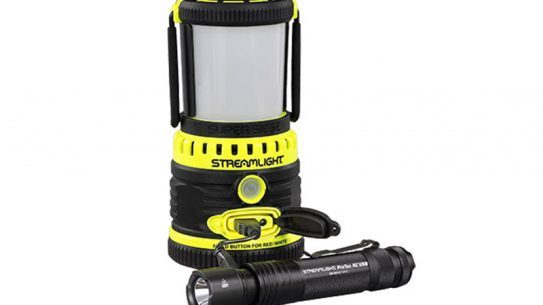