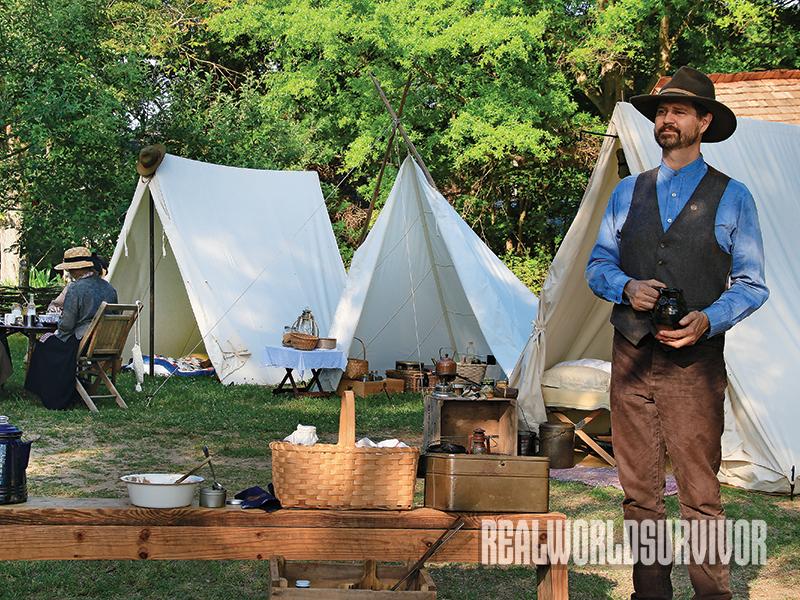 1 of 5
Do-It-All Woodsman’s Shelters
Bookends of Wedge Tents shown with the Tarp Tent in the center. Note the seams in the tent created by sewing long strips of canvas together. Acorn Patrol member Steve Maxwell enjoys a morning cup of tea while the Campfire Girls settle into a hearty breakfast at the 2015 Kephart Days re-encampment, Gastonia, NC. 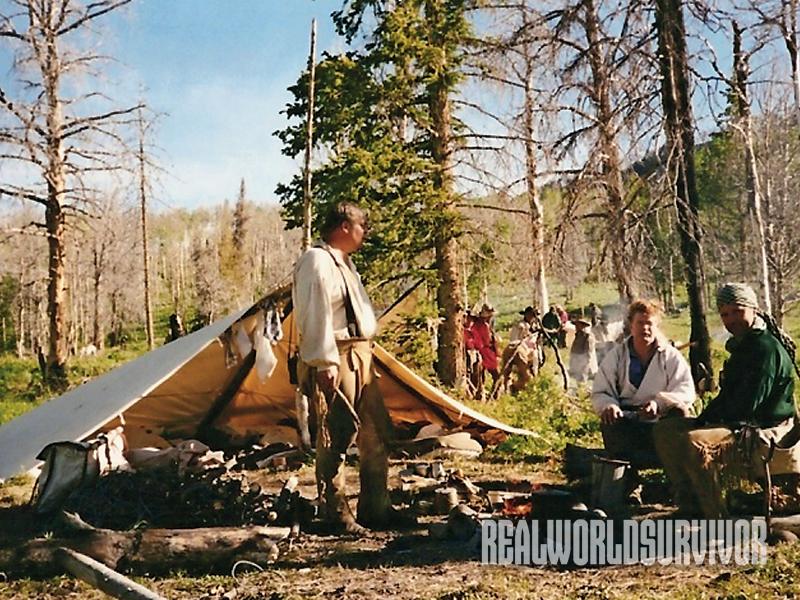 2 of 5
Do-It-All Woodsman’s Shelters
<b>FIG. 1</b>: David Wescott and Dale Root (seated on the right side of the tent), and author Jon Olson standing out in front at the AMM Rendezvous Dry Cottonwood Creek, 1999. 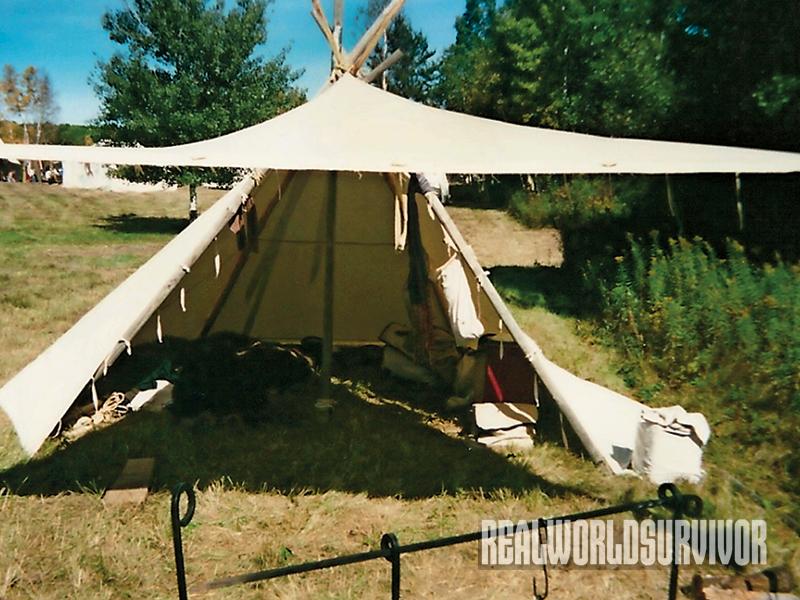 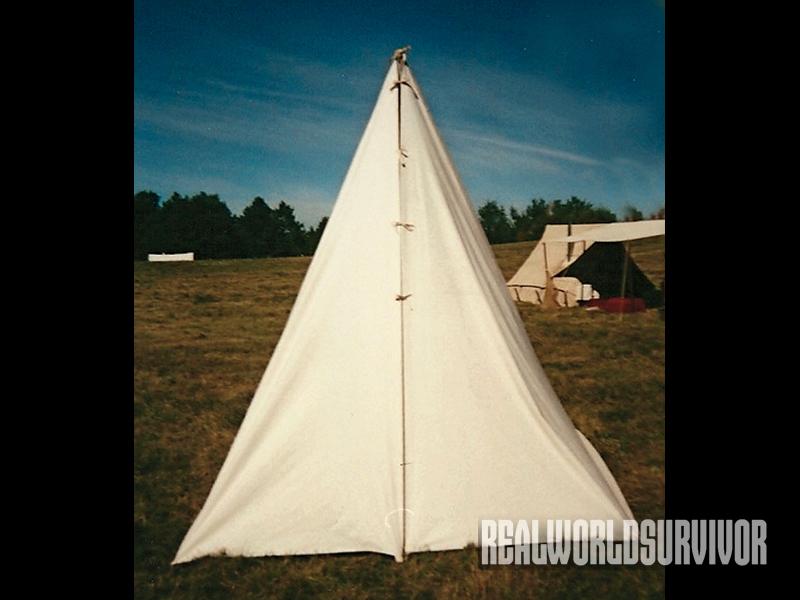 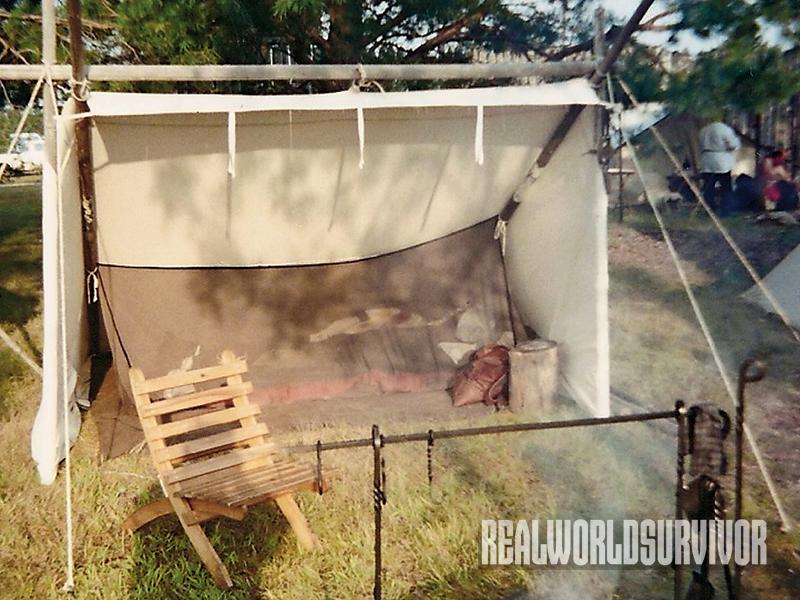 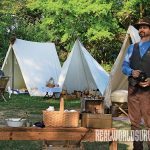 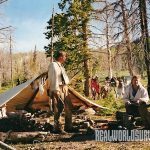 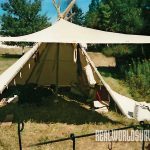 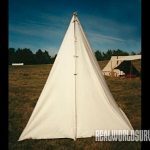 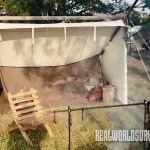 As I read with interest the article “Steve Watts: Primitive Perfectionist” in a recent issue of American Frontiersman, I realized that I had met his colleague, David Wescott. It happened at the 1999 American Mountain Men (AMM) Western National on Dry Cottonwood Creek of the Gros Ventre River drainage, in Jackson Hole, Wyoming. AMM members Dale Root, Jeff Palm and I were set up about 40 feet above Dry Cottonwood Creek. My journal for June 26, 1999, reads: “While I made additional trips [to the wagon], Dale and Jeff started to set up camp. We each had a piece of canvas (9×9) for shelter. Taking two of them, a small lean-to was formed (Fig. 1). The third canvas would be used through the week for covering gear and supplies.”

My journal for Friday July 2, 1999, reads, “David Wescott of Primitive Tech stopped by.” As I recall, he said he was taking photographs for a book he was writing, and he asked if he could take pictures of our camp. As it turns out, Jeff and I are pictured in his book, Camping in the Old Style, in front of our shelter with Dale being just visible behind Jeff. I believe the photo below is of David (in the green shirt) Jon Standing with Dale seated by David. Please note for a latter discussion that two 9-by-9-foot tarps are approximately equal to a 9-by-18-foot tarp.

After reading the “Steve Watts: Primitive Perfectionist” article, I also found an article by Steve Watts and David Wescott that detailed the camp of a master woodsman. In it, a drawing of a “Tarp Tent” piqued my interest, and it dawned on me that I had been using a similar shelter for at least 20 years. I believe that this setup is one of the finest shelters available for one or two men and their gear.

The shelter can be set up as a one-pole  (Fig. 2) design with the roof sloping inward in all directions, thereby reflecting heat and light from a fire into the lodge. This setup is accomplished by staking points “F,” “L” and “G” with a pole roughly 2 feet shorter than the “X” dimension at “A,” and staking points “C,” “D,” “I,” and “J” out. Then fold under the sod cloth and points “E” and “H.” Additional poles can be placed inside along the dotted lines in the sketch, forming a very substantial, long-term shelter. The shelter will stand securely without any additional guy ropes. The one-pole setup (Fig. 2) also sports a triangular fly that was made to function as a door as well. Extra interior poles make for a very sturdy shelter.

If you want to set the shelter as a Miner’s Tent (Fig. 3), stake points “D,” “F,” “G” and “I” out in a square, then tie the pole to point “A,” raising and adjusting the stakes as needed. The door should tie shut when adjusted properly and be staked in the middle. If you want to set it up as a lean-to (Fig. 4), stake down points “B,” “A,” and “K.” Next, tie your ridgepole to points “F,” “L,” and “G.” Now tie the support poles to the ridgepole and raise the structure. Next, you’ll stake out points “E” and “H” as well as fold points “C” and “J” under. You will need several guy ropes for this setup, as the photo (opposite) shows.

I think an 8-by-16-foot tent would be the minimum practical size and a 10-by-20-foot design is great for two or three men and their gear.

All vertical pole lengths are to the tie point with point “A” or the ridgepole. You will want your actual vertical poles to be a foot longer. I use the same 10’ 6” pole for the one-pole setup and the miner’s tent model on my 10-by-20-foot canvas, marking the pole at the various lengths for easy setup.

For my tents, I add two rows of ties where the miner’s tent would close, along with an extra 4-inch-wide overlapping flap. I also reinforce the area around point “A” with an extra square of canvas about 1 foot deep and 2 feet wide, as this area takes a lot of strain when set up as a one-pole or a miner’s tent. I also put an extra loop between points “F” and “G,” known as point “L.” If you do the same, be sure it is placed so that the optional sod cloth folds underneath. 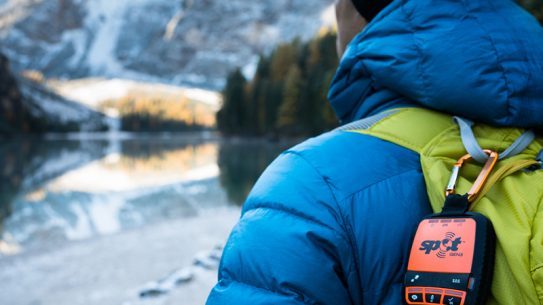 22 New Essential Items for Living Off the Grid

Whether you’re headed into the backwoods for a day trip or you’re bugging out...