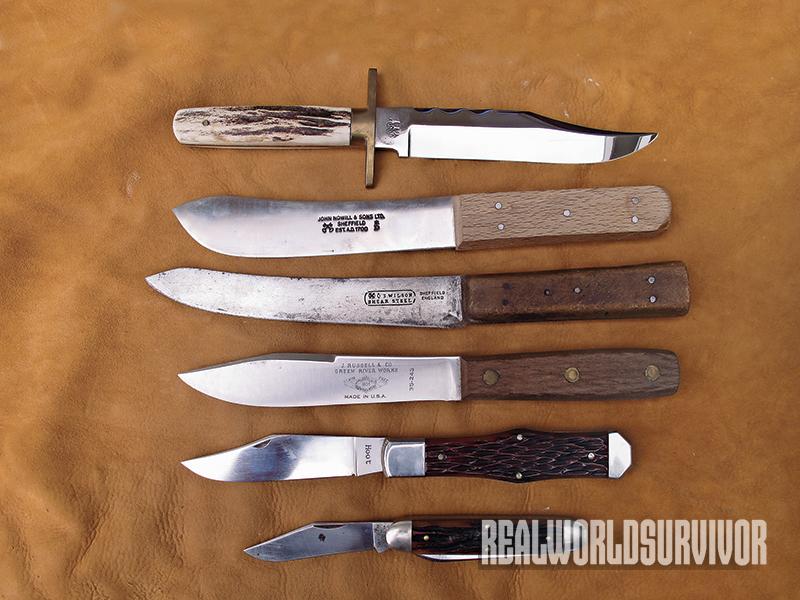 A collection of typical style late 19th century hunting knives.(From top to bottom) <br>1) A replica classic Sheffield Hunter’s Bowie. <br>2) A replica of the standard Sheffield-made, fur-trade-pattern butcher’s knife. <br>3) An original I. Wilson butcher that has seen many years of use as a hunter. This knife probably dates from around 1890-95. <br>4) A replica of the Russell Green River Hunter’s Butcher. Most 19th century cutlery companies made similar knives for outdoor use. <br>5) A modern Hoot Gibson custom replica of the “coke bottle” folding hunter that was very popular after the Civil War. <br>6) A two-blade, equal-end jack similar to the one Nessmuk recommended. These were often referred to as “Texas Jacks.” The term “Moose Jack” is more recent.
Comment(s)

What kind of blade did the average hunter in G.O. Shields’ period carry? Despite the fact most outdoor writers of the day had nothing but scorn for Bowies, they were still the most common sheath knives to be found in late 19th century sporting-goods catalogs. Any collection of Texas Ranger photos will also prove to you some pretty savvy characters seemed to find them useful on their long horse-mounted patrols. But while Rangers were well known for foraging wild game to supplement their state-issued rations, hunting was not a patrol’s primary reason for being in the field.

FIXED ORIGIN: A good case can be made that what we now think of as a generic fixed-blade hunter originated with the Marble’s Ideal model around 1900. Before that most “hunting knives” were more closely related to the standard meat-cutting patterns of the day. Other than not having the “bling” appeal of modern outdoor cutlery, this type of “butcher turned hunter” was totally efficient and very reasonably priced. The Russell Green Rivers are probably the most famous brand of these late 19th century blades, but Lamson & Goodnow as well as the I. Wilsons from England were equally popular. Any search through photos of hunters, as opposed to explorers, law enforcement or military personnel, will usually show most carrying a basic wood-handled hunter’s style butcher in a belt sheath.

COKE CLASSIC: Of course, many experienced outdoorsmen felt adequately equipped with a good folder rather than a belt knife. Then as now, a moderate-sized folder was handier for small game, birds and fish than a large sheath knife. Probably the most common “folding hunter” of the period was what modern collectors refer to as a “Coke bottle” pattern in both locking and non-locking versions. These normally run between 4 and 4.5 inches in blade length. There were also a variety of other large, single-blade, lock-back folders to choose from. As Nessmuk and Shields pointed out, it was equally hard to beat a good sturdy double-bladed jackknife for all-round utility in the field. In the end, skill and experience trumps equipment for most knife-related tasks. Frontier sportsmen and market hunters certainly had far more opportunities to develop their game-handling skills than we do today. 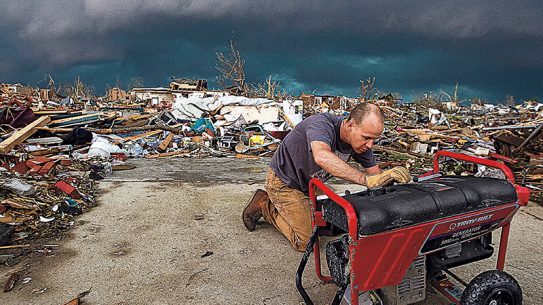 The right generator can save your life when the grid goes down.