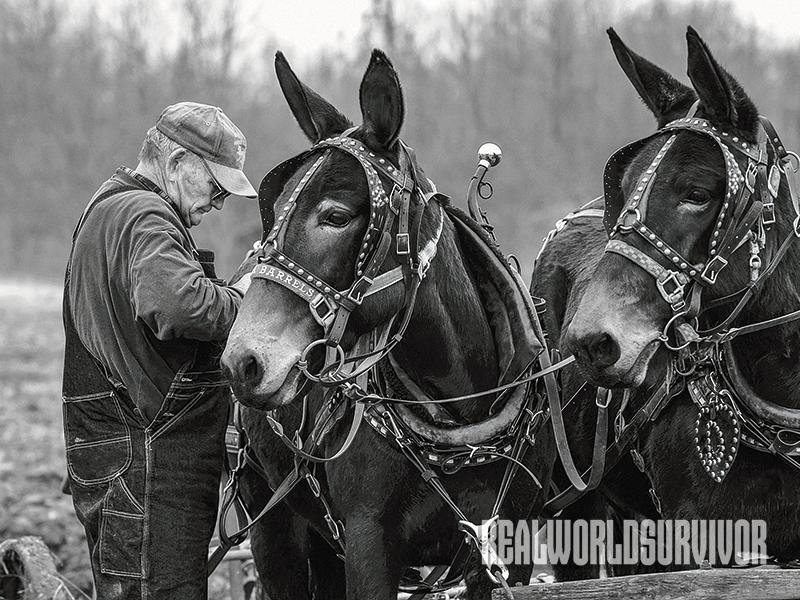 1 of 6
Photo by Larry Case
Mules Rule as Farmland Helpers
A pair of mules working a plowing exhibition at the Farnsley-Moreman House in Louisville, Kentucky. 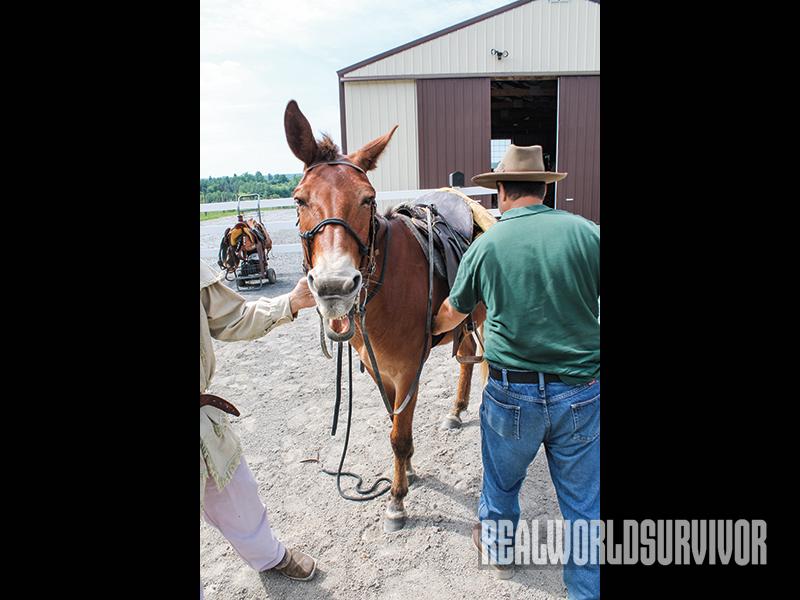 2 of 6
Mules Rule as Farmland Helpers
Johnny Walker of Ghent, West Virginia, saddles his mule Maytag. He says that a mule is a “superhorse with an incredible sense of self-preservation.” 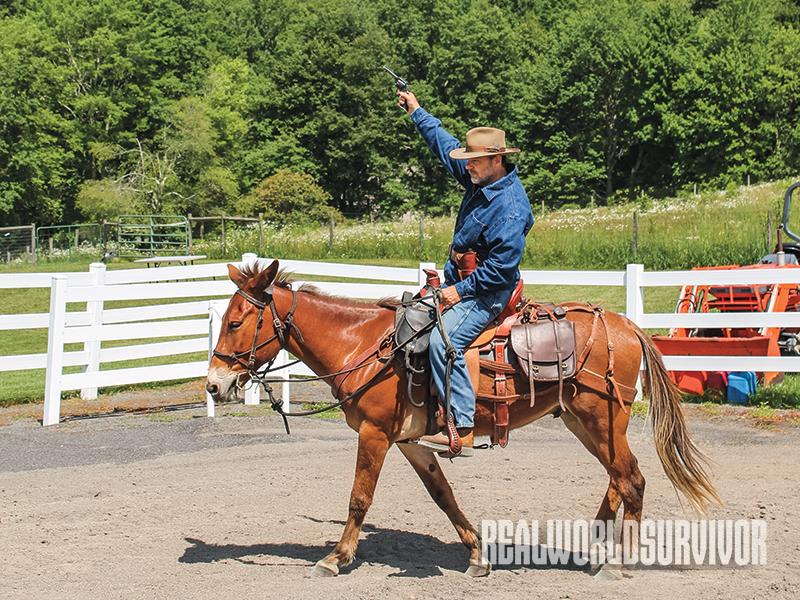 3 of 6
Photo by Larry Case
Mules Rule as Farmland Helpers
Johnny Walker shooting a pistol while riding Maytag. He trains all of his mules to accept gunfire while being ridden. He says that once a mule knows what needs to be done, it will submit to the rider’s wishes. 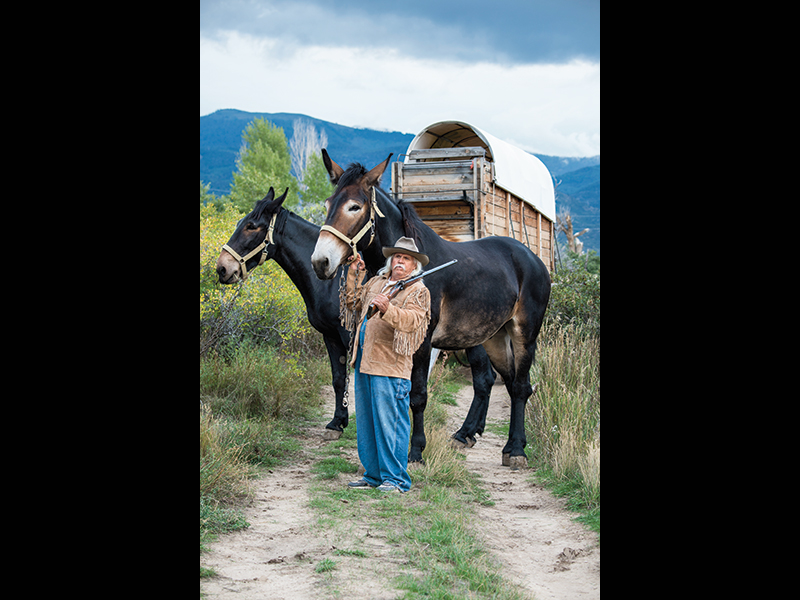 4 of 6
Photo by Jay Wiseman
Mules Rule as Farmland Helpers
At 19.2 hands (6’4”) and 18.2 hands (6’0”) at the shoulder, Howard Huge and Harvey Large are as incredible to look at as they are a versatile working team for mule skinner “Tennessee” John Stewart. 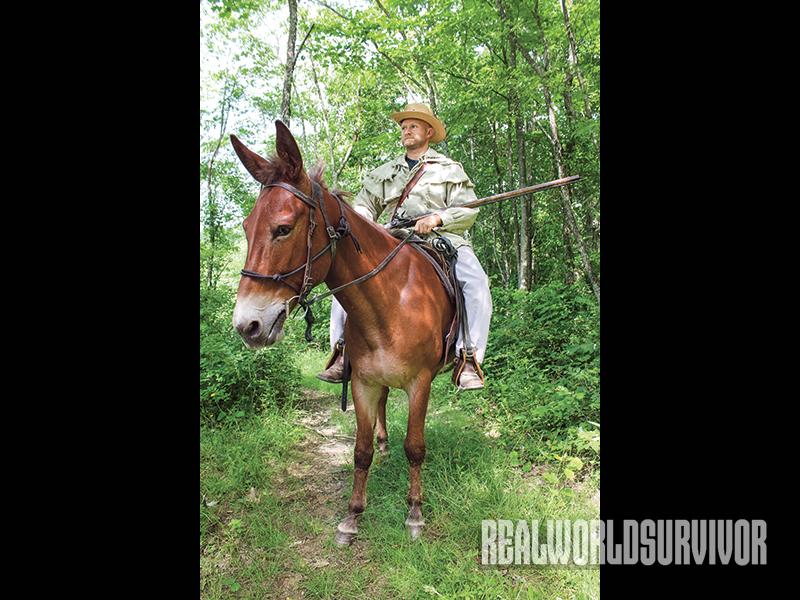 5 of 6
Photo by Larry Case
Mules Rule as Farmland Helpers
A rider on a red mule in full early American frontier dress. The early pioneers often chose mules to ride because they made a more sturdy, sure-footed, and dependable mount than a horse for the wilderness. 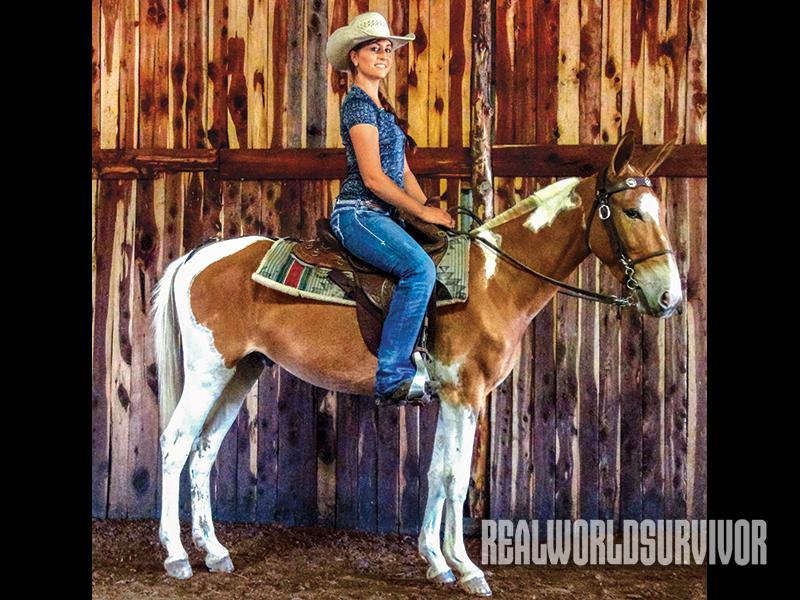 6 of 6
Photo by Larry Case
Mules Rule as Farmland Helpers
The Missouri Mule Company has developed a gaited mule, a cross between a jack and a Tennessee Walking Horse, for a super-sturdy trail ride in comfort. 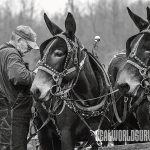 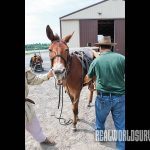 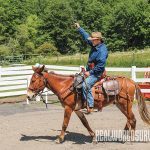 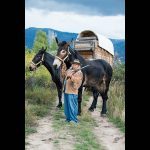 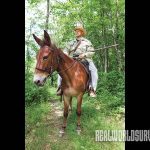 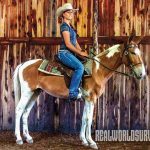 I am betting the mule is one of those animals you don’t think about much. Unless you were raised on a farm in Missouri or Kentucky, or somewhere that mules were actually used, they never enter your mind. The mule is certainly not glamorous or flashy. He doesn’t get the headlines or the limelight like a sleek thoroughbred racehorse. If anything, he may be thought of as somewhat of a clown in the equine world, but that is only by those who don’t really know what Mr. Mule is made of.

To folks who live in the riding, working and pack animal world, the mule is a pearl of great price. They know this hardy hybrid is a four-wheel-drive, no-frills, git-r-done, four-footed dynamo. Most mules are just plain smarter, harder working, more sure-footed with twice the endurance of any horse that ever mooched an apple from you.  (I should give the disclaimer right now—horse lovers may not like me very much after this article.)

Just what is a mule anyway? The mule is a hybrid, a cross between two different species of equines. A mule is the offspring of a male donkey (a jack) and a female horse (a mare). When a male horse is crossed with a female donkey, the resulting foal is called a hinny. Horses have 64 chromosomes and a donkey has 62. The mule offspring has 63. Mules can be either male or female, but, because of the odd number of chromosomes, they are unable to reproduce.

Most of us think that except for the long ears, horses and mules are much the same. People who raise and train mules know that the differences go deeper. Horses tend to look more “muscled up” than mules. Mules are incredibly strong, stronger than horses of equal size and weight, but their muscles appear to be sleeker. Think of a body builder compared to a long-distance runner.

Mules are also known for their incredible endurance, whether it be carrying a rider, packing weight or pulling a load. Mules get their athletic ability from the horse and their endurance and intelligence from the donkey. The sure-footedness of mules is legendary, making them the first choice for riding or pack animals on rocky and other precarious terrain.

Mules are said to get their redeeming characteristics from a genetic phenomenon known as hybrid vigor. Hybrid vigor is often noted when offspring seem to take the best traits from the two parents. Charles Darwin wrote, “The mule always appears to me a most surprising animal. That a hybrid should possess more reason, memory, obstinacy, social affection, powers of muscular endurance, and length of life than either of its parents, seems to indicate that art has here outdone nature.”

Mankind has used mules for thousands of years, but how did we first come to acquire this valuable, unusual, wonderful critter? According to the American Mule Museum, which keeps track of such things, mules first appeared in ancient Turkey, in the Nicaea region. Could the mule have occurred naturally in the wild? There were horses and donkeys present there. It is possible, but most mule experts think it is much more likely that the first crosses were planned by shrewd horse breeders of that time.

Ancient Egyptian history clearly shows the people using mules, (since before 3000 BC) and they used them for everything from beasts of burden to pulling chariots. Mules are noted in the annals of civilizations all over the ancient world. The warrior Hittites, Sumerians, ancient Greeks, the Romans and many others all left records of breeding, working and holding the mule in high esteem.

Records from these varied people show that the mule was considered very valuable, more costly than even a trained chariot horse. In the Bible, King David himself rode mules, and evidently only royalty were allowed to use them as mounts. Two Hebrew words for mule and hinny appear 17 times in the Old Testament. When the Israelites returned from captivity in Babylonia in 538 BC they brought many animals with them, including 245 mules!

No less than the father of our country, George Washington is largely responsible for the development of mules in colonial America. Washington was a gifted visionary in agriculture and animal husbandry. He knew how valuable mules would be in farming and as draft animals in the new country. The problem was, it was difficult to get good breeding stock for the donkey side of the mule equation. Small donkeys or burros were already present in the fledgling country, but Washington wanted the best breeding stock for the foundation of his mules.

The Spanish Government prohibited acquisition of the legendary Andalusian donkey. In 1785, things changed and King Charles III of Spain presented Washington with a gift of two jacks and two jennets (female donkeys). One of the jacks died during the voyage, but the survivor, named Royal Gift, went on to sire an American dynasty of mules. By the early 1900s, the mule population in this country had exploded to nearly six million.

In today’s ultra-modern, techno-crazy, computer-driven world, it is hard for us to imagine a time not so long ago when an animal like the mule could mean so much in everyday life. Mules plowed the fields and pulled the wagons to harvest the crops. Mules did the herculean work of bringing coal out of dark coal mines and were hitched up to many a saw log to get the timber out of the woods. From the Civil War through World War I, the United States military depended on mules to move anything big and heavy, including wagons, supplies and artillery.

The mule is an incredible hybrid animal capable of amazing feats of strength and endurance. But most of us don’t even think about riding or being mounted on a mule. People who trail ride in rugged country, however, know the mule is often the best choice for these conditions. Smart, agile and more sure-footed than any horse, a good riding mule has been the choice of hunters, lawmen, circuit riders and bandits. Mules have the raw materials to be extraordinary mounts, but they must be trained by someone who loves them and understands the basics of Mule Psychology 101.

“This mule loves me,” Johnny Walker said as he scratched behind the ear of Maytag, a red mule on his Ghent, West Virginia, farm. The feeling was evidently mutual and Maytag seemed perfectly content to lean against his arm as Johnny told me about the wonders of mules.

Johnny Walker is a paradox in a modern day world: a devout Christian who trains horses and mules, makes knives and mountain rifles and can shoot a rifle or pistol mounted as well as he does on foot. His people have been riding mules for 200 years.

“The mule is a ‘super horse’ with an incredible sense of self-preservation,” Johnny said. “Much more so than a horse, the mule is going to be very aware of what is around him and do whatever it takes to keep from getting hurt.”

Johnny Walker stressed that in training scenarios the mule is always asking, “Must we?” as in “Must we do this?” Once your mule sees that this is what we need to do for this session, then he will submit to your wishes.

As more Americans are introduced to the wonders of trail riding, more and more are looking at the mule instead of a horse. A level-headed, sure-footed mount is necessary, but many of us want something else—comfort. Tennessee Walking Horses and Missouri “Fox Trotter” horses are known for a smooth, even gait and comfortable ride. Why not cross the Walking Horse mare with a large jack? Now we have a “gaited” mule.

“My family has been involved with gaited equine for the past 50 years.” Bob Bingham, owner of the Missouri Mule Company, told me. “The last 20 years have been spent trail riding the Ozark Mountains around our Missouri home. I had been looking for a good gaited mule for some time and could not locate one,” he said. Desire for that mule and for a challenge in the equine world led Bob to produce some of the finest gaited trail mules in the country.

Missouri is famous for its Missouri Fox Trotter horses, and it has been a major supplier of mules to the USA and foreign countries for over 150 years. Inspired by those two facts, Bob Bingham founded the Missouri Mule Company. Since then, he has watched his mule colts develop from imprinting and other humane training techniques. These are not the kicking, biting outlaws of folklore. These mule colts respond to the privileged treatment that is standard in the horse world.

“We are developing a new mule when really it is the same mule that has always been there for us,” Bob said.

Need something on your homestead to pull a plow or a wagon, bring logs to your sawmill or serve as a packhorse and trail ride to boot? You need to take a look at Ol’ Long Ears, the mule. 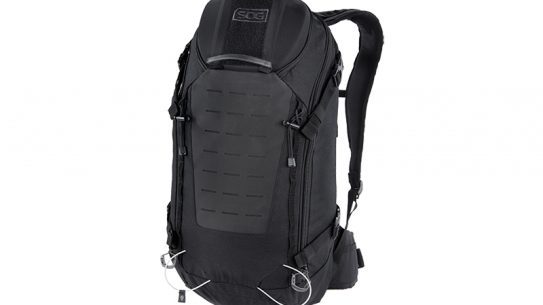