1 of 3
Photo by Team Rubicon
Team Rubicon Volunteers Help Disaster-Stricken Communities
A wave of Team Rubicon volunteers arrives in the Philippines to provide aid in the aftermath of Typhoon Haiyan.

The Carlton Complex fire that struck Washington State in the summer of 2014 was truly a once-in-a-lifetime disaster. In a matter of days, a few scattered lighting strikes had erupted into a blaze that swept across nearly 400,000 acres, decimating anything in its tracks. Before it was over, it would become the largest wildfire in the state’s history.

When that fire reached the small community of Pateros, with a population of barely 600, longtime residents had to evacuate in a matter of minutes, time enough only to find their families, grab a few personal effects and flee before the flames engulfed their homes. What they found when they returned more closely resembled a moonscape than their beloved community. Hundreds of cattle were dead. Nearly every road was destroyed. Neighborhoods were reduced to ash.

When the first wave of Operation Humble Trooper landed in Pateros, the community was in shock. Residents had been allowed home only a couple of days earlier, and there was so much work to be done that it was difficult to know where to start. Fortunately, the men and women who had just arrived were well trained to handle the crisis—first by the American military, and then by their brothers and sisters in Team Rubicon.

They started by going door to door, meeting the men, women and children of Pateros, and listening to their stories. Reflecting at the time on the events unfolding around him, Operation Humble Trooper volunteer and Navy veteran Gerod Aleshire recalls a woman he met early in his deployment: “We learned that her barn had caught fire with the animals still inside. She began to cry and couldn’t believe that veterans would fly from all around the country to help her for free.”

For many, the fire had left their homes and property damaged beyond repair. The first and most gut-wrenching task would be to clear the rubble. “No words were necessary once we began,” noted Aleshire. “We had a two-story house on a hillside burnt to the ground that we separated into metal and debris piles using nothing but some hand tools and a couple of wheelbarrows.”

For the next three weeks, Operation Humble Trooper volunteers worked alongside residents in temperatures upwards of 100 degrees to clear debris, restore road access, repair homes and jumpstart the long and difficult rebuilding process. As other volunteers poured in, sometimes unassociated with any organization and just wanting to help after hearing about the devastation, Team Rubicon took charge of managing their efforts.

Eventually, other aid organizations and governmental agencies took over the relief effort in Pateros, and Operation Humble Trooper was at an end.

Team Rubicon got its start in the aftermath of the 2010 earthquake in Haiti. As international NGOs scrambled to get a handle on the expanse of the crisis, retired Marines Jake Wood and William McNulty jumped into action. Taking charge in a crisis situation came naturally to them, and, even though their military deployment had ended, both felt a strong pull to help those in need. They wasted no time in reaching out to their personal network of friends and family, receiving not only financial aid for their mission but the support of six other veterans  and first responders who also wanted to help. Team Rubicon’s first volunteer mission was under way.

When they arrived in Haiti, Team Rubicon found a crisis on a massive scale. Aid organizations that had arrived in the hours and days after the earthquake were struggling to cope with the needs of urban environments, leaving thousands in more remote parts of the country without access to clean water or medical care. McNulty and Wood saw that there were huge gaps in coverage across the country left by existing aid groups and NGOs. They also realized that some of the skills that they had gained from working in war zones, such as the ability to adapt to difficult conditions, work with limited resources and maintain security in a dangerous environment, were just what was needed to fill the gap.

Eventually, international aid agencies began to get the situation under control. When that happened, Wood, McNulty and the rest of their team left, recognizing that their mission in Haiti had reached its natural end. But an even more important mission was beginning.

Working alongside aid organizations to provide relief in Haiti had given Wood and McNulty a sense of purpose, and they wanted to share that sense of purpose with other veterans. They also knew that the qualities that had made them so effective in Haiti, as well as their drive for civic duty, were shared by thousands of other veterans across the country. All that was needed was an organization that could harness that potential.

Today, Team Rubicon claims over 30,000 volunteers from different military backgrounds and various walks of civilian life. They were in New York after Hurricane Sandy hit; they helped the men and women of Joplin pick up the pieces after the tornado of 2011; and they were on hand to help dry out South Carolina after the flooding of 2015 in Operation: Palmetto Punch.

The veterans that make up Team Rubicon went on to do a wide variety of different things with their lives when their military service was at an end. Today, they are engineers, chefs, parents, students, project managers and even CEOs. But despite this, every year, thousands take time away from busy lives to ensure that their communities are given the support they need to recover from disasters. Even for the organizers at Team Rubicon, their dedication is astounding.

“They sacrifice their vacation days, answer texts in the middle of the night and incessantly scan weather reports to ensure we can do the most good on the ground where we’re needed,” said Bobbi Snethen, a longtime member of Team Rubicon’s digital outreach. “It’s remarkable. Our volunteers have built this organization from eight to 30,000 members in less than six years.”

This rapid growth is in part due to veterans’ own sense of civic duty. Many find themselves lacking the sense of purpose that military life embedded into their day-to-day routines. Team Rubicon helps them to get that back, equipping them to help communities across the country and the world recover after the worst has happened. “Every member who puts on a grey shirt and raises their hand to serve their community wants to be a part of something bigger than themselves,” said Snethen. “Service runs in their DNA.”

From the beginning, Wood and McNulty knew that if they could blend military veterans’ instinct for civic duty and vast experience in crisis situations with the skills and training of first responders, they would have a formidable force. To that end, they ensure that all members are able to complete disaster response training, as well as incident response training, leadership training and more. This means that Team Rubicon is able to provide disaster victims with the best of civilian and military training currently available.

And while most of their work is domestic, many members of Team Rubicon have also travelled internationally to help in humanitarian relief scenarios, bringing their professionalism and experience to the aftermath of flooding in Pakistan, cyclones in the Philippines and the 2015 earthquake in Nepal.

To keep the organization nimble, and to best fulfill its mission of bridging the gap between the initial disaster and the relief responses of other organizations, Team Rubicon depends on both its members’ dedication and geographic dispersal. At headquarters, potential disasters like growing hurricanes, spreading wildfires and deadly tornadoes are monitored, and an alert is sent out via social media to volunteers in the affected areas. That way, should the worst happen, Team Rubicon is ready to deploy at a moment’s notice, and hit the ground running with a minimum of lag time when the need is greatest. For more info, call 310-640-8787 or visit teamrubiconusa.org. 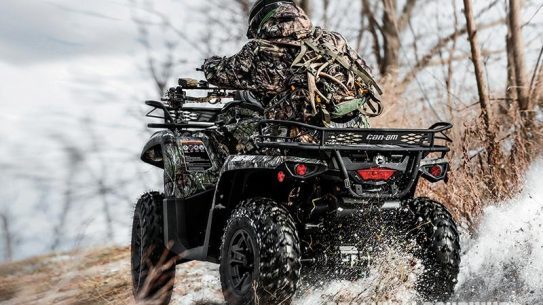 It’s time to step up to four wheels and a lot more utility!