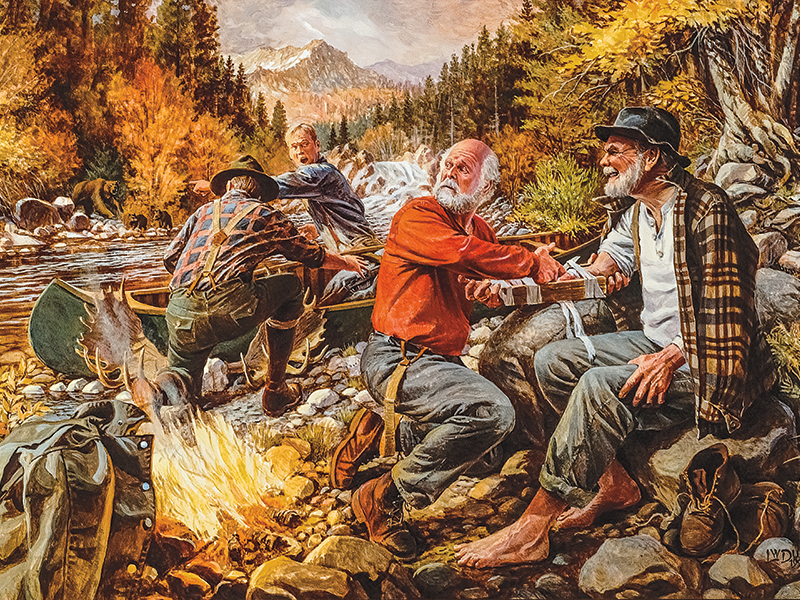 1 of 5
Photo by Remington Museum
Larry Duke’s “A Break In The Action”
Stabilizing a broken bone before attempting to move an injured person can make the difference between a few weeks of discomfort and permanent disability. Accidents often happen in the wrong places at bad times, but there are things that can be done to improve the situation. Splints can be made from whatever is available, including padded pieces of wood, a rolled up magazine or anything that can provide stability and protection to the injured limb. 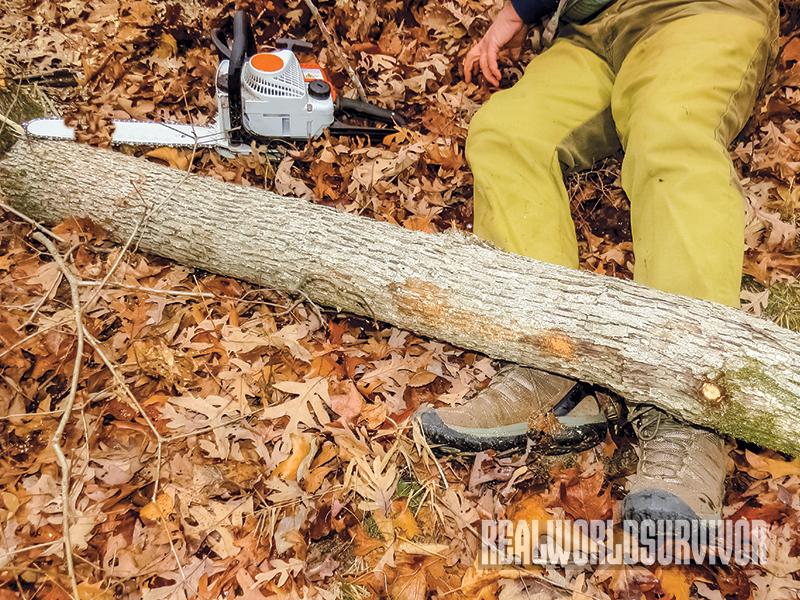 2 of 5
Backwoods Critical Care
“I was flat on my back and the tree trunk was lying across my leg,” said Gregg. Danny and Josh lifted the trunk off him, and Gregg slid from underneath it. 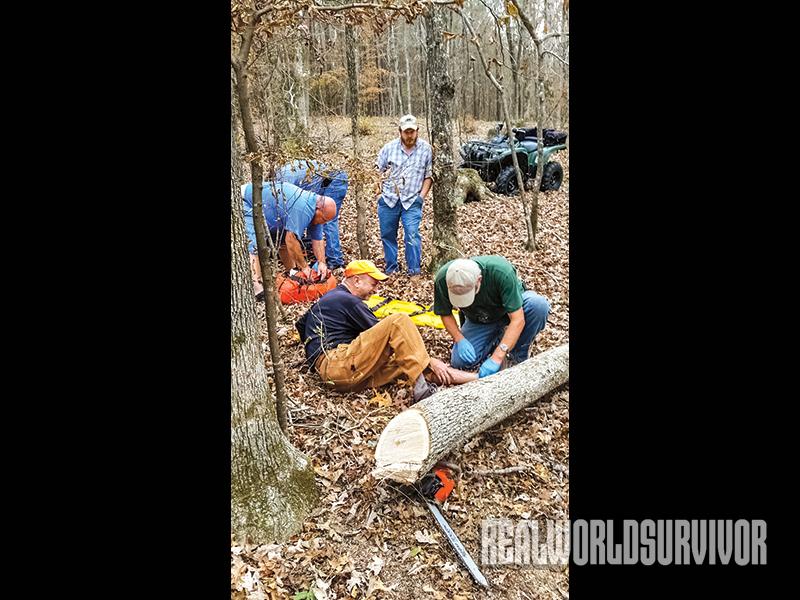 3 of 5
Backwoods Critical Care
While one first responder assesses Gregg’s situation, another looks for a soft splint. They then decided how to get Gregg up the sharp slope. 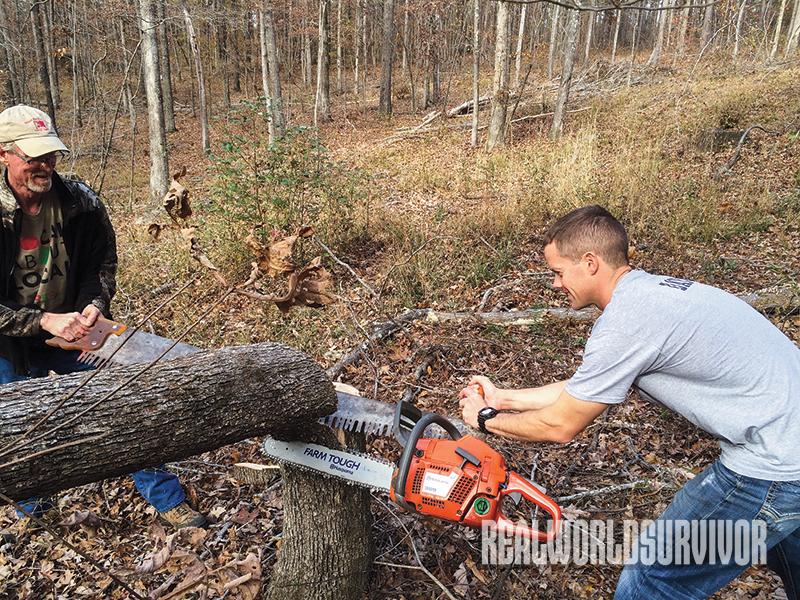 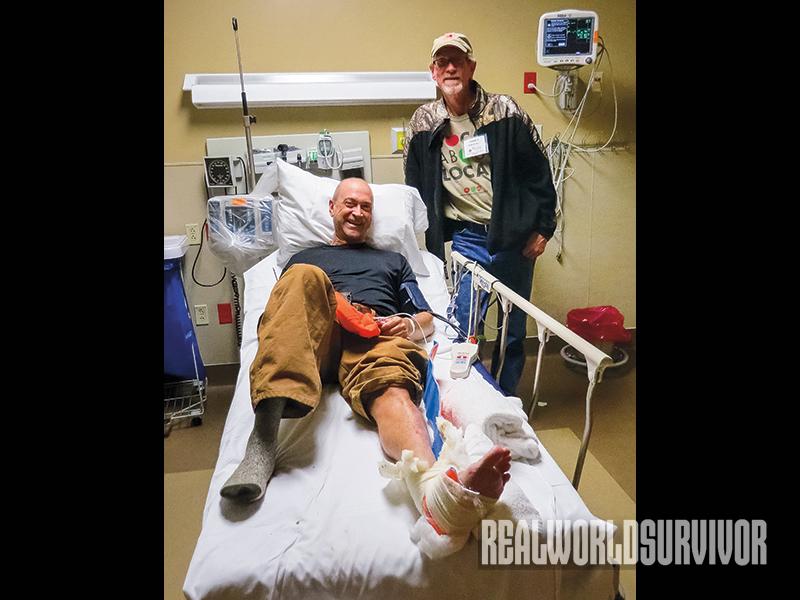 5 of 5
Backwoods Critical Care
Gregg and Danny are all smiles in the hospital. Gregg underwent surgery that pinned his broken leg bones together. 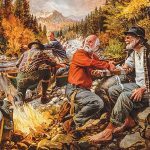 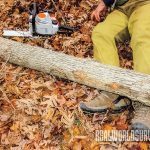 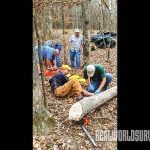 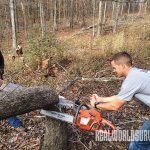 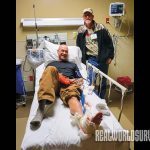 Come quick. I need you!” Danny Day’s voice held an edge of panic, something I’d never heard before in my usually calm and collected friend. “We were cutting firewood. The chainsaw got stuck in a partially cut tree. Josh and I were using the cross-cut to free it when the tree butt snapped back and caught Gregg just above his ankle. His leg is broken.”

The day before, the four of us had arrived at the Day family tree farm in McNairy County, Tennessee, for the opening week of deer gun season with hopes of a great opening morning. After the luckless early hunt Saturday, we returned to the farmhouse for breakfast. Danny suggested cutting firewood for a campfire before hunting in the late afternoon. An hour later, the accident happened.

The chainsaw got wedged partway through a leaning tree. Danny had asked Gregg Walker to hold the chainsaw and slide it out when the tree started to go over. When the accident happened, Danny felt both terrible and responsible.

When I caught up to him, Danny was running back and forth into various barns and outbuildings, dashing around like a squirrel in love. He was panting and gasping.

“Josh sent me to get splints and something to fasten them with. All I could find were these 1×1 stakes,” Danny rasped out. “Gregg’s halfway up a green road and way down the side of the hill. I called our neighbors, the Crabbs, who are with the fire department, but no answer. Then I called Dad, and asked him to call McNairy County Fire and Rescue since I don’t think 911 can track cell phones.” Danny had gotten a lot done in the few minutes it took to get back to the house.

We loaded up and headed back to the scene of the accident as fast as the truck would go on the rough hillside. This wasn’t the best way to traverse a plowed expanse that could be called a path only by the widest possible definition.

“I can’t stand to see a human, especially my friend, in pain,” Danny said afterward. “I hurt with Gregg the whole way through this deal, maybe more so.”

Josh Day is a Memphis police officer and TACT team member who is also trained as an EMT. He is used to dealing with life-or-death situations, so a broken leg didn’t faze him. He’s a useful man to have around in a riot, an armed insurrection or, in this case, a medical emergency.

Josh and Gregg Walker were comfortably stretched out on the hillside talking and joking. Gregg wasn’t in acute pain or even much discomfort, as long as he didn’t try to move his leg.

The snapping butt of the tree trunk hit his leg as it kicked out in the opposite direction from where it was supposed to go. No bones were sticking out; there was just an obvious disconnect between his foot bones and the dog-leg in his leg.

“I was just in the wrong place, but it all happened so quickly,” Gregg said. “I remember hearing a crack—the tree breaking, not my leg—and the next thing I know, I was flat on my back and the tree trunk was lying across my legs. Danny and Josh lifted the tree off me and I slid myself out from underneath as quickly as I could.”

Gregg’s right leg was fine, but his left foot was at about a 45-degree angle to the rest of his leg.

“It was broken” Gregg explained. “I saw my foot and knew it was broken straight through, even though I had never broken a bone in my 56-year-old body.”

A look at his wrong-way foot made Gregg gag, but he quickly settled down. A calm, well-trained companion nearby made the situation much easier to handle.

“Having Josh there was very reassuring,” Gregg said. “I may have been hurt, but one of 24 Memphis TACT Team officers was right there. Josh had told plenty of EMS stories, so I knew he had the training and was extremely capable. His confident demeanor was contagious.”

Gregg quickly calmed down when he realized he was all right and in—much to his surprise—little pain.

“There was really nothing to do but lay there and wait,” Gregg said. “Josh monitored my vitals and made sure blood was flowing to my foot and toes.”

As he was parking the truck, Danny received a call from the local 911 emergency dispatch, so I carried the cobbled-together first-aid equipment down the slope while Danny provided information.

“The paramedic on the phone asked for information. I gave him what info I could,” Danny explained. “But as I reached Josh and Gregg, I gave Josh the phone to give detailed info to the paramedic. Josh put down the phone and told me the help was at the house and to go retrieve them.”

When he got to the road, a truck was flashing its lights, flagging Danny down. The driver radioed the others. Within minutes, four or five vehicles loaded with first responders from the fire department drove up the green road, followed by a lumbering ambulance. One of the guys unloaded a four-wheeler and they all puffed down the steep slope.

“We’ve got to find something else for Danny to do or he’s going to burst a blood vessel,” Josh whispered. “Two medical emergencies would be too much. Think of something.”

“Danny, take pictures. This is a huge event in Happy Days history,” I suggested, following through on Josh’s plan to give Danny a job. “You need a picture of the rescue in the farmhouse.”

Once Danny started taking pictures using his cell phone, he trued up and calmed down.

“Where’s the treestand he fell out of?” one of the firemen asked, referring to Gregg. “Has to be, it’s the first day of deer season. Plus, that’s what Papaw Day said.”

Josh explained that it was a tree-cutting accident, not a treestand fall, and the fire and rescue guys breathed a collective sigh of relief. We even had proof; the evidence was still in place. The orange chainsaw was still buried under the fallen tree and the cross-cut saw was nearby. The final proof was that there was no treestand close by. The facts spoke for themselves. Evidently, the paperwork and bad press on hunting accidents is something the fire department guys didn’t want to deal with.

Meanwhile, the firemen assessed Gregg and got his version of the events. The next decision was how to get Gregg up the sharp slope. It was a close vote, but they finally decided it would be best to carry him up on a backboard rather than trying to balance the backboard on the four-wheeler.

Moments later, a rumble went through the crowd of first responders. “Do you have a soft splint?” After checking all of their kits, one of the firemen finally found the needed bandage. If they hadn’t, Danny’s stakes might have been used after all.

Gregg went through some rough moments as the firemen stabilized his leg with the rigid dressing and fastened a roll bandage around his leg and the splint to hold it in place. Getting him on the backboard was also uncomfortable, but not nearly as painful as the stabilization process.

Five of the firemen and Josh managed to carry Gregg up to the waiting ambulance attendants with no major jarring or groans from the patient.

After some discussion, the ambulance personnel decided to take Gregg across the state line to Magnolia Regional Hospital in Corinth, Mississippi, since they had surgeons on staff. Finally, Gregg was loaded aboard the ambulance—it turned around and turtled its way down the now muddy track, lights flashing like it was expecting to run through a red light.

The following Monday, Gregg had surgery and the broken leg bones were pinned back together. A few days later, he was able to head back to Louisville, Kentucky.

In all, it was a successful outcome to what could have been a horrible situation. “We were extremely lucky that the McNairy County fire and rescue had such well-trained, hard-working first responders who were willing to give up their Saturday to help someone in trouble and that my cousin Josh was at the scene,” Danny said. “This accident worked out well because a lot of people came together to make a bad situation better.” 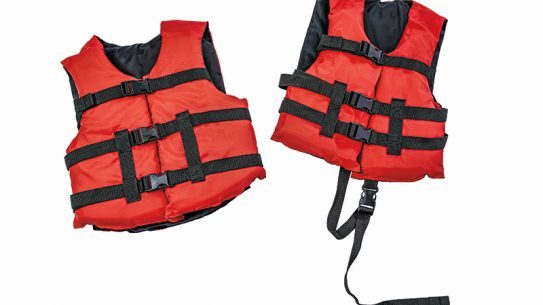 Check out the gear you need to stay safe while on the ice.