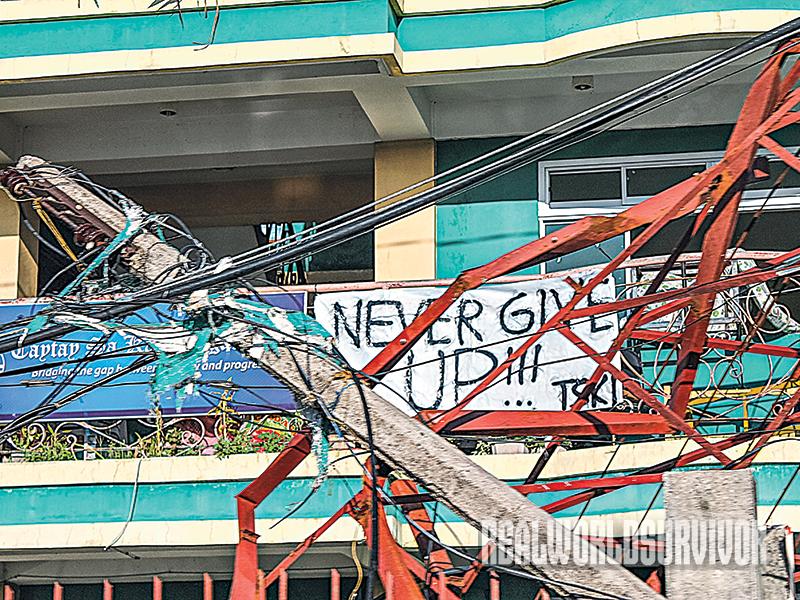 Photo by Art Merrill
The day after we got back home…one of the most powerful typhoons in history smashed dead-center into our town.
Comment(s)

When we prepare for a natural disaster, how many of us visualize starving, being homeless or even assaulted? As it turned out, I didn’t prepare well enough, but I wonder if anyone could have prepared adequately for Typhoon Yolanda.

I traveled to the Philippines in August 2013 to marry my wife and enjoy a scuba-diving honeymoon. Glendelou and I married in late October and honeymooned on
the island of Palawan. The day after we got back home to Dulag, in the province of Leyte, one of the most powerful typhoons in history smashed dead-center into our town.

I’ve been through several hurricanes and typhoons, so I knew to make sure there was plenty of propane for the stove, to fill a couple barrels with water and stock extra batteries, candles and canned food in case the electricity went off for a couple of days. But Yolanda—also known as Haiyan—was way off the scale.

After the typhoon passed, everyone had a survival story to tell. Glendelou’s 79-year-old grandmother and nine other family members crouched under the big dining room table after Typhoon Yolanda tore her roof off; four adults hung on to the table’s legs to keep the table from flying away. Before all of the cell phone towers failed, the last text from Glendelou’s cousin said, “I can hear the waves from the beach getting louder. They are almost at the house! I’m so afraid!”

Surviving the storm itself was just the precursor to surviving the aftermath: total destruction, the complete collapse of all infrastructure and social norms, massive homelessness, escaped convicts, murderous mobs, martial law, impassable roads, bandits when the roads cleared, and no food, communications or electricity. We were very fortunate in that our rental home, made of concrete, survived almost completely intact, but Glendelou’s family home, like 99-percent of Leyte’s homes, was no match for Yolanda’s 160-mph winds. Had they been in their home instead of ours, collapsing walls would have certainly injured or killed someone. After the storm, 11 of us shared our one-bedroom rental house.

The day after the typhoon, word of escaped convicts became our most pressing concern, even above finding food. Our first defense was the courtyard walls around our home. We laid salvaged, twisted roofing tin against the interior and exterior walls and on the ground so that anyone climbing over would make noise to alert us. Inside, we had three zanzibars (Filipino machetes) and a few makeshift clubs, as well as flashlights and a spray can of insecticide to blind attackers. For the rest of my time there, I slept lightly with my zanzibar and flashlight at hand. Every nighttime breeze that rattled the roofing tin startled me awake.

For days after the storm the roads were impassable. The power line poles seemed invariably to have fallen across the roads, not away from them—and not just a few poles, but hundreds of them.

After the first day there was no more food to buy anywhere. The Philippines’ word-of-mouth “bamboo telegraph” became our only means of communication, and four days later a half-dozen other men and myself garnered a flatbed truck, scrounged some diesel fuel and drove four hours over the mountains to Maasin, where we found a bank and a grocery store that had generators. There was also a cell phone signal, and I was finally able to contact family back home and tell them I was alive. I would make three more such trips to Maasin to bring home six 50-kilo bags of rice and many boxes of groceries. On one trip the truck overheated. A broken-down truck loaded with food attracts attention; some strangers came over to gauge our situation, but we apparently had enough men of our own to discourage any banditry.

Dulag’s first relief came from a U.S. Navy Seahawk helicopter that landed on the elementary school’s grounds. Though they couldn’t possibly carry enough of anything for Dulag’s 47,000 residents, the Navy brought something incredibly valuable and palpable: a sense that help is on the way, that law and order still exists, and that someone cared. Overnight, a sprinkling of American flags sprouted up in Dulag, a “thank you” to the aircrews. The helicopters and V-22 Ospreys made many drop-offs of relief goods in Dulag over the next week or so.

But relief food also brought misfortune. The bamboo telegraph reported that an angry mob formed at the home of the mayor of Tanauan, accusing him of withholding relief food, and someone stabbed him to death. In Dulag, I saw relief goods pile up in the shattered municipality building, disappear during distribution and then pile up again.

A week after the storm, our tiny, battery-operated radio reported that military aircraft were evacuating foreigners from the Tacloban airport, so I had a possible way out. But traveling to Tacloban was not safe. Bandits near Palo had already robbed our neighbor’s adult son, stealing his motorcycle and his money. Being a foreigner, I was a prime target, so when I hired a neighbor to drive me to the airport, I rode in the back of the truck, covering my white face with a hat, T-shirt and sunglasses, as men sometimes do in Leyte.

It was 16 miles of sweeping, total destruction to Tacloban. The winds had flattened or shredded everything, and the storm surge had contributed its own sickly horrors. Palo and Tacloban had something Dulag did not—mass graves beside the highway. With so many thousands dead as a result of the storm there was nothing else to be done.

Along the roadside, children held their hands out to passing vehicles, begging for coins. Families were living beside the road in tiny shelters cobbled together from storm debris because the raised roadbed was the only ground not flooded. Downed power lines were now being used for drying clothes.

The airport terminal building was a wreck of smashed concrete and twisted rebar, but relief workers from around the world were setting up shop. I talked to some United States Marines who said my military retiree ID card would get me a seat on a C-130 when I was ready to leave. But the plane ultimately left before I did, and I was stranded.

By the time my visa expired in December, I had done all I could do for my new family, and first-come-basis airline flights were serving Tacloban. From the U.S. I could send money for necessities and to rebuild the family homes in Dulag while their day-to-day survival continued. Cell phone service remained intermittant and electricity would not return to Dulag for five months, showing that survival situations may last much longer than we can possibly imagine. 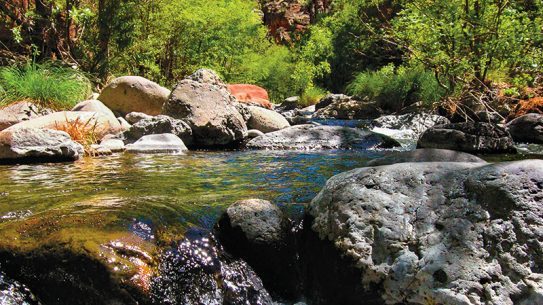 Tap Into Free Spring Water For Your Plants and Animals

Find out if conditions on your property are right to spring-feed your thirsty plants...