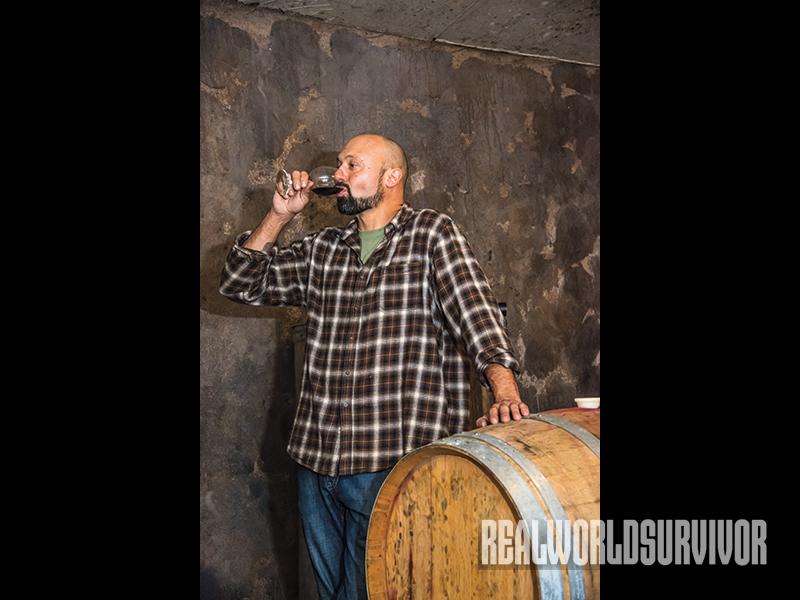 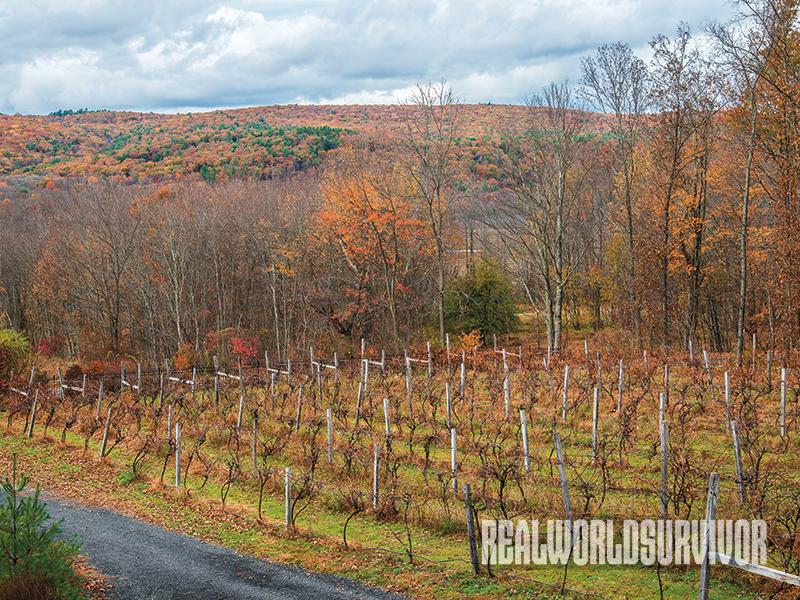 2 of 10
Photo by Thomas Kirchen
The Blue Collar Winemaker of BashaKill Vineyards
Some of the vines in Paul’s vineyard are next to the driveway leading to the winery and outdoor tasting areas. Harvest is over and the vines will sleep through the winter until spring. 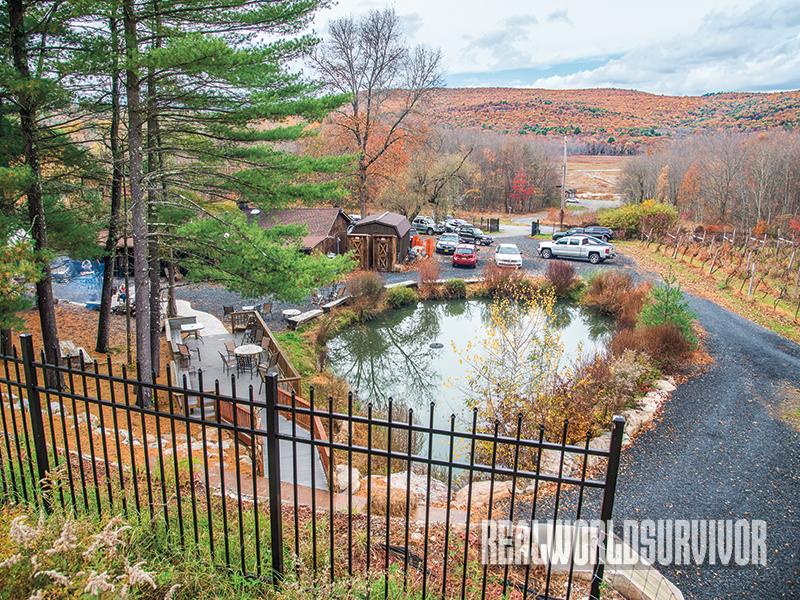 3 of 10
Photo by Thomas Kirchen
The Blue Collar Winemaker of BashaKill Vineyards
In the background, just in front of the beautiful mountains of the Hudson Valley, is part of the Basha Kill Wetlands, the largest freshwater wetland in Southeastern New York. The Basha Kill creates a microclimate that allows Paul to grow his quality wine grapes. 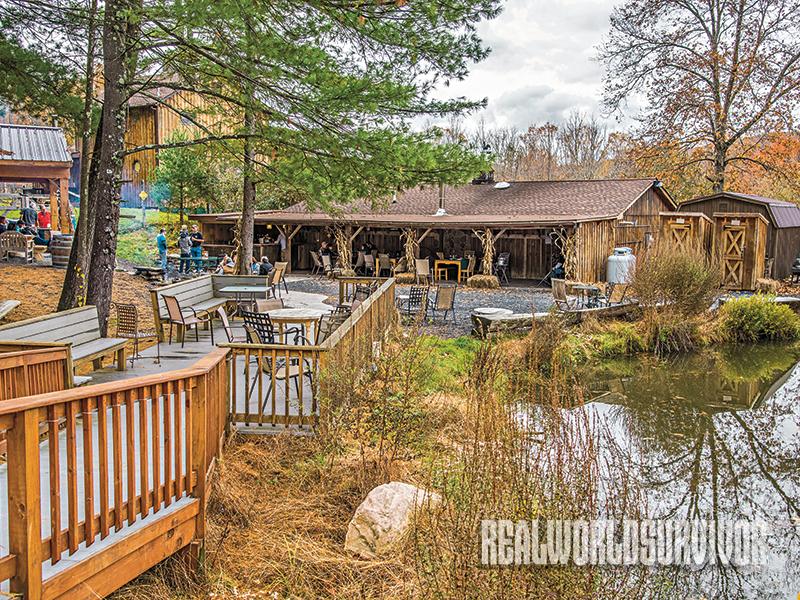 4 of 10
Photo by Thomas Kirchen
The Blue Collar Winemaker of BashaKill Vineyards
The view of the outdoor sitting areas and tasting room from the the hillside above it. Paul uses the pond to irrigate the grapes. 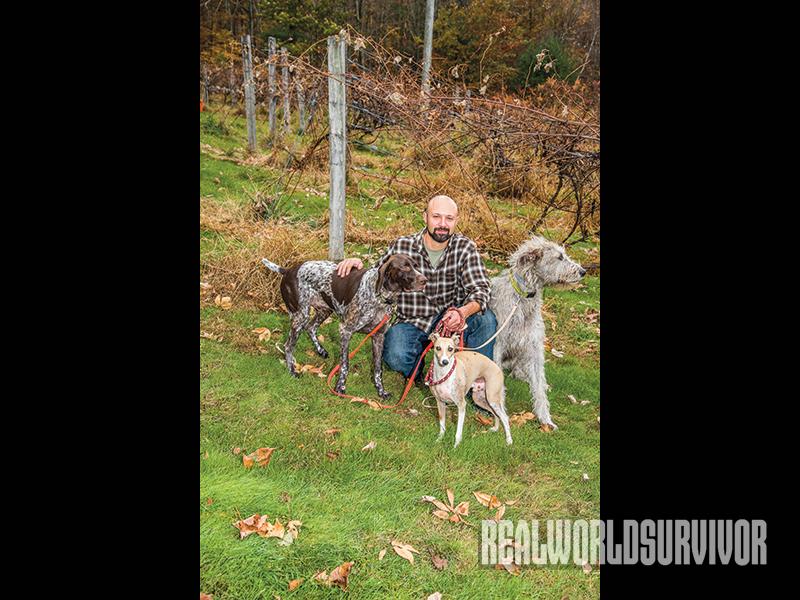 5 of 10
Photo by Thomas Kirchen
The Blue Collar Winemaker of BashaKill Vineyards
Paul Deninno in front of some vines with his dogs, Dario, left, Walter, in the middle, and Teagan. 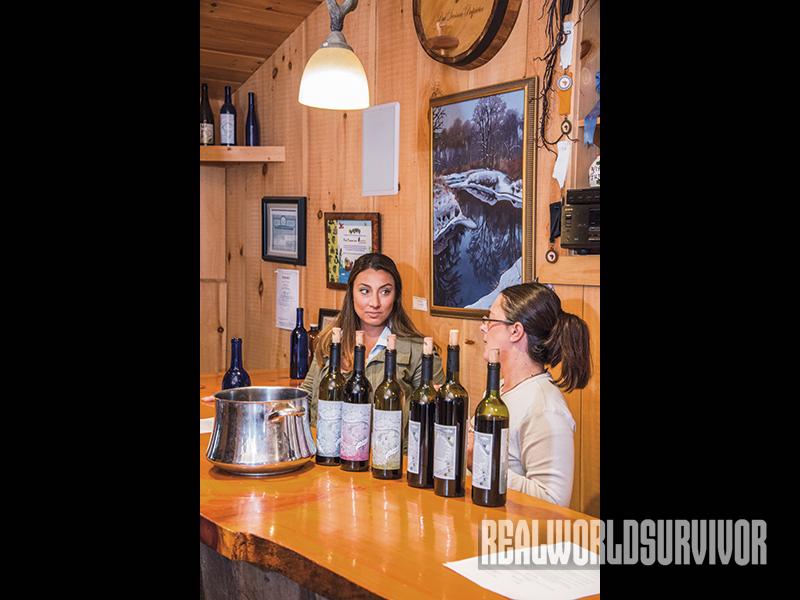 6 of 10
Photo by Thomas Kirchen
The Blue Collar Winemaker of BashaKill Vineyards
Christine Caruso and the Aylssa Wagner help Paul in the tasting room on weekends. Guests can sample all the BashaKill wines. 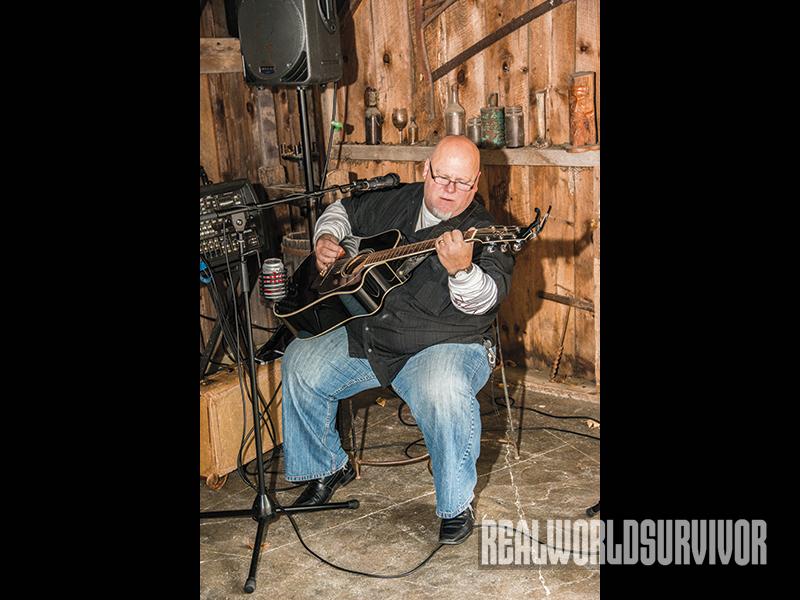 7 of 10
Photo by Thomas Kirchen
The Blue Collar Winemaker of BashaKill Vineyards
Local musician Jereme Langdale plays a mean guitar and sings for visitors on a Sunday afternoon. 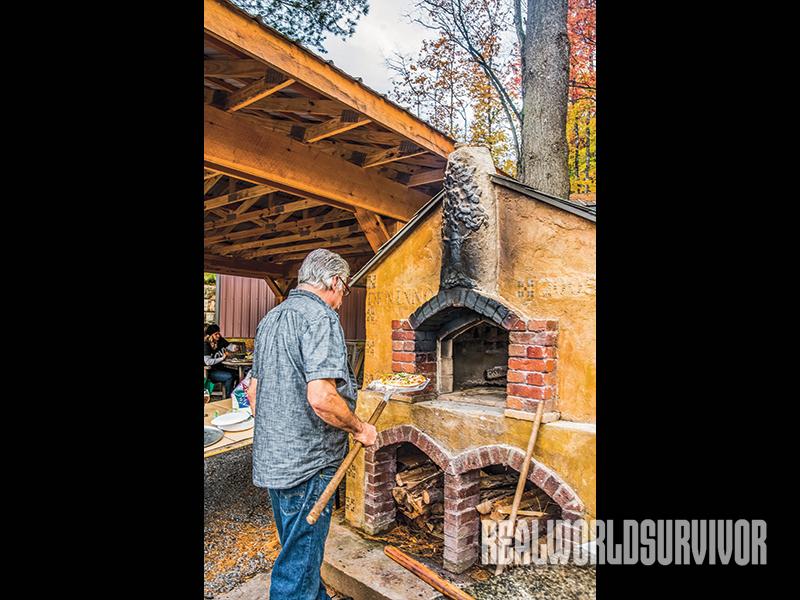 8 of 10
Photo by Thomas Kirchen
The Blue Collar Winemaker of BashaKill Vineyards
Pizza chef Joe Persampie puts one in the brick oven for a hungry winery visitor. Paul and a friend built the oven in 2005. 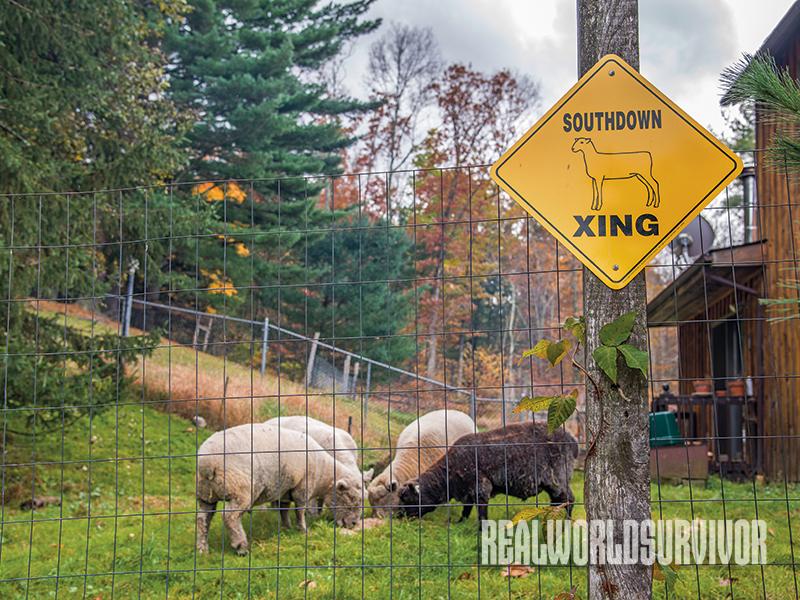 9 of 10
Photo by Thomas Kirchen
The Blue Collar Winemaker of BashaKill Vineyards
Paul’s Baby Doll (a.k.a. Southdown) sheep munch on grass in a field next to the outdoor patio area. A heritage breed, they are used as weeders in vineyards because of their short stature. Paul’s home is in the background. 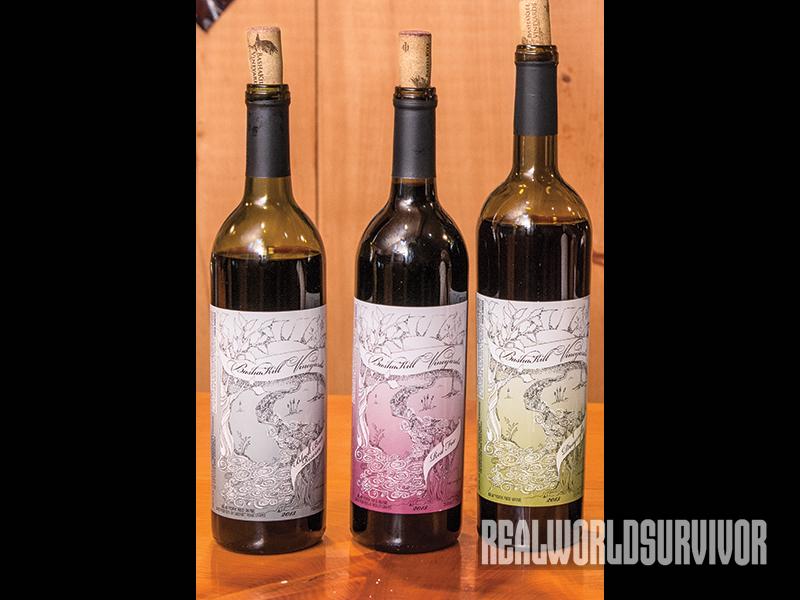 10 of 10
Photo by Thomas Kirchen
The Blue Collar Winemaker of BashaKill Vineyards
On the Sunday that <em>TNP</em> visited BashaKill Vineyards, these were three of the wines being served in the tasting room. From left to right: Black Bear Reserve, Red Fox, and Dragonfly. 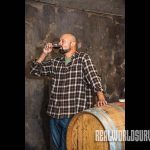 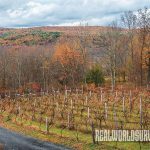 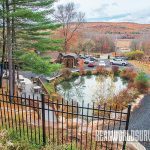 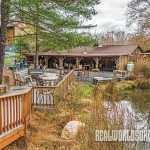 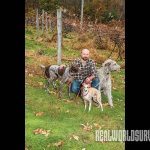 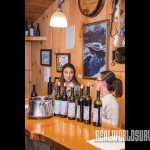 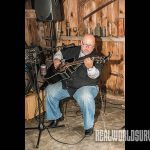 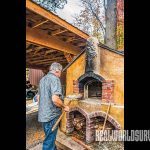 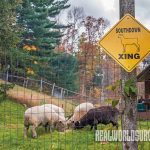 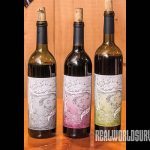 If you are a one-man show like Paul Deninno, owning a small winery requires you to be everything from a skilled vineyard worker and winemaker to a Mr. Fix-It and truck driver. BashaKill Vineyards in Wurtsboro, New York, is his creation. He planted the vineyard himself, designed his garage-turned-winery, his cellar built into the side of a hill and his tasting room, doing much of the labor himself. Listen to him chat with visitors at the winery and you assume that he grew up in a winemaking family, went to UC Davis to study viticulture and oenology, worked at wineries in Europe to hone his craft, then branched out on his own.

Not one of those assumptions is true, although he did grow up in a close-knit Italian family where drinking wine was a given. In a curious way, a serious accident led to his interest in winemaking. A diesel mechanic employed by a phone company in New Jersey, he was working on an engine when a crane fell on him, hitting his back and pelvis, causing six fractures in his hips. He was lucky to be alive, but his career as a diesel mechanic was over. The dot.com boom of the 1990s was on and he started taking night classes in internet technology while going to rehab during the day, then landed a job doing computer networking. But sitting in an office all day in front of a computer screen was not for him. “I wanted to do something different,” he said.

Call Of The Wild

Exactly what, Paul didn’t know. A lover of the outdoors, of hunting and fishing, he enjoyed visiting his grandparents, who had an egg business near what is now his winery. “Just before 9/11, I was there and saw 10+ acres nearby for sale. It was a boat rental place for the nearby Basha Kill Wetlands but zoned for agriculture. I made an offer and bought the place right around 9/11. It took every penny I had, but I wanted a place where I could get away on weekends.”

Soon after buying the property in 2001, the dot.com bubble burst and the company he worked for in New Jersey fell on hard times. It relocated, and his commute was 180 miles per day. Happy to have a job, he took a pay cut but was still dissatisfied.

His spirits sank lower in 2002, when his father died. By this time Paul’s palate had developed beyond the jug-wine days of earlier years to an appreciation for California’s finest. He went west, hoping that a trip to visit wineries in Napa Valley would be a tonic. While there, people in the business kept telling him how big the wine region in New York was. He describes that visit as “the push I needed” and decided to learn more about grape growing and winemaking. But he had a limited amount of time to spare, since he was still working for the IT company. Then, in 2005, his job was outsourced to the Ukraine. “That was the best thing that ever happened to me,” he noted.

He left New Jersey and moved into the Basha Kill house and got serious about growing grapes and making wine. “I started taking classes at Cornell. An old farmer did a site survey for my property and it turned out that my property had a good microclimate for grapes. I planted the first 300 vines and in 2007 got a winery license. BashaKill Vineyards was Sullivan County’s first licensed farm winery.”

Knowing that he was growing grapes in a cold climate, he was smart to take classes at Cornell instead of UC Davis, because the university had done pioneering research to determine the best viticultural techniques for cold climates, developed cold-hardy hybrids, and has a first class oenology department. “I learned a lot about winemaking there,” Paul tells people who ask how he became so skilled.

But there was more to it than taking classes. His commitment to growing organically occurred after his mother died of cancer in 2006. “I try to eat healthy, forage for mushrooms, grow my own vegetables, eat wild game. I like drinking wine, but you don’t know what’s in it unless you ask the grower or vintner,” he said. His vineyard is organic and he buys only grapes grown sustainably from other vineyards.

Growing grapes organically is difficult, especially in New York’s climate where winter freeze damage, black rot, powdery mildew and Japanese beetles are a big problem. For weed control, Paul uses Baby Doll sheep, also called Southdown, putting them into the vineyard from April to June when the weeds are the most vigorous, then keeping them out until after harvest.

He converted his garage into a winery, designing it and doing a lot of the work himself. Today he says that he would have done it differently if he had a chance to start over. “For one thing, I would have built a bigger building before starting anything.”

His training as a mechanic has been invaluable, because he knows how to make repairs and keep the winery equipment running. As for his winemaking, he has what all good winemakers need: a discriminating palate. No doubt his early exposure to wine helped, but a fine palate is a gift, a talent that gets refined through experience.

Paul uses Cornell hybrids, German and French varieties in his wines, naming each for wildlife in the wetlands below the winery. Among them are Wood Duck, his prize-winning chardonnay, the two organic wines from his vineyard, Estate Bald Eagle and Estate White Tail. Raven is a port made from Noiret, one of the first winegrape hybrids developed at Cornell for growing conditions in the Northeast.

The financial side has been the most difficult. “I put every penny of my retirement into the business. Sullivan County is not the richest, but its Economic Development department offers low-interest loans. They have really helped me.”

For labor, he’s been lucky. Friends help him with harvest and winemaking. Part-time employees help in the tasting room and he works seven days a week most of the year.

So far, Paul only sells his wine and beer in the tasting room. He has no distributor. Unlike many wine geeks, Paul is not a wine snob. He is a social critter and his outgoing personality pervades the winery. The tasting room is packed on weekends with locals and tourists from Manhattan. He’s the genial host of a casual get together where people can spend a pleasant afternoon. But this was not in his original plans.

“I just wanted to have a storefront and bottles for sale and tastings—the place morphed on its own. I had no intention of serving people glasses of wine, having pizza and live music. I am blessed to have a lot of friends who want to help out. We have a community. I always have a harvest party, put something on the slow cooker, have a lot of helpers when I need them, such as when we bottle wine. Now we have a lot of regulars. We don’t advertise; it’s all word of mouth. The word has spread, we get a crowd from all walks of life. We are warm and kid-friendly; a lot of horseback riders stop by.”

A friend helped him build the brick pizza oven. “I was the laborer, he did all the concrete work.” This year he plans to expand the food service. “We are going to start having gourmet food trucks; one girl lives on a farm—it’s going to be all farm-to-table food. I want the food to be really healthy.”

He’s also been making two barrels of beer  a  week, which sells out each weekend. Currently, he is producing 4,000 gallons of wine, or 1500 cases a year, from his grapes and from those he buys from sustainable growers in New York. “I am looking to expand if I can get financing, but don’t want to grow too big and lose the craftsmanship. We do everything by hand—hand sort, hand pick and crush. I want to expand the brewing operation into another building so I can put in more fermenters and have a custom-built barrel brewing system. I want to age more beer in wine barrels. I don’t want to get too big. As long as I can pay myself and do some hunting and fishing, I am happy.” To learn more, visit bashakillvineyards.com.

Interested in making your own wine, or brewing your own beer at home? Get a free catalog of supplies and ingredients from: E.C. Kraus, Box 7850-NP, Independence, MO 64054, www.ECKraus.com/offers/np.asp 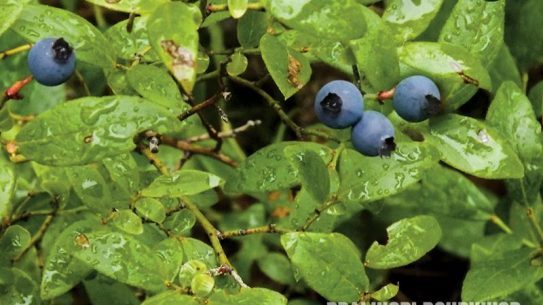 How to make the nutritious, backpack-friendly snack that’s always ready to roll!