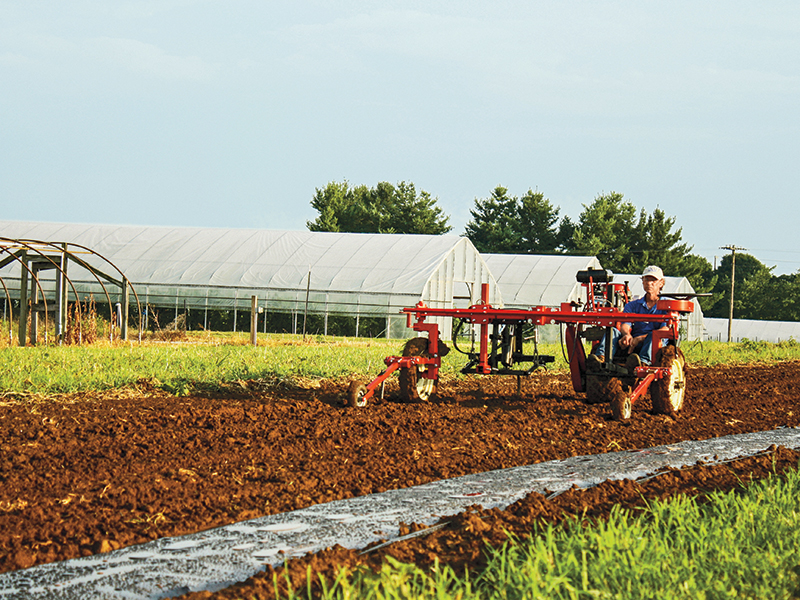 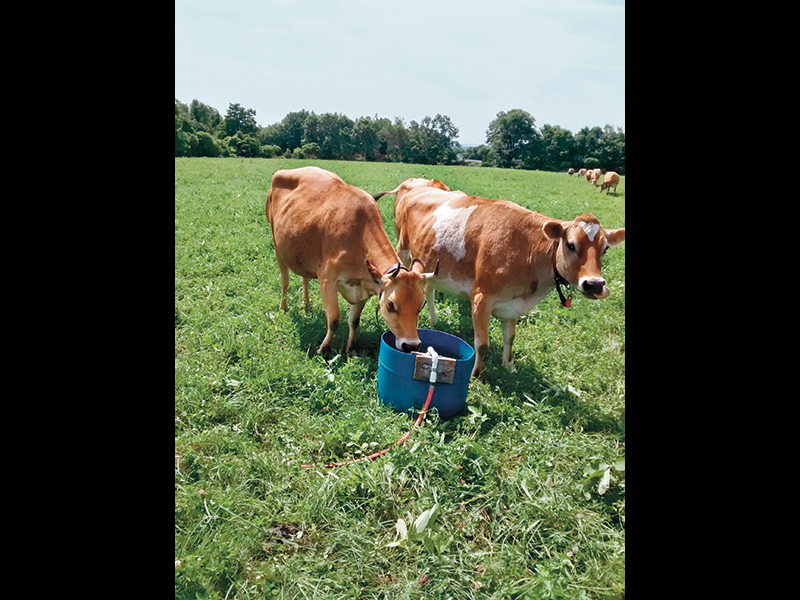 2 of 7
Photo by FarmHack.org
Farm Hack Masters: Innovative Homestead Tools
This is an easy-to-move, low-cost watering system that reduces the problems associated with fixed watering locations. 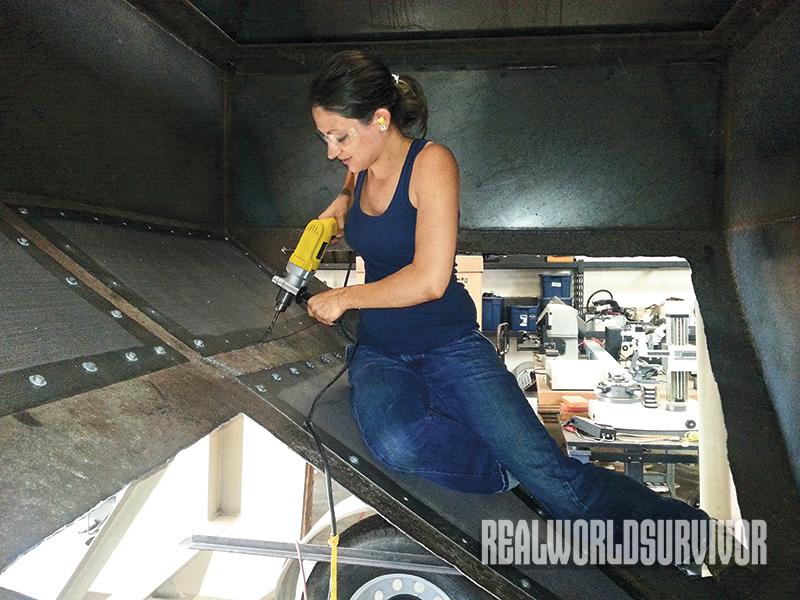 3 of 7
Photo by Jereme Zimmerman
Farm Hack Masters: Innovative Homestead Tools
Abby Adams bolts the newly cut panels into the grain bin’s flooring. The team chose to bolt rather than weld the panels to the frame should they need to be replaced. The photovoltaic panels are covered by a tarp when not in use to prevent the system from continually running. 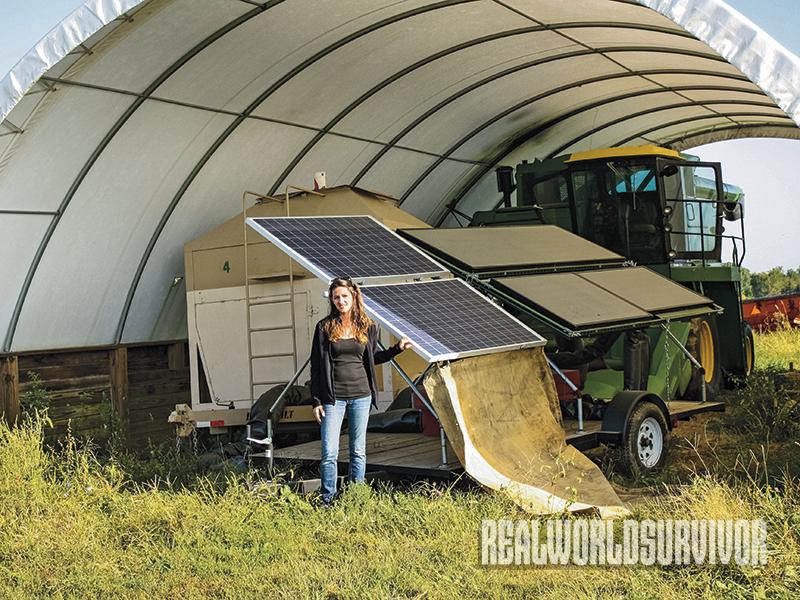 4 of 7
Photo by Jereme Zimmerman
Farm Hack Masters: Innovative Homestead Tools
Abby and the solar-powered grain-drying system she helped design and build for the Berea College Organic Farm. The solar hot air collector panels pull in hot air that is transferred via a fan through ducting into the grain bin in the background. 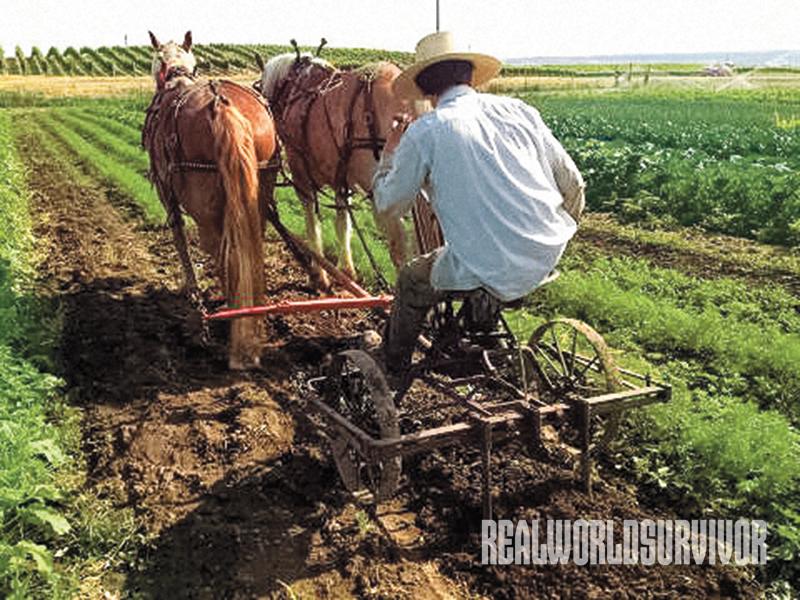 5 of 7
Photo by Jereme Zimmerman
Farm Hack Masters: Innovative Homestead Tools
This two-horse implement is designed to lift up row crops—carrots, green garlic and garlic—for harvest, as well as brassica (cole crops) plants after their harvest is over. 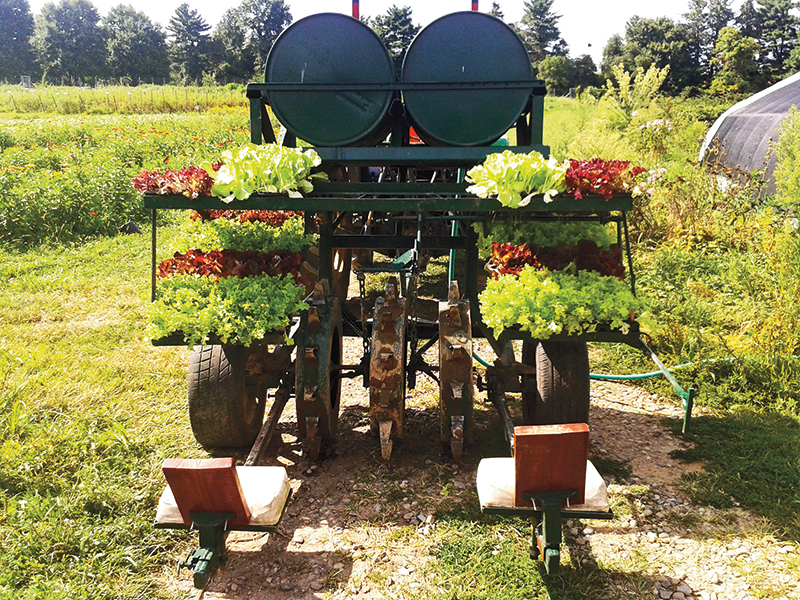 6 of 7
Photo by FarmHack.org
Farm Hack Masters: Innovative Homestead Tools
A transplanter made from an old water wheel plants seedlings quickly with a minimum of labor. 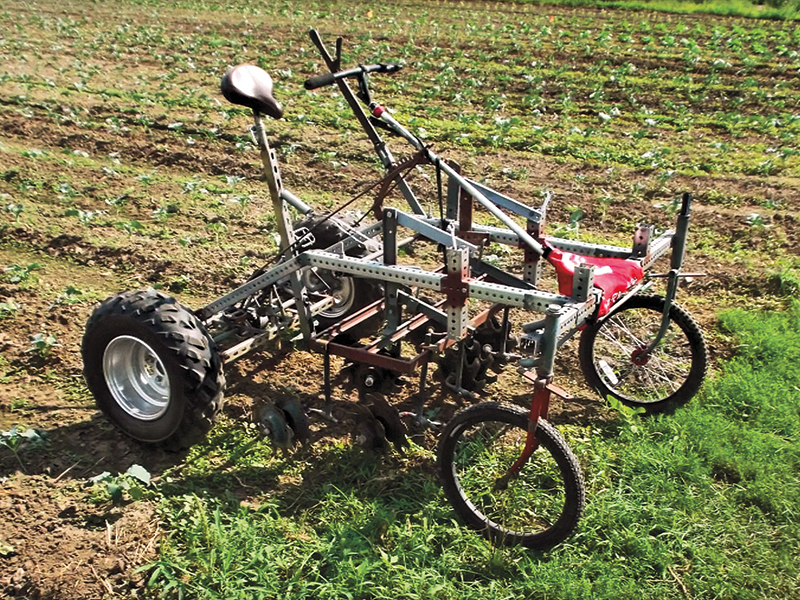 7 of 7
Photo by FarmHack.org
Farm Hack Masters: Innovative Homestead Tools
A pedal powered tractor for cultivation and seeding, built from readily available lawn tractor, ATV and bicycle parts. It is easier on the driver, cheaper than a tractor, easily adaptable, uses no fuel and causes less soil compaction. 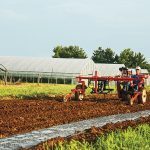 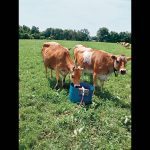 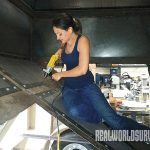 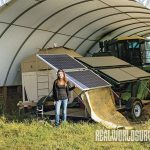 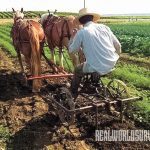 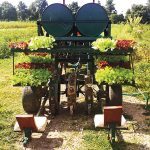 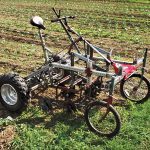 As anyone who has followed food and farming over the past couple of decades knows, the face of agriculture isn’t what it used to be. I grew up on a northern Kentucky homestead and farm, but spent many years away from agricultural life upon moving away after high school. It was always on my periphery, from the corn fields and vineyards I bicycled through while touring Europe, to the smell of manure as I drove or bicycled through “cow country” in rural Whatcom County in the far northwestern corner of Washington state, but it took me more than a decade to reconnect with the farming life.

While maintaining an urban homestead in Berea, Kentucky, I frequent farmers markets, help my parents with work on their thriving goat farm, and trade and barter farm and garden goods in an effort to return to my roots. In doing so, I have discovered that farming grew up while I was away. Not that it hasn’t always been a noble way of life frequented by mature, thoughtful, well-rounded individuals, but today’s farmers rarely fit the stereotypes of yore. They span generations, they are connected with the latest trends in technology and social media, and they’re eager to innovate. This could almost be said of farmers of 50 or more years ago, but the rise of Big Ag and the mass migration of farmers to urban areas during the industrial expansion of the early 20th century resulted in an aging populace of small- to mid-scale farmers who were struggling to stay above water.

Fortunately, folks like my parents who were part of the “back to the land” movement of the 1970s moved in droves to rural areas and worked to bring the land back to life. In doing so, they spawned my generation. Raised in an era of television, computers, video games and a pop culture that was difficult to hide from, many of us learned to embrace both technology and farm life at a young age.

With the rise of technology came the mass industrialization of farming and a shift toward agricultural equipment that was more suited to large-scale factory farms than to small farms. While there are still plenty of old-school tools available that have stood the test of time, there is something to be said for the efficiency and convenience of mechanized equipment. Many small farmers simply adapt large-scale equipment for their needs or come up with creative fusions of old and new tools. Still, there is a disconnect between the creators of these customized tools and the larger community that could benefit from the work of its peers.

Enter Farm Hack. Dorn Cox, a former open-source software developer, is the executive director of GreenStart, a New Hampshire educational non-profit organization committed to sustainable agricultural practices and soil health. Through GreenStart, Cox discovered the fledgling Farm Hack movement while pursuing his idea for developing an open-source farm-tool repository. Farm Hack is a group of farmers and technologists who collaborate online (at farmhack.org) and through regional Farm Hack events to share ideas, pass along blueprints and demo equipment.

The first official Farm Hack event was hosted by GreenStart and the Massachusetts Institute of Technology (MIT) in 2011. Attended by a disparate group of farming and technology professionals from across the spectrum, it was a meeting of minds with a common goal: to remove the boundaries limiting the free exchange of knowledge in order to hasten modern agriculture’s much-needed facelift. Since then, several events have been hosted by universities, non-profits and farms.

Universities and colleges are also realizing the need for new, innovative farming equipment based on old ideas. In particular, colleges with organic farming programs are finding that most conventional farming equipment just doesn’t make the cut when striving to educate students about sustainable, holistic approaches to farming.

The University of Kentucky’s Department of Biosystems and Agricultural Engineering’s (BAE) Specialty Crops Mechanization program has an ongoing commitment to designing specialized equipment for market growers. Currently, students and faculty are busy modifying a furrow-guidance machine for organic vegetable production based on designs that were initially developed for tobacco and strawberry harvesting. When I met with Associate Extension Professor John Wilhoit, he demonstrated the machine’s flexibility and customizability. It can be used for everything from furrowing to planting, to weeding, to harvesting with just a few quick adjustments.

The machine is self-guided due to a sprocket-and-chain steering system, and can thus be operated by a single person. It can also be outfitted easily with multiple attachments and has an adjustable width, allowing it to be used for both field crops and raised beds. Currently, students and staff are working out some kinks and determining its viability for public use, but plan on posting the plans online once they are ready.

Matt Wilson, the former organic farming coordinator of Berea College in Berea, Kentucky, showed me a portable, solar-powered grain dryer that was designed to provide the college’s organic farm with a solution to a problem people were having harvesting grain in a manner that fit in with their sustainable approach to farming.

Traditionally, the grains are left to dry in the field on the stalk. However, on an organic farm, a fall cover crop is needed to hinder the potential for soil degradation from topsoil runoff and other problems, and to provide much-needed nitrogen for the next year’s crops. Allowing the grain to dry fully on the stalk doesn’t provide adequate time for a cover crop to be planted before winter weather hinders growth.

Wilson decided to work with Dr. Gary Mahoney, professor of technology and applied design, to formulate a solution. After several trips to the drawing board, they came up with a concept for a low-temperature grain dryer powered by photovoltaic and solar hot air collector panels connected to a repurposed, 4-ton feed buggy. Mahoney and Wilson chose Berea College student Abby Adams to design and build it for her internship with the Sustainability and Environmental Studies (SENS) Program.

A Brain For Grains

The project, Adams told me, “could have easily employed the expertise of a mathematician, grain bin engineer, accountant, designer, solar specialist…” The list goes on. Instead, she interviewed individuals from several fields and, after many design iterations, came out with a plan for a functional product that would meet the needs of the farm.

The majority of Adams’ work was in converting the feed buggy. She learned in the process that entire careers are built around designing grain bins due to the complex engineering and mathematical factors involved. Fortunately, Grain Management Engineer Dr. Sam McNeill of the University of Kentucky’s Biosystems and Agricultural Engineering department was willing to crunch the numbers for her.

The goal was to design a bin that would hold about 154 bushels, and provide the proper amount of airflow at the appropriate rate of static pressure. Due to the asymmetrical shape (as opposed to a standard bin with a flat bottom) of the converted feed buggy, they rounded the numbers up and determined that they needed a fan that could withstand 500 cubic feet per minute (CFM) at three-quarters of an inch of static pressure.

Adams accomplished a daunting task, performing the work of many professionals and still turning out a functional, innovative product. “Without the willingness to help, knowledge and expertise of those individuals, this project would surely have had a very different final product, and we would never have known if it would have been successful at fulfilling its purpose,” she told me.

Since constructing the grain bin took up her entire internship, the staff of the Berea College Organic Farm assembled the solar furnace and fan on the trailer, which was then connected to the grain bin via ducting attached to a hole cut in the grain bin door. While Adams feels this is an appropriate technology that could be shared and adapted for many uses vis-à-vis the Farm Hack ethos, there are currently no blueprints due to the “on the fly” nature of the project.

The work of Adams, Wilhoit, Cox and the Farm Hack community is evidence that small-scale, organic farming can thrive and even be competitive in the larger market if people are willing to work together and share ideas. After all, as Thomas Jefferson once said, “He who receives an idea from me, receives instruction himself without lessening mine; as he who lights his taper [candle] at mine, receives light without darkening me.”

To share your ideas for a potential event with the Farm Hack community or information about hosting an event, visit farmhack.org.

To learn about some of the plans developed at the University of Kentucky’s Department of Biosystems and Agricultural Engineering Specialty Crops Mechanization plans for a low-cost cold storage room for market growers and an offset bale unroller, visit uky.edu/bae.

If Abby Adams’ grain dryer sounds like something you would like to tackle, you can find formulas in the publication Fan Sizing and Application for Bin Drying/Cooling of Grain by Bruce A. McKenzie and George H. Foster of the Cooperative Extension Service of Purdue University. For information about the build contact the Berea College Farm at 859-985-3591 or sean_clark@berea.edu. 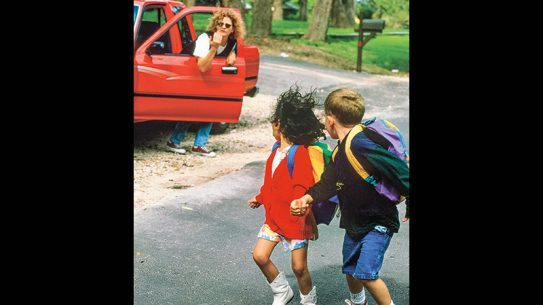 Keep your children safe by preparing them to react in crisis situations.