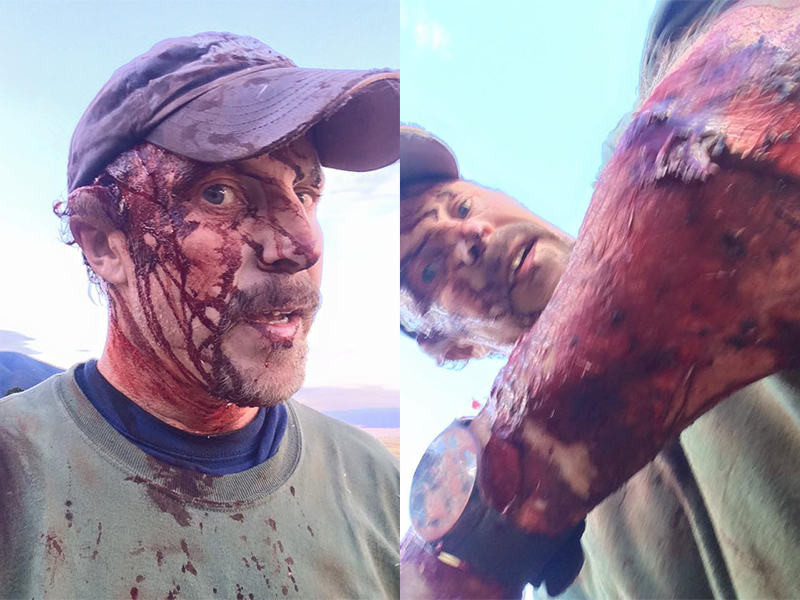 Photo by Todd Orr/Facebook
Photos Todd Orr took of himself immediately after the attack.
Comment(s) 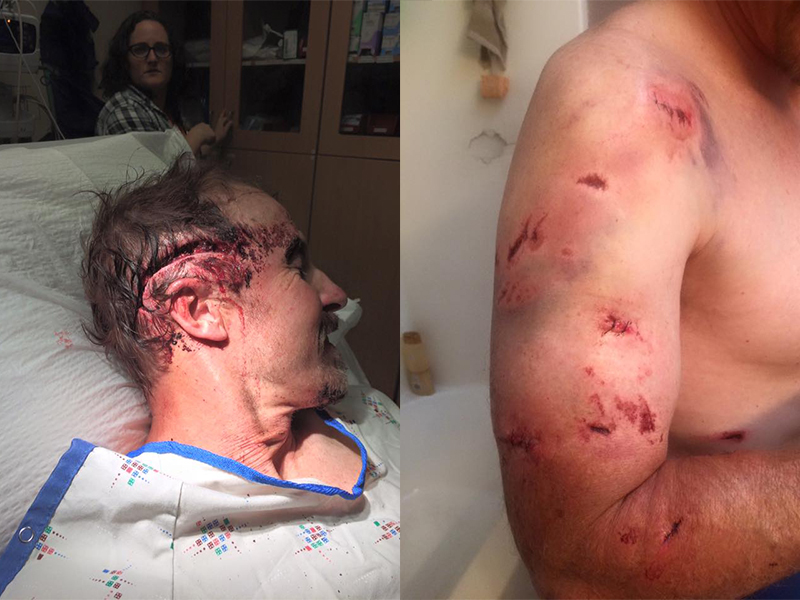 2 of 2
Photo by Todd Orr/Facebook
Hiker Todd Orr Survives Absolutely Insane Grizzly Attack, Takes Video
Photos of Todd Orr in and out of the hospital. 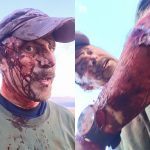 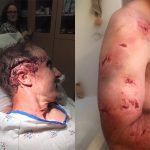 If you haven’t heard the name Todd Orr, you might want to Google it.

Orr was hiking in Madison Valley, Mont., Sunday, when he spotted a grizzly on the trail. The ensuing attack was both brutal and intense, but Orr managed to survive and immediately snapped a video of himself after (scroll all the way to the bottom of this page to see the video).

If that wasn’t enough, he drove himself to the hospital.

Here is the attack in Orr’s own words on Facebook:

“I took an early morning hike in the Madison Valley to scout for elk. Knowing that bears are common throughout southwest Montana, I hollered out “hey bear” about every 30 seconds so as to not surprise any bears along the trail.

“About three miles in, I stepped out into an open meadow and hollered again. A few more steps and I spotted a sow Grizzly bear with cubs on the trail at the upper end of the meadow. The sow saw me right away and they ran a short distance up the trail. But suddenly she turned and charged straight my way. I yelled a number of times so she knew I was human and would hopefully turn back. No such luck. Within a couple seconds, she was nearly on me. I gave her a full charge of bear spray at about 25 feet. Her momentum carried her right through the orange mist and on me.

“I went to my face in the dirt and wrapped my arms around the back of my neck for protection. She was on top of me biting my arms, shoulders and backpack. The force of each bite was like a sledge hammer with teeth. She would stop for a few seconds and then bite again. Over and over. After a couple minutes, but what seemed an eternity, she disappeared.

“Stunned, I carefully picked myself up. I was alive and able to walk so I headed back down the trail towards the truck 3 miles below. As I half hiked and jogged down the trail, I glanced at my injuries. I had numerous bleeding puncture wounds on my arms and shoulder but I knew I would survive and thanked god for getting me through this. I hoped the bleeding wasn’t too significant. I really didn’t want to stop to dress the wounds. I wanted to keep moving and put distance between us.

“About five or ten minutes down the trail, I heard a sound and turned to find the Griz bearing down at 30 feet. She either followed me back down the trail or cut through the trees and randomly came out on the trail right behind me. Whatever the case, she was instantly on me again. I couldn’t believe this was happening a second time! Why me? I was so lucky the first attack, but now I questioned if I would survive the second.

“Again I protected the back of my neck with my arms, and kept tight against the ground to protect my face and eyes. She slammed down on top of me and bit my shoulder and arms again. One bite on my forearm went through to the bone and I heard a crunch. My hand instantly went numb and wrist and fingers were limp and unusable. The sudden pain made me flinch and gasp for breath. The sound triggered a frenzy of bites to my shoulder and upper back. I knew I couldn’t move or make a sound again so I huddled motionless. Another couple bites to my head and a gash opened above my ear, nearly scalping me. The blood gushed over my face and into my eyes. I didn’t move. I thought this was the end. She would eventually hit an artery in my neck and I would bleed out in the trail… But I knew that moving would trigger more bites so a laid motionless hoping it would end.

“She suddenly stopped and just stood on top of me. I will never forgot that brief moment. Dead silence except for the sound of her heavy breathing and sniffing. I could feel and her breath on the back of my neck, just inches away. I could feel her front claws digging into my lower back below my backpack where she stood. I could smell the terrible pungent odor she emitted. For thirty seconds she stood there crushing me. My chest was smashed into the ground and forehead in the dirt. When would the next onslaught of biting began. I didn’t move.
And then she was gone.

“I tried to peek out without moving but my eyes were full of blood and I couldn’t see. I thought that if she came back a third time I would be dead, so I had to do something. Staying in position on the ground, I slowly reached under my chest to grab at the pistol I was unable to get to earlier. I felt I needed something to save my life. The pistol wasn’t there. I groped around again but nothing. I wiped the blood from one eye and looked around.
No bear.

“The pistol and holster were lying five feet to my left. The bear’s ferocious bites and pulling had ripped the straps from the pack and the holster attached to it. Now trashed, that backpack may have helped prevent many more serious bites on my back and spine.

“I picked everything up and moved down the trail again. I couldn’t believe I had survived two attacks. Double lucky!

“Blood was still dripping off my head and both elbows and my shirt was soaked to the waist and into my pants. But a quick assessment told me I could make it another 45 minutes to the truck without losing too much blood. I continued the jog just wanting to put more distance between that sow and I.

“At the trailhead was one other vehicle. I really hoped that person didn’t run into the same bear.

“I snapped a couple quick photos and a video of my wounds, laid some jackets over the truck seat and headed for town. I stopped a rancher along the way and asked him to make a call to the hospital. When I got into cell service, I made a quick call to my girlfriend to ask how her morning was going, before freaking her out and asking her to bring me a change of clean clothes to the hospital.

“Another call to 911 and I gave the operator a quick run down of my injuries and asked her to call the hospital and give them a heads up that I was ten minutes out.
Moments later I was met at the front door by the doctor, nurse and an officer. I had to ask the officer to open the door, put my truck in park, and unbuckle my seat belt. My left arm was useless. He was impressed I had taken the effort to buckle.

“Once inside, the x-rays revealed only a chip out of the ulna bone in my forearm. Following was eight hours of stitching to put me back together. Most were arm and shoulder punctures and tears. A 5” gash along the side of my head will leave a nasty scar, but I’m hoping my balding doesn’t come on too quickly and leave that one exposed.

“And finally, this morning, numerous deep bruises and scrapes are showing up from the bites that didn’t quite break the skin. Dark bruising in the shape of claws, line across my lower back and butt where the bear stood on me. Also a few more chest bruises and facial abrasions from being smashed and slammed into the ground.

“Not my best day, but I’m alive. So thankful I’m here to share with all of you. In a couple weeks I will have to clean out the truck a little better. My girlfriend says it looks like I had gutted an elk in the drivers seat.” 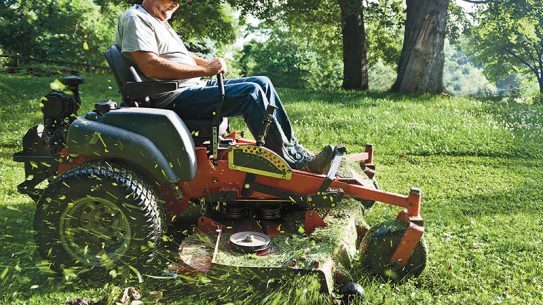 Choosing the Best Mower to Mow Around Tight Spots

If you're looking to spice up your garden, use this complete guide to help...