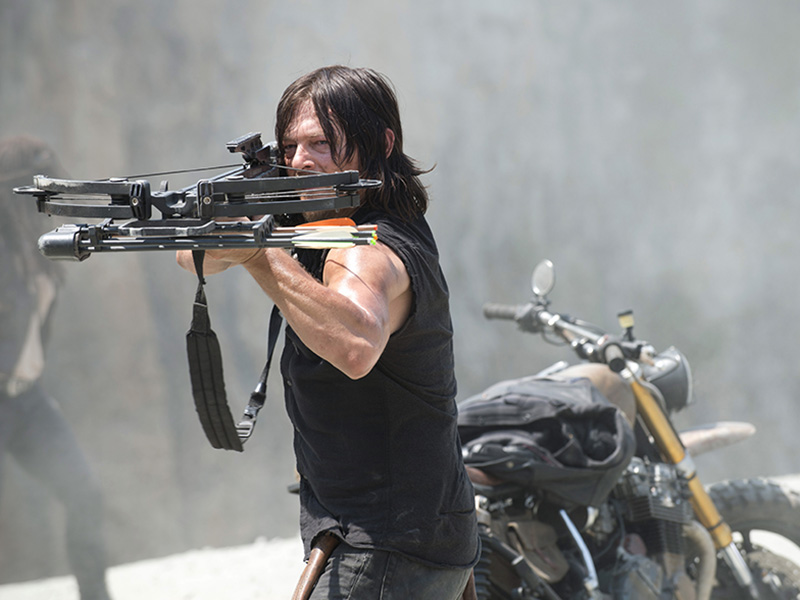 1 of 10
Photo by Gene Page/AMC
Carbon Express X-Force 350 Crossbow
“For the same reason that Daryl Dixon gravitates toward a crossbow as the ideal weapon with which to dispatch the undead, normal people out here in the real world may find one useful as well.” 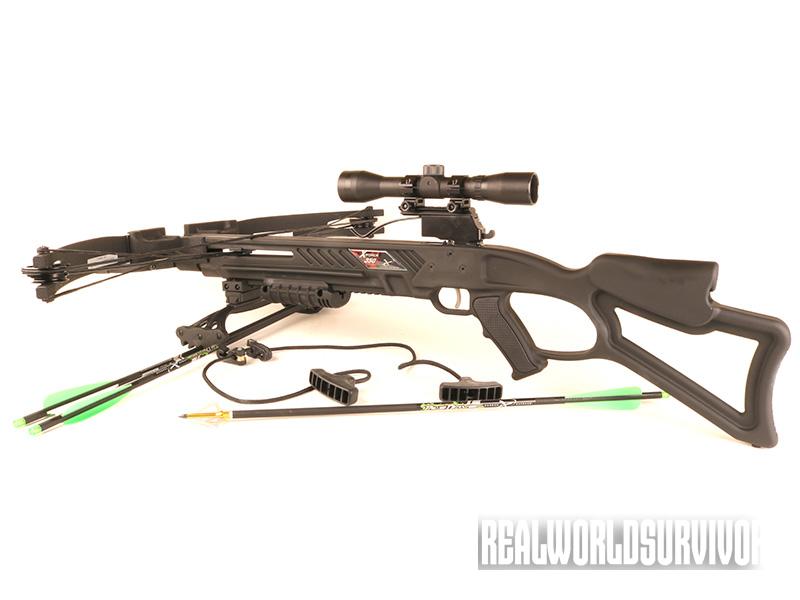 2 of 10
Carbon Express X-Force 350 Crossbow
In many locales a crossbow may be ordered freely through the mail and remains suitable for big-game hunting and survival applications. 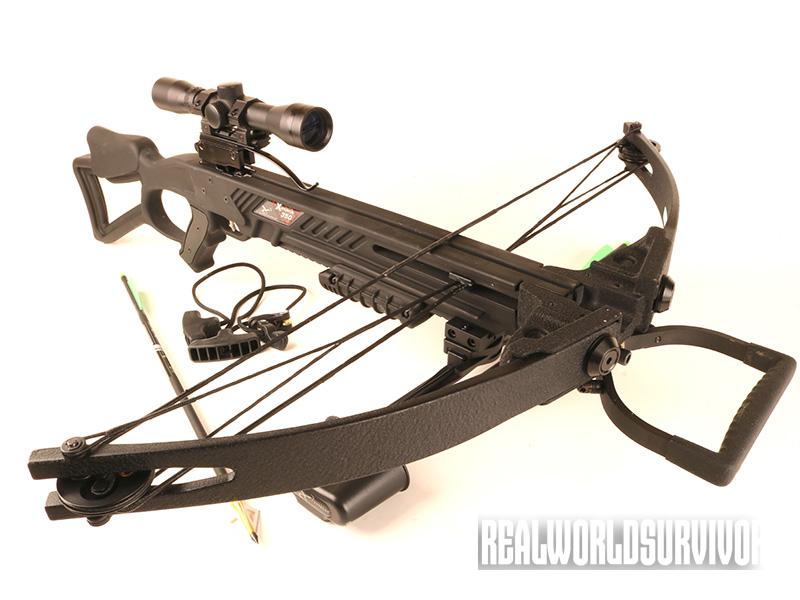 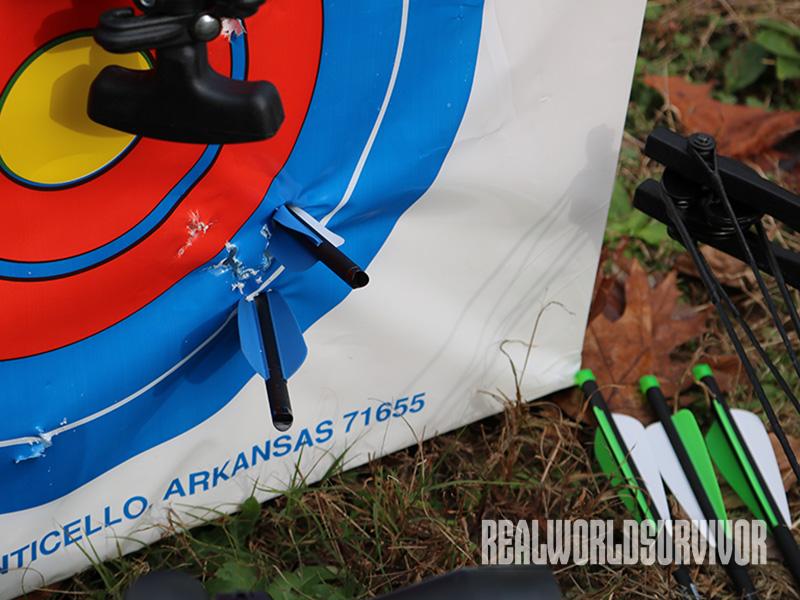 4 of 10
Carbon Express X-Force 350 Crossbow
A three-shot group at about 25 meters. One of the three bolts buried itself fully within a standard archery target. 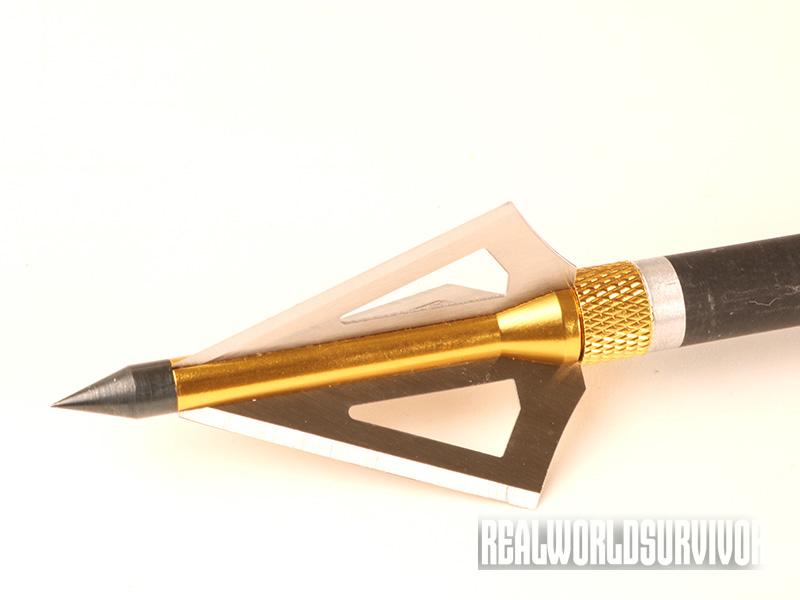 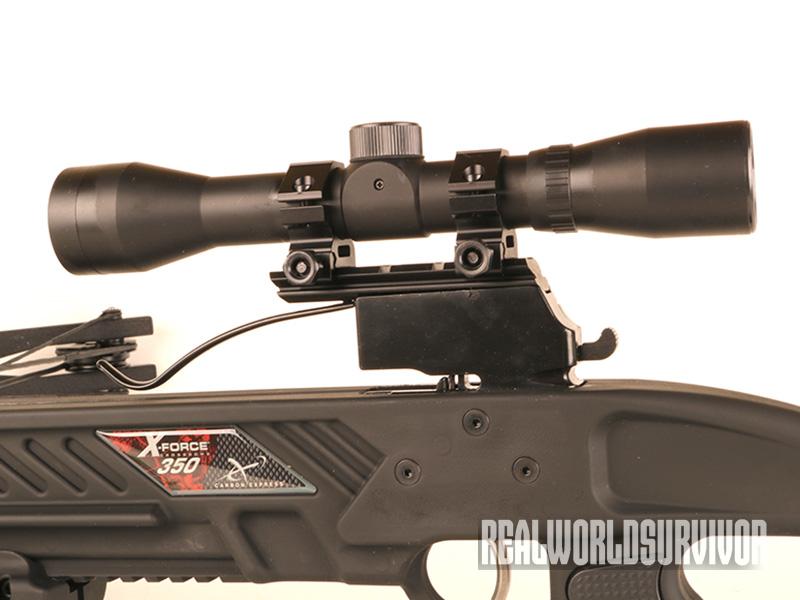 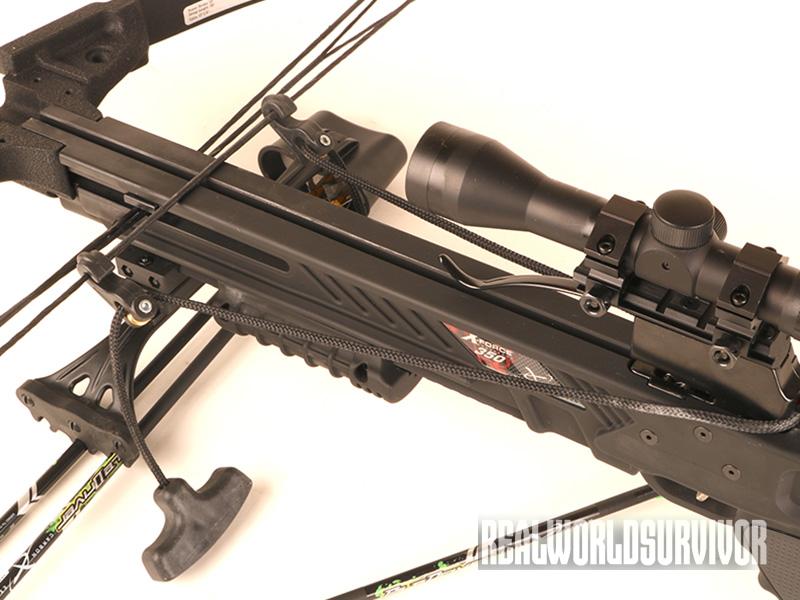 7 of 10
Carbon Express X-Force 350 Crossbow
The simple cocking device is the very image of mechanical elegance and simplicity. 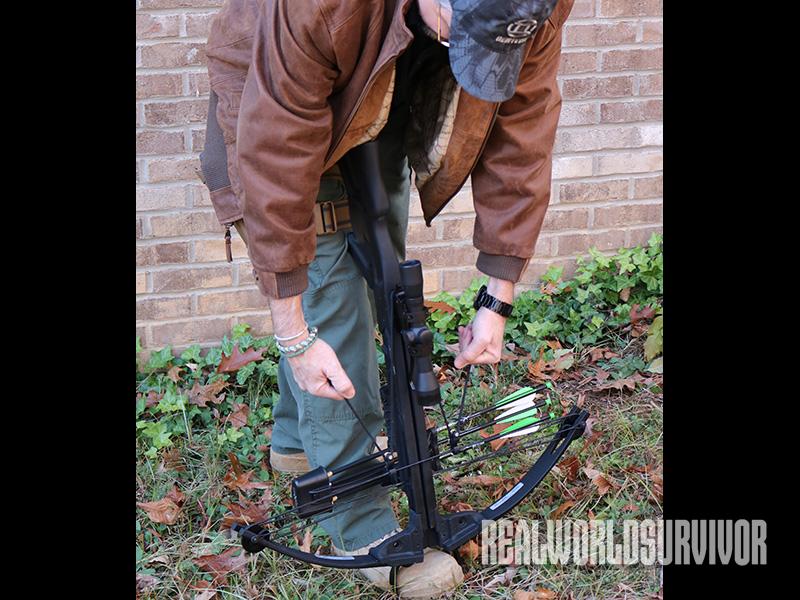 8 of 10
Carbon Express X-Force 350 Crossbow
The cocking sequence is straightforward and within the capability of any able-bodied operator. 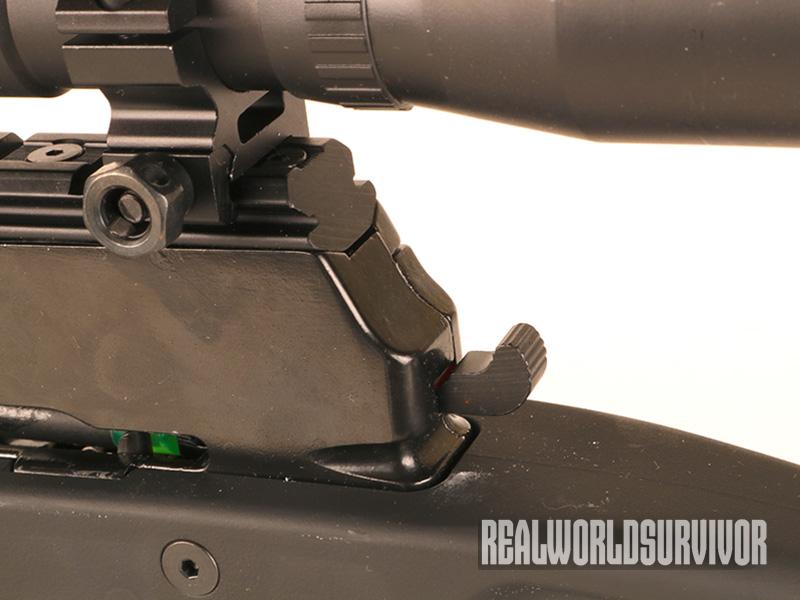 9 of 10
Carbon Express X-Force 350 Crossbow
A solid safety mechanism automatically resets after every shot is made. 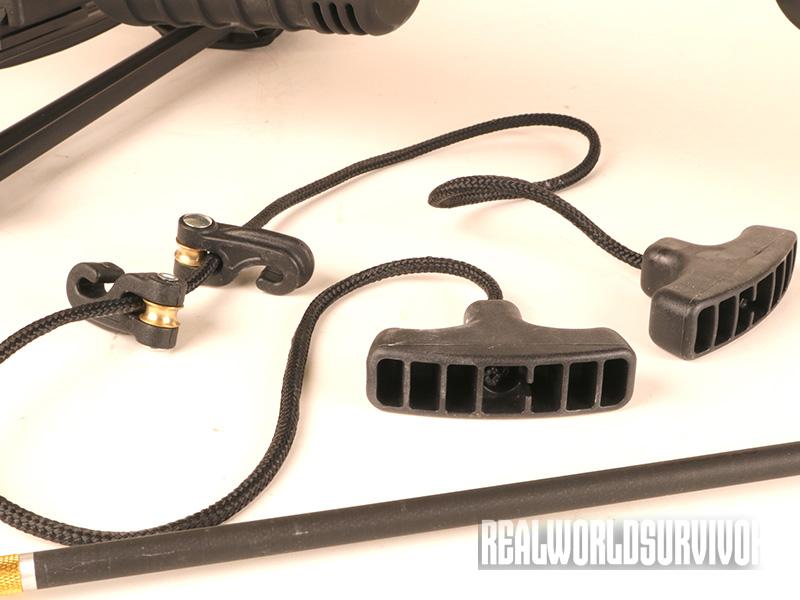 10 of 10
Carbon Express X-Force 350 Crossbow
The 165-pound draw weight is made manageable by the 350’s remarkably clever cocking tool. 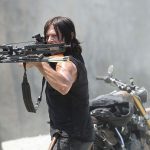 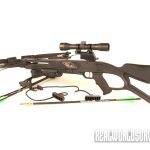 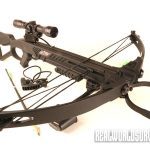 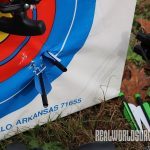 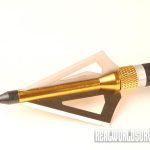 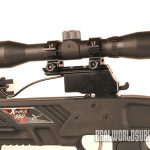 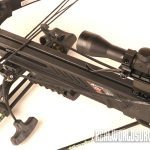 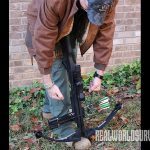 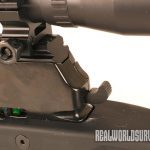 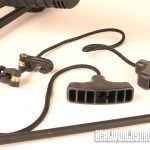 This deep into the plague, Daryl could smell them. The odor of the walkers was a penetrating, repugnant sort of thing that carried for a remarkable distance. The smell was frequently the first indicator that the undead were nearby and hungry. He had not had a shower in as long as he could remember and likely smelled fairly frightful himself. That brought a grim grin as he raised his crossbow to his shoulder and used the edge of the prod to press the door to the ramshackle cabin open slowly.

The zombie rushed out clawing and screaming as they did. It was a male and had been in its mid-thirties when it changed. That meant it was fast and strong. It was also mostly intact. That meant it had been feeding regularly. Daryl pivoted slightly and sighted quickly over the bow’s open sights. He stroked the trigger and the powerful bolt center punched the thing in its forehead, dropping it like a sack of cement. Daryl retrieved his bolt and quickly recocked his crossbow. Walkers seldom hunted alone.

Daryl Dixon is most everybody’s favorite character on “The Walking Dead.” Strong, loyal, capable, and sporting superb fieldcraft borne of a hardscrabble upbringing, his crossbow is an optimized tool for dispatching undead walkers without making much noise. Powerful, accurate, quiet, and reusable, the crossbow brings some remarkable capabilities to the table despite having been introduced by the Chinese some 2,600 years ago. For the same reason that Daryl Dixon gravitates toward a crossbow as the ideal weapon with which to dispatch the undead, normal people out here in the real world may find one useful as well. The attributes that make this weapon such a formidable counter-zombie tool translate readily to survival usage. I bought mine for around $300 on Amazon and have been amazed at its effectiveness.

I opted for a Carbon Express X-Force 350 compound crossbow along with a dozen spare bolts, a similar number of razor-sharp broadheads, and a broadhead wrench. There are literally dozens of options, but this particular bow got solid reviews and was reasonably priced. The X-Force 350 comes with a foot cocking stirrup, a 4×32 optical sight, and a cocking cord. There is a whole new world of technical stuff to learn that orbits around the art of running and maintaining a crossbow. For starters, a proper modern crossbow must be lubricated with some waxy lube that looks like lip balm every five rounds or so. This keeps the bowstring and sliding bits moving freely. Three tubes of the stuff set me back about $5 and will last a lifetime.

My X-Force 350 sports a draw weight of 165 pounds. This pushes a carbon fiber bolt to between 275 and 300 feet per second according to my trusty Caldwell chronograph. While 165 pounds may seem intimidating, modern crossbows take advantage of some of the most remarkable physical laws to make this number more manageable.

If you think back to seventh grade science class, there are basically three simple machines—the inclined plane, the wedge, and the lever. However, these three basic contrivances can be radically applied to produce the aforementioned eccentric pulleys, as well as the brilliant cocking tool that allows a normal person to cock such a powerful weapon as the X-Force 350. The X-Force 350 simply maximizes its mechanical advantage.

The cocking tool that comes with the X-Force 350 is a length of heavy nylon rope with a pair of sliding hooks in the middle and substantial handles on each end. To utilize the device you lay the center of the cord over a rigid fulcrum on the back of the crossbow tiller (the classic term used to describe the frame or body of the weapon). You then affix the two polymer hooks to the bowstring and secure the bow muzzle down by slipping your foot through the handy stirrup on the far end of the tiller. Now by pulling back on the two handles the rope enables compound leverage to be applied to retract the string and cock the bow. The entire process is not particularly laborious, and the cocking rope will ride comfortably in your pocket.

Moving with a purpose I can get my crossbow back in action after a shot in maybe twenty seconds. Others might be faster, but this still offers a sustained rate of fire of three rounds per minute. Additionally, as Darryl Dixon can attest the ammo is fully reusable. The safety resets itself with each shot. There is a healthy groove that runs the length of the tiller to keep the bolt positioned for firing. A piece of spring steel holds the bolt in place against vigorous movement.

The Carbon Express X-Force 350 crossbow is surprisingly quiet in action. With everything appropriately lubricated this weapon fires with less audible sound than even the most expensive sound suppressed firearms. This crossbow carries enormous downrange energy as well. I have a heavy Styrofoam archery target of the sort that I have used for years to practice with my more conventional bows. The X-Force 350 will push a bolt all the way through the thing. The only downside is that such vigorous performance can eventually damage the fletching on the bolts. The trigger is heavy and thick but entirely adequate.

I have owned a decent compound bow for decades and have shot most every sort of firearm there is for both fun and money. The X-Force 350, however, added a refreshing new facet to my experience at half the price of a new pistol. While the chances are small that I might actually encounter a real zombie intent on masticating on my grey matter, I do indeed have the proper tool should the need arise.

A modern crossbow ships through the mail without any ancillary government paperwork. It also hits like a .50 caliber at modest ranges. Such a tool would easily drop white tail deer or feral pigs. Additionally, rare is the hooligan who might press home an attack when confronted by a determined survivor sporting a crossbow. Spare bolts are cheap. Threading a field point off in favor of a vicious-looking broadhead also takes less time to do than to describe. I would suggest you invest in a cheap plastic broadhead wrench to assist with this task. I have sewed some fearsome broadhead injuries.

The modern crossbow is an effective survival tool that offers certain capabilities not found in conventional firearms. A crossbow of your own is but a click away. Accessories are dirt cheap when compared to those available for conventional firearms. If you still have a little space left over in your bugout vehicle after your food, medical gear, and shelter, you might want to think about adding a crossbow.

This article was originally published in “Survivor’s Edge” Fall 2017. To order a copy, visit outdoorgroupstore.com. 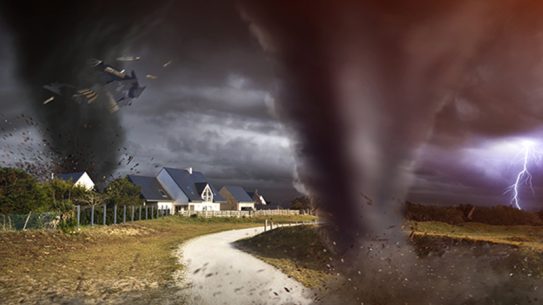 Your Complete Guide to Building a Safe House for Disaster Survival