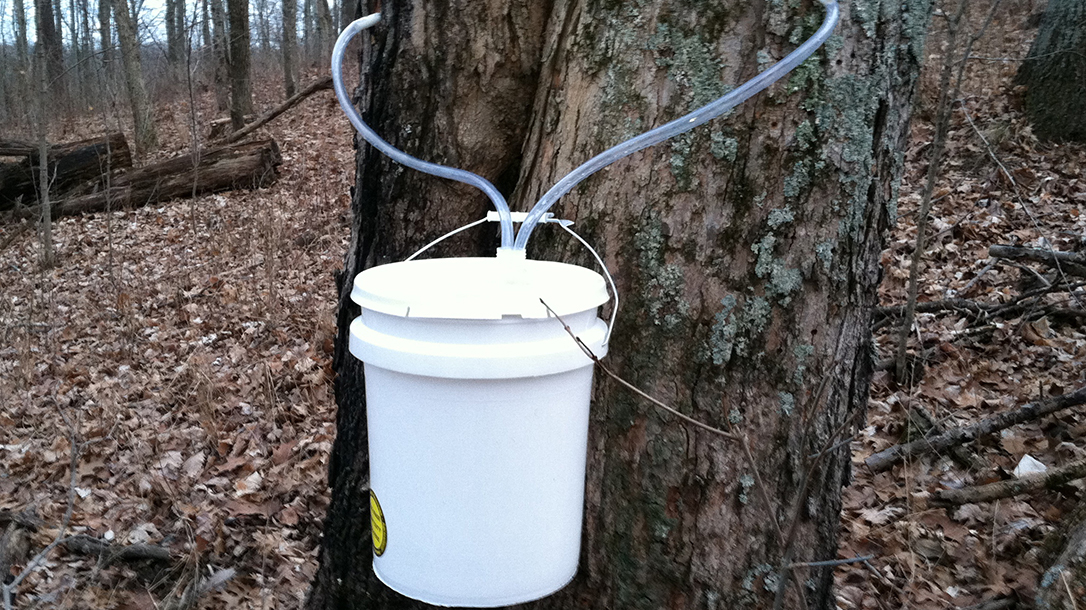 1 of 5
Photo by Dan Adams
DIY Maple Syrup
Hang a bucket to collect the sap from a hooking hanging from the spile, or insert food-grade plastic tubing into the tree so that it will drip sap into the food-grade bucket (shown). 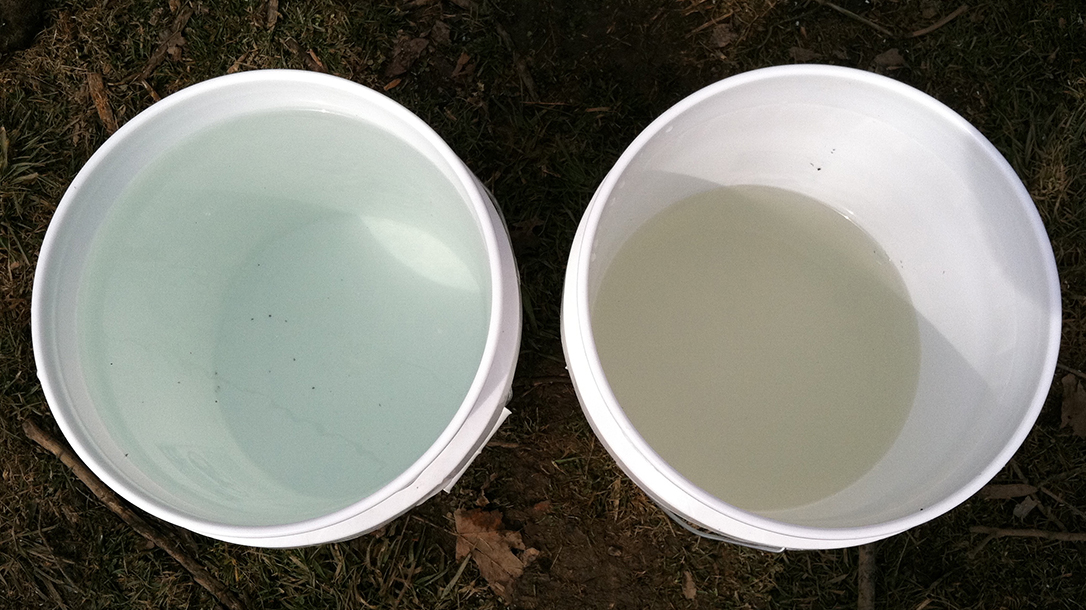 2 of 5
Photo by Dan Adams
DIY Maple Syrup
Check the buckets periodically (particularly after an increase in temperature). The bucket on the left is the way the sap should look. In the bucket on the right, the sap is cloudy, an indication that it shouldn’t be used. 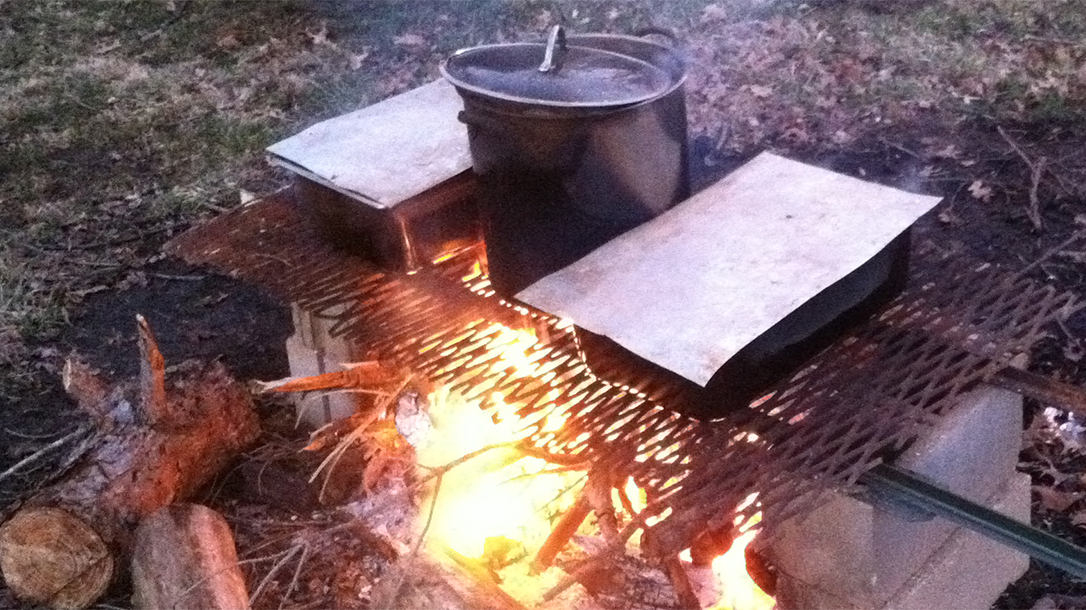 3 of 5
Photo by Dan Adams
DIY Maple Syrup
For a small operation, boil the sap into syrup outdoors and bring it indoors to finish. 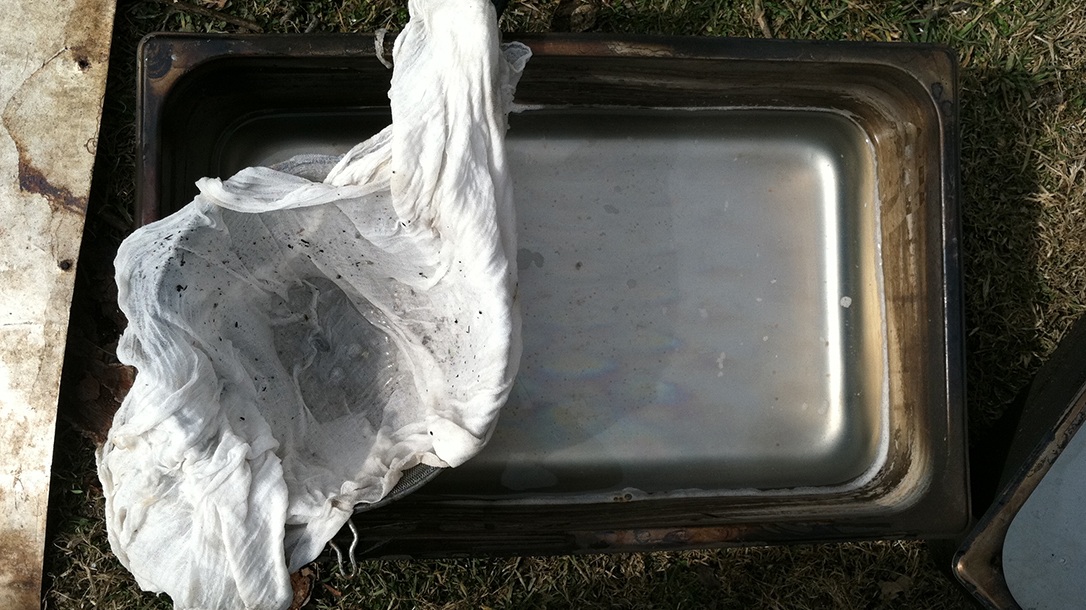 4 of 5
Photo by Dan Adams
DIY Maple Syrup
Cheesecloth comes in handy for filtering the sap before boiling it. 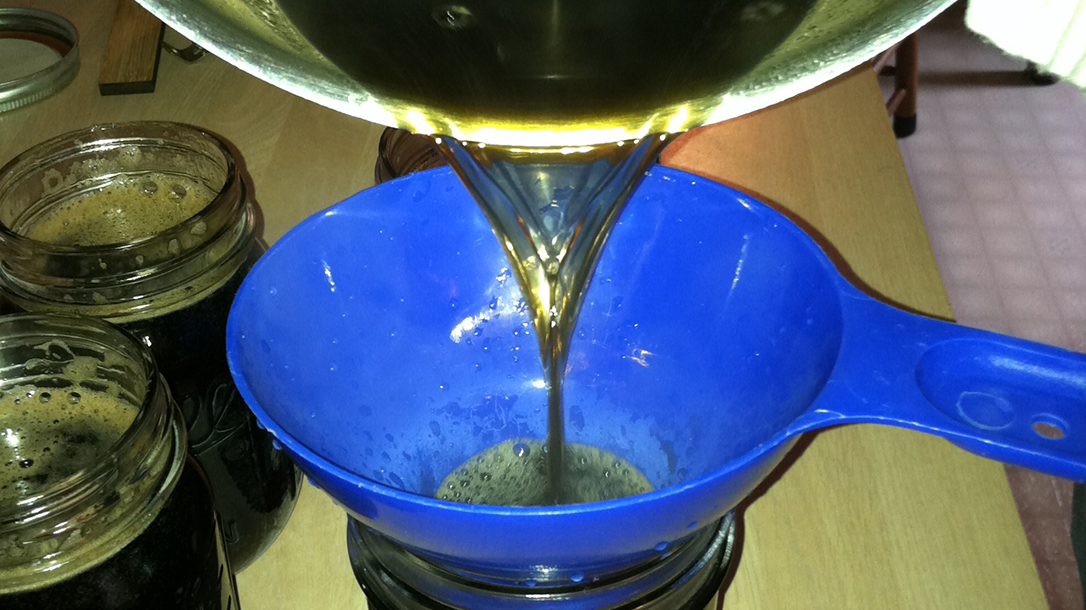 5 of 5
Photo by Dan Adams
DIY Maple Syrup
Process syrup in jars for long-term storage in a boiling water bath. 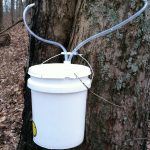 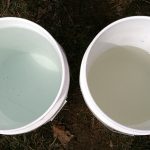 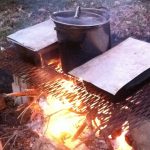 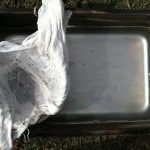 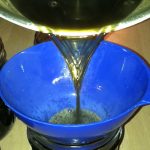 Invariably, the first response I receive when I mention that we make our own maple syrup is, “You can make maple syrup in Kentucky?”

When most people think of maple syrup production, they envision a Vermont family farm, snow blanketing the ground, and vast forests of maple trees with steel buckets hanging from them. They also think of all the equipment normally associated with maple syrup production (evaporators, a holding tank, etc.). However, making maple syrup can be done on a small scale, and is actually very simple. One taste of your own maple syrup (hot off the stove) may be enough to get you hooked.

Prior to winter, maple trees begin storing excess starches. These starches remain in storage while temperatures remain colder than 40 degrees Fahrenheit. Whenever the temperature is above 40, the starches are changed to sugars.

Rising temps create pressure inside the tree, and the sap flows. Before tapping you want a period of hard freeze, followed by several days with temps above 40.

Sugar, silver, and red maples are all considered to be good trees to tap. You could tap box elders as well, but the ratio of sap to syrup yield will be higher (more effort for less syrup). Sugar maple trees are the best. In favorable conditions, you can get in excess of 1 gallon of maple syrup (40 gallons of sap) from a tap. As you’ll see, much of your time will be spent boiling down the sap.

There are some guidelines to follow regarding the number of taps per tree and the distance you place the taps, even from where you placed them the previous year. These guidelines are set mainly to help insure the continued health of the tree.

If your maple tree is at least 10 inches in diameter, you can put in one tap. When it is greater than 20 inches in diameter, you can add a second tap. If it is over 25 inches, you can consider a third tap, but no more than that. It is up to you how many trees you should tap, but I’d keep it to a manageable number, particularly if this is your first time. Where you tap in terms of height doesn’t really matter—just take into account the length of the lines, and put the tap at a height that is comfortable for you.

When you’ve marked the trees that you intend to tap, drill the holes with a 7/16-inch drill bit, and make them a couple of inches deep. When you drill the holes, angle them slightly upwards, so that you let gravity increase the flow. In successive years, you can tap the same tree, but you’ll want to space it off 6 inches, to the left or right, from the previous year’s tap.

Tap the spout in with a hammer. It doesn’t need to be driven in hard (you can damage the tree that way), but just snug enough that it won’t come out. Attach the line to the spout.

When we first decided to try our hands at making maple syrup, we used cleaned-out plastic milk jugs, which we tied to the trees. You can place the jugs on the ground instead, but you’ll need a longer line. They are easy enough to collect from friends and family, and they’re free, but they fill up fast once the sap starts flowing. That’s not a big problem if your trees are close to your house, but I’d recommend 5-gallon buckets instead.

The trees that we tapped were a distance from our house. It was a bit of a haul into the woods to gather the sap, so it didn’t take much to convince us to go with 5-gallon buckets the next year.

A 5-gallon food grade bucket will run you around $3.00 at Lowes. It is worth upgrading the lids to ones that have a spout or the gamma seal screw-on lids. They make it easier to consolidate the sap for the trip back, or remove ice from the bucket. Any ice that you can remove from the sap will be less that you have to boil down.

Once you have collected the sap, you want to make sure that it hasn’t spoiled. It will spoil if it becomes warm and sits for too long. If the sap is clear and you can see the bottom of the bucket, you can use it. Murky sap is a good indication that it has spoiled. If you have more sap than you have time to process it and you have an extra fridge, you can store it there for up to seven days until you’re ready to boil it down. 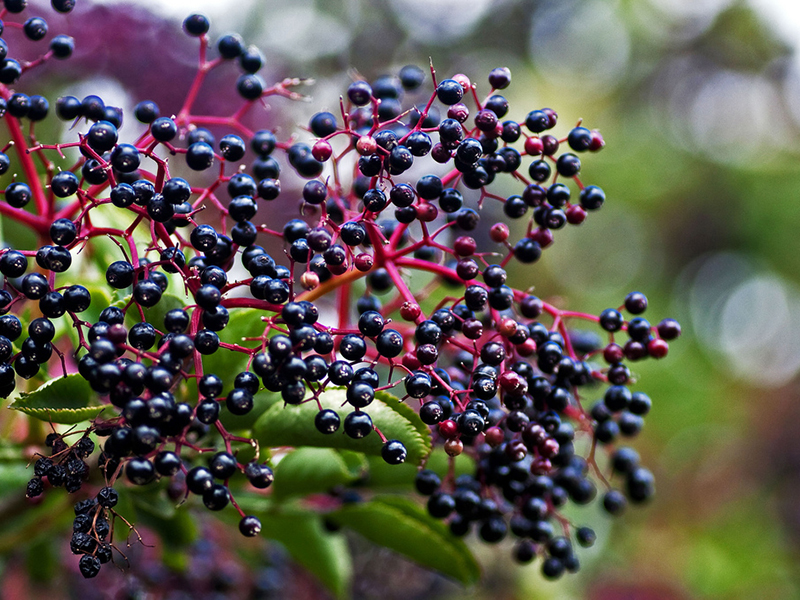 Before boiling, run the sap through a strainer and cheesecloth to filter out any debris. Even with a lid on the bucket, you’ll still get particles in the sap.

Commercial operations use evaporators, which have plenty of surface area, and will boil sap down faster. For our small-scale operation, we just use pans that we have on hand and an outdoor fire.

You want to avoid boiling down all the sap inside. It takes 40 gallons of sap to boil down to 1 gallon of maple syrup and that is a lot of boiling and steam. Avoid using a gas range for the same reason.

If you decide to continue making maple syrup, you may eventually opt to purchase a hobby-sized evaporator or even build your own from plans you find online.

In years past, making maple syrup was a family affair and everyone was involved, from tapping trees, to collecting, and boiling down. While I was responsible for boiling down the sap outside, once I boiled it down a fair bit, I brought it inside to finish, where I had better control over the heat source. Doing all the boiling down outside can cause off flavors from high heat that causes scorching and small pieces of char to fall into the sap.

The sap is boiled until it is 7 degrees above the boiling point of water, which will depend on your elevation. You should use a hydrometer to determine when the syrup is ready, but can also use more homespun ways. We found that when we stirred it and it bubbled a lot, the syrup was generally close to being done. Take some out on a spoon, let it cool and check the consistency. If it is still too runny, keep boiling it down.

Since you’ll be using the maple syrup for your own family, you don’t have to worry about grading the color or getting the density right. If it is too thin, you can’t sell it but it tastes just as good.

Once the syrup is ready, you have the option of filtering again. If you don’t (we never did), you wind up with sediment in the bottom of the jar. If you filter, you can use a few layers of cheesecloth or even a coffee filter.

For long-term storage, use the boiling water canning method to preserve the syrup. Be sure it is at least 180 degrees or more before ladling it into hot, sterilized canning jars. Process the hot syrup in a boiling water bath for ten minutes or more, depending on your elevation. (Extension Service guidelines are available on the internet.) Unopened and canned in glass jars, maple syrup will last a long time, perhaps 50 years, but you won’t have to worry, because you won’t let it last that long on your shelves. Once you open it, you can leave it in the fridge for several months.

With a bit of time and effort, you’ll have maple syrup that makes store-bought, and you’ll invent excuses to have pancakes for dinner! 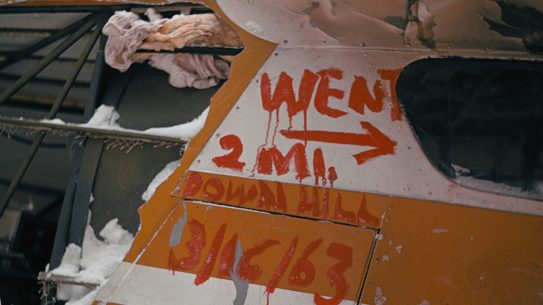 Stories of Survival: Helen Klaben Stranded for 49 Days in a Yukon Winter

Helen Klaben was a 21-year-old from Brooklyn who’d never seen or done anything. She...