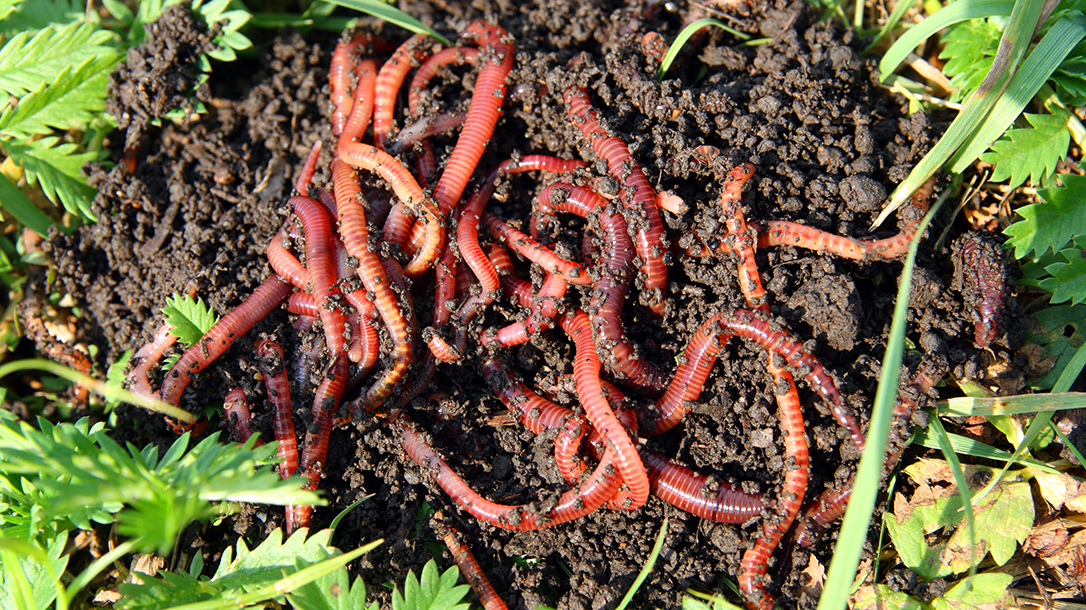 1 of 5
Photo by Shutterstock
Raising Earthworms for Bait or Business
Earthworms can be raised easily with little effort, but can be used for a variety of things. 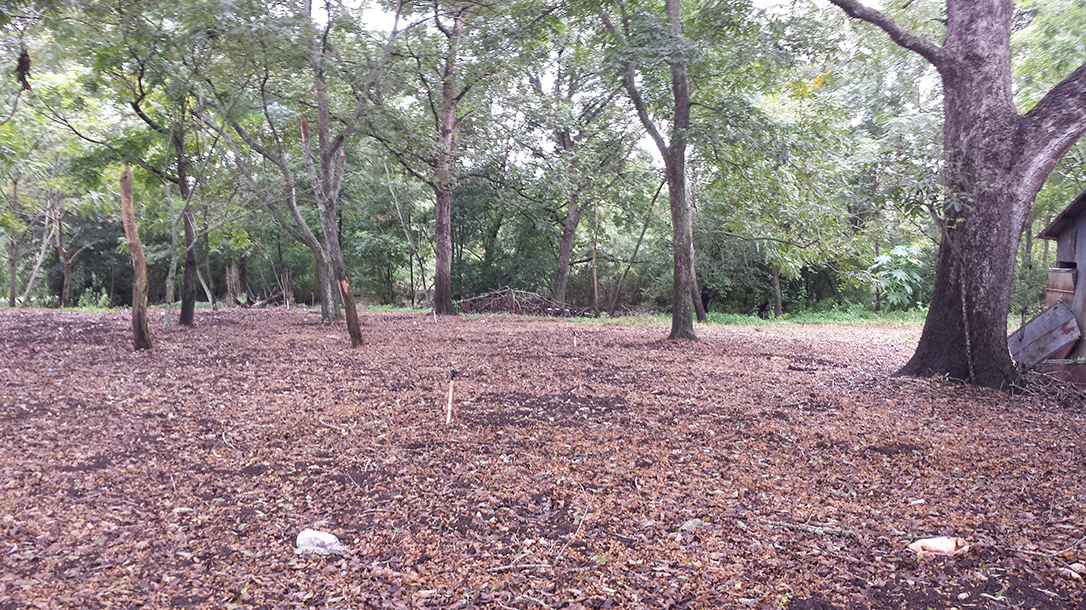 2 of 5
Photo by Jim Dickson
Raising Earthworms for Bait or Business
Plowed earthworm beds are shaded by pecan trees and covered with mulch. 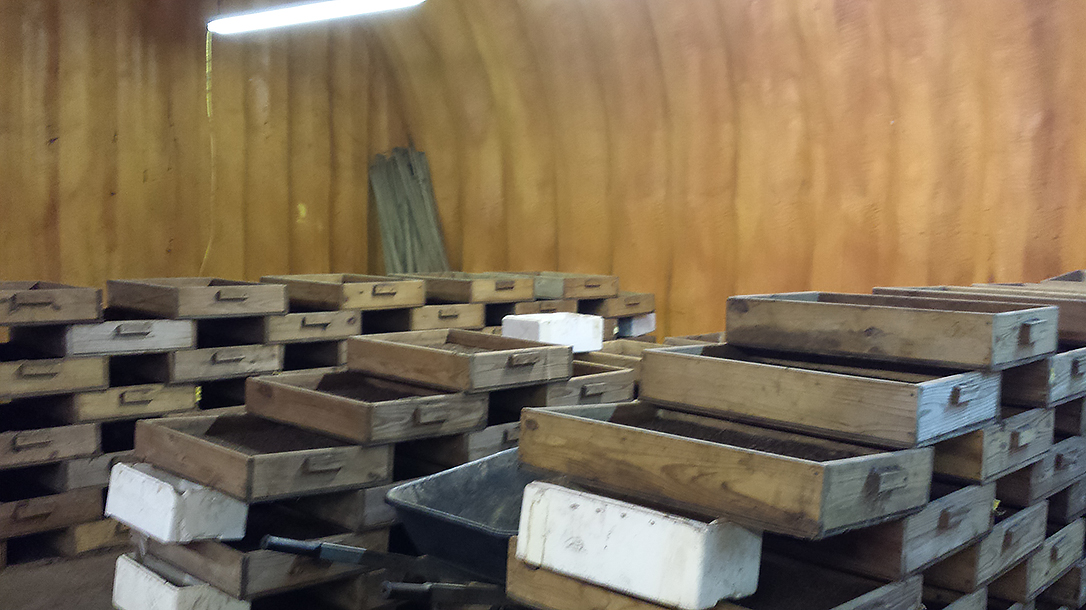 3 of 5
Photo by Jim Dickson
Raising Earthworms for Bait or Business
Stacks of wooden boxes with screened bottoms for the earthworms to crawl through in the final stage of the cleaning process before packing. 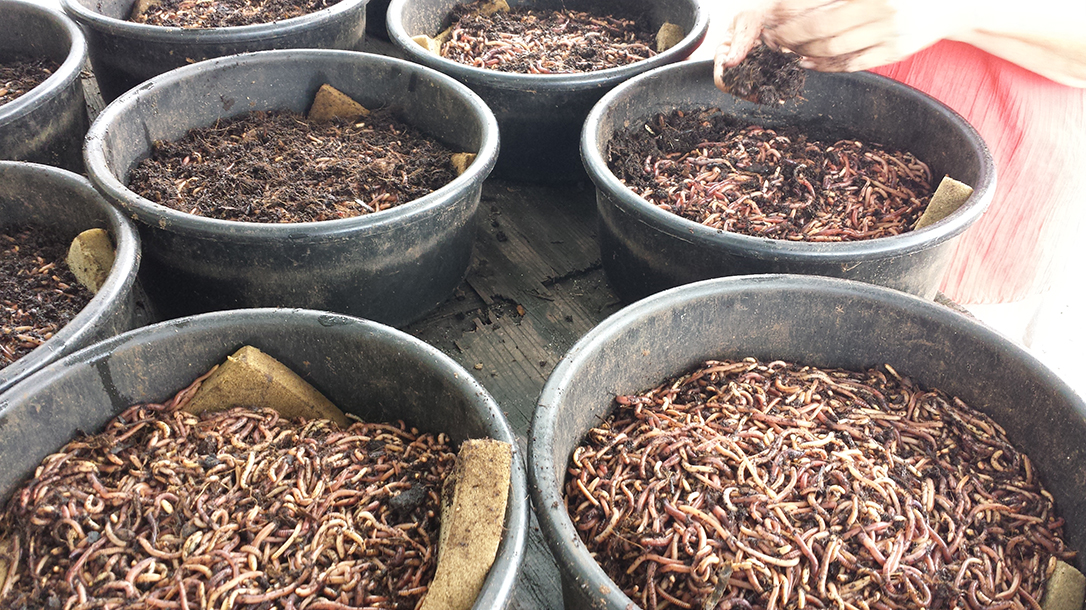 4 of 5
Photo by Jim Dickson
Raising Earthworms for Bait or Business
The worms are watered daily and fed once or twice a week. 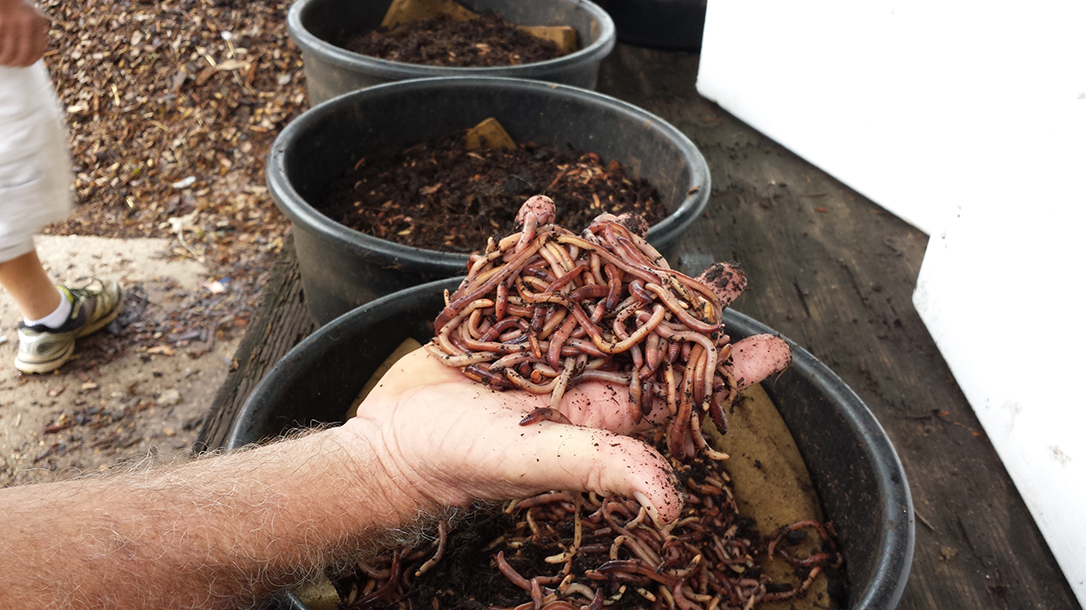 5 of 5
Photo by Jim Dickson
Raising Earthworms for Bait or Business
A bucket of worms can mean a lot of bait or a bucket of profits. 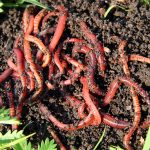 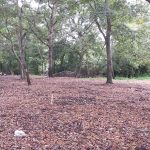 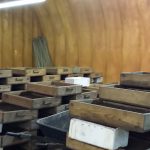 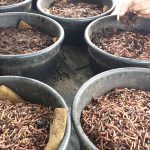 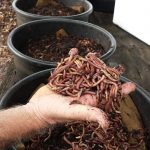 Whether you want to raise just enough earthworms for your own fish bait needs, an extra source of income or desire a full-time business, raising earthworms is an easy and practical thing to do. The red wiggler earthworm (Eisenia fetida) is a popular fish bait throughout the Southeast and is the worm discussed here.

Potential worm markets include stores that sell fish bait or pet food for exotic pets, people who want worms to make their compost piles work faster, worms to add to their garden to improve their soil and increase productivity, and worm castings to use as fertilizer. If you want to try raising worms for added income, start small and gradually work up in size as the business starts to grow.

The Ways of Earthworms

Worms need moist soil with plenty of decaying plant and animal matter for food. Too much water, though, can drown them and too little will kill them. They are rarely found below a depth of 2 feet. Primarily night feeders, they suck the soil and small food particles in with the muscles of their pharynx. They do not eat plants. Their constant loosening of the soil and fertilizing it with their casts is very beneficial to anything growing in it. 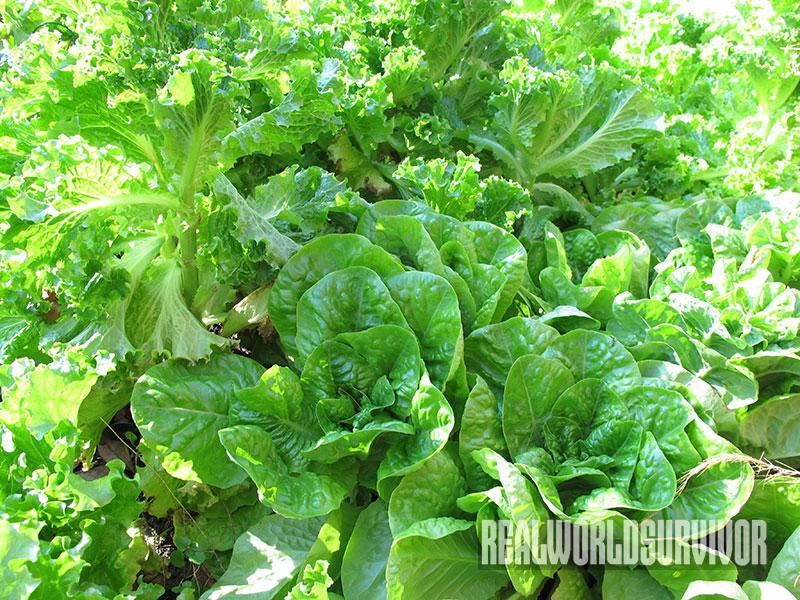 9 Ways To Kick-Start Your Compost

Earthworms bring up to 1 inch of well-fertilized soil to the surface every five years, and each year the amount of soil brought to the surface per acre will weigh from 7 to 18 tons. That’s a lot of fertilization, aeration and soil loosening, and why they are so valuable to farmers and gardeners.

For a small operation, raise worms in metal tubs that you keep in the garage or any shaded area.  (You can also use plastic or wooden tubs.) The number of worms you buy when getting started will depend on the size of the container and the reason you are raising them. For bait, use fewer worms in a given space so they will be fatter. For compost, increase the number. On average, if you buy one pound of red worms you will have about two pounds in four months. Paint all exposed metal surfaces to prevent rust. Rust can hurt the worms. Overhead lights are necessary to prevent worms from crawling out of any uncovered containers.

Soil should be a clay loam or a porous clay, but not a sandy clay. One-fourth of the volume should be dead leaves and well-rotted manure. If the organic matter is not well rotted, it can generate sufficient heat to kill the worms as it decomposes. Rabbit manure is often used with worms; if you are also raising rabbits, you will have plenty of manure to use with your worm operation once it is suitably decomposed.

A tub 2 feet wide and filled with dirt until it is 10 inches deep can produce 3,000 to 5,000 red wigglers a year. Reproduction will be better if you have two or more tubs so you can use the earthworms from one tub for a few months and then alternate to another for a few months.

Every two weeks you must feed the earthworms 1 pound of cornmeal and a half a pound of lard or vegetable shortening per tub. Mix it well into the soil to prevent mold and mildew getting to it before the worms can. Add water when you add food and keep the soil moist without adding more than the soil can absorb, lest you drown the worms. Coffee grounds are not worm food. That is an old wives tale. They are useless as food for worms.

For a mid-sized operation, construct worm boxes 6 feet long by 2 feet wide and 2 feet deep and fill them with dirt to a level of 8 inches with the same soil, manure and leaf mixture used in a tub. Moisten the dirt and add 6 pounds of cornmeal and 3 pounds of lard or vegetable shortening, taking care to mix it thoroughly into the top 2 to 3 inches of dirt. Add 600 to 800 red wigglers and cover the soil with wood strips or a damp burlap feed bag to keep the moisture in. Wait a month and repeat the feeding while adding 1 1/2 gallons of water to the box. Feed every two weeks thereafter. Do not overfeed or fail to mix the feed in the soil properly; uneaten food will spoil and foul the box.

Worms do have enemies. Mites, ants, rats and mice will eat the cornmeal and lard Armadillos will eat the earthworms. A very thin, light 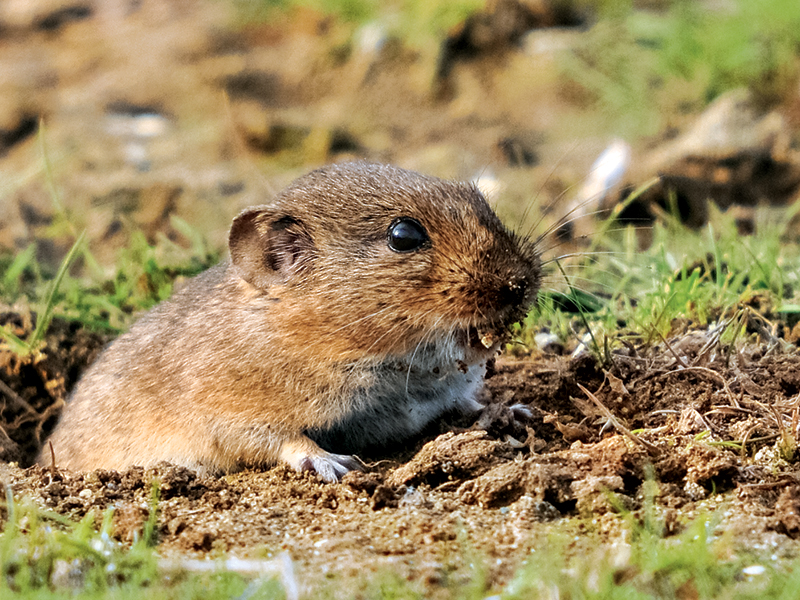 dusting of powdered sulfur over the top of the soil will kill the mites. A light application of pyrethrum will take care of ants and fly larvae. Use

only small amounts, lest you kill the worms. Do not let it get on their food. Do not work or water the bed for three to four days after applying pyrethrum.

If the worm boxes are supported on legs, simply putting the legs in a pan of oil will stop ants in their tracks. Support legs also raise the height of the boxes to a point where you don’t get a backache from stooping over to work with them. Install a screen to keep out rats, mice and hungry armadillos.

One of the best examples of a large-scale operation is Four R Farms of Slocomb, Alabama. This is a third-generation worm farm originally founded in 1943. In 1967, the late Melvin Reeder took it over and renamed it Four R Farms after himself and his three sons, Bobby, Tony and Eugene. Bobby was a professor of horticulture at Texas A&M University until he returned to the farm in 1979.

Four R Farms has its own fleet of delivery trucks covering the Southeast from Texas to Tennessee to the Carolinas to South Florida. If you have been fishing in the South, you have probably bought the farm’s worms at a bait shop. The Reeders sell to all markets for worms, and if you need worms for fish bait, pet food, compost heaps, garden aeration or anything else, they are your best source. They also sell earthworm castings (worm manure), which are more beneficial to soil than cow manure. The castings are a prime ingredient in the potting soil that they also make and sell, and it’s the reason that plants grow better in their potting soil than in many other mixes.

Four R Farms has 18 acres for worm production, with pecan trees shading the worm beds. The ground is plowed and covered with mulch, such as peanut hulls, and watered daily. Twice a week, feed is scattered on top of the bed like you would throw fertilizer on a lawn. They use a mixture of cornmeal with a protein source, such as cottonseed meal, which is similar to the feed used to finish hogs. As long as there is plenty to eat, the worms don’t leave the beds.

Bait-sized worms are dug by hand with a sawed-off potato digger and pan. A good bed will be dug about five times a year. Once dug, the worms are brought to the packing shed in plastic buckets and stored in a cool, dry place under lights for at least 24 hours, a process referred to as “crapping out.” They are then run through a cleaning machine where the sick or injured worms are screened out. Next they are deposited in wooden trays with screened bottoms that further clean them as the worms crawl through the bottom mesh. Most are now sold in bait cups, but worms for other uses get sold by the thousand instead of by the bait cup. The shelf life of a red wiggler is four weeks. 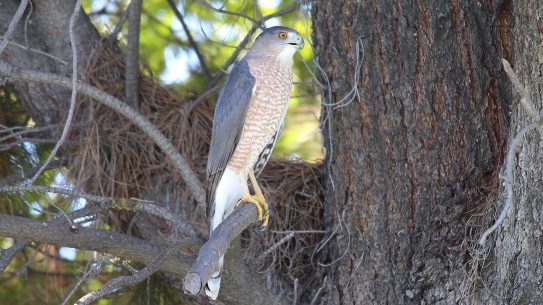 Nobody knows why Lassen County's Richard Parker shot 126 birds of prey on his...