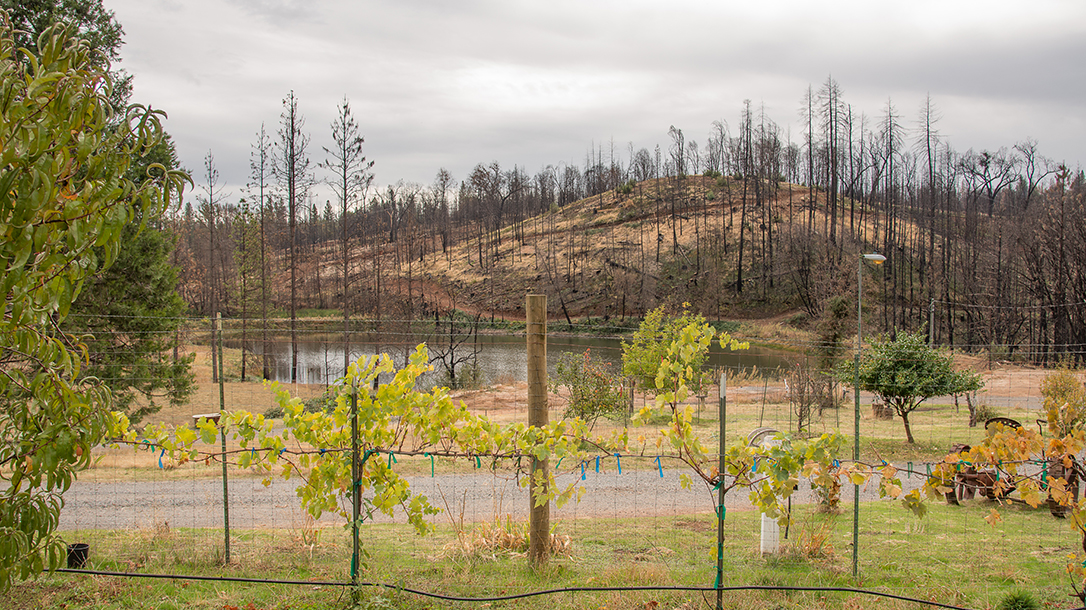 1 of 7
Photo by Thomas Kirchen
The Butte Creek Fire
The green grape vines are a stark contrast to the nearby charred hills. 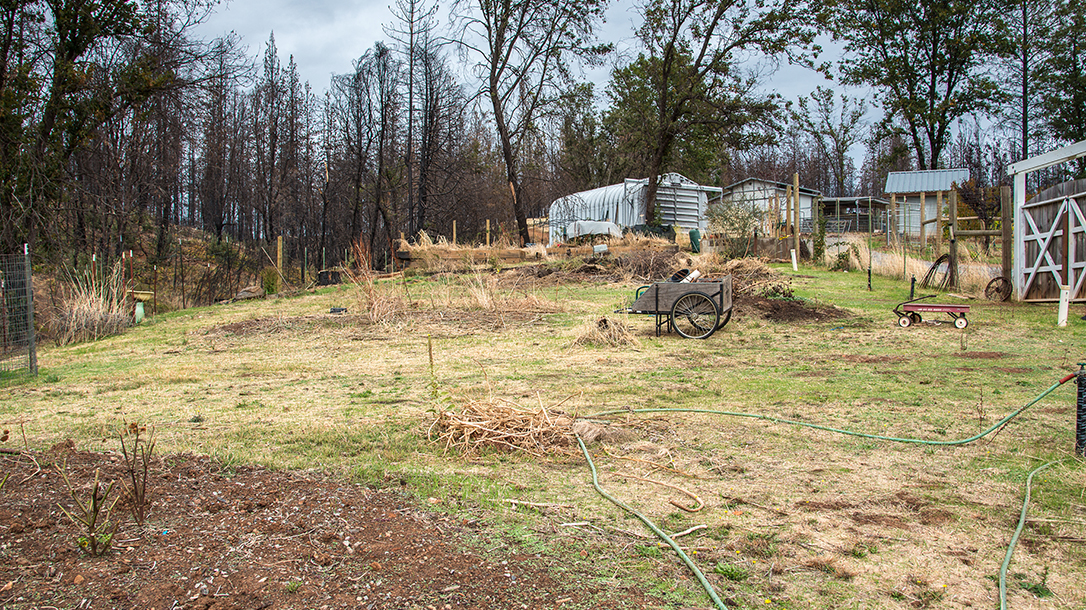 2 of 7
Photo by Thomas Kirchen
The Butte Creek Fire
The fire destroyed their home but spared the barn, pump house and greenhouse. 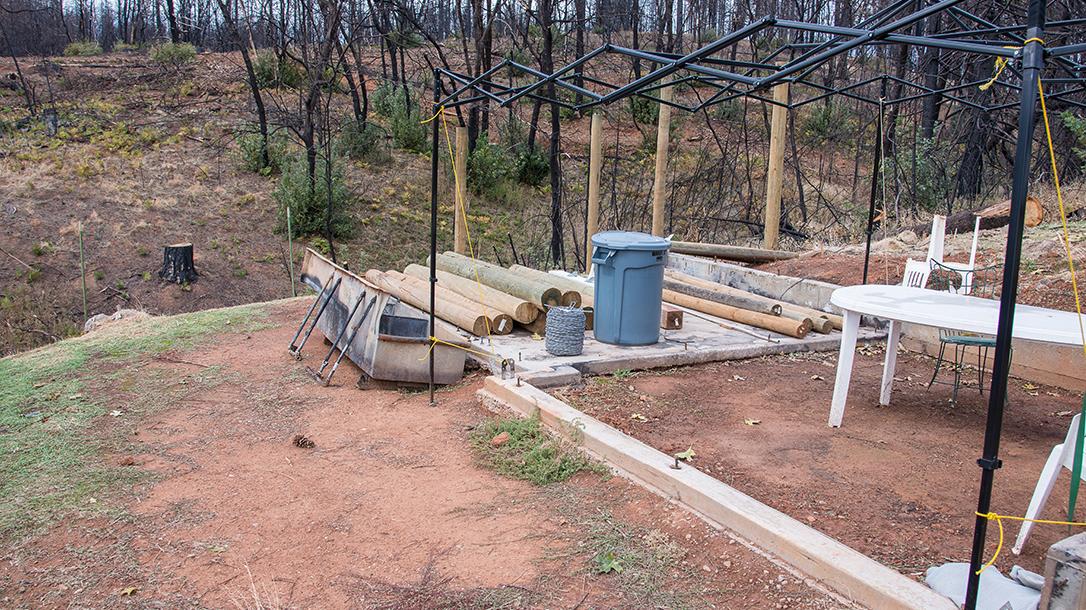 3 of 7
Photo by Thomas Kirchen
The Butte Creek Fire
After the fire, the families set on rebuilding their properties. 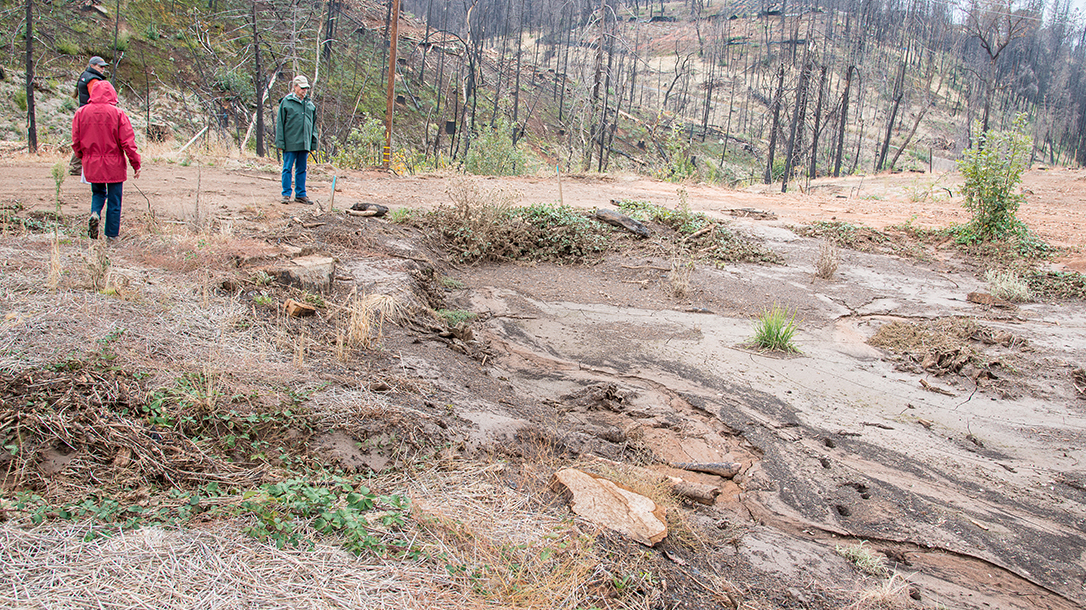 4 of 7
Photo by Thomas Kirchen
The Butte Creek Fire
Surveying the aftermath of the fire and the damage of recent rains. 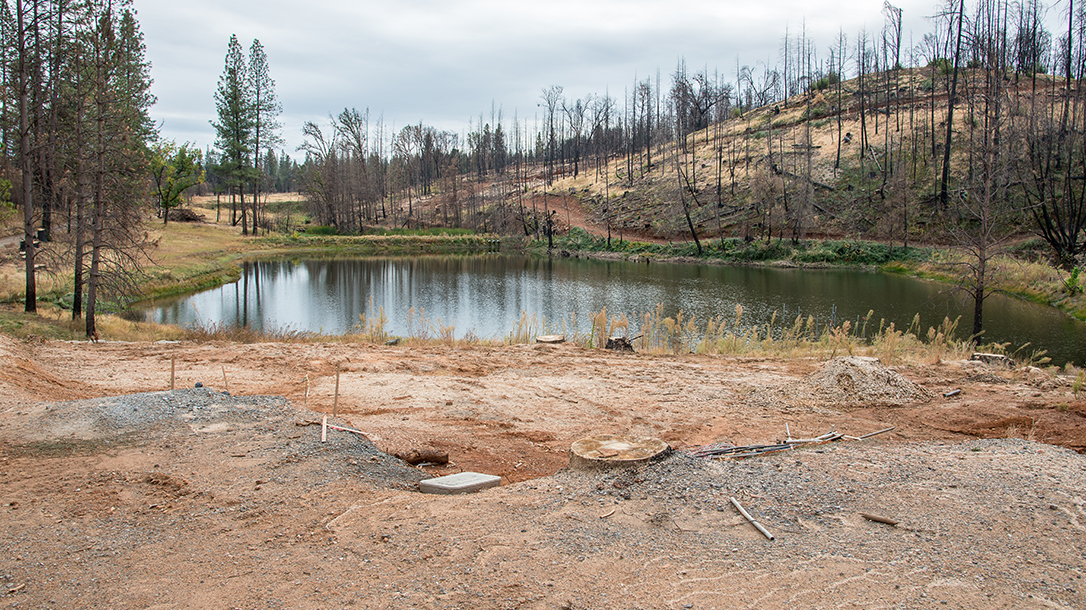 5 of 7
Photo by Thomas Kirchen
The Butte Creek Fire
There is new growth around the pond. 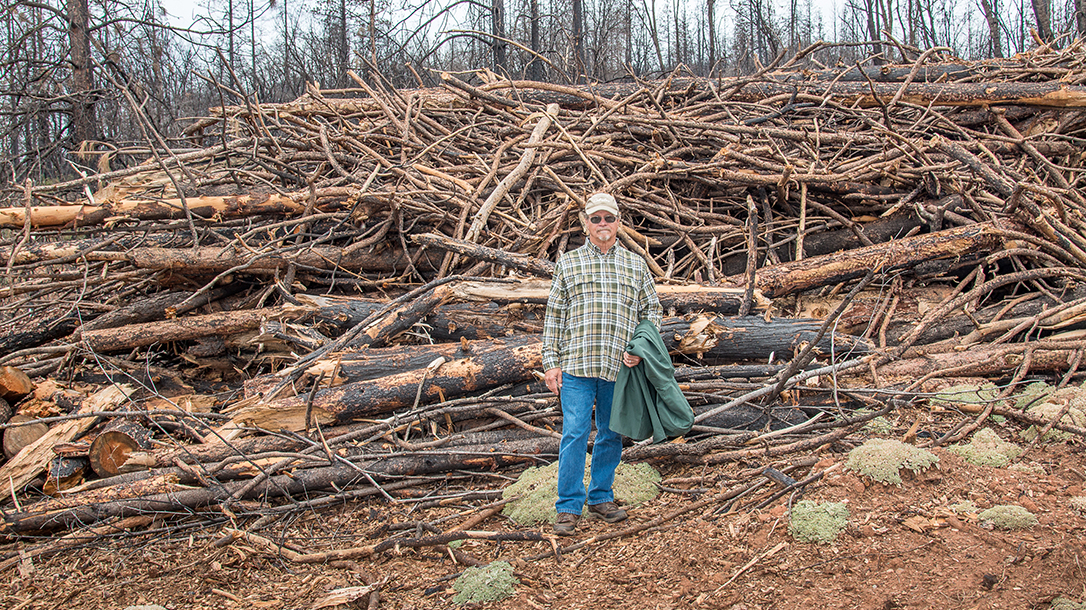 6 of 7
Photo by Thomas Kirchen
The Butte Creek Fire
Dale Ansel in front of logs gathered in the aftermath of the fire. He bought a sawmill so he and his neighbors could use the larger logs. 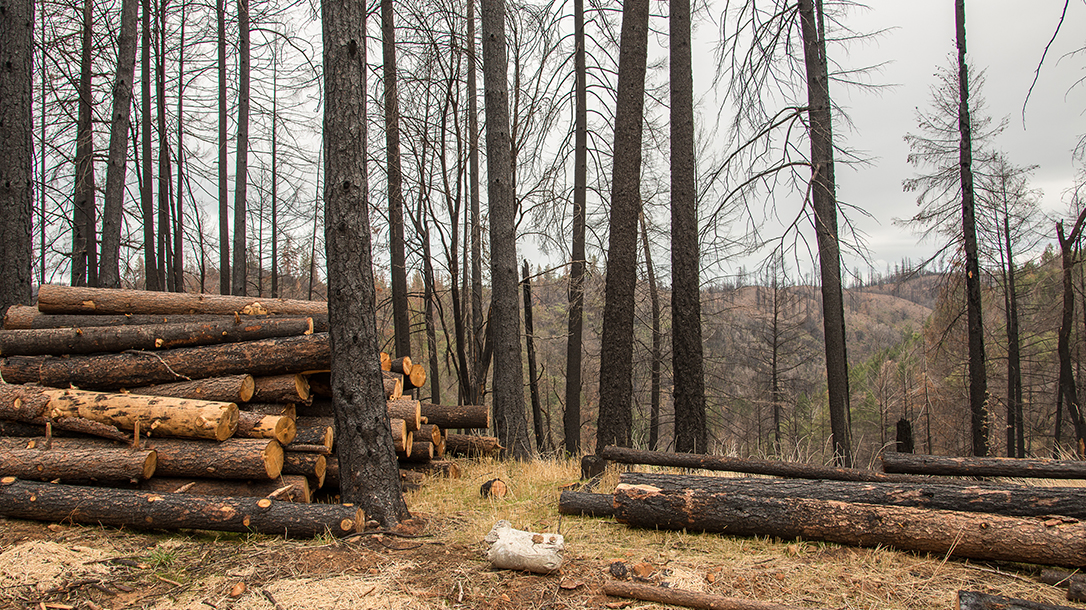 7 of 7
Photo by Thomas Kirchen
The Butte Creek Fire
Stacked logs ready to head to the sawmill. 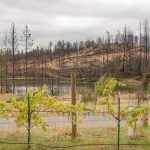 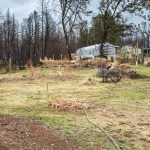 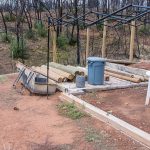 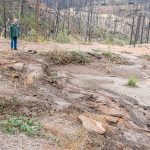 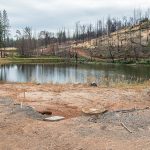 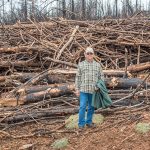 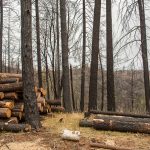 Jack Bennett was the owner of a fire-charred landscape that a year ago had been a beautiful plot of old-growth forest nestled in a private canyon of lush greenery. He had plans to build retirement home for him and his wife that year, in this haven of nature. Now, plans were up in the air. So many questions—how long before it was green again? Could they live there knowing what it looked like before, seeing it now, so different?

It was my first glimpse of the devastation the Butte Fire had wrought on 76,868 acres of California’s Sierra Nevada forest in September of 2015. The fire left 475 homes and countless outbuildings destroyed, and two people dead in three day’s time. The governor of California declared both Amador and Calaveras counties a state of emergency on September 11, 2015.

Jack said his once-forested 65 acres were technically classified as an old-growth Mediterranean Foothill Montane forest, which meant it was a mixture of hardwoods and conifers, and it was very healthy before the fire. It contained mostly ponderosa pine with Douglass fir and different oak species, such as canyon live oak and black oak. His prize tree, a rare California nutmeg, estimated to be close to 400 years old, stood like a stark skeleton in the middle of a blackened canyon. It took less than 20 minutes for the fire to rip through his acreage. 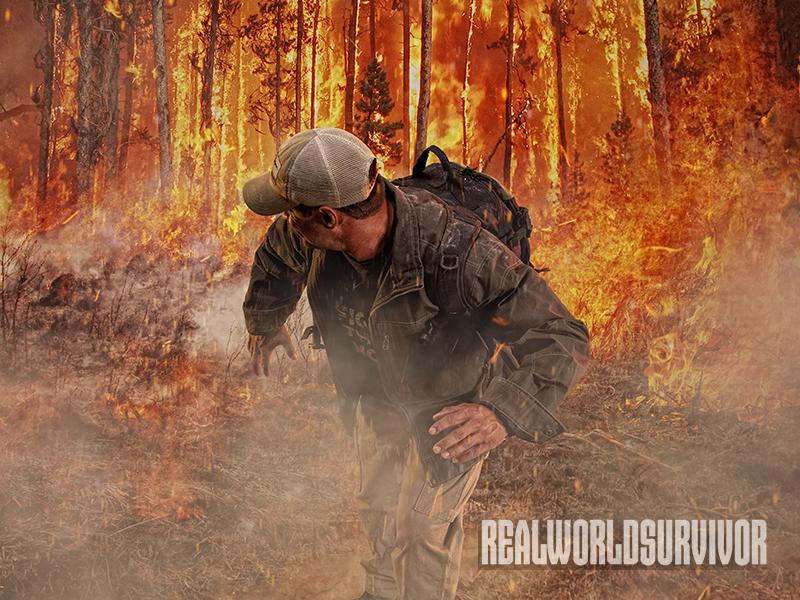 Hellfire on Earth: How to Escape & Survive a Wildfire

He took us on a walking tour of the property, which is the only way to appreciate the heartbreak that such a catastrophic event can leave in its wake. Jack knew every inch of his land. Such familiarity can only be known through close connection to nature, and many walks. He told us, “Some of the sugar pines were 200 to 400 years old, some oaks at least 300 years old.” We walked on, not knowing any words that could dispel the disappointment of broken dreams. He explained that in many fires, trees would be left standing alive, but this fire was so hot, so fast-moving, and so explosive as the crowns of trees literally exploded into the air, that the reflective heat from the tops of the trees boiled the xylem, the tree’s life blood that flows up the trunks.

As soon as people were allowed back into the burn area, Jack hopped into action, spreading bales of straw, seeding native grasses, bracing up hillsides with more bales and fallen logs. He was in a race against time, aware that in the next month or so rains would be coming and would wash any topsoil down the canyon and into the creek. Replanting his slopes would then be virtually impossible. Some of his neighbors walked away and never looked back. Some stayed and began shoring up their lands, with the help of local relief organizations and community volunteers. Most everyone was operating on automatic, in a state of shock or a kind of post-traumatic stress disorder.

Jack and his wife have taken a cost share grant to reforest the property with the NRCS (Natural Resources Conservation Service), a federally-funded agency. He said, “My battle will go on at least ten years. I’m 64, but I have an obligation to the land.” He calls it his legacy. “It will be a wonderful gift to my kids and grandkids someday.”

Cat and Dale Ansel used to live about a mile from Jack Bennett. Used to, because now they were staying in a small place in a neighboring town. They were waiting for us in their driveway as we drove back down the road. They own 58 acres, and had a custom home with a large deck overlooking the pond and surrounding hills. Most all of their property was burned, including the home. The garden and nearby large chicken coop were destroyed, but the pump house, barn, and a fiberglass greenhouse that should have melted in a flash were spared—fire works in mysterious ways.

In the Fire Zone 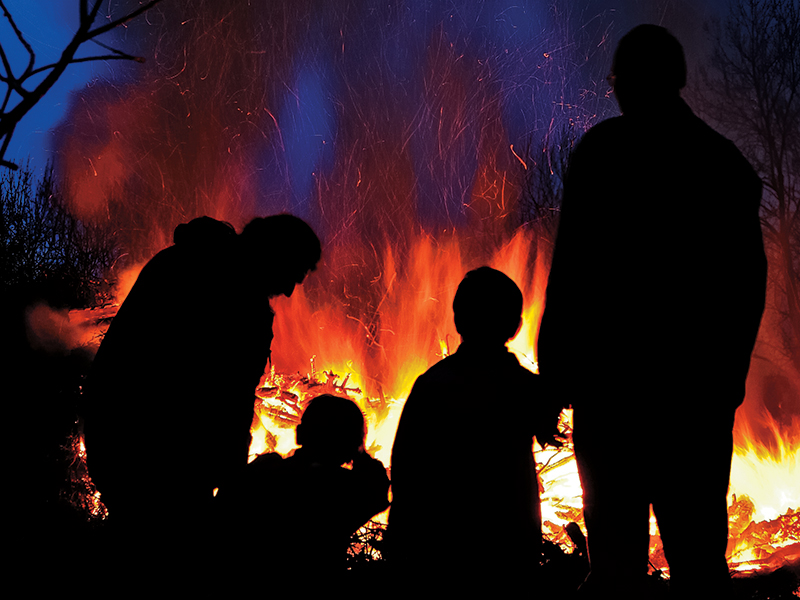 We found out from Cat and Dale that as soon as trucks could re-enter the fire zone, cleanup began. When homes burn, the construction materials leave behind toxins such as heavy metals like lead, and caustic residues that enter the topsoil. They are hazardous to the landowners, the streams, and the wildlife. The topsoil is scraped off until no detectable toxins are left. All concrete is placed in one pile, all scrap metal in another, and trucks run day and night for weeks, transporting the waste to drop off sites. Myriad other agencies appear on the scene to do their part, sometimes seeming more like a nuisance than a help. The cleanup felt endless, until finally, the crews left and it was quiet.

As the photographer and I talked with the Ansels, it became clear that they were still in shock, but they had decided to stay and see what they could do to adjust. Cat said, “You have to be resilient,” but she added that the worst part was when you psychologically began to get hope and then the hope would get dashed, over and over. It was like losing a loved one. They did not take the NRCS grant because one of the requirements was to place a lien on the property for the value of the grant, and the contract was a 10-year commitment.

Dale was somewhat optimistic about the future of the property. He had bought a Lucas sawmill so he and Cat could set it up over the larger trees and begin cutting lumber. They hoped that other neighbors might want to use it also, and realized that the true value of community was probably the one thing that would get everyone through this catastrophe. They felt the most help of all was to be found with the neighbors and community members lending a hand to each other. One local farmer even came over with helpers and began cutting dead trees and laying them on the steep hillside to slow the water down and stop erosion from filling their pond.

Sadly, Cat and Dale had a backup water system for fighting fires, but they were out of town when the fast-moving fire struck, and the house-sitter only had time to rescue the animals and get herself out alive. Their neighbor tried to save his home but when the giant chunks of burning tree branches were showering his roof and deck, he had no choice but to get out fast and save himself.

As we stood there discussing the incident, frogs sang in the pond, and Cat had sighted fish and turtles recently. We could see new green shoots of trees and brush coming up everywhere through the mulch of the rice straw. It was hard to ignore how fast Nature planned her return in the fire’s aftermath. 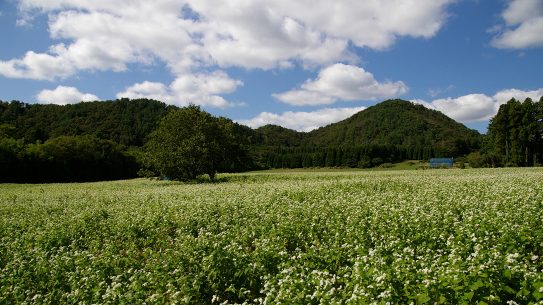 In a vegetable garden, cover crops can protect the soil from winter rains, capture...