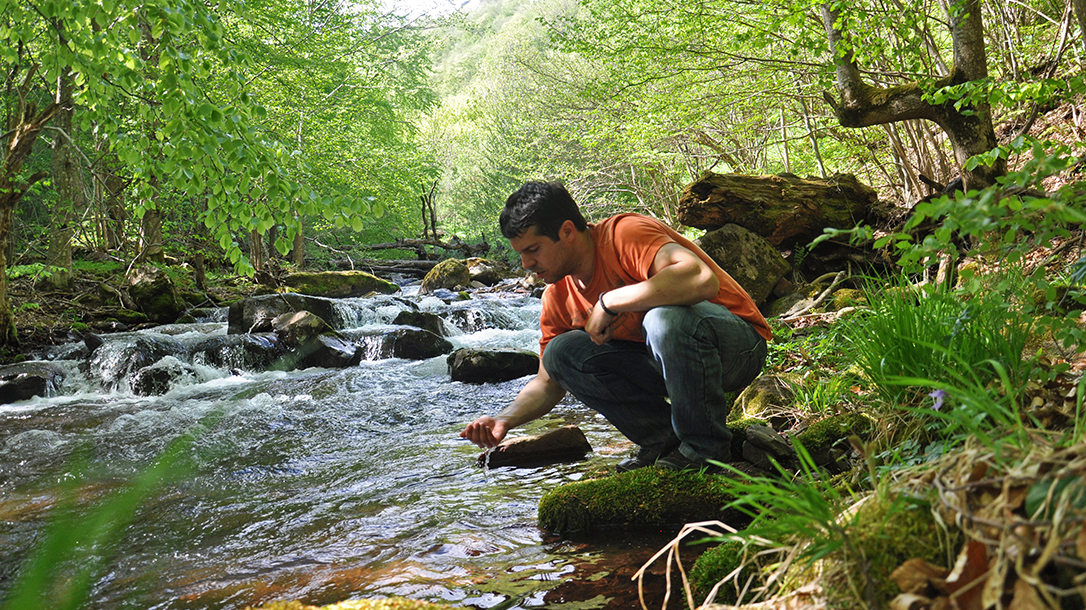 1 of 3
Photo by Shutterstock
Think Before You Drink Natural Sources
Some of the contaminants in found water can cause fever, cramps, diarrhea, renal failure, and death. 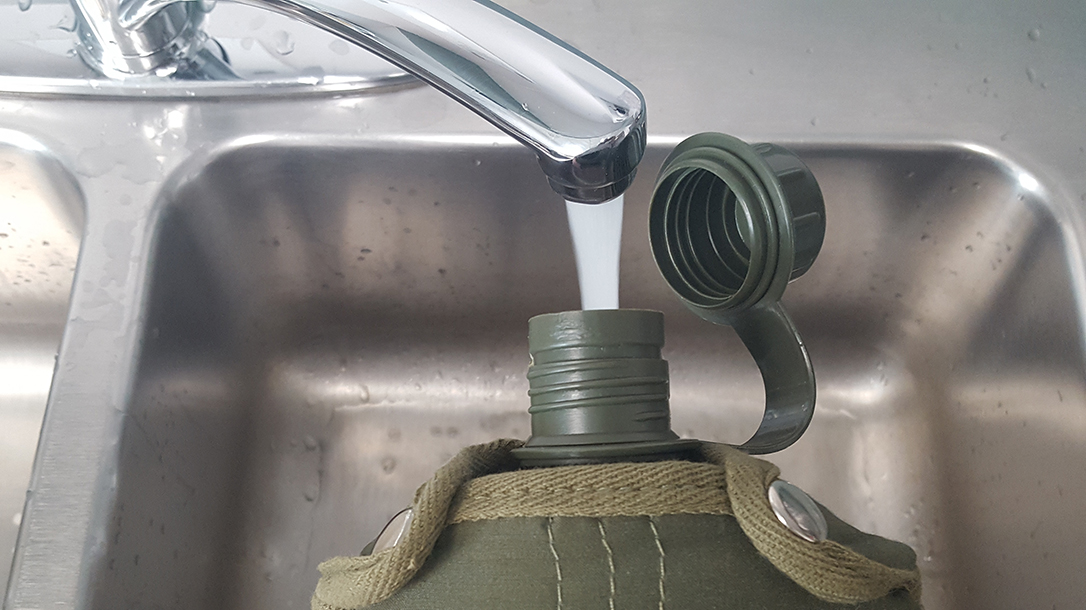 2 of 3
Photo by Phil Elmore
Think Before You Drink Contaminents
The water you’re about to drink could contain multiple contaminants. 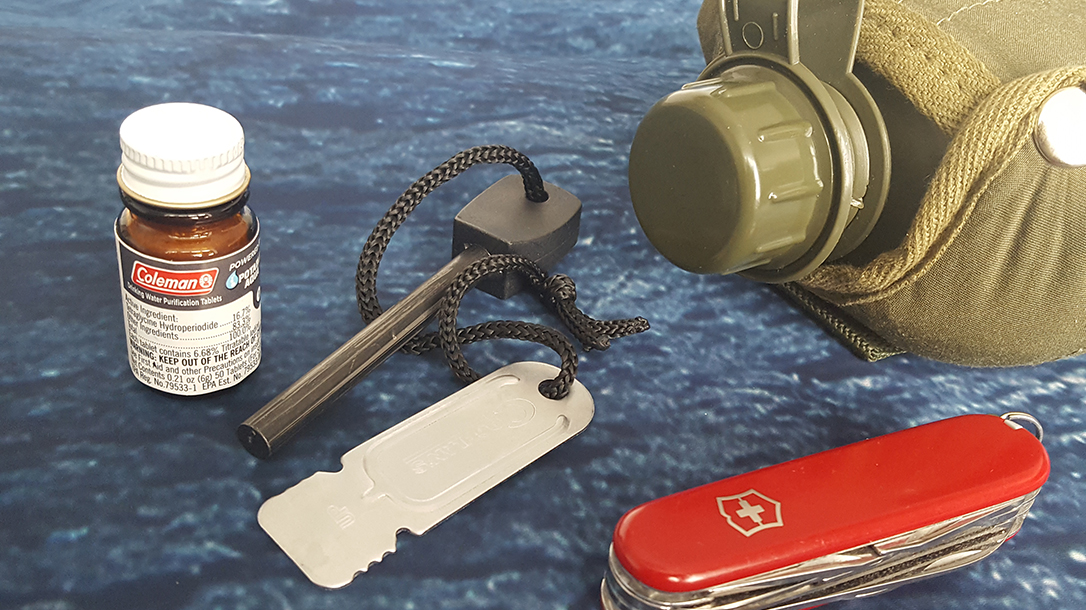 3 of 3
Photo by Phil Elmore
Think Before You Drink Tools For Safe Water
A means to make fire to boil water, and a means to treat it chemically, are critical survival items. 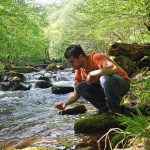 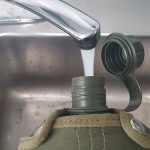 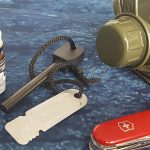 If the idea of drinking untreated water from a creek, stream, or rainwater catchment system fills you with dread regarding things like Giardia intestinalis, then good. The problem is that you still probably aren’t worried enough. It’s one thing to get sick when you go camping or hiking. That’s inconvenient and, yes, possibly dangerous for you. Chances are also good that you’ll be able to get to medical attention and recover. In a survival scenario, you are, by definition, cut off from normal support services (and hence the need to survive). You cannot afford, in a moment’s laziness or even desperation, to gulp down a mouthful of creek water full of salmonella and E. coli and then get violently ill. Untreated drinking water contains countless dangers. All of which can make you sick enough to cause your death when are already dealing with an emergency situation.

The World Health Organization’s fact sheet on non-typhoidal salmonella says that it is one of four key global causes of diarrheal diseases. While most cases of salmonellosis are relatively mild, it can kill you. Already, antibiotic-resistant strains of Salmonella are emerging. 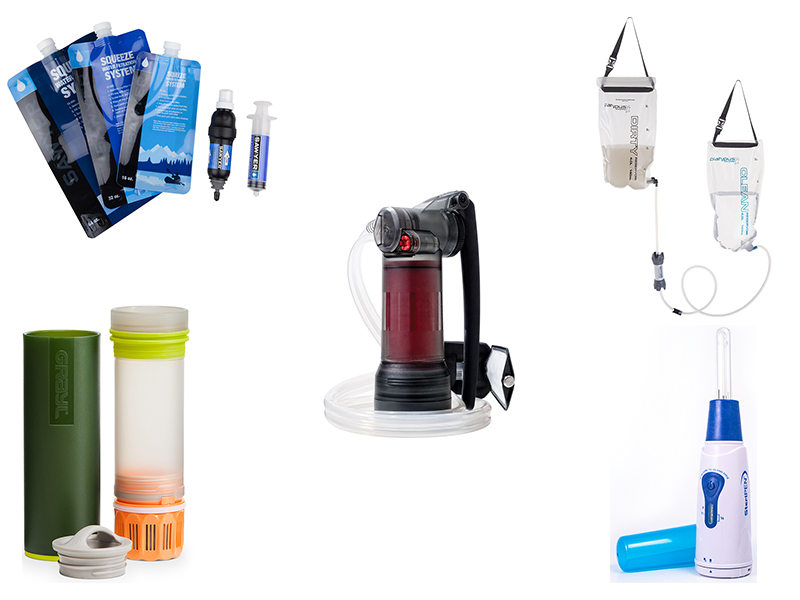 Symptoms of salmonellosis include abdominal pain (cramps), diarrhea, nausea, vomiting, and fever. It can take up to three days for symptoms to occur. Then the disease takes about a week to run its course, even without treatment. What’s truly terrifying about salmonella is that can pass from animals to people through contaminated food, from person to person through fecal-oral contamination, and even directly from infected animals to people. It’s possible to be contaminated with salmonella but remain asymptomatic, which means you’re spreading the disease to others (especially if you prepare food and don’t wash your hands thoroughly).

You can easily get salmonella from untreated water (and from ice made from contaminated water). Boiling water or chemically treating it with disinfectant will normally kill salmonella. Cooking food thoroughly will also eliminate it.

The Center for Disease Control and Prevention warns that salmonella can find its way into your drinking water because it is found in every region of the United States (and across the world). Groundwater and well water contaminated with human and animal feces may carry salmonella. Waste can find its way into the water through any number of routes (including sewage and storm runoff, agricultural runoff, and other wastewater issues). Shallow wells (and shallow water sources, including standing surface water) are particularly vulnerable.

Salmonella is only one of many possible contaminants in found water. Another is coliform. The coliform family of bacteria includes fecal coliform, or escherichia coli—better known as E. coli. You have E. coli in your intestinal tract, as do other mammals. E. coli infections frequently find their way into humans through contaminated drinking water and also through water used in swimming pools (hence the chlorinated water). It’s also a red flag for, well, poop. Where there is E. coli, there has been fecal matter from animals or humans. Thus, an outbreak of E. coli traced to drinking water or to your local public pool indicates the presence of… well. You know.

E. coli will be found naturally in untreated water sources, given that the animals drinking from those sources, and doing their business in and around those sources, aren’t exactly doing so under a sign that says, “Employees must wash hands.” If you are exposed to E. coli, you may not experience any symptoms at all. You may also get diarrhea and cramps. The FoodSafety.gov fact sheet says that the worst type of E. coli, 0157:H7, can cause bloody diarrhea, renal failure, and possibly death. This strain of E. coli produces a toxin called Shiga, and can in turn cause a complication called hemolytic uremic syndrome, or HUS. Treatment for HUS includes dialysis and transfusions, as HUS destroys red blood cells and harms your kidneys.

Even if you experience no ill effects from E. coli, where there is fecal coliform, there may also be Giardia and cryptosporidium. In other words, drinking water contaminated with the lesser strains of E. coli is disgusting, but may not be the worst of your problems from a physical standpoint.

Do enough searching on the topic and you’ll find plenty of self-described preppers and survivalists who insist that a lot of “backcountry” water sources are crystal-clear, pure, and safe to drink. The problem is that it only takes one drink from one contaminated supply to make you sick. As we’ve learned, that sickness can range from asymptomatic to so severe that your kidneys are being damaged. Under day-to-day circumstances and especially in an emergency or survival scenario, you cannot afford to risk being infected. That means always treating found water (preferably through boiling). It also means carrying anti-diarrheal medication with you in your gear, be it your bug-out bag, your hiking gear, and in your car.

More importantly, though, the dangers of drinking contaminated water—even under what we consider ideal conditions—demand that we exercise personal vigilance. You cannot afford to become complacent. You cannot afford to get lazy. Telling yourself that the stream looks clear and you’re high enough up the mountain isn’t good enough. No matter what your rationalizations, you can never say, “I don’t feel like boiling that water today.” A single slip is all it takes to make you ill. Always treat found water, even in the most dire survival situations. Just because someone in your position survived it before means nothing. For your survival protocols to mean anything, they must be applied consistently.

Poison in Your Water?

Is there poison in your drinking water? There just might be, especially if you’re drinking well water. Specifically, your well—and even water you find—may contain arsenic. 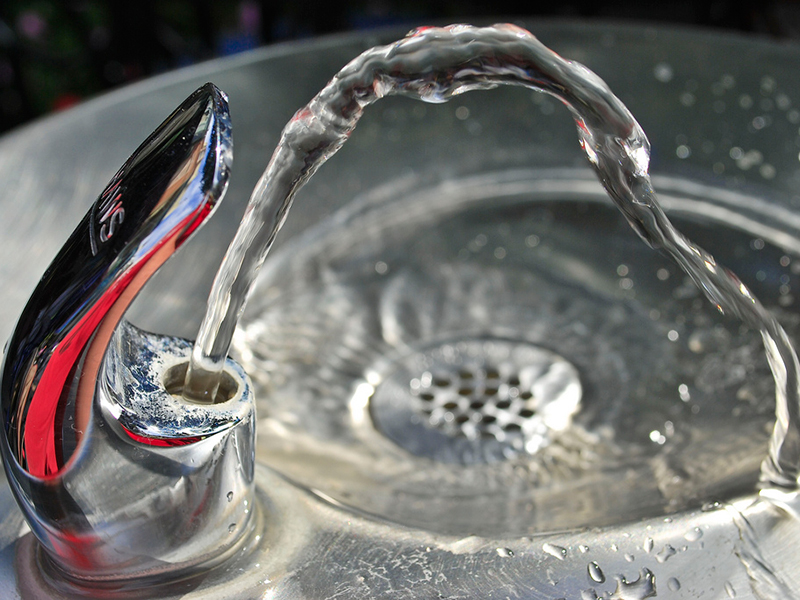 Arsenic has a rich history of murder and suicide, particularly in the 18th and 19th centuries, when a brief fascination with arsenic-containing green dyes. The copper arsenate in these pigments frequently sickened the factory workers and artists who used it. In 1858, the infamous Bradford sweets poisoning killed 21 people and sickened 10 times as many. A candy manufacturer mistakenly bought 12 pounds of arsenic trioxide instead of powdered gypsum (used as filler and sugar-substitute).

According to Patient.com, arsenic is a heavy metal that occurs naturally within the Earth’s crust. It can be found in both organic and inorganic compounds, but in its inorganic form, it is highly toxic. If you breathe it, eat it, or even absorb it through your skin, it can poison you. Some types of arsenic are more easily absorbed dermally than ingested, while others are the opposite; trivalent arsenic is 60 times more poisonous when you get it on you, while pentavalent arsenic is deadlier to ingest.

The Center for Public Integrity in Washington reports that 40 million Americans get their water from private wells, most of which have not been tested for arsenic. An estimated 3 million of those people are consuming water that doesn’t meet EPA standards. The Center reports that arsenic is especially common in the Western United States, including hot spots in Michigan and Maine. While the current drinking-water standard for arsenic in your water is 10 parts per billion (per the EPA), that was lowered from 50 parts per billion in 2001. There’s quite a bit of debate about whether that “safe” level truly is just that. Even now, activists and environmentalists argue that 10 parts per billion is too high, particularly over long-term consumption.

Symptoms of arsenic poisoning include gastrointestinal distress, dehydration, diarrhea, heart problems, respiratory distress, and even gangrene in the extremities. Kidney failure, jaundice, seizures, rashes, and even coma are also a possibility. In other words, arsenic is deadly stuff and, if you use well water, you need to have it tested. Boiling and chemically treating your water does nothing to remove arsenic (and can actually increase the arsenic concentration through evaporation during boiling). Only an approved filtering process, such as anion exchange (which operates like a water-softening system) can remove arsenic. This is not a substance with which you can afford to play around.

This article is from a previous issue of Survivor’s Edge. Grab your copy at OutdoorGroupStore.com. 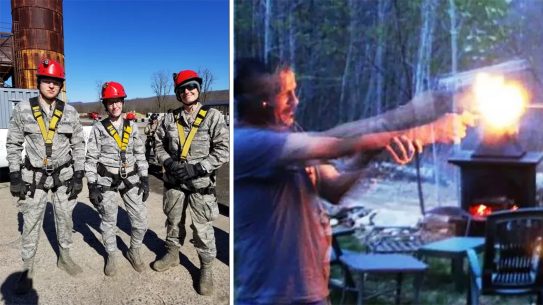 Patriot’s Day 2018: Celebrate Your Freedom and 2A Rights

With patriotism and Second Amendment rights leading the way, Patriot's Day is a day...