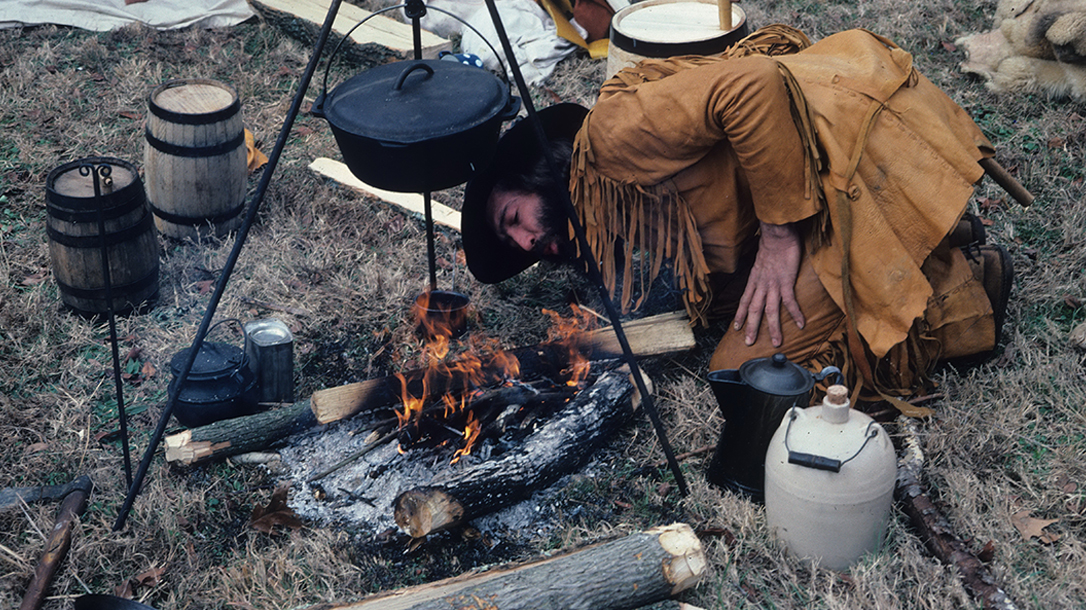 1 of 3
Photo by J. Wayne Fears
Mountain Man Food Preparing a Meal
Meat was often cooked over open fires on spits made of wood or those made in a blacksmith shop. 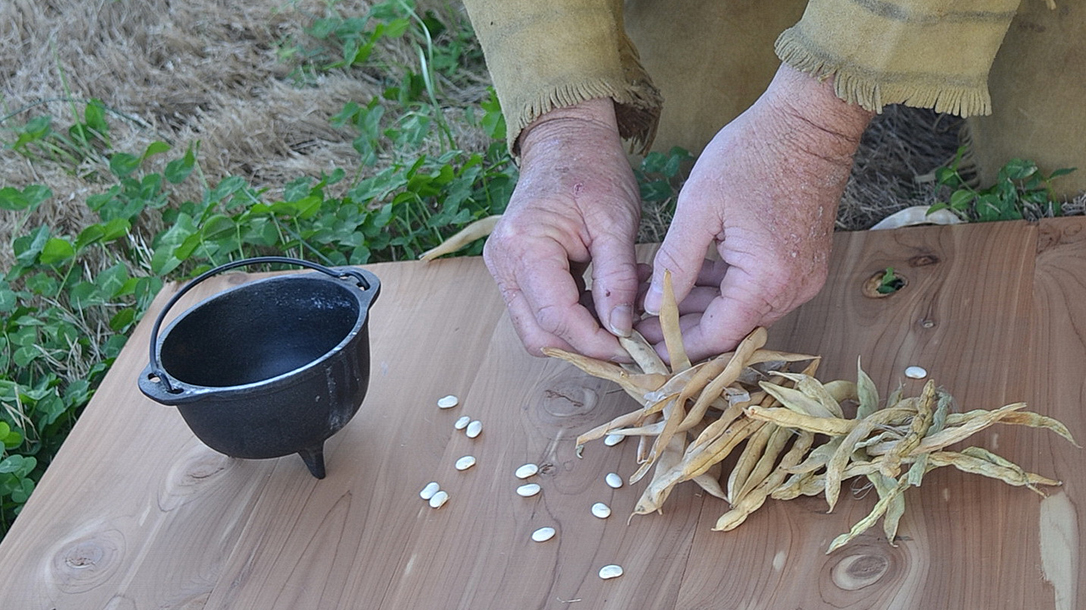 2 of 3
Photo by J. Wayne Fears
Mountain Man Food Dried Beans
When available, dried beans were vegetables easy to pack for long-term use. 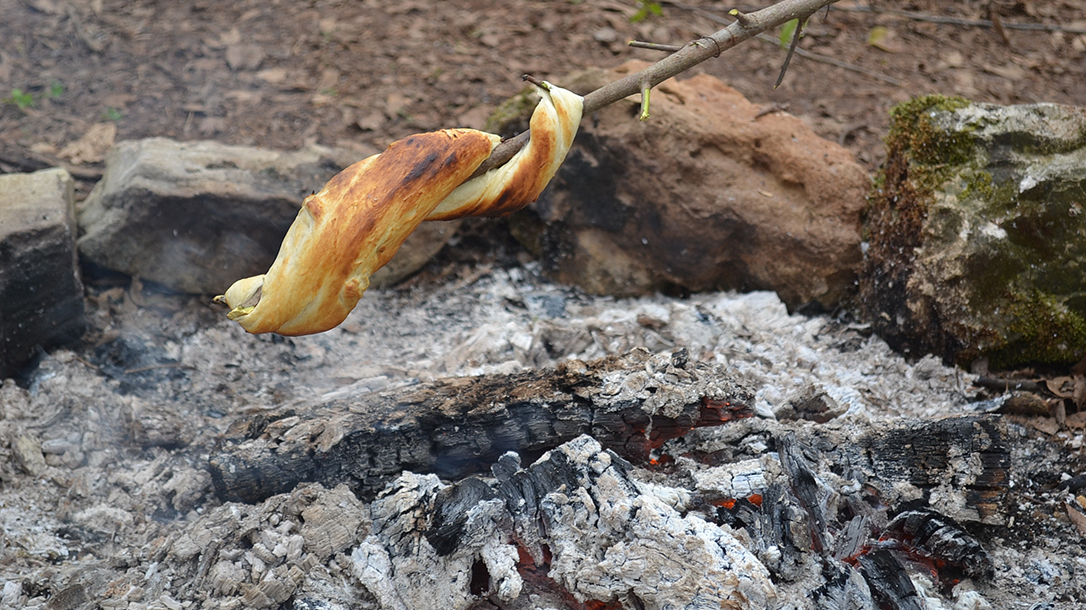 3 of 3
Photo by J. Wayne Fears
Mountain Man Food Bacon
Bacon was the meat of choice when purchasing supplies as it had a long storage life due to being salt cured. 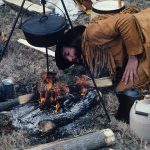 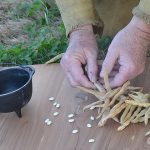 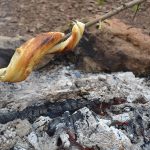 Early explorers of the American West, mostly unsupported by outside sources, were constantly faced with the dilemma of figuring out where their next meal would come from. Hard men working under hard conditions in all kinds of weather demanded a lot of food. It often had to come from the land. The new book Foods of the Early American West, written by Mike Moore, has done a great job of researching the writings of early Western explorers to record the mountain men food that kept this hardy band of men going.

To my knowledge, it is the first time that anyone has broken down the eating habits and food of the mountain men, surveyors and other explorers of the early 1800s. These are by food groups based on what the men who lived in that period wrote themselves. Foods of the Early American West a great source for mountain man reenactors and historians. It is also interesting reading for anyone who has an interest in the daily living of some of America’s most colorful characters. This also makes some insightful reading for preppers and survivalists as well.

Mountain Men Food On The Go 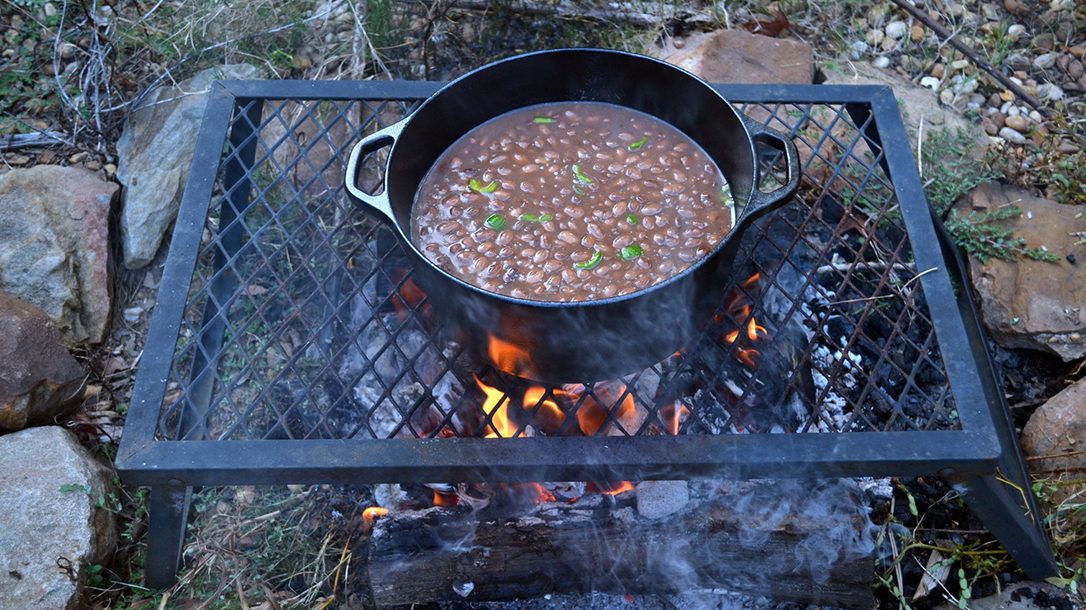 Moore starts out the book by discussing how the explorers of the West had much different eating habits than we do today. Those men of adventure put travel and their occupation as a first priority. They did not have the luxury of spending the day cooking. Most of the journals show that only two times a day did they sit down to eat. Most foods consumed at other times of the day were functional, such as jerky and water.

When available, they purchased or traded for foodstuffs at forts, trading posts, rendezvous or from remote settlers. These items were usually basics such as sugar, flour, tea, salt, bacon, dried beans and coffee. Usually these items were soon consumed and then done without. From that point on, they depended on wild game and edible wild plants. In fact, as Moore points out, the monotony of the mountain man’s diet was a common item they wrote about.

In his book, Moore does a very good job of showing just how important the purchased food provisions were to the early Western traveler. He states, “Many today do not think of the start of the trip’s food since the romance and adventure of getting their own meat, free but for the cost of lead and powder, are usually all we ever think of. Yet, a good start in this often unrecognized area gave the whole trip a greater chance of success.”

When travel was done with wagons or pack mules or a base camp was used, cooking gear might include camp kettles, both copper and cast-iron Dutch ovens, coffee pots, tin plates and cups, frying pans and perhaps a coffee mill. These cooking implements enabled the adventurers to have fried food, baked bread, coffee, boiled or fried meat and boiled vegetables.

However, when travel carried them far from a base camp or wagon support, perhaps to a remote trapline, the cooking implements were quickly reduced to a tin cup, a small fry pan, a Dutch oven, a pipkin and a small, individual iron skewer made at a blacksmith shop or a wooden stick skewer, depending upon what could be carried in saddlebags, tied to the saddle or wrapped in a blanket.

When the “West” meant the west side of the Appalachian Mountains, many long hunters and settlers only had a cast-iron pipkin. It was a small three-legged pot with a long handle on it. It allowed them to cook corn mush, boil meat and edible wild plants, boil tea, melt lead for molding rifle balls and render lard. An example of this forgotten cooking pot is on display at the Cumberland Gap National Park Museum.

In his book, Moore quotes from George Catlin’s Letters and Notes on the North American Indians: “Our culinary articles…are few and simple: consisting of three tin cups, a coffee pot, one plate, a frying pan, and a tin kettle.”

Cooking methods were kept practical and simple. These early explorers were not in the West for a culinary event. They were there to trap furs and explore new lands. Eating was just a necessity, much different than the way we think today.

Most of the meats of early Western explorers came from game animals, wild fowl, and fish. Sometimes even dogs were eaten when eating with Native Americans, and snakes, when meat was scarce. However, many of the early journals mention salt pork in the form of bacon being in the supplies bought at forts, trading posts, etc.

All of the explorers loved bacon, and it was often horded and brought out for special events. He tells of one early explorer of the Southwest, Jacob Fowler, writing in his journal, bringing out bacon hidden in his packs for six months for a special occasion on the Glenn-Fowler Expedition. One of the first surveyors of the Santa Fe Trail, George Sibley, wrote in his journal that he included 400 pounds of bacon in the supplies to feed his survey party. 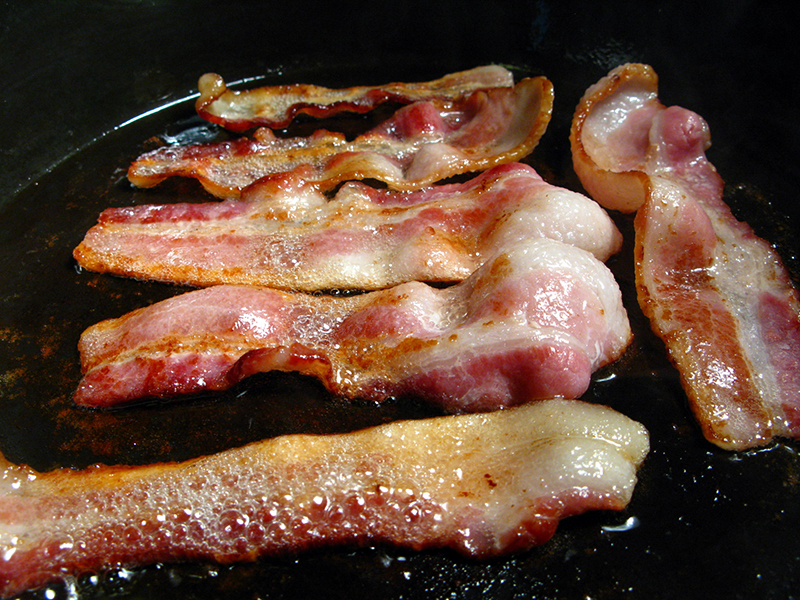 When the bacon was gone, it was up to the land to furnish meat. Buffalo was often in great supply and was well liked by the men. It was often cooked on wooden skewers over a buffalo chip fire. Trapper Osborne Russell wrote in his journal, “The flesh of the cow buffalo is considered far superior to that of domestic beef, and it is so impregnated with salt that it requires but little seasoning when cooked.” Buffalo and other large game meats were preserved by drying. This resulted in jerky, which was the trail food of the day.

George Ruxton, a British writer who lived with and wrote about the mountain men of the West, wrote in the early 1840s about the importance of meat: “‘Meat’s meat’ is a common saying in the mountains, and from the buffalo down to the rattlesnake, including every quadruped that runs, every fowl that flies, and every reptile that creeps, nothing comes amiss to the mountaineer.

“Throwing aside all the qualms and conscientious scruples of a fastidious stomach, it must be confessed that dog-meat takes a high rank in the wonderful variety of cuisine afforded to the gourmand and gourmet by the prolific mountains. Now when the bill of fare offers such tempting viands as buffalo beef, venisons, mountain mutton, turkey, grouse, wildfowl, hares, rabbits, beaver and beaver tails, etc., etc., the station assigned to ‘dog’ as No. 2 in the list can be well appreciated—No. 1 in delicacy of flavour, richness of meat, and other good qualities, being flesh of panthers, which surpasses every other, and all put together.”

The explorers of the West enjoyed whatever meat nature provided them at the moment they were hungry.

Mike Moore points out that bread was considered a rare treat in the West. Flour and cornmeal were hard to keep in good condition due to moisture. But when the early Western explorers could get bread, it was a welcome treat. Narcissa Whitman was a missionary who in 1836 was one of the first European-American women to cross the Rocky Mountains. She wrote, “Fried bread…is a luxury. Mountain bread is simply course flour and water mixed, and roasted or fried in buffalo grease. To one who has nothing but meat for a long time, this relishes very well!”

The two most common breads enjoyed when there was cornmeal or flour available were corn pone, called “hoecake,” and fry bread, called “bannock.” This was simply cornmeal and water (or flour and water) mixed to a thick paste and fried in a frypan. In the case of fry bread, the dough was twisted on a stick and baked over an open fire.

Occasionally, the mountain men got bread from the Native Americans. Jedediah Smith wrote, “They gave us food as they had consisting of a kind of mush made from acorns and pine nuts bread made of a small berry. This bread in appearance was like corn bread but in taste much sweeter.” As Moore states, everybody may not have liked the quality of the bread they were served, but they did not turn it down.

Probably the least written about foods eaten by early Western explorers are vegetables. As Moore points out in his book, “No one that I know of was a vegetarian in the West.” All of the forts tried to raise crops to supplement their diets. The less nomadic native tribes grew corn, melons, peas, beans and pumpkins. The natives of the Southwest grew onions, peppers, wheat, and beans. Several tribes had an abundance of wild plants, such as Camas root, that were edible. Also, settlements sprouting up along the fringes of the West had gardens, as did remote settlers.

From all of these sources the explorers managed, from time to time, to include vegetables in their diets. Some vegetables such as dried beans, sometimes called “leather britches beans,” were carried with them into the remote Rockies.

According to Moore, vegetables are not something we associate with the early West. But they were found and eaten there.

This article is from a previous issue of American Frontiersman. Grab your copy at OutdoorGroupStore.com. 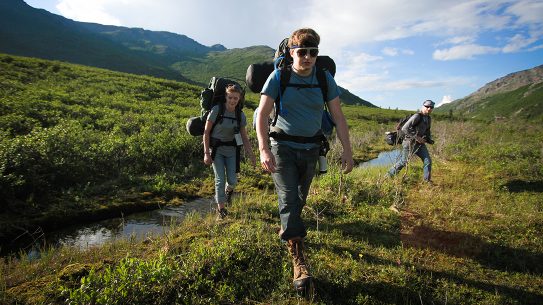 3 Reasons Why You Should Consider External Frame Packs