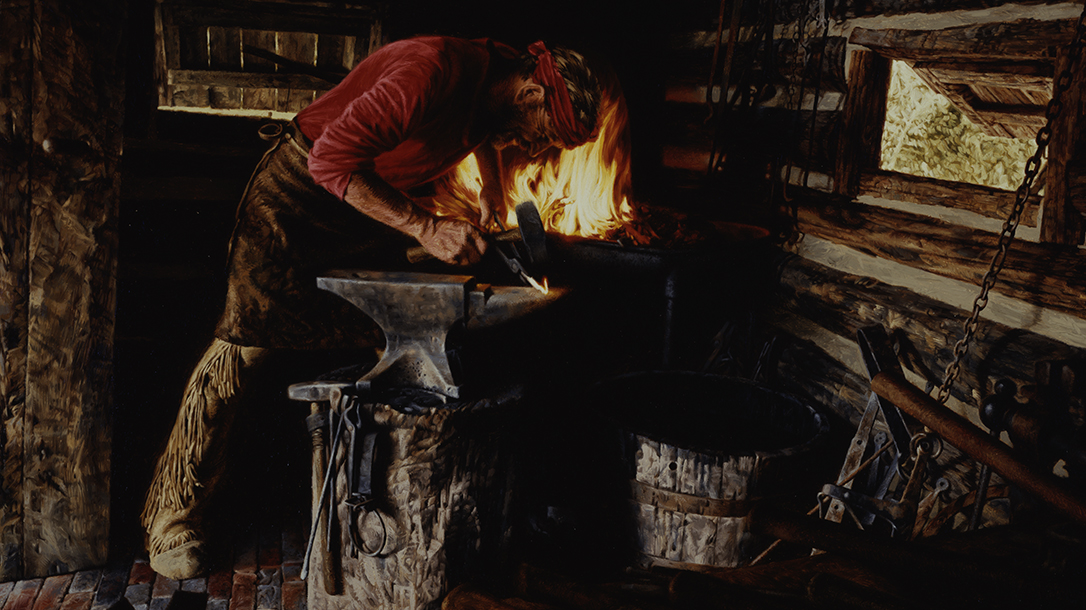 Photo by iStock
The anvil is centuries old and indispensable when it comes to crafting with metal.
Comment(s)

With an anvil, you can bend, scroll, shape, punch holes and even weld. You can make tools, latches, hangers, racks, knives, axes, tomahawks, kitchen utensils, garden tools and fireplace accessories. Need a hoof pick? Why settle for a screwdriver or the cheapo wire types that dig into your palm? How about a door knocker or mailbox bracket that has substance and style and isn’t just stamped out in Bangladesh? Or something to lift lids from hot pots?

The fact is, steel is one of the most malleable and cheapest materials. It can be fashioned into a cornucopia of practical items—completely off the grid. But you’re going to need an anvil.

Anvils have been in common use for so long that you can consider them the sine qua non of civilization. After all, if tool use is one of the defining descriptors of a human being, what can be said of the tool that makes the tools? 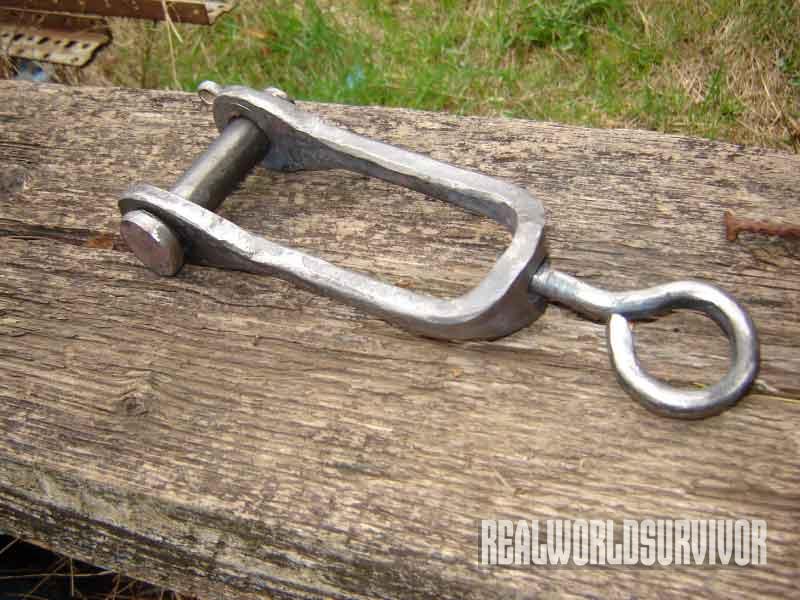 26 Steps to Correctly Forge a D-shackle

Exactly. Early man didn’t start using tools until he had a way of making them. In the Stone Age, anvils were made of stone, against which man wailed on a stone workpiece with a stone hammer. That gave way to bronze, which was in common use from 3,000 to 1,000 B.C. About 1,700 B.C., the Hittites discovered iron and got to work producing iron anvils on which superior weapons were fabricated, giving the Hittites a military advantage over neighboring civilizations. But by the 14th century B.C., metallurgy had spread to the rest of the Middle East, leveling the playing field for weaponry. From the Middle East, anvil usage spread in ever-widening concentric waves.

Early smiths typically made their own anvils, so there was really no standard shape. Anvil making didn’t become an industry until the 17th century. It started at the Mousehole Forge in Sheffield, England, where workers began to turn out the “London” pattern. That’s the shape people most associate with an anvil—a pattern so ubiquitous it has insinuated itself into popular culture. Whether you’ve seen it being dropped onto a cartoon character’s noggin, or in a Western or a period movie, it is, for most people, the quintessential anvil shape. But although the London pattern was the first and most widespread, other anvil shapes suit other uses.

Anvils today come in five basic renditions: forging, shoeing (farrier’s), sheet metal, bench and jeweler’s. The forging anvil is the manifestation you’re most likely to encounter and the most suitable for general use. Most of its 75 to 500 pounds is in its center, which tapers into a waist before flaring downward into a solid square base. On one side of the center is a solid conical appendage known as the horn, which is used to bend objects. The horn is not for hammering on. Remember that.

Welded to the top of the center is a thick, flat strip of hardened steel. This is the face, and it’s where most forging work is done. You can flatten, split, draw (elongate), cut, square, round or curl on the face. The face typically has two holes in it. The large, square hole is the hardy hole. It’s used to attach various implements known as bottom tools. Often used in conjunction with top tools, their purpose is for scrolling, rounding or hollowing a workpiece. The smaller round hole is the pritchel, which is used for punching.

The farrier’s anvil is similar to a forging anvil but with a significantly more substantial horn, and its lighter weight (100 to 150 pounds) makes it more portable. But unless you’re a professional farrier, you’re better off with a forging anvil, even if you’re shoeing your own horses.

At 5 to 50 pounds, bench anvils are too light for forging, and again, unless you’re making jewelry, you don’t need a jeweler’s anvil.

Ideally, you’d like a minimum hammer-to-anvil ratio of 50-to-1. That is, a 3-pound blacksmith’s hammer should be yoked with an anvil of at least 150 pounds. Heavier is better.

So, how do you tell how much an anvil weighs? Simple. It’s written on the side of the anvil. That is, it would be simple if it were always written in pounds. But recall, many anvils are of the London pattern, which uses the hundredweight system.

Fortunately, not all London patterns are made in London. Many are made in continental Europe or America. The weights of these will be written in pounds or kilograms.

Anvils are made from three materials: forged steel, cast steel or cast iron. You can eliminate cast iron. Do not be tempted by the low prices of cast-iron anvils. They are sometimes called anvil-shaped objects or some such thing, but the label is always a euphemism for junk. That also applies to cast-steel anvils if they’re made from poor-quality steel, which is itself a euphemism for being made in China.

What you want is cast steel or, better yet, forged steel. Either way, the anvil should have a hardened steel face. The steel is not only durable but also returns energy rather than absorbing it, making for enhanced efficiency.

Ready To Buy One?

Let’s say you’re looking at an anvil advertised in an ad, by the side of the road or at a yard sale. What makes a specimen purchase-worthy? First, there’s the overall condition. A few small chips, dents or minor cracks aren’t a big deal. You can easily grind these out. Big chunks missing, serious cracks or a swaybacked face? Move on to the next one. As for the face, if you must use a straightedge to tell if it has any dip, it’s nothing to get worked up about. But if the declivity is so deep as to be obvious to the eye, that anvil’s a goner. Keep looking. 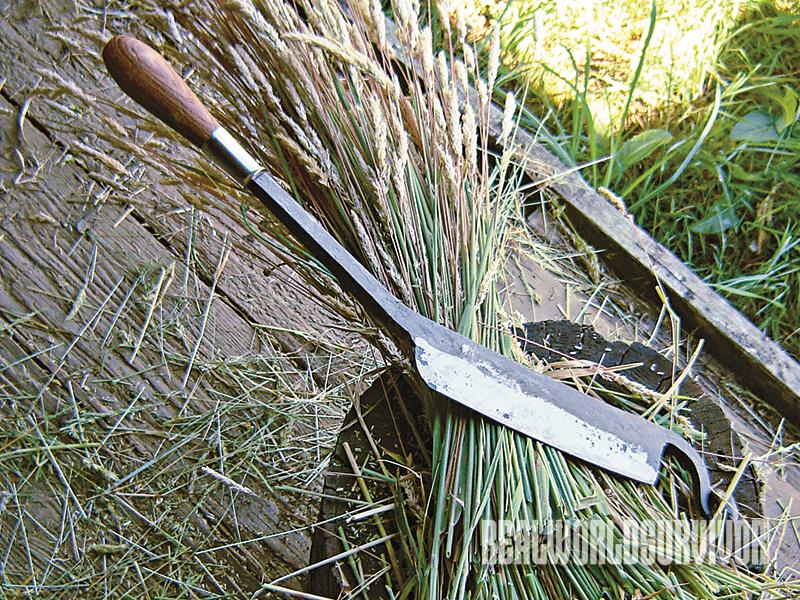 Listen for a definite ring when the anvil is struck lightly. As James Cran put it in his inestimable classic Machine Blacksmithing, “The quality of an anvil can generally be judged by its ‘ring,’ a good anvil giving out a sharp, clear sound when struck with a hammer; if soft or not free from flaws, the sound will be dull. A good anvil mounted on a block in such a manner that it gives out its full volume of sound is easier to work upon than one where the ring is deadened.”

The ring is an audible indication of how lively the anvil is. For every action (hammer blow), there is a reaction (hammer rebound). This is more pronounced on a good anvil. Here’s how you test it for this sort of energy-reaction efficiency.

Hold a hammer about 8 to 10 inches above the anvil’s face. Hold the tip of the handle between your thumb and forefinger, forming a sort of pivot. Then, hold the business end directly over the face with your other hand. Now, holding the pivot steady, simply drop the hammer. It should bounce back up by a minimum of one-third the distance; for 8 inches, that’s nearly 3 inches. More is even better. You can also test the anvil using a steel ball bearing. Simply drop the ball from 10 inches. It should bounce back up to 90 percent of the distance. If its rebound covers less than half the downward distance, you might look at that anvil with a jaundiced eye.

Prices for anvils obviously depend on condition but also the geographic area. For an eminently useable used anvil, expect to pay $2 to $4 per pound. But many people have found anvils that cost far less. Flea markets and yard sales are good places to look. You can also sidle up to farmers and inquire if they have an older anvil they’d like taken off their hands. You’d be surprised.

Another place to look for a good deal on a used anvil is at a blacksmith’s meeting. Yes, there are such things. Almost every state has a blacksmith’s association, and they have regular meetings. They’re great places to pick up used tools, anvils and valuable information about metal working.

If you’re strapped for cash, it’s possible to get along with an anvil without a horn. You can find these frequently, and they will command a much lower price than a whole anvil. For a beginner, they are more than adequate. In fact, Japanese blacksmiths have always used hornless anvils, and their metal work is second to none.

You must learn a few things about setting your anvil or mounting it in position for work. The two main considerations are a solid base and a comfortable working height.

The most common base for an anvil is wood. This can be a large wooden block (hard to find these days) or a good-sized section of a log (referred to as a “round” and fairly easy to obtain). It should be at least 24 inches in diameter, and its height should be whatever will bring the face of the anvil to wrist level when your arm is hanging by your side. It’s important that you don’t have to bend over to work on the anvil. While standing with your back straight, your arm should be fully extended horizontally when the hammer strikes the workpiece.

If your round is of insufficient length, you can simply create a cement block to go under it. If the round is too high, sink part of it. In The New Edge of the Anvil, Jack Andrews says, “Sink the log into the ground a foot or more. This anchors it securely. Make sure the anvil is held firmly to the stand.”

You can attach the anvil to the base with heavy staples or chain. Make sure the hardware is secure. The last thing you want is an anvil wandering off its stand and onto your foot.

Anvils are pretty maintenance free, so don’t fret about surface oxidation. It’s mainly a cosmetic flaw and won’t hurt the anvil. You can spiff them up with some steel wool, light sandpaper or a steel brush. Surface imperfections can be ground out with an angle iron or sander. One caveat, however: You can sorely damage an anvil by hammering on it without a workpiece. Dropping a hammer lightly from 8 inches to test its rebound is one thing. Wailing on it with a 3-pound hammer is downright injurious. Don’t do it. Apart from that, there’s not a lot you need do to maintain your anvil.

So, get hammering. Books, videos and local classes can get you started. Every state has a blacksmith’s association. Contact yours. Go to their meetings. You’ll also find that when it comes to preparedness, most blacksmiths are of a like mind with you. Hey, they make their own tools. 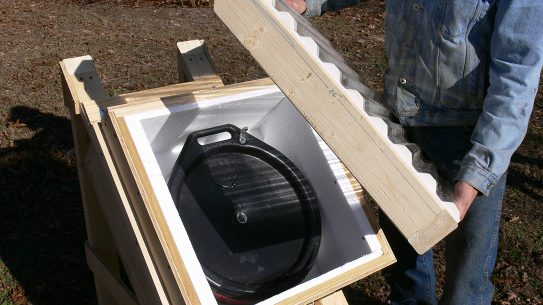 There is always use for hot water, and there are a number of designs...