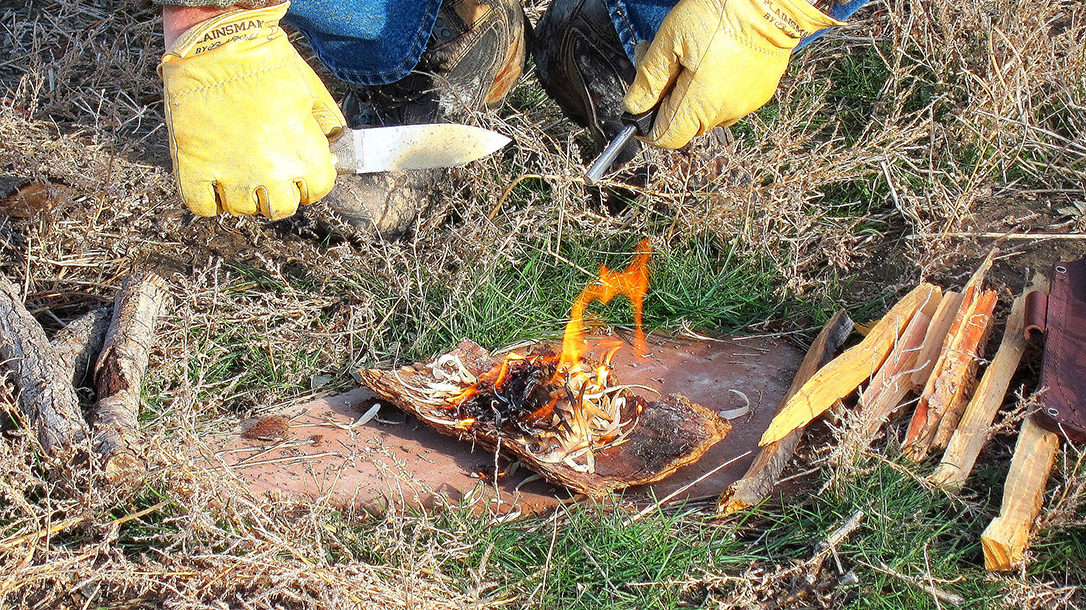 Photo by Denis Prisbrey
A good bushcraft knife can mean all the difference in the field, as its list of abilities is lengthy.
Comment(s)

Horace Kephart is a familiar name to hardcore bushcrafters today and, along with overlapping contemporary George Washington Sears (aka “Nessmuk”), was one of the leading outdoor writers of his time. Kephart’s influence is still strong. His experiences gained from many years spent living alone and genuinely roughing it are still found in print. They are widely quoted and considered almost Bible-esque among those who hike light, camp simple, or practice the basics off the grid.

Considered the father of the Great Smoky Mountains National Park and a founding member of the bushcraft movement (although the term hadn’t been coined yet), Kephart wrote extensively for Field & Stream magazine. He later published a collection of those articles in his first book, Camping and Woodcraft, in 1906, and followed that with Camp Cookery in 1910 and Sporting Firearms in 1912. He wrote other articles and books. His most important historical work was a study of Appalachian culture and lifestyles in 1913 titled Our Southern Highlanders.

Kephart was a master of living on his own with minimal equipment, far from civilization, and passing on his knowledge by writing about what worked in the wilderness, what did not and how to use the most basic tools and shelter to survive and thrive.

His primary tools along the trail and in temporary camps were a fixed-blade knife, a small tomahawk (or hatchet, as we call it today) with a 12-ounce head and a foot-long handle, and a jackknife in his pocket with one blade at least three inches long. The fixed-blade belt knife handled most larger cutting needs, from wood to cooking. The hatchet was portable enough to carry in a pack. It was big enough to process wood for shelter and fire. The jackknife, with its smaller blades, took care of smaller cutting chores and whittling. Far from base camp, those tools sufficed to keep him comfortable and happy during his outings.

The fixed-blade knife was so essential to his lifestyle that he had one made to a pattern he considered ideal. He described it in the first edition of Camping and Woodcraft: “Its blade and handle are each 4¼ inches long, the blade being 1 inch wide, 1/8-inch thick on the back, broad pointed, and continued through the handle as a hasp and riveted to it.

“The handle of this knife is of oval cross-section, long enough to give a good grip for the whole hand, with no sharp edges to blister one’s hand. It has a ¼-inch knob behind the cutting edge as a guard, but there is no guard on the back, for it would be useless and in the way.

“This knife weighs only 4 ounces. It was made by a country blacksmith, and is one of the homeliest things I ever saw; but it has outlived in my affections the score of other knives that I have used in competition with it, and has done more work than all of them put together.”

Kephart so loved and promoted his design that the Colclesser Brothers firm in Pennsylvania offered it commercially in 4- and 5-inch blade lengths for of $1.75 and $2, respectively, including a simple two-piece slotted leather belt sheath. And other companies sold similar patterns for several years.

It’s difficult to imagine in today’s blade world, in which thousands of knife designs and models are available, but Kephart’s humble little Blacksmith Special was such a viable working tool that his name is forever attached to it, and it’s still being made. That says quite a bit in a market where bigger is better and flash gets the cash.

In its purest form, the Kephart knife offered straight utility and nothing but utility. The 4.25-inch blade was more than adequate for carving wood, skinning deer and cooking chores in cabin, tent or temporary lean-to settings without being too long or awkward to use in finer cutting applications. The thin, full, flat grind on a 0.13-inch blade allows a fine (as in sharp) cutting edge. The spear-point profile is excellent for removing the hide from a deer or elk without puncturing meat or other tissue underneath with an overly pointy or improperly swept tip, and it offers plenty of belly for processing game in the field and the camp kitchen.

The Kephart knife’s tip is not fragile, and the cutting edge extends back to the wooden handle slabs (no wasted blade space with unnecessary choils). The small guard resists a forefinger’s efforts to slide forward onto that cutting edge. The full tang adds strength. The oval cross-section of the handle is comfortable in hand, with no hotspots to scrape or wear blisters on skin with extended use. And at 4 ounces, the knife was as big as it needed to be, but no bigger, and light enough to carry all day and half the night through his beloved Appalachian stomping grounds.

It’s probably important to note that in Kephart’s era, some of the more modern expectations popular in outdoor knife selections nowadays, such as chopping and batoning, were largely unheard of. Working knives were expected to cut things that needed to be cut, not chop or split wood. Axes were used for that where necessary, and that’s why Kephart always had one with him on the trail. He had a low opinion of big knives for wilderness carry.

The Kephart pattern is still going strong in a wide range of materials, prices and individual interpretations that vary from near duplicates to “loosely inspired by” versions that veer off on blade profile or grind. The steel used by Kephart’s blacksmith is unknown, and the pattern used now is much improved, even in the more basic offerings, with more high-performance steels and handle materials available, boosting the original pattern far beyond what Kephart had to work with.

Between the budget model and the full-blown custom maker, there’s a Kephart blade that should meet your needs if you’re considering one. More than 100 years later, the Kephart knife remains a classic simply because it does what it does so well. Let’s take a quick look at six that stick closest to the original in form and concept.

Battle Horse Knives carries several bushcraft-style blades, and the 7-ounce, flat-ground Bushcrafter Flat model—with its 4-inch, satin-finished, 0.15-inch-thick blade made of 0-1 steel and 4.37-inch handle—is the closest it comes to Kephart’s preference, with a different approach in a finger groove forming a minimal guard.

The Bushcrafter can be ordered in Scandi, saber and flat grinds and with various Micarta handle options. The polished brown “natural” scales shown are classy and extremely comfortable in a medium-sized hand. They produce zero hotspots in use. Those scales are attached with flush-ground steel/brass screws that are also epoxied on (unless you order optional removable scales) and fitted with a wrist lanyard hole. The spine is also sharpened for ferrocerium rod use, and the knife comes with a brown leather sheath. (battlehorseknives.com)

The knife’s grind lines are relatively unpolished but consistent and even. The handle scales are well fitted to the outlines of the tang, and the pins sit flush with no hotspots. The 1075 steel won’t hold an edge quite as long as the more common 1095 (or the higher-priced exotics), but it’ll sharpen up easier. And the Condor Kephart comes with a surprisingly sturdy brown leather sheath. (condortk.com)

John Kiedaisch is a one-man, do-it-all blade shop in Illinois, who believes in keeping total control under his own roof—from bar stock profiling, grinding, heat-treating and handling—with help from a brother on leather pouch-style sheaths. 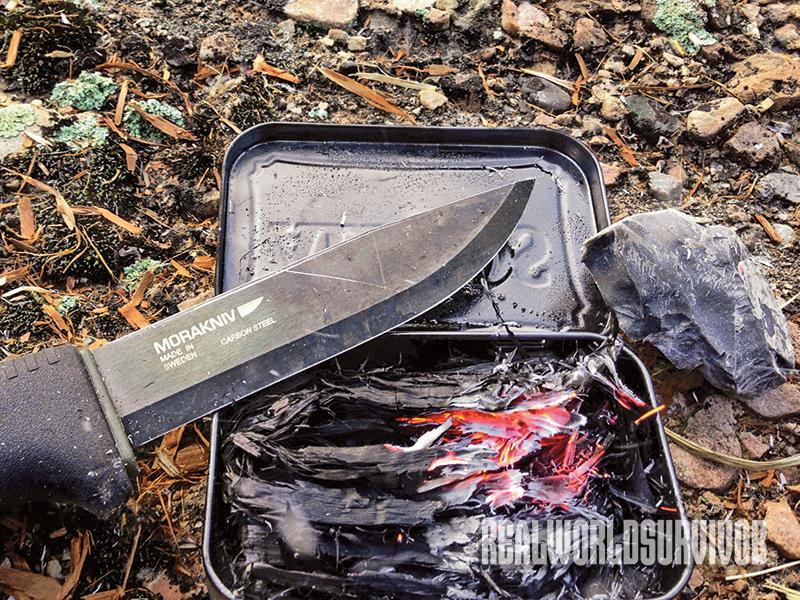 Back to the Basics: 8 Bushcraft Skills You Should Know

Kiedaisch also likes 0-1 tool steel, a tough alloy with superior edge retention that still sharpens without much drama, and his Kephart is a beefy rendition with a 0.13-inch-thick, 4.25-inch-long, satin-polished, spear-point blade ahead of a 4.5-inch broom-style handle made of curly maple and attached by three small brass pins. At 5.5 ounces and flame-charred for a slightly burnt handle look, this knife should appeal to those with larger hands or for gloved use, and it adds a nice stylistic flair to the basic Kephart pattern. (jkhandmadeknives.com)

LT Wright Handcrafted Knives in Ohio is a larger shop that offers several outdoor designs, including its Kephart, which is catalogued as the Genesis model. A hefty 7.25-ounce knife with a 4.25-inch blade and a 9-inch overall length, this spear-point model features a subdued gray finish on the 0.13-inch-thick A2 steel and a choice of Micarta or Desert Ironwood handle scales. The Genesis comes in two blade grinds, Scandi or flat. The sample shows thick, matte-finished (unpolished) Micarta in a hand-filling handle along with the flat grind of the original Kephart. Those scales are attached with three brass/steel fisheye screws ground flush. These screws are also epoxied on so they won’t loosen under hard use. A wrist lanyard hole brings up the rear. One other thing to note is the sharply squared spine, which is ideal for sparking a ferrocerium rod. (ltwrightknives.com)

Lucas Bullington is a one-man operation on a working farm in Alabama, and his Kephart model is the closest example of the original Kephart pattern among the makers included in this overview. Putting his personal outdoors experience into each custom model, Bullington uses 0-1 tool steel for most of his handmade knives and controls everything from forging, grinding, heat-treating and the final oxidized blade patina to resist corrosion. Although the handle materials can vary, the sample shown is oil-finished walnut attached with three brass pins.

Deceptively plain to look at, the Lucas Forge Kephart is comfortable in your hand, with a 4.5-inch blade. The sample sent, with a leather pouch-style sheath—also handmade, signed and dated by Lucas—weighs 0.75 ounce more than the original Kephart’s 4-ounce weight, and comes sharp enough to hit the trail. (customhuntingknives.org)

Forging and grinding by hand, and using time-proven 1095 high-carbon steel, Matt Lesniewski sticks with natural materials for handles and sheaths, with more interest in function than fancy. His blades are forged one at a time and differentially tempered, with a hard edge and softer spine to resist impacts and abuse.

The ML Kephart Field Knife in standard form is a subdued 5.25-ounce package with dark, 0.13-inch-thick, 8.43-inch-long blade ahead of a 4.25-inch handle. On the sample shown, the smooth, oil-finished black walnut scales are retained with three small steel pins, and the blade thickness varies in an unusual spine-to-edge full convex grind. There’s only a fine micro bevel on the cutting edge here, and the edge runs all the way back to the handle.

It comes with a hand-stitched brown pouch sheath that’s also made, dated and signed by Lesniewski. (ml-knives.com) 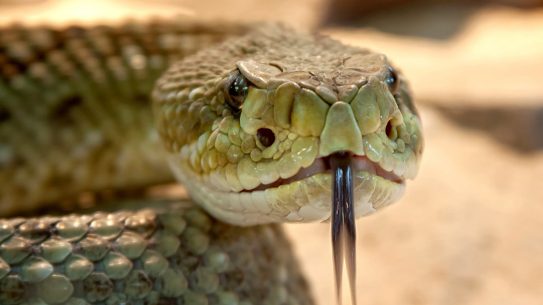 What the Sutcliffes didn’t know is that snakes can still bite and inject venom...