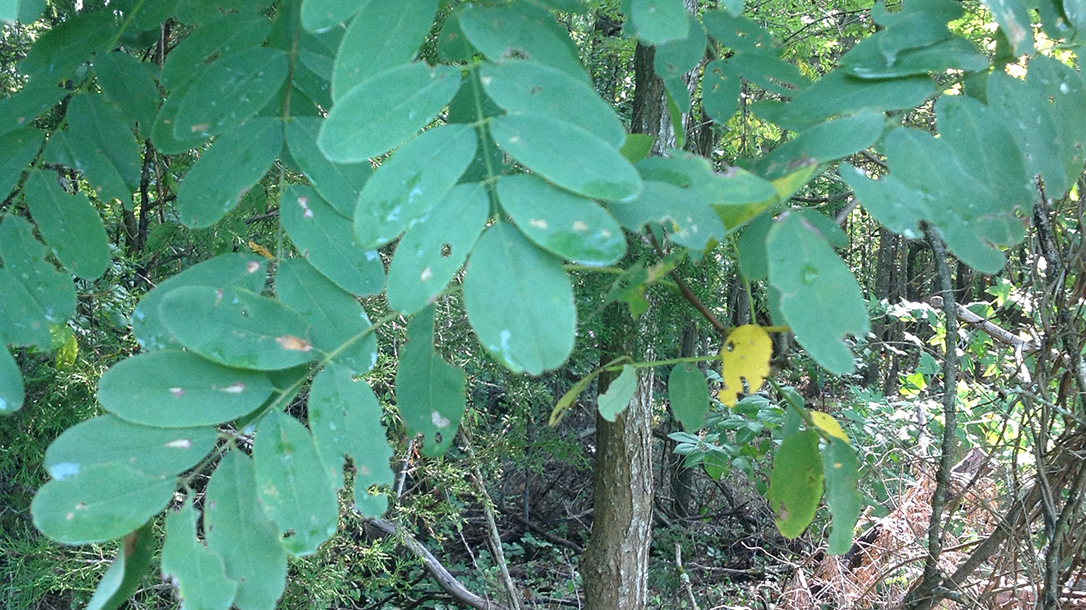 Photo by Thomas Ray
Black locust makes a durable bow and is one of the hottest fire woods.
Comment(s)

Native plants have many uses in the manufacturing of primitive implements, weapons and other goods. We are always fascinated when archaeologists unearth stone tools used by people thousands of years ago, but equally as exciting are the many native plants indigenous people used and how they used them. Libraries have been written on the use of lifesaving plants as food and medicine. Writing, reading or using such an article also carries with it a certain amount of liability and responsibility. Instead, our primary focus here will be on alternative uses of these plants to fulfill human wants and needs.

Pawpaw (Asimina triloba) is an understory tree of eastern North America that grows in patches and spreads by means of underground roots, hence the term “pawpaw patch.” One of its common names perfectly describes the taste of its fruit—the custard apple. The pawpaw produces the largest indigenous edible fruit in North America. Pawpaw wood is very light in weight and makes excellent bow- and hand-drill components. Its bark can be stripped from young trees and used immediately as a first-class binding material for hafting tools and tying shelter components together. 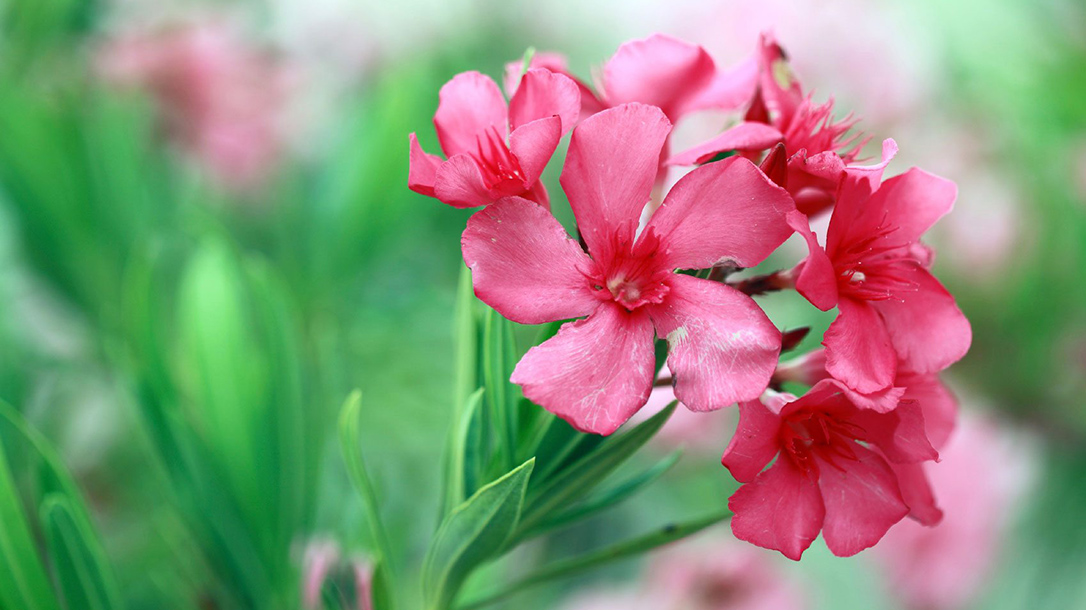 Deadly Plants: 13 Plants That Can Literally Kill You

The strong inner bark of the pawpaw was used by native people for making ropes, fishing nets and mats, and fish stringers. A pesticide can be made from the leaves, bark and twigs of the plant. It is suspected that the large, dark, shiny seeds inside the pawpaw fruit are also insecticidal, so they should not be eaten. The seeds were sometimes carried in times past as pocket charms, similar to the way some people carry buckeyes from the buckeye tree for good luck.

The pine (genus Pinus) is a useful tree that grows almost everywhere in North America. It can be used for food, but it has many more uses beyond just subsistence. In hafting tools, pine pitch is very valuable. The haft is notched and the item to be hafted—bone, stone or what have you—is fitted into it. The pitch serves as more of a filler than a glue.

When most pines die, they produce fatwood. The sap of the pine contains terpene, a volatile hydrocarbon. The terpene evaporates and the resin left behind concentrates in the dead heartwood, creating what is called lighter wood or “fat lighter.” It burns like kerosene, even when wet and makes a supreme fire-starter. The best-quality fat lighter has such a concentration of terpene resin that it appears translucent when held up to light. Under wet conditions, it is worth its weight in gold when a warm fire is needed. Of course, this material can be used to produce pine pitch and pine tar, a very versatile substance with many uses from medicine to waterproofing.

Dried pine limbs in the right stage of decay, especially the Loblolly variety, make excellent bow-drill hearths and spindles. Dried pine twigs and needles, being rich in terpene, make excellent fire-starting materials. Pine splits easily and makes fine kindling. It burns fast and hot, but with a lot of soot. It is not fit to cook over because of its resin. Green pine boughs on top of a fire create copious amounts of white smoke, making a very effective signal fire.

While pine has many uses, dogbane (Apocynum cannabinum) does one thing really well: It can be used to make superior cordage. It grows all over the United States and into southern Canada. The plant itself is poisonous to animals and can cause cardiac arrest. In the fall, the poisonous compounds drain into the roots, making it safe to harvest the dried plant stalks. The bark is stripped from the stalks. Bundles of stripped bark can be rubbed between the hands to remove the outer bark. The fibrous inner bark left behind resembles flax, is rot resistant and can be turned into cordage. It was used by native people to make nets, bowstrings, fishing lines, strong ropes and for many other uses. 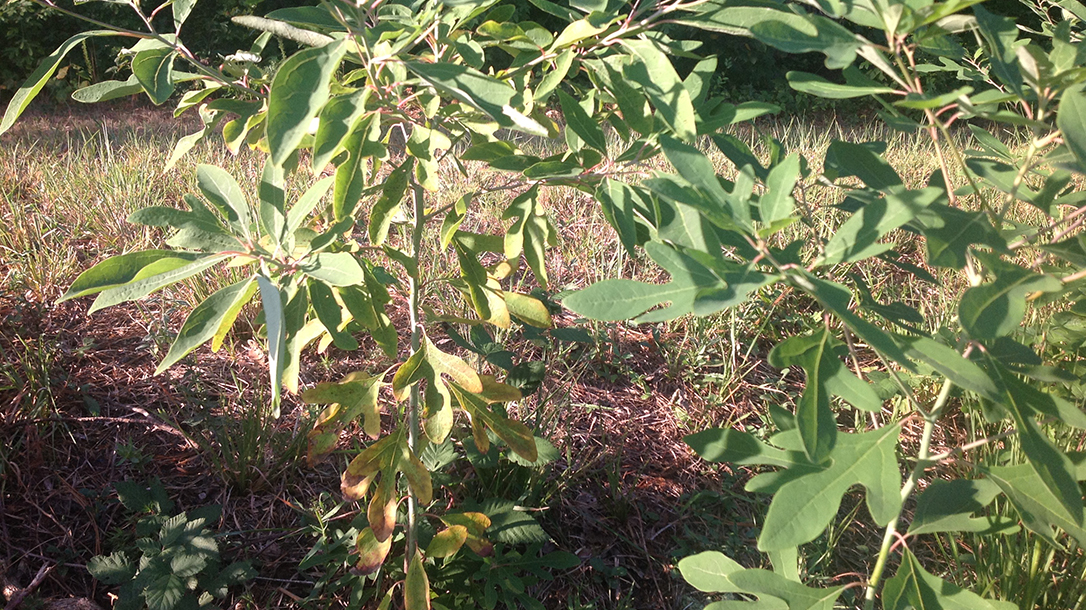 Sassafras (Sassafras albidum) is the only species of sassafras native to eastern North America. It is a beautifully unique tree capable of having three distinct leaf shapes with one, two or three lobes. Dried sassafras has beautiful white wood tinged with light orange. The wood is full of oils, making it very flammable. Sassafras is best known for its use in teas, but its leaves are used as a thickening agent in cooking. The wood is tough and springy. It is easily split, and excellent bows, atlatls, netting needles and spear shafts can be made from it. Sassafras wood is very beautiful and quickly oxidizes to a golden amber color. 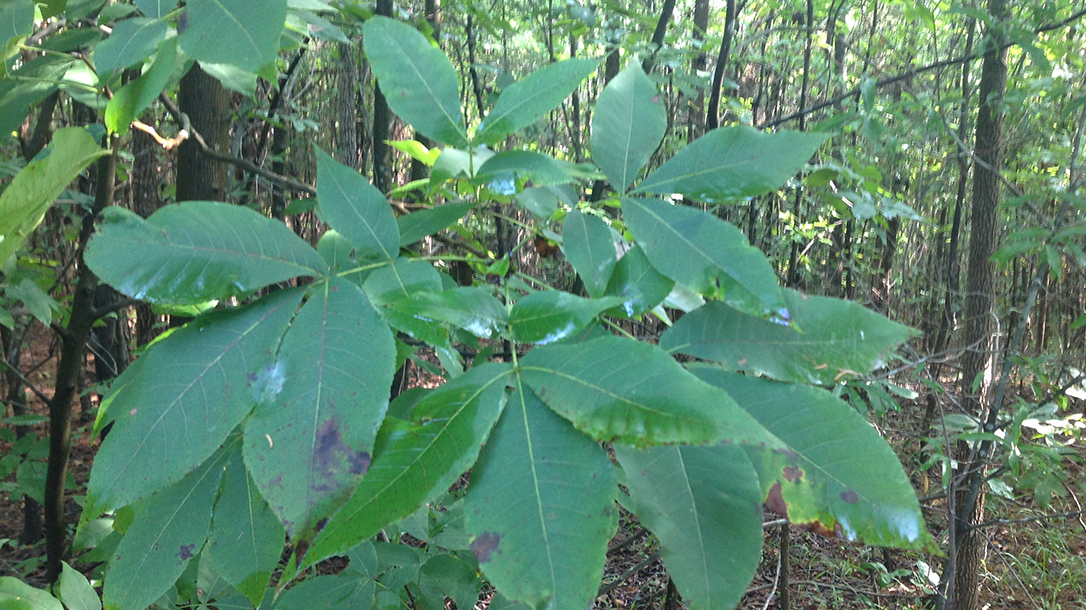 Hickory (genus Carya), along with the pecan, is a member of the walnut family. Whereas there is only one species of sassafras native to North America, there are about a dozen hickories. Hickory is known for its edible nuts and beautiful wood. Hickory is very dense and hard. Pignut hickory is an incredibly heavy and tough variety. A better wood for a club could not be found! In fact, the Catawbas made their bows and rabbit sticks from hickory. Although it is extremely dense, hickory is a great shock absorber, making it a great wood for things like ax handles. Hickory, along with ash and chestnut oak, are my favorite fire woods for cooking. Hickory is also a great wood for smoking meat. The Cherokee make a yellow dye from hickory hulls. The green hulls can also be used to make a fish poison. 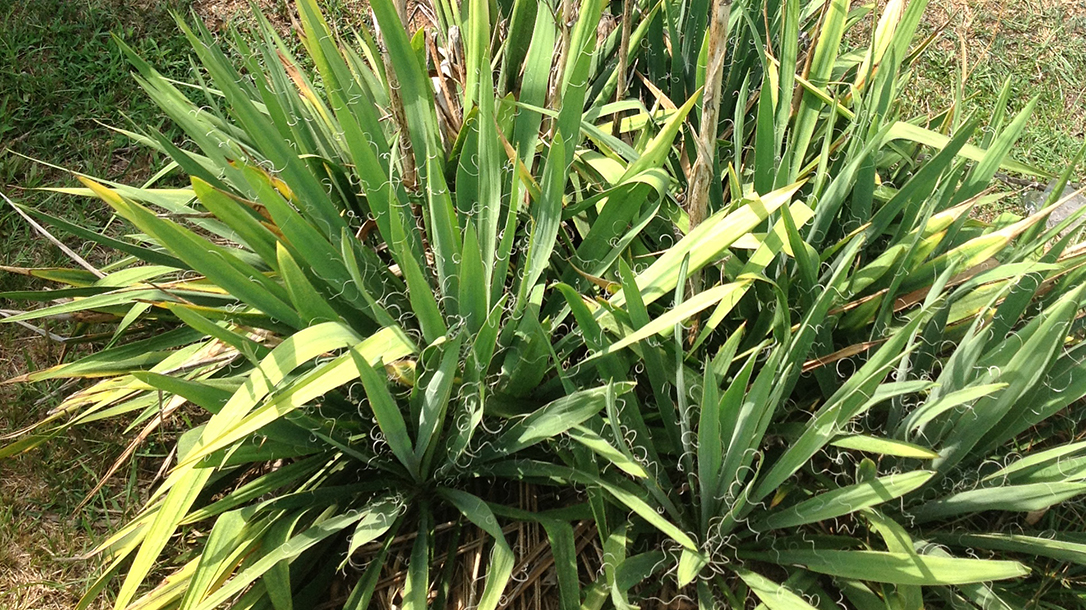 Yucca (Asparagaceae family) has sword-shaped evergreen leaves that are tough and sharp. The flower spike is most useful as a drill for fire-making when it can be obtained without yucca worms (a part of its complex life cycle) inside. The leaves can be tied together and used as-is for cordage, or retted in water to release its sisal-like fibers, which can be turned into strong cordage. Yucca leaves can also be plaited into expedient sandals and other items. Its root contains saponin and makes a weak form of soap. Saponins have also been used historically as a fish poison. 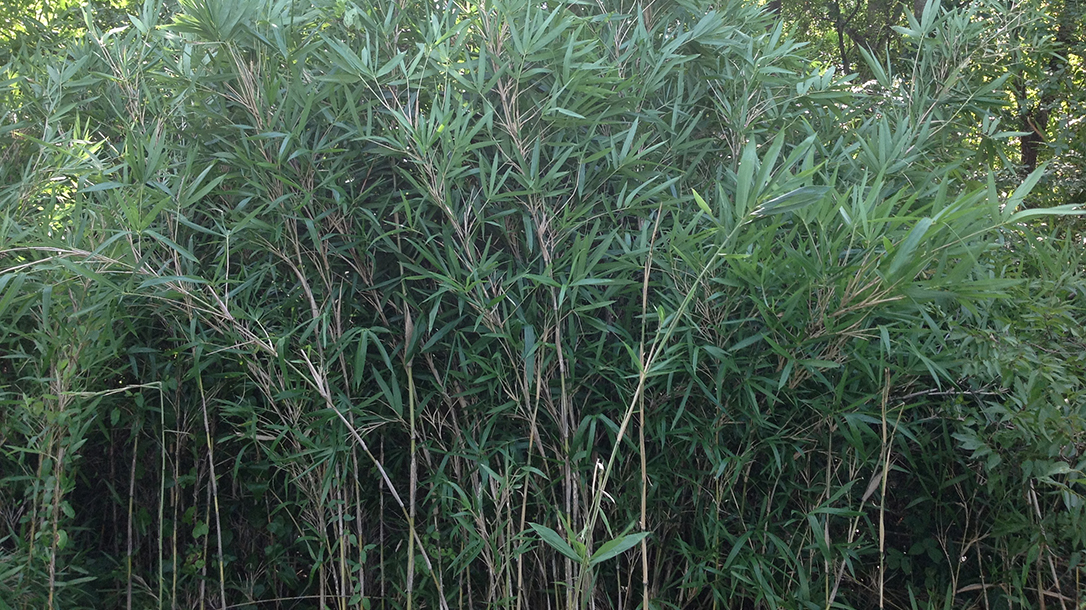 River cane (genus Arundinaria) is a native bamboo of North America. There are two species: tecta, or arrow cane, and gigantea, giant river cane. It spreads by underground rhizomes and can grow in huge stands along rivers called canebreaks. River cane is used by the Cherokee and other Southeastern native people to make blowguns and fish spears. It can be made into vial containers, atlatl darts, arrows, knives, flutes, whistles and other items. Beautiful baskets can be made from natural and dyed cane splints. The cane is rich in oil, which helps implements made from it to resist cracking. It also makes excellent kindling. 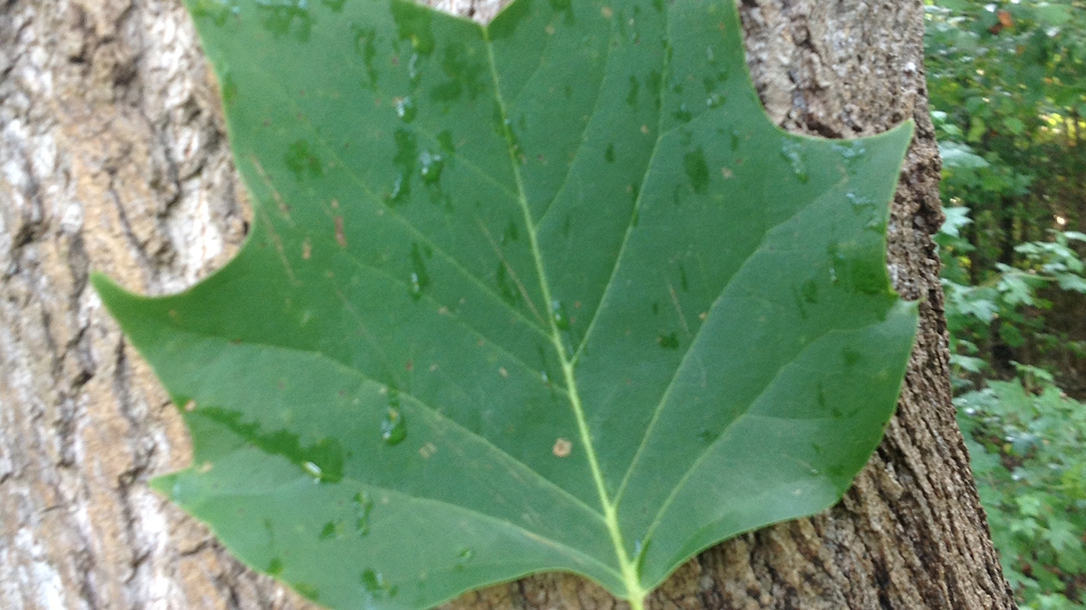 Tulip poplar (Liriodendron tulipifera) is the tallest eastern hardwood tree, growing to more than 160 feet. It produces beautiful, easily worked wood. The heartwood is normally a pale green with streaks of purple while the sapwood is a creamy white. It was prized by the early settlers for making dough bowls and other kitchen implements. Tulip poplar makes a fine kindling and firewood, producing a really hot fire for boiling or for starting other hardwoods. It does pop and throw cinders, especially if excess moisture is present in the wood. It is easily wrought, so that many necessities of camp and cabin life, such as tables and benches, can be made from it. The Catawba used its bark to cover their houses. The bark can also be used to make first-class berry buckets, backpacks and baskets. Even today, it is a great source for wide, knot-free boards.

Black locust (Robinia pseudoacacia) was prized by the Cherokee for making bows, and rightfully so; its yellow heartwood is very tough and forgiving for the bowyer and makes an excellent hunting bow. It is rot resistant and is used to make fence posts and rails. Black locust is one of the hottest fire woods, slow-burning with a blue flame. In any application where a tough wood is needed, black locust really shines.

Cattail (Typha) is found in wetlands all over the United States. It is one of the most useful food plants, being almost entirely edible (assuming where it is growing is a clean environment), but it is also a very useful plant for other purposes. Its leaves can be used as thatch and to make shoes, mats and other items. Small floats and watercraft can be made from bundles of Cattails. When dry, the brown seed heads of cattail make an excellent coal extender when making hand- and bow-drill fires. This material is similar to kapok and has been used as a substitute in life vests. It is also an excellent insulator in shoes and other items. 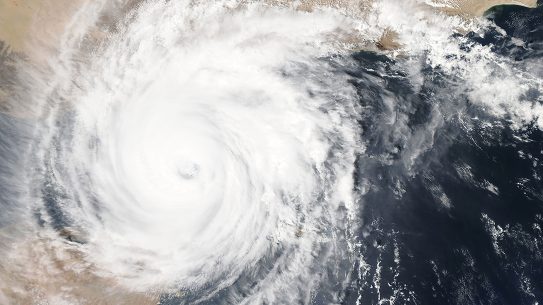 As Hurricane Florence Draws Near, How Is Your Water Supply?

Making sure you have clean and available water during an emergency, especially during a...