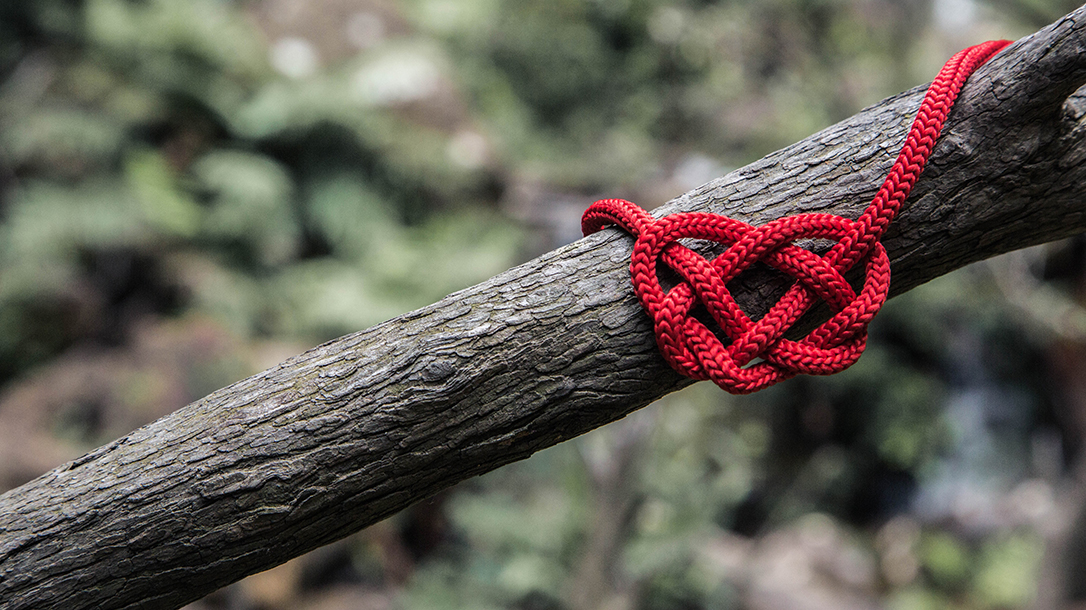 Photo by Will Oey
Comment(s)

Clifford W. Ashley was an artist, author, and sailor, born in New Bedford, Mass., in 1881. He spent six weeks aboard a whaling ship in order to do research for an article about whaling for Harper’s Monthly magazine in 1904. He later published a series of instructional articles “The Sailor and 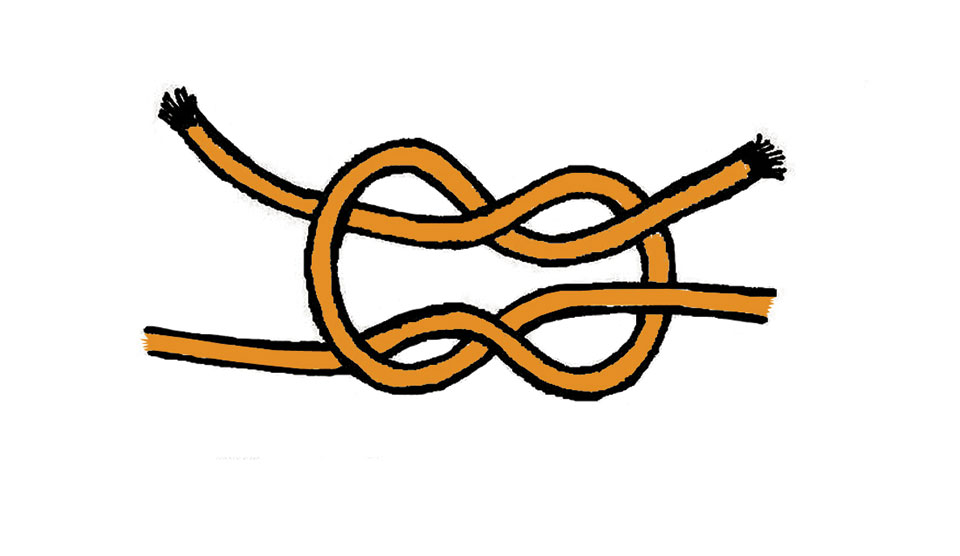 How To Tie Lumberjacking Knots

His Knots.” This proved to be the prelude to his later opus, a magnificent tome that made him famous in 1944: The Ashley Book of Knots. In it, Ashley warns: “A knot is either exactly right or it is hopelessly wrong. Make only one change and either an entirely different knot is made or no

knot at all may result.” The book contains over 3,800 knots categorized by type, including knot usage and the instructions for tying them. Nearly 75 years later, it remains the most comprehensive book on knots in print, and contains these survival knots.

Unless you’re a professional sailor or have the ambitions of Clifford W. Ashley to collect and categorize every possible knot in the world (as well

as invent a few of his own), you won’t have a justifiable need to learn to tie 99 percent of the 3,800 knots known. However, having a good handle on a reliable core of knots, knowing their capabilities, limits, applications, and instructions will serve you well in any survival situation.

A very popular knot, the square not can be used to tie packages and bandages, to join together paracord, and to connect shorter ropes into one. 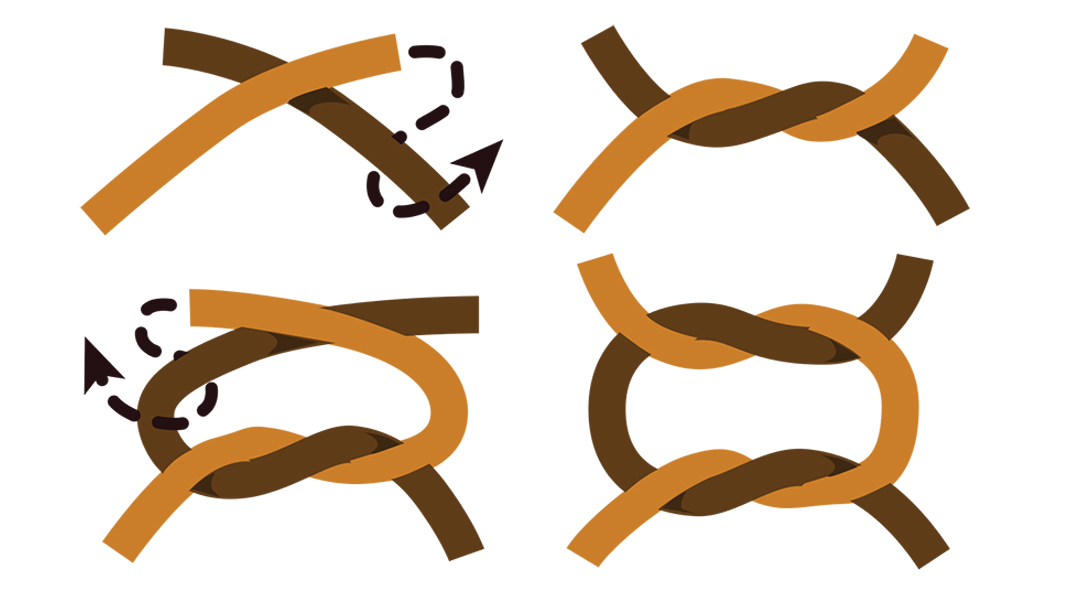 To tie the square knot, hold one rope end in one hand and the other rope end in your other hand. Twist the left hand rope over and under the right hand rope and pull it tight. Then twist the right hand rope over and under the left hand rope and pull it tight. The ends of the rope should both be on the same side of the knot if you tied it correctly. If they are on opposite sides of the knot you have tied a Granny Knot which will come undone.

A bowline creates a loop at the end of the rope that won’t shrink, slip, or expand. It is good for mountain climbers, for securing an animal snare, or for hauling up a load. 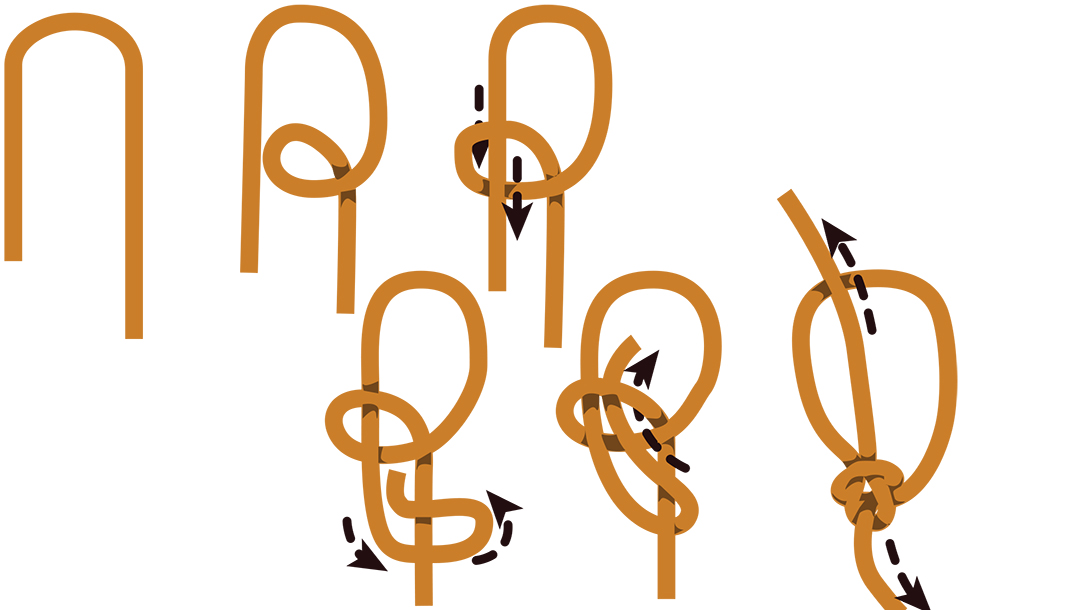 The clove hitch can be used to secure a line to a tree or post quickly (but it can slip over time), but it can also be used in shelter building. 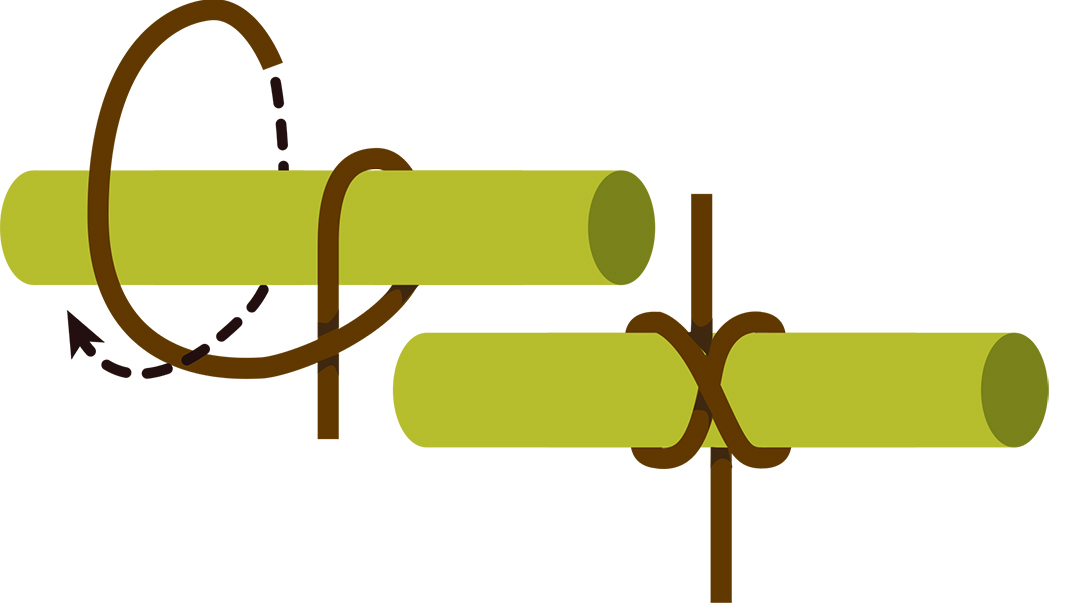 This is not only a stopper knot used to prevent fraying or to prevent the end passing through a hole but it is a prerequisite knot to learn in order to tie some more difficult knots. 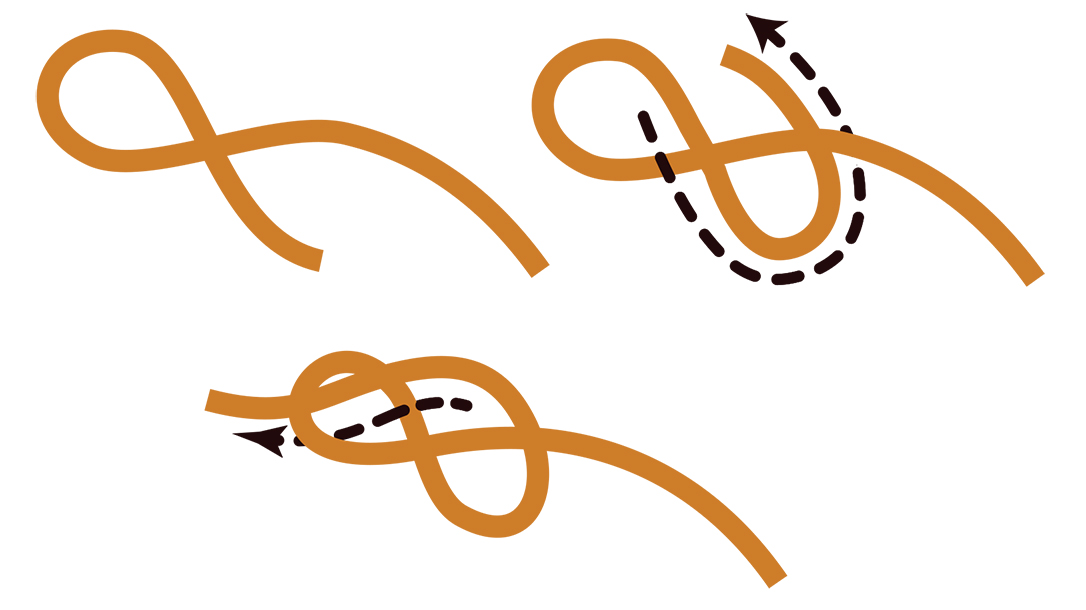 This knot is useful for joining together to lengths of rope with different thicknesses or diameters. 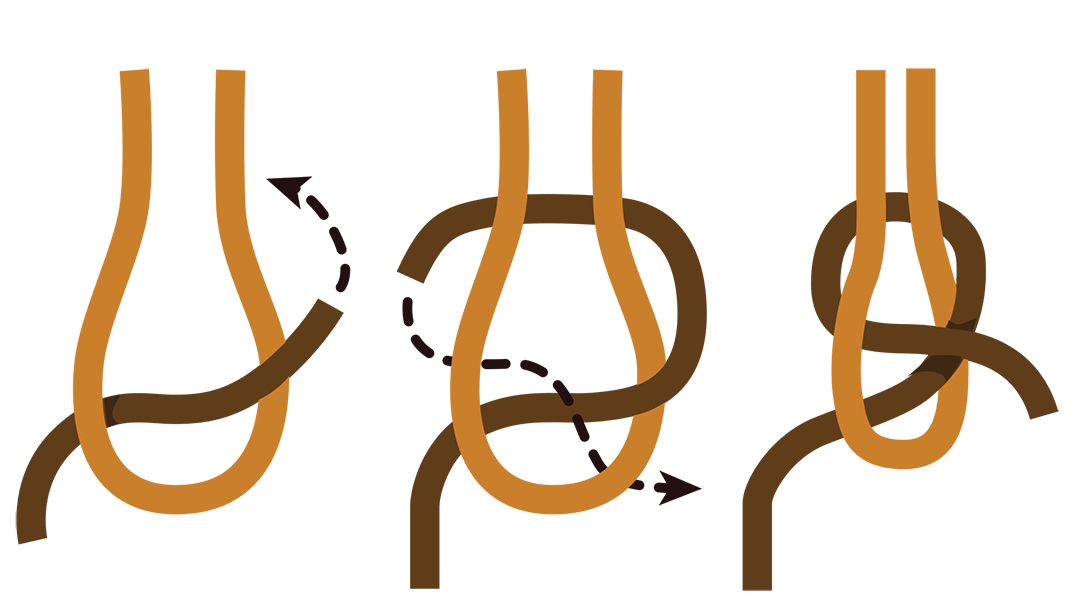 Two half hitches, similar to a taut line, can secure a line to a pole or a tree (i.e. hitching post). 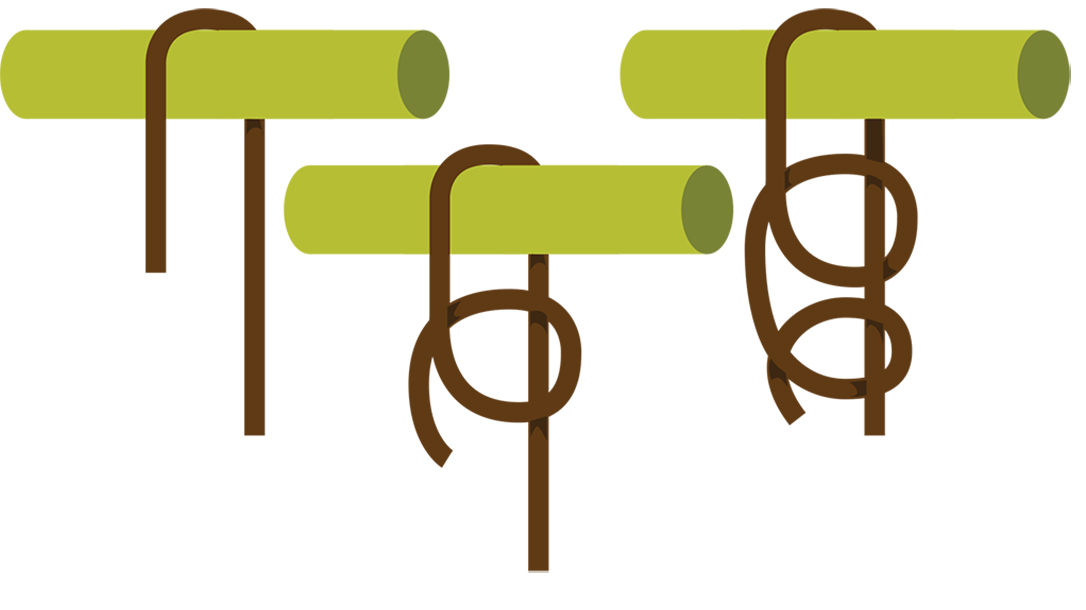 The blood knot is used to secure two fishing lines together, and is frequently used in fly fishing, both in casting and adding a fly to the line. 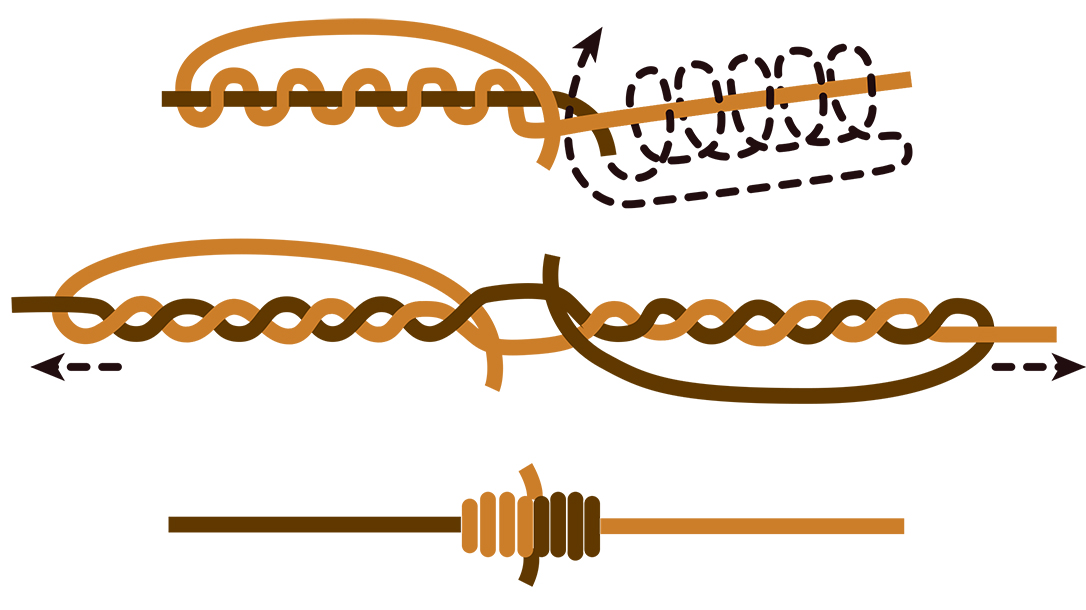 To tie a blood knot, overlap the ends of the lines to be joined. Twist one around the other exactly five times, and then bring the ends back between the two lines. Repeat the twisting process again on the other line (but in the opposite direction). Slowly pull the lines in opposite directions; the twists will gather together and the knot will close.

The clinched knot, similar to the blood knot, can be used to secure hooks, lures, and swivels in fishing line, as is the most popular fishing knot. 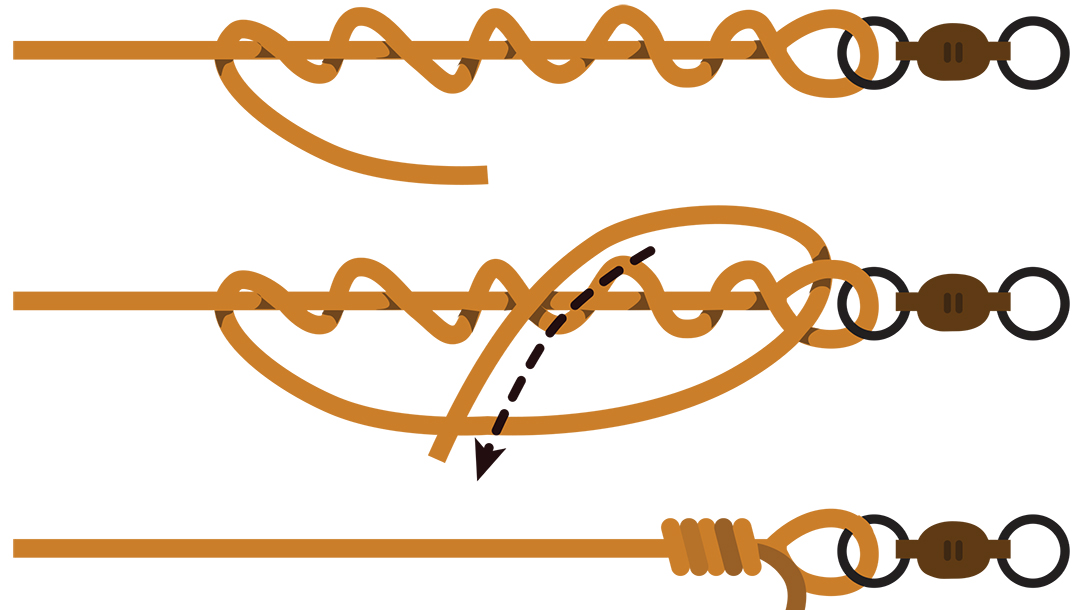 To tie a clinched knot, thread the line through the eye of the hook (or lure, etc.), and wrap it around itself at least five times. Bring the end of the line through the first loop, then behind the eye, and then through the large loop again. Pull on the end to tighten the coils against the eye. Trim off excess.

Another fishing line, the Palomar knot is used to secure a hook (or lure, etc.) to a fishing line or to fasten a fly to a line leader. 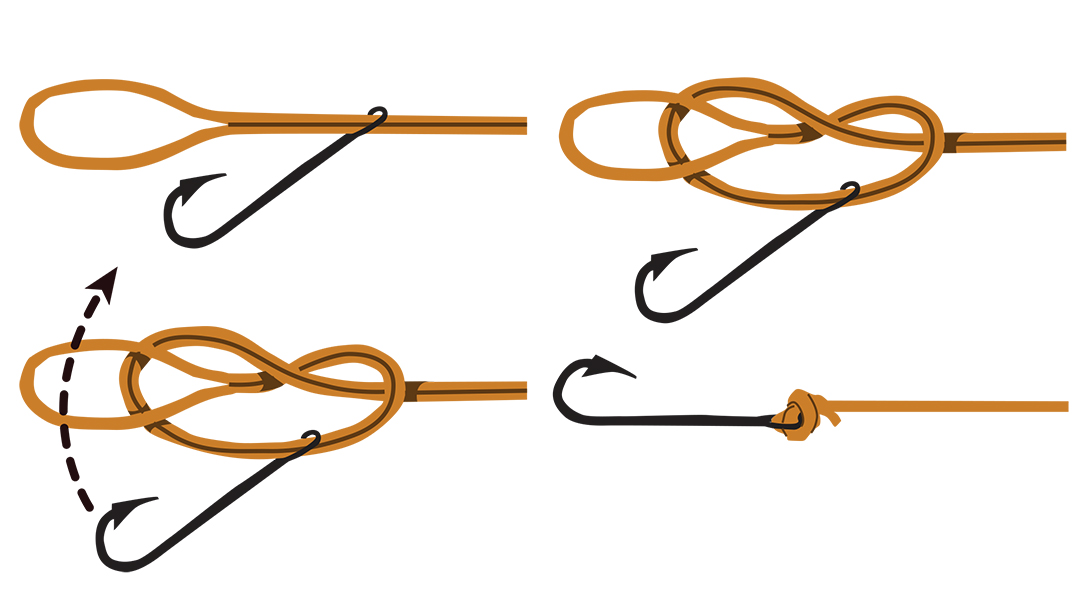 The taut line is indispensable if you are anchoring tent lines to stakes, as it grips relentlessly when taut. 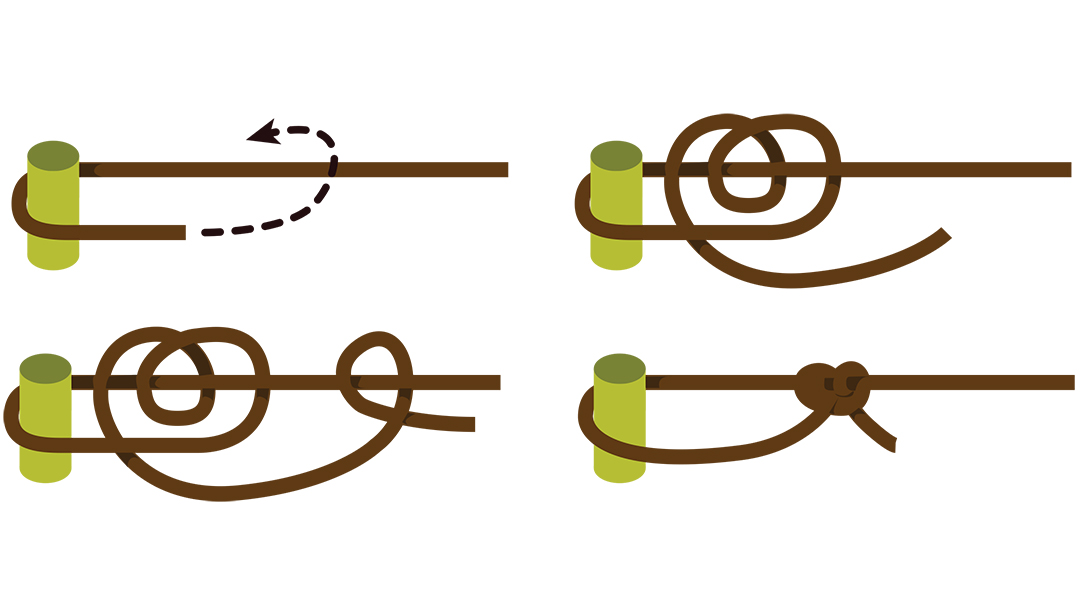 Like the name suggests, it secures a line to an anchor but it can also tightly secure a line to a post or tree. 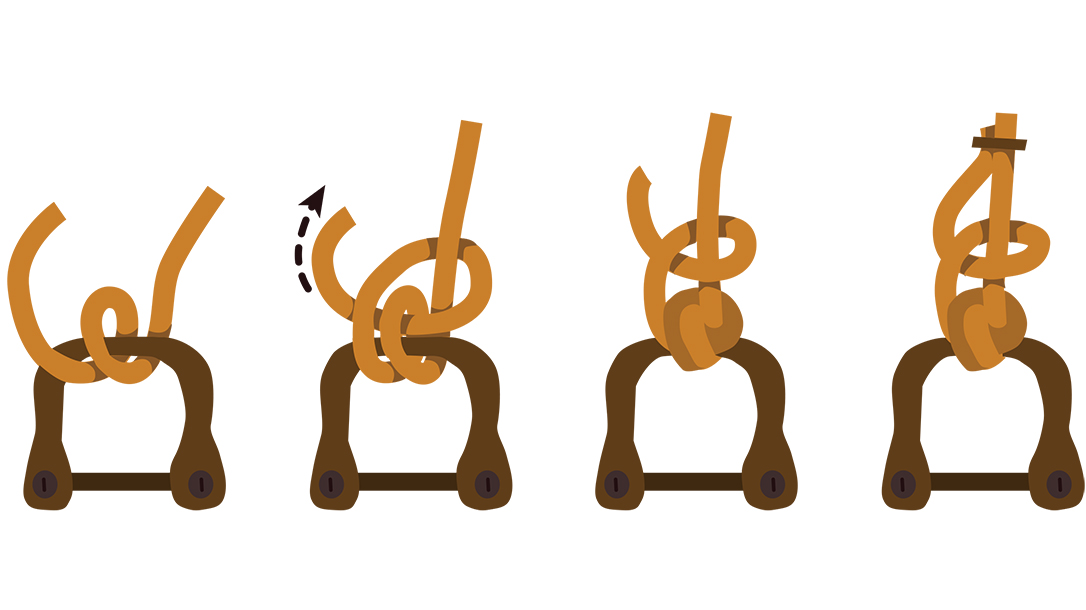 This knot joins two ropes together but is easier to untie than a square knot. 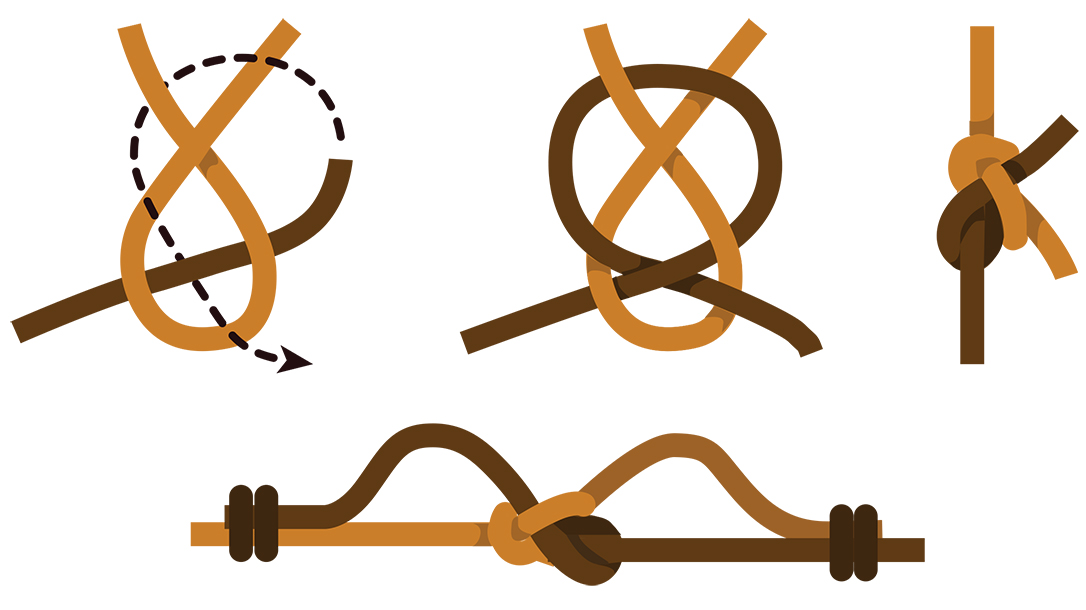 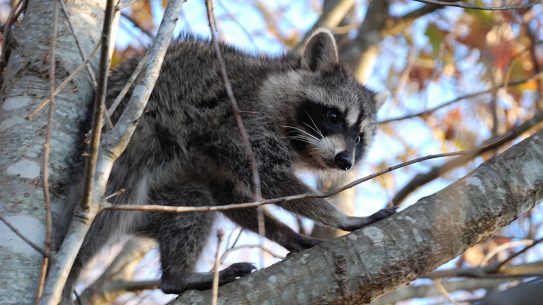 Although raccoons are cute, almost teddy bear like, they are definitely on the food...