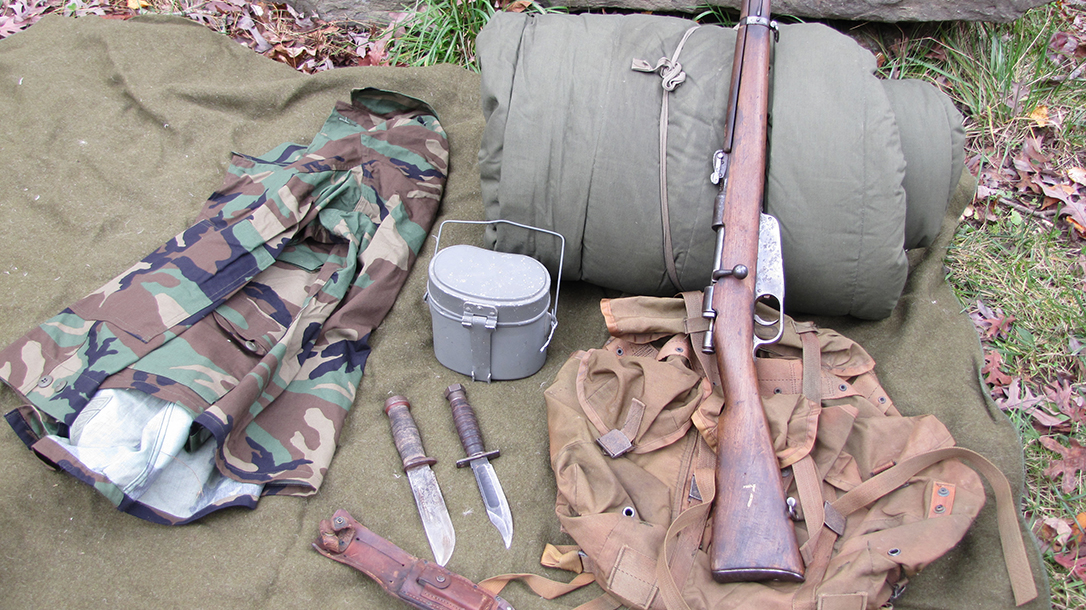 Photo by Dan Shechtman
A host of well-made clothing and gear is available as army surplus.
Comment(s)

A wise man said, “Those who need a good gun the most are usually the least able to afford one.” The woodsman who feeds his family from the forest is typically long on grit and resolve but short on cash. It’s not only his gun that’s precious but also his knife and kit. Subsistence hunters, trappers, miners and others who live close to the land have historically solved this problem by using Army surplus equipment. After every war, vast amounts of equipment become available. This equipment that is reliable, durable and cheap.

By the end of the American Revolution, Brown Bess and Charleville muskets were everywhere in the colonies. The British and Continental armies were armed with the Brown Bess. The French had sent thousands of their Charleville muskets to the colonials. After the war, these muskets were found on farms from Maine to Georgia and west into the Alleghenies. After being cut down to a size suitable for handling in the woods, they were ready for buck and ball, and they took game and defended the homestead. 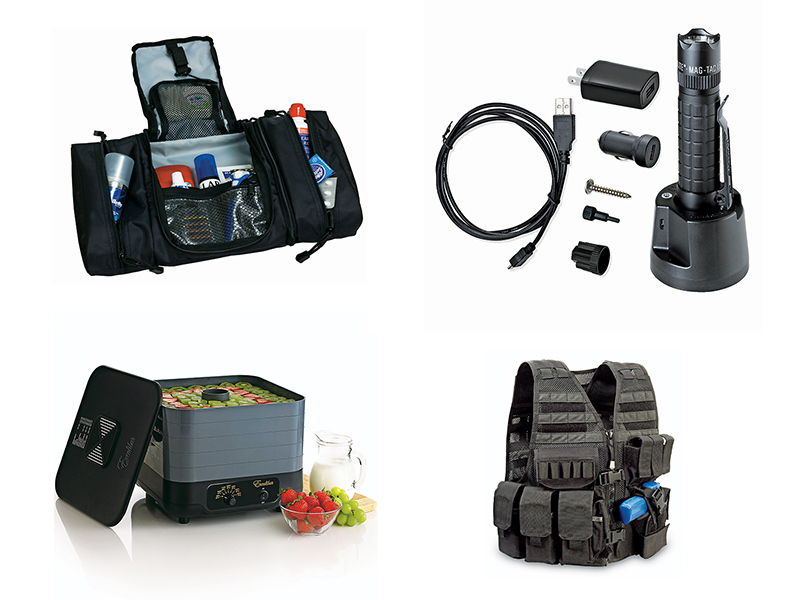 The Harper’s Ferry Model 1803 was the gun issued to the Lewis and Clark Expedition in 1804. After the return of the expedition in 1806 and the opening of the fur trade, many aspiring mountain men had Harper’s Ferry rifles across their saddles on their way to the shinin’ mountains. During the Civil War, the Springfield Model 1861 and Pattern 1861 Enfield were used by both sides, and after the war, they went west with sodbusters and homesteaders. The Sharps carbine found its way onto the Great Plains. The Krag-Jørgensen from the Spanish-American war is still a viable big-game rifle.

While in Canada and Alaska, where I led wilderness canoe trips, I got to see what the locals hunted with. What the back country trappers and subsistence hunters carried was a who’s who of military rifles suited to backwoods living. These guys lived on their guns, so their advice was sound. I saw Lee-Enfields, Mausers from several countries, M1903 Springfields, Mosin-Nagants and SKSs. One trapper packed an Italian Carcano.

The .303 ammo for Lee-Enfields is becoming scarce, and German Mausers are collectible and pricey. Remaining bargains include the Yugoslavian Mausers, Mosin-Nagants and the SKS. I was watching a series on Alaska a while ago in which a native Inupiaq woman was hunting caribou with a Mosin-Nagant with open sights. The caribou were on the run and she was spot on, hitting several at what looked like 100 yards.

The highly available SKS is the gold standard for subsistence hunters in Siberia and North America. I’m sure I’ll see quite a few SKSs in action in Pennsylvania this deer season, as hunting with semi-autos has been legalized. The Carcano, a capable deer rifle in 6.5x52mm, can be found for less than $100. I paid $80 for mine.

Military rifles are available and affordable. Above all, they are rugged and made to withstand all conditions, environments and the ineptitude of raw recruits. They are great for hunting in rough country and are perfect for the truck or cabin, or as an all-purpose backup, as they require little maintenance and are there to grab and go. They are not as accurate as your .270 Remington, but at 200 yards, they are game getters. (That said, off the rack, they need to be carefully examined before shooting. It’s wise to have a gunsmith look at the firearm.)

Swords and bayonets have been around as long as gunpowder, but none are much good for the mundane chores of the common belt knife. The first documented U.S. military-issued knife was the 1849 Ames Rifleman’s knife. At 18 inches long overall, it wasn’t quite suited for shaving tinder or slicing bacon. If you were a recruit heading for General Washington’s encampment—or Lee’s or Grant’s or Teddy Roosevelt’s—you would have on your belt a knife from home.

World War I found military-issued knives in the form of bolos and knuckle knives with spikes for blades, which were well suited for trench warfare but not so for woods work. World War II finally brought GI-issued knives that were useful for the day-to-day challenges of living in the woods, fields and jungles that were the battlefields. Many of those knives were basically militarized hunting knives, such as the Mark 1, with its 5-inch blade. Other knives were modified Bowie patterns, such as the Mark 2, generically called the KA-BAR. The Mark 2 was more of a combat/utility knife with a 7-inch blade. It was produced by at least eight knife companies. The Ontario Knife Company (OKC) and KA-BAR still make the Mark 2.

The KA-BAR, or Mark 2, has stood the test of time as a woods-worthy bush and survival knife. For several years, I wrote the survival column for Tactical Knives magazine. One of my assignments was to interview survival experts about the knives they carried. I contacted former SERE instructors, professional trappers, former SEALS, search-and-rescue team leaders, wilderness canoe guides and others. The responses varied from custom choppers to modest Mora knives. The one knife mentioned most was the KA-BAR.

Perhaps the unsung hero of military knives is the Cattaraugus 225Q. The 225Q is a stout knife with a 6-inch blade. It doesn’t have the lethal look of the KA-BAR but is a solid performer. The blade is tough enough to pry with yet sharp enough to slice through heavy rope. I carry one in my pickup and dump trucks. It has done yeoman’s work, from prying out logs frozen in the woodpile to dressing road-killed deer.

Another overlooked knife of the war is the Pal RH-36. It’s a classic Bowie/hunter-style knife with a 6-inch blade. The words “unsung” and “overlooked” translate to it being affordable in used condition. 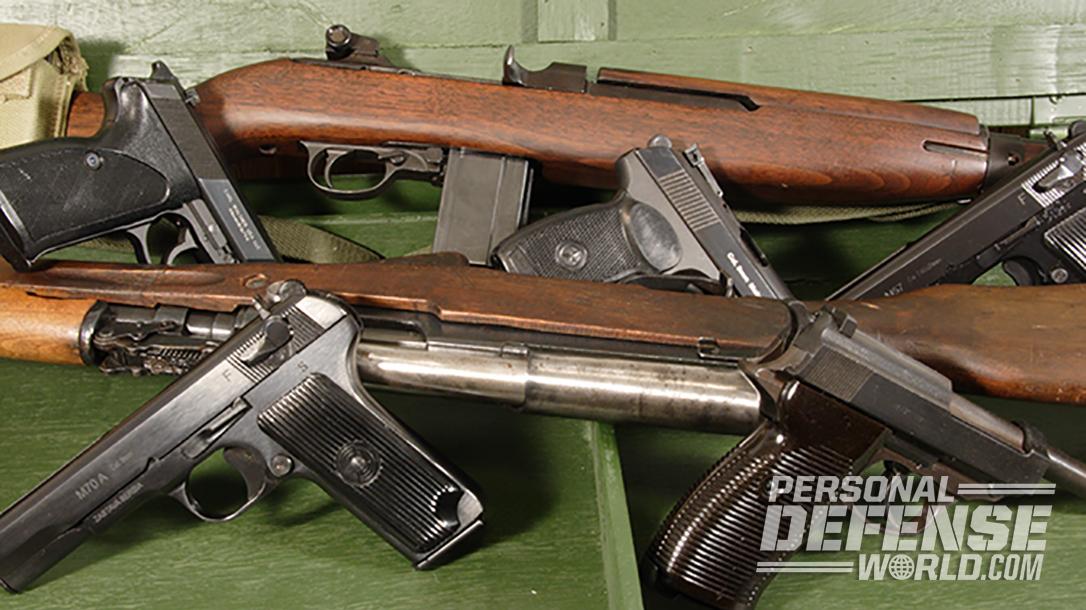 Yes, You Can Use Surplus Guns for Home Defense

The knife the Vietnam War produced that’s most useful for our purposes is the pilot survival knife. The knife was developed in 1957 and carried a 6-inch, Bowie-style blade. By 1962, enough pilots had complained about the discomfort caused by the longer blade that it was shortened to 5 inches. The pilot survival knife is a solid, practical knife that’s a real user.

As a result, Army surplus knives, like the rifles, are rugged, utilitarian pieces of kit. Made from 1095 high-carbon steel, they hold an edge and can be resharpened on a river rock. Like everything else military, in excellent condition, they are collectible and pricey. The good news is that even in rough condition, with a little care, steel wool, a stone and file, these knives can be brought back to being as woods worthy as the day they were issued. A lot of knife can be had for less than $25.

I spent my career teaching at a school where I had established an Outward-Bound-type program. Because the school was supportive, through the years, I attended several excellent survival courses. One of the finest was a winter survival course taught by Mors Kochanski. The course was held in northern Alberta, Canada, in March, when the temperature could drop to well below zero. Not surprisingly, the gear list was clear about clothing requirements. This was a few years after the Berlin Wall had come down, and Soviet Bloc items deluged the market. To equip myself, I hustled to the local Army/Navy store and came home with a complete set of East German military winter wool clothing for about $70.

Our final exercise involved being in the bush for 24 hours with a bow saw, an ax, a knife, a container of matches and only our clothing—no sleeping bag. The temperature was -10 degrees Fahrenheit. I built a steep lean-to suited for the boreal forest to block the wind and reflect the fire. I constructed a bough bed off the ground. Therefore, the warmth from the fire would circulate under it, and then I began to cut a mountain of firewood for the body-length fire that would hopefully see me through the night. When I was picked up the next day, I was no the worse for wear—just a little tired from feeding the fire every hour. Many of my more stylish classmates didn’t fare as well. Those East Germans knew how to keep a guy warm.

Before shoveling that snow-covered driveway, keep these tips in mind.