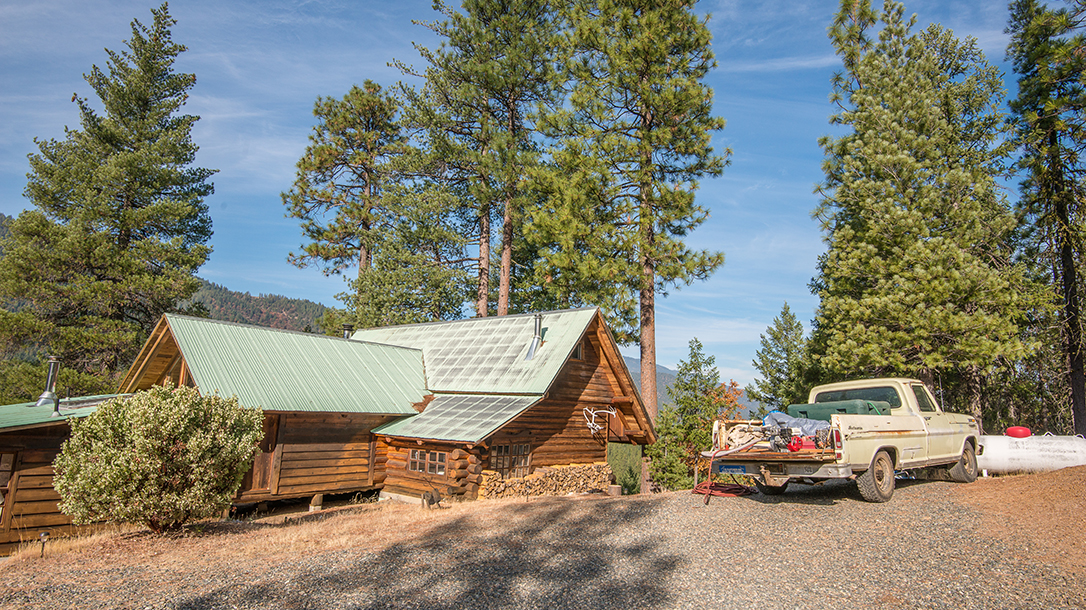 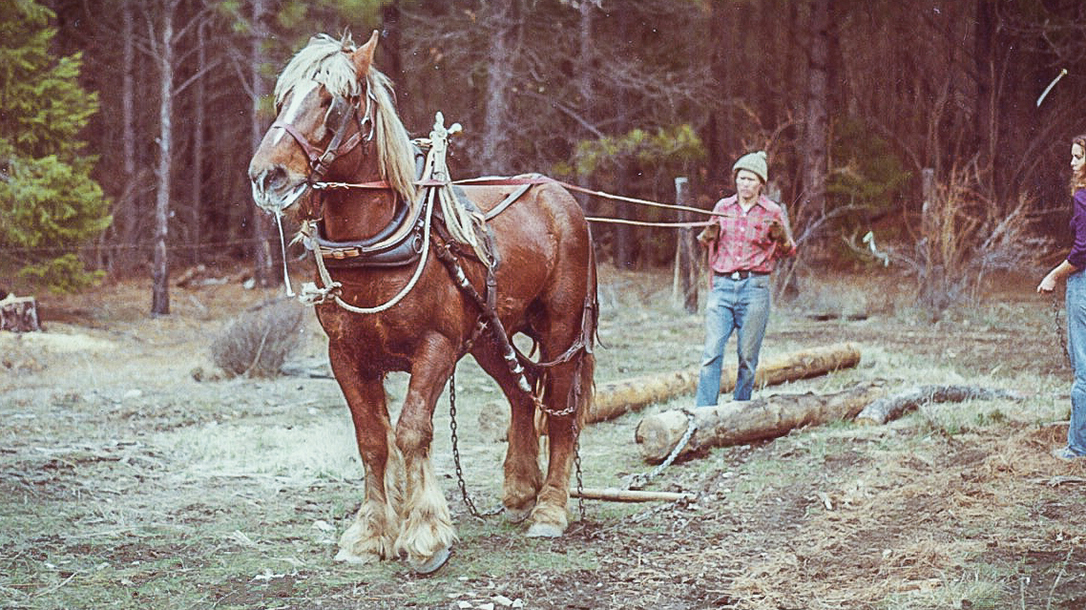 2 of 3
Photo by Paul Fattig
Fire-Wise Homestead-Building
Six large horses did a lot of the work. 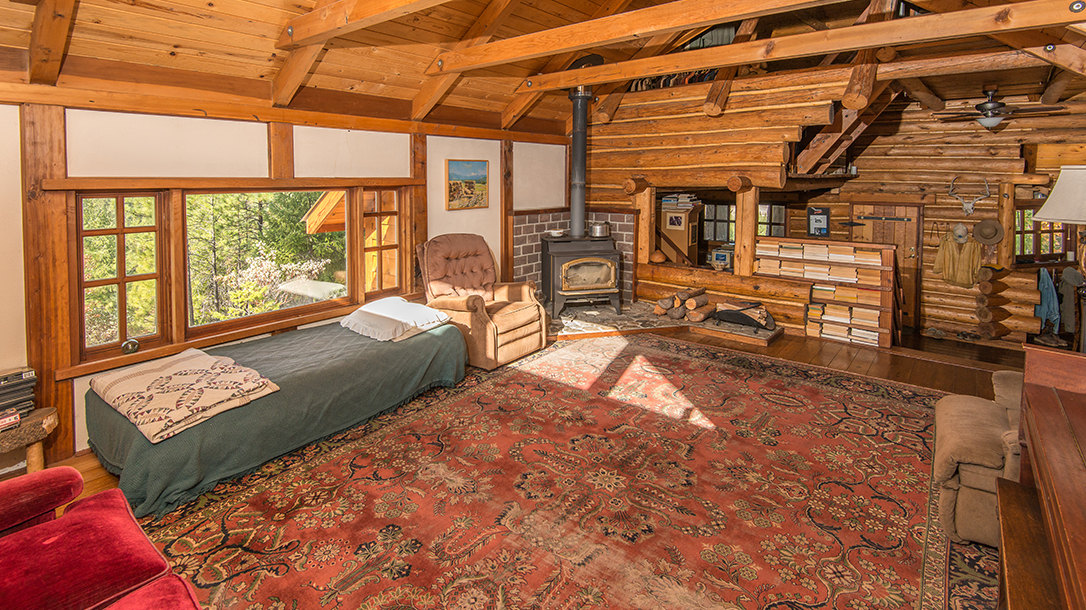 3 of 3
Photo by Paul Fattig
Fire-Wise Homestead-Inside
Inside the cabin. 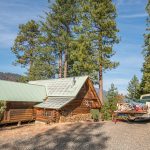 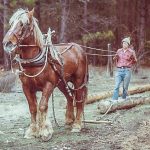 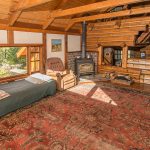 When the fire dragon comes blowing hot cinders and sparks on Murry Taylor’s picturesque log home in the eastern foothills of northern California’s Klamath Mountains, the flaming reptilian had better pack a lunch. And, a big one at that. At 76, the retired smokejumper may no longer leap out of a perfectly good airplane to fight fires. He remains on top of his game when it comes to making the off-the-grid fire-wise homestead on his 40-acre wood as safe as possible from the threat of wildfires come summer. 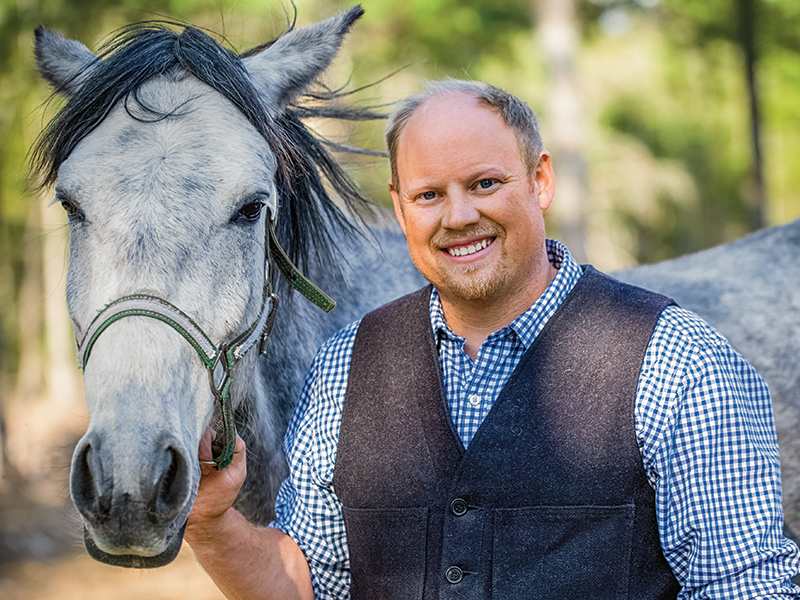 “The forest was dog-hair thick when I bought this property in 1975,” he said of the trees adjacent to the house he built without the aid of electrical tools. “The idea is to go in there and choose the dominant stems you want to leave. You pile and burn the rest or turn it into firewood.”

The remaining forest is healthier and more resistant to wildfires. This is because of increased spacing, which mimics an old growth stand.

Taylor knows of what he speaks. Not only is he a veteran wildlands firefighter, including 27 fire seasons as a smokejumper, he is also a forester and a wildlands fire consultant. He has taught “fire school” to his neighbors—i.e. the rudimentary lessons in fighting wildfires. In addition, he is a prolific author who has written three books. These include Jumping Fire, a highly regarded memoir of his smokejumping adventures in Alaska.

Having fought countless summer wildfires when they are the most ferocious, Taylor knows the best time to thin brush and vegetation near a cabin in the forest is during the cooler months before fire season begins. That’s why he invited a dozen former smokejumpers over for a few days this past November to help thin some areas and torch brush piles. His old buddies helped him burn some brush piles and thin the vegetation around the 2,800-gallon water tank just uphill from the house. “It’s also a chance to get together,” he acknowledged of the annual gathering. “We like to tell stories about when we were all young and strong and handsome and looked good with our shirts off. Yeah, we were all young, strong, hardworking and ate smoke—and nobody died.”

The naturally-gifted storyteller’s smile tells you he may be exaggerating a mite.

Yet, he is dead serious about reducing the threat of a wildfire in a forested area. Even when it came to cutting logs on his property to build his fire-wise homestead, Taylor took wildfires and forest health into consideration. “As a forester, when I cut these logs for this house, I was super-sensitive,” he said of striking a natural balance. “So I cut them roughly in the species composition percentage.”

He made a point of leaving the larger trees, some of which were there when settlers first arrived in the region in the mid-1800s. The bigger trees with their thicker bark and lack of ladder fuel help stave off a wildfire, he noted. Moreover, he mainly cut trees that he described as “suckers,” trees living under the shadow of larger trees and sucking the water and nutrition from the soil that would otherwise feed the big boys. “Some of the trees I used were crooked, but it helped define the character of the cabin,” he said. “That’s how much I cared about the land and living properly on it. Wendell Berry writes about being in place on your land. He speaks about land in a way that holds it as something sacred.”

“When I bought this place, I was looking for a rural place to be away from the madding crowd,” Taylor said, an obvious tip of his literary hat to Thomas Hardy, one of his favorite writers. “I wanted to be away from the craziness I sometimes see in modern urban life.”

All told, there are roughly 90 logs in the fire-wise homestead. They’re all salvaged from his thinning process aimed at improving forest health. “I took a drawknife and peeled every one of these logs myself—twice,” Taylor said, adding he first peeled them shortly after cutting them. “But, when I moved them up the incline with the draft horses the logs were piled and they started graying. So when it came time to put them in, I had to peel them again to remove the gray.”

He confessed to having fired up a chainsaw on numerous occasions during the building process. “But, all the logs we drilled by hand,” he stressed. “They are pinned about every four feet. There was enough sawdust from cutting the logs and drilling for my son (Eric) to cover the trail down to the raven house,” he explained. That is the small cabin about 300 yards down the hill. “Back then, we didn’t have a road up here,” he said. “I hauled everything up here on an inclined tram. Everything, including 33 loads of sand and gravel, the cinder blocks for the foundation, all the logs.”

The six big horses he employed—largely a Belgian and Shire mix since given to an Amish family in northern Idaho—were drafted to drag the logs used in the building of the house and a pole barn near a small meadow on the property. He took a sabbatical from jumping for eight years to build while working locally for the U.S. Forest Service. “I didn’t want to build a road because I thought it might be too damaging to the land,” he said. “But, the county said I had to put in a regular septic system so I put the road in after the fire season of ’88.”

From Shelter To Fire-Wise Homestead

Initially, the fire-wise homestead was intended to be little more than a shelter to get out of the rain. But, as he built, with the aid of a girlfriend and other friends, he expanded his plans, which were roughed out in red pencil on the wood subfloor. He built a kitchen, a reading room to house his books and writing desk, two small bedroom lofts, a bathroom, and a sauna with a sunroom. 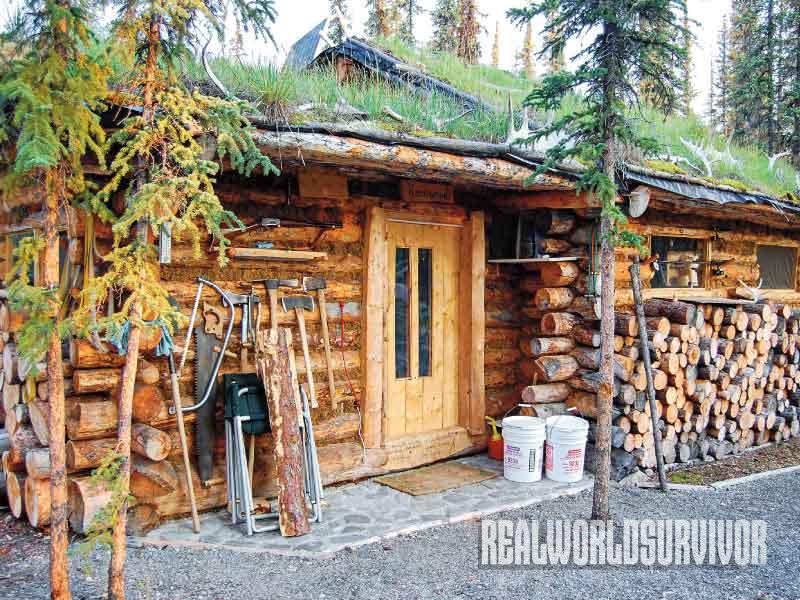 Taylor carefully crafted the attractive front door out of two-by-six lumber. When you close it, you feel and hear it click securely into place with a precision that would impress a Swiss watchmaker. “The main room was open beam until my son came to live with me when he was 12 and I added another bedroom loft,” he said, noting that his son stayed until graduating from the local high school. Now a homebuilder in northern California, Eric and his wife, Petra, love to visit the forested property where he once lived.

Like any fire-wise woods dweller, Taylor capped it all off with a metal roof instead of wooden shingles. “It took about seven years to build everything,” he said, noting he relied heavily on an instructive book titled A Pattern Language, which was produced by the University of California-Berkeley.

He hasn’t had an electricity bill for 45 years. He figures he pays a little under $50 a month in energy costs, including the maintenance for an array of solar panels. “That’s for gas and amortized maintenance cost of solar,” he said. “Solar isn’t free. You have to do upkeep. But, I live on solar power almost exclusively. The solar operates a few lights, radio, my computer. So I don’t use much electricity. If it gets rainy for three or four days, then I will start the generator.”

Propane provides the energy for a hot water heater, cooking stove and refrigerator. Two wood stoves provide plenty of heat on those days when solar power isn’t enough. Once a week, he pumps water out of a 90-foot well to fill the water tank near the cabin, filtering the water twice. It takes 2.5 hours to top off the 2,800-gallon tank whose water is gravity fed to the fire-wise homestead. “I had to put the well in when the spring went dry back in ’77,” he said. “We’ve been in chronic drought since then. Right on the border of California and Oregon has been just about the center of where the drought has been in the West.”

He isn’t about to let any fire dragon drive him away. He even has a fire-fighting brush rig in the form of a white 1970 Ford four-wheel-drive pickup truck. It has a 250-gallon water tank and pump on back, complete with a short fire hose. “My son put a new motor in it,” he said, noting that the Taylor family fire truck, which once belonged to his father now has a 360-cubic-inch V-8 engine. “I’ve never initially attacked with it but it is good to have around.”

With that, he stepped back to survey his fire-wise homestead and the forest beyond. “Yeah, this is a crazy little house,” he said. “But I love it. I’m going to live here as long as I can.” 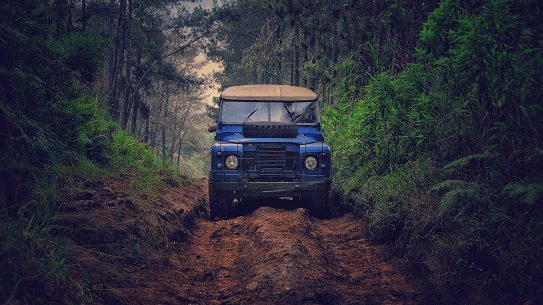 As we go into the winter months, it is important to make sure you... 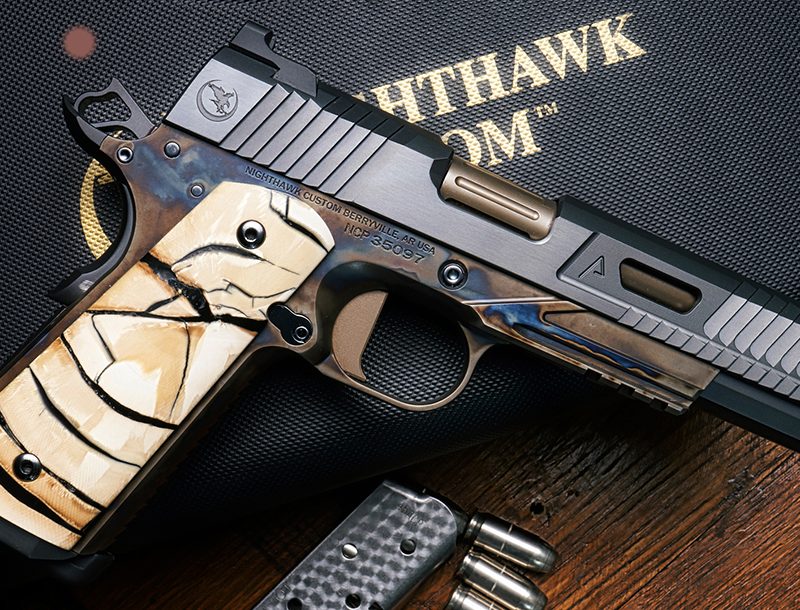 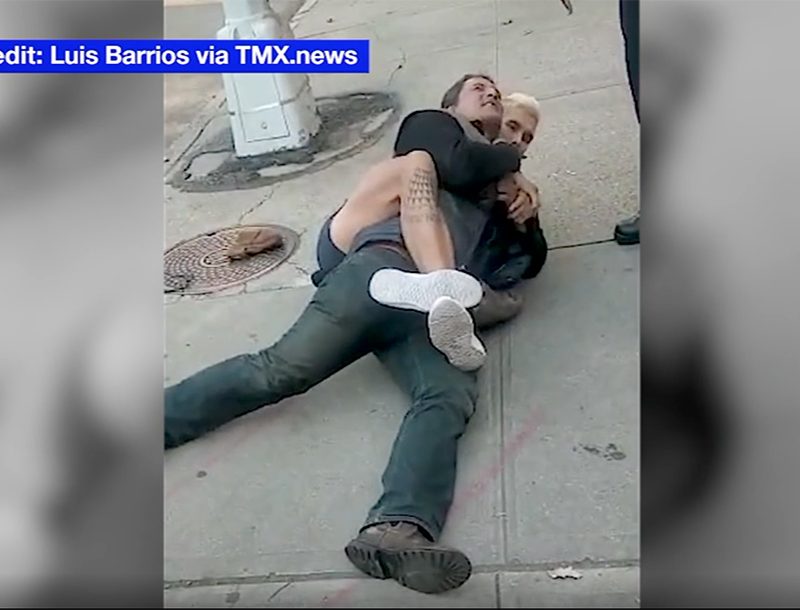 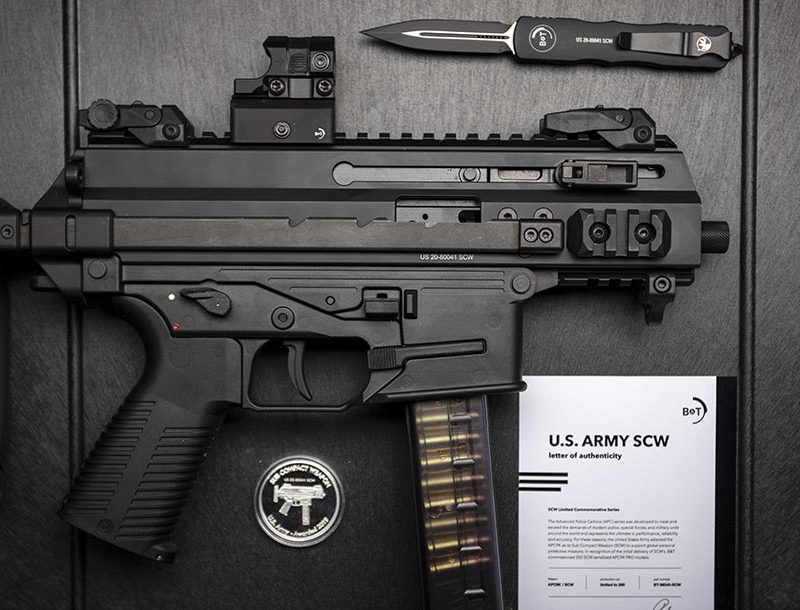