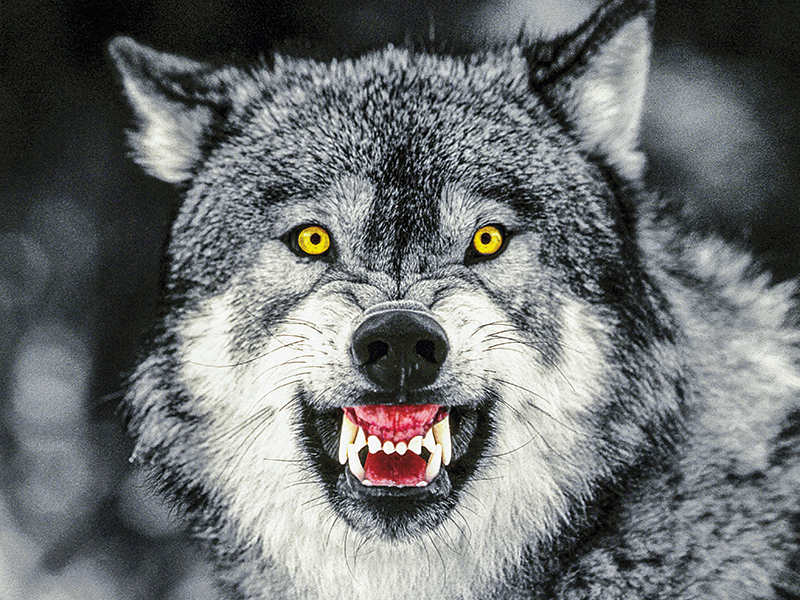 1 of 3
Photo by Corbis
Surviving Wolf Country
You can avoid a sight like this by turning around when you encounter fresh wolf tracks and staying away from areas where you hear wolves howl. 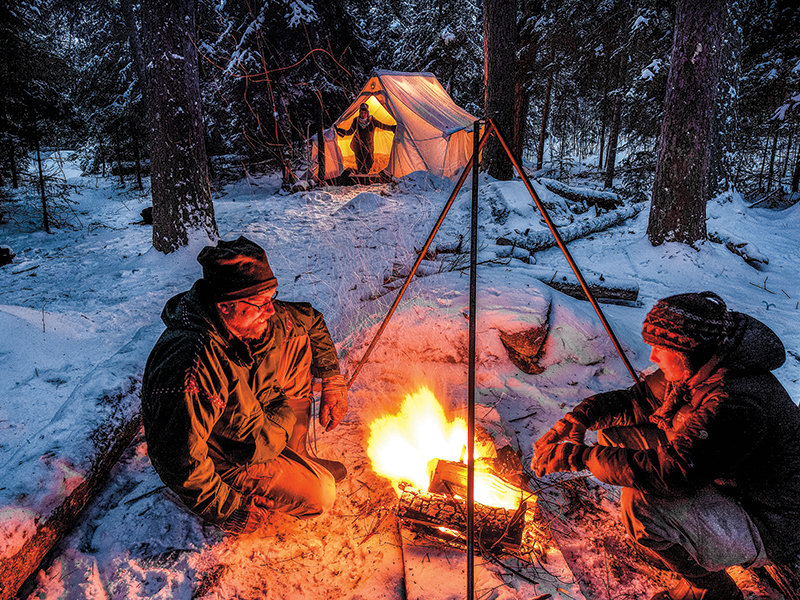 2 of 3
Photo by Corbis
Surviving Wolf Country
Even when you’re resting by a campfire with a partner, pay attention to your surroundings. 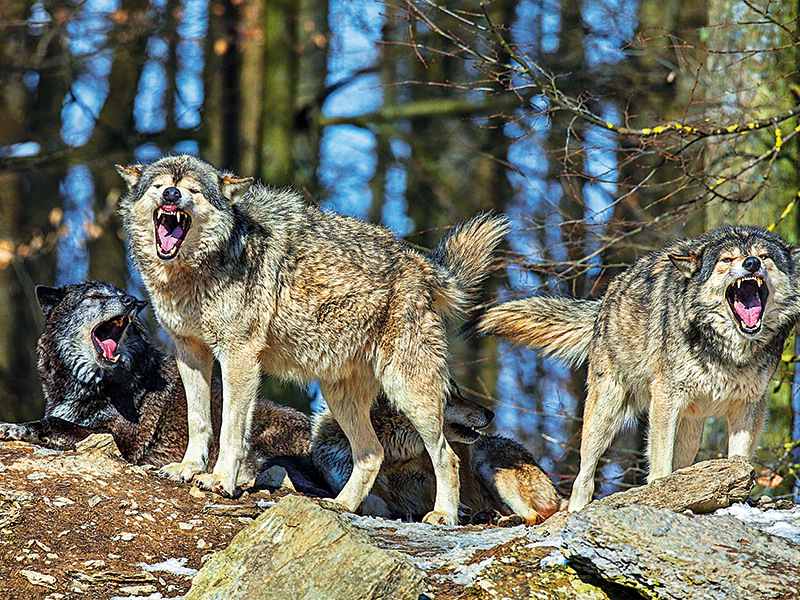 3 of 3
Photo by iStock
Surviving Wolf Country
Wolves hunt in packs in order to pull down large prey. Stay away from any fresh kill sites. 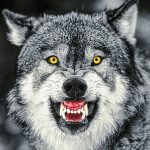 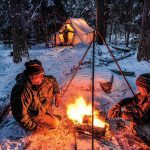 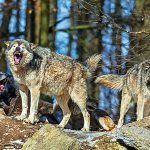 An attack from a pack of wolves was the furthest thing from forester Rory Mattson’s mind as he walked a new logging road in Michigan’s Upper Peninsula one day to see if it needed any modifications. He eventually came to a place in the freshly plowed dirt where there were many wolf tracks. One of the prints stood out due to its large size.

Rory put his hand next to the large track for comparison and the print was larger than his palm. “I thought it would be nice to see the wolf that made that track,” Mattson said, “and I got my wish.”

But it was much closer than he expected and under much different circumstances than he could have anticipated. After walking further, Rory came to a curve in the road, and when he was halfway into the corner an odor caught his attention. He was wondering what the smell was, but, as he rounded the corner, he got his answer. It was a dead carcass.

“The first thing I saw was blood all over,” Mattson said. “Then I noticed a good-sized doe with a wolf standing over it and another wolf nearby. They were in full growl and snarl mode. ‘OK, they are going to protect this kill,’ I thought to myself, ‘so I am going to get out of here.’ I think I only backed up a couple of steps when I heard growling behind me. I turned around and there was a big male 50 feet away. He was standing in the road with a smaller wolf.”

With retreat the way he had come along the logging road cut off by the big male, and the kill in the opposite direction on the road, Rory’s only option to get away from the wolves was to cut through the woods. Mattson was wearing a denim shirt that was unbuttoned with a T-shirt underneath. He extended the unbuttoned shirt to the sides to make himself look bigger and started yelling at the big wolf, but those actions had no effect.

As Mattson moved toward the woods, the wolf moved with him and even approached closer. Then Rory saw some old sticks of pulpwood in the ditch next to the road that were 10 feet long. He lunged to grab one of the pieces of wood to use as a weapon. When he did that, the wolf closed the distance between them to 15 feet.

Mattson waved the cumbersome piece of pulp between he and the wolf as best he could to try to keep the predator as far from him as possible as he backed up. When he backed into a balsam tree that was 16 inches in diameter that had limbs he knew he could climb, Rory threw the wood toward the wolf and climbed the tree to a height of 8 or 10 feet.

“When I looked down, the big wolf was at the base of the tree, growling.”

With wolves increasing in number in the lower 48 states and being common across Alaska and Canada, the odds of encountering a pack of these killers has gone up, if you end up in woodlands that they inhabit. Growing wolf populations are found in the Upper Peninsula of Michigan, northern Wisconsin and Minnesota and the western states of Wyoming, Montana, Idaho, Washington and Oregon. Wolves typically hunt in packs made up of family members to increase their effectiveness at catching and killing large prey such as moose or elk.

Predators capable of killing animals as large as moose, which can weigh up to 1,000 pounds or more, can certainly prey on people as well. Fortunately for us, wolves don’t normally prey on humans, but there are records of wolves having killed and eaten people. Candice Berner was the most recent victim of a pack of wolves. She was killed while jogging near the Alaskan village of Chignik Lake on March 10, 2010. Kenton Joel Carnegie was preyed upon by a pack of wolves on November 8, 2005, near Prince Albert, Saskatchewan.

Potential wolf attacks like the one Rory Mattson experienced in Upper Michigan are more common. Happening upon a fresh kill made by a pack of wolves is certainly a dangerous situation, as he found out. He could have avoided the situation he found himself in by turning around when he saw the fresh wolf tracks in the sand of the road he was walking on. Wolf tracks look like prints made by a big dog. The more tracks there are, the more wolves there are in the pack. Rory saw five wolves in the pack he encountered.

Packs of wolves often communicate with one another by howling when they get separated. Even when the pack is together, they sometimes howl as a group when they are getting ready to start a hunt or after having made a kill. Steer clear of areas where you’ve heard wolves howling to reduce the chances of encountering wolves. If you are in wolf country, traveling with one or more partners reduces the chances of being attacked. Groups of people are least vulnerable to attack. A lone individual is most likely to be viewed as prey.

You have to take as many precautions as possible when alone in wolf country. It’s important to keep in mind that wolves have large territories, they can cover a number of miles during the course of a day and they don’t always advertise their presence by howling. And it’s not always possible to see wolf tracks in forested areas where leaves cover the ground, or the ground may be too hard for prints to show. So, if you find yourself in a situation like Mattson, doing as he did is one of the best ways to avoid being injured when confronted with wolves.

Don’t try to run from wolves. That behavior can trigger an immediate attack, and it is impossible to outrun them. Face the animals and look for a weapon or weapons to defend yourself. It’s even better if you already have a weapon in your hands. When hiking in wolf country, I often have a sturdy 5- to 6-foot-long walking stick with me. A walking stick can also serve double duty as a protective club.

Carrying pepper spray with you, if possible, can also be a good idea. Although pepper spray is designed for use as protection from bears, it can also work on wolves. If you have access to a handgun or some other type of firearm, that’s the best protection you can have. After the encounter with the pack of wolves, Mattson stated that he planned on always carrying a handgun with him when in the woods.

The sound of a shot being fired in the air or into the ground near wolves may be enough to scare them away. If a warning shot doesn’t work, using a firearm to shoot wolves would do the trick. The law allows people to shoot wolves and other predators for self-protection.

If you don’t already have some type of weapon with you for protection from wolves, look for a sturdy limb or stick to use as a club. Rocks that are of a size that can be easily thrown can also be used to scare wolves away. If there’s a tree handy that you think you can climb, take advantage of the opportunity to do so when you can. That’s how Mattson avoided an attack from wolves, and I interviewed another Upper Peninsula resident who escaped a wolf attack by doing the same thing. In both cases, the men waited until the wolves were gone before climbing down from the trees. They were then able to make it to safety.

Making yourself look as big as possible by opening a shirt, jacket or coat, as Mattson did, will sometimes work to intimidate threatening wolves. Clapping your hands and hollering will sometimes scare wolves away, too.

No matter how beautiful or majestic these creatures can be, always remember that wolves are wild and driven only by instinct. If they are hungry or feel threatened, they will come after you, especially when they have numbers on their side. Without the proper protection, your campsite could quickly turn into a scene from a horror movie.

So if you find yourself in wolf country, the best way to avoid an attack is to always travel with one or more partners and avoid areas where you see fresh wolf tracks or hear wolves howling. To protect yourself if threatened by wolves, carry a walking stick that can double as a club. Pepper spray and firearms can be even more effective as protection. You can escape wolves by climbing a tree, but it’s best to just not disturb their territory if you can avoid it. And if you come across a pack, be prepared to fight.

This article was originally published in SURVIVOR’S EDGE™. Subscription is available in print and digital editions here. 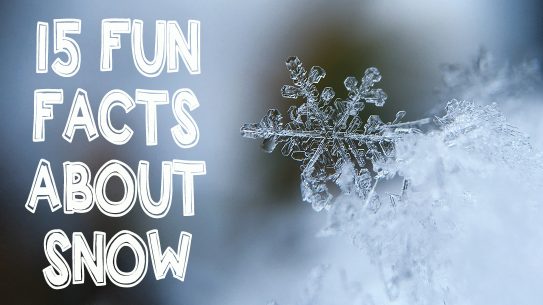 As Winter snow begins to fall, use these fun facts about snow to warm...