1 of 3
Photo by Sean Utley
3 Against 1
What may seem like impossible odds, three big men against one small woman, is in reality a very survivable situation

2 of 3
Photo by Sean Utley
Wielding Weapons
When a weapon is added to the mix, whether it’s a gun, knife or perhaps a bat, your priority immediately switches to the person wielding it.

3 of 3
Photo by Michael D’Angona
Staying Aware
When approached by more than one assailant, always focus on the entire group and not one person individually.

Imagine that you are rushing down the sidewalk trying to meet a friend downtown and can’t find the address. You pass street after street, all the while getting more and more frustrated that nothing looks familiar at all.

You notice the buildings and the nearby storefronts appear a bit more rundown as you keep searching, and the overall look of the area is marked with graffiti, and litter is scattered everywhere. You turn the corner and realize your problems just got worse. Three rough-looking men, one holding a steel pipe, quickly surround you. Your only chance is to make it through the alleyway at the opposite end of the parking lot. The only problem is that you have to go through them first.

What may seem like impossible odds, three big men against one small woman, is in reality a very survivable situation. In fact, with a little knowledge and training, this woman can escape from her attackers’ trap and most likely take a few of them down hard in the process.

When approached by more than one assailant, always focus on the entire group and not one person individually. If your eyes are concentrated on the attacker directly in front of you, whether he is spewing profanities or making an aggressive movement forward, it becomes very easy to let one of his “friends” slip out of your range of vision. This allows them to get the jump on you from your blind side or directly behind you. To prevent this from happening, always be sure to move back as the aggressive group fans out. This will keep them within your peripheral vision, until the point comes when you have to make a defensive move or go on the offensive.

Your number-one priority when attacked by multiple people is to find your way through the group and escape. It’s not like what you see in the movies. Your assailants won’t wait for their turn to attack. They won’t stand by while you are executing fancy or flashy self-defense techniques. Instead, they will all rush you at once, catch you and beat you to a pulp, to put it mildly.

Once you view your potential exit, you must do whatever needs to be done to reach it. Redirect attacks, strike and constantly move. You don’t need to interact with all your attackers, just the ones that block the path between you and your escape. One key advantage you have that most people find hard to understand is that when you start breaking joints, cracking noses and poking out the eyes of your first few “recipients,” the remaining men may begin to back up and unknowingly help you clear your path and make your escape.

One of the most important rules to follow during a multiple-attacker situation is to never stop moving. Your ultimate goal, of course, when threatened with an attack by a group is to get away and run to safety. But, more often than not, you will have to defend yourself and hopefully take down a few attackers in the process. As this is happening, your movement through the assailants must always be continuous. Whether you are striking, redirecting an oncoming punch or attacking your enemies’ vital areas, you can never cease your movement or remain in a stationary position for any length of time. Lack of movement will allow the group to reorganize and overcome you with their greater numbers. Stopping your overall motion could result in serious injuries or possibly death.

Moving through the group of aggressive attackers will mean little if you don’t do some damage to them. The strikes you throw should be quick, sharp and find their mark on your assailants’ vital areas. These areas include their eyes, nose and throat, as well as their lower ribs, their groin and exposed finger joints that can be manipulated while on the move. All of these “vital” areas will cause your attackers to be out of the game for a minute or two, which is all you really need to turn the tide and make your escape.

Keep both hands up, just slightly below your head, for the entire duration of the fight. This enables you to strike quickly while deflecting any oncoming strikes from your enemies. Avoid going for a knockout hit. This type of strike is very difficult to land with your body in constant motion. Also, short, quick front kicks may work to surprise an attacker or two, but continuous use may severely slow down your steady flow.

This concept is similar to “Keep Threats In Sight,” but it pertains to the actual physical contact you have with one attacker, as opposed to dealing with the group as a whole. You have no time to exchange blows with one individual while his fellow gang members are positioning to attack you from all sides. No matter how much you think you can overpower the “boss” or instigator of the fight, it will all be for naught when you are severely overcome by the masses. Also, to go one-on-one for any length of time stops your movement through the group and, as it’s been stated here constantly, this can be extremely detrimental to your success of getting out of the situation without major injuries.

Related Stories: How to Protect Yourself and Escape a Hair Grab

6. Hide Among Your Attackers

Moving past an attacker’s strike or grab and positioning yourself in their blind spot is crucial to allow you to use them as a human shield against the others. All it takes for you is a fraction of a second to make the initial move and then your body is instantly blocked from oncoming strikes. In fact, this scenario may play out so fast that your “human shield” may take some of the hits intended for you that couldn’t be pulled back or altered in time. Be sure to never try and hold onto your human barrier for too long; he could recover and turn on you or the group will merely come after you from opposite sides. Instead, drop him hard to the ground to help block your path, or push him directly into the most immediate threat that may be coming at you from any angle. Once discarded, repeat with a new “helper” if the need arises.

Grappling and Brazilian Ju-Jitsu are highly effective fighting systems that are extremely popular today, but not when it comes to a multiple-attacker situation. As previously and continuously mentioned (to reinforce it in your mind), you need to stay in motion. If you’re grabbed, it is highly likely the fight will be taken to the ground. In spite of the fact that your ground-fighting skills may be impressive, you won’t hold up very long against four, six or eight legs kicking you all at once and all over your body. They won’t play fair. They won’t wait their turn and they won’t pass up the opportunity to pull out a knife or gun to finish what they started right then and there.

If you do happen to get thrown to the ground, misstep while moving or just lose your balance, get up as quickly as possible and continue your flow as if nothing happened. Words to live by: Avoid going to the ground at all costs.

When a weapon is added to the mix, whether it’s a gun, knife or perhaps a bat, your priority immediately switches to the person wielding it. A weapon in a multiple-attacker situation is both bad (for obvious reasons) and good for you at the same time. True, if you are shot with a gun or stabbed by a knife, your fight may end quickly and with disastrous results. But, just as easily as you can fall victim to a weapon, so can one or more of your attackers.

In a confined area, there is limited space for others to successfully land a hit on you without interfering with their buddies trying to do the same. Now add a knife and/or a gun to the situation and it can become extremely dangerous for the other gang members as well. To help accomplish this, the first step is to redirect the weapon out of your path and then use large circular movements to help clear some space. Your attackers will immediately back off from fear of being cut, stabbed or shot. It’s also possible to take a few of the attackers out of the fight while disarming your intended target. If you are able to gain control of the weapon, it goes without saying that you can then use it against your attackers and turn the odds in your favor.

Related Stories: How to Escape a Rear Choke 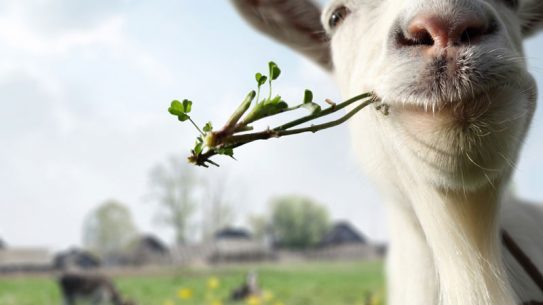 The Benefits of Raising Goats

It’s easy to fall in love with these supreme multi-taskers of the homestead once...