3 of 6
Photo by Steve Woods
SE_Female-knife-carry1319
Folding knife concealed in a sheath worn around the neck.

4 of 6
Photo by Steve Woods
c
Conceal folding knives under you shirt by clipping them to a body support.

5 of 6
Photo by Steve Woods
SE_Female-knife-carry1364
Whenever a weapon is concealed on the body, the main goals for its placement are concealment and accessibility.

6 of 6
Photo by Steve Woods
A good place to conceal a folding knife can also be inside of your boot.

Carrying any concealed weapon like a knife for self-defense purposes is futile if it cannot be accessed when needed while simultaneously being hidden from plain view. In the absence of being able to conceal a firearm, or for times when carrying a concealed firearm is forbidden, a self-defense knife may be the only deadly-force option available. 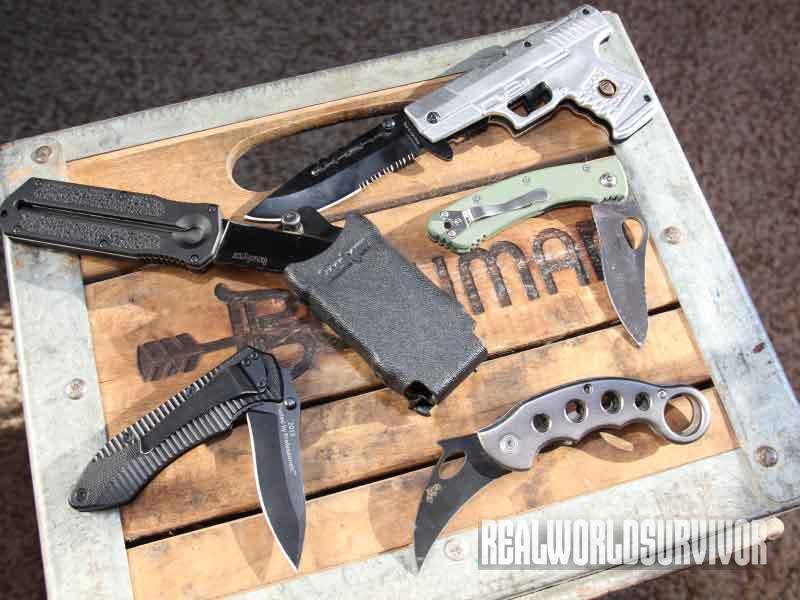 One compelling benefit of carrying a knife over some firearms, or other self-defense tools, is that they can be easier to conceal because of their compact size. Conversely, their smaller size can make deployment a challenge. The reality is that coming to the conclusion to carry knives for self-defense, and then selecting it, is child’s play in comparison to the decision-making process and commitment to training that accompanies concealing and deploying the weapon. Choosing how to conceal a knife (or any weapon for that matter) is a process that requires careful analysis and some forethought regarding potential violent encounters.

Ask to see any knife enthusiast’s blade and their response might be, “Which one?” This phenomenon of carrying multiple weapons is unique to the knife culture. To some people it may seem a bit extreme to carry more than one knife, but if confronted with a life-or-death situation, survival will partly depend on accessing at least one knife. Without a crystal ball it is nearly impossible to determine with any precision the best place to conceal a knife. The appropriateness of any placement decision won’t be evident until it’s been tested, and by then it might be too late. Unless one intends to carry multiple knives, placement is key. There are several initial factors that influence the placement of a concealed knife, including apparel choices, the specific knife design and the knife’s size.

Certain apparel choices will necessarily influence concealment locations. Skirts, dresses, and snug-fitting clothing limit a woman’s placement options for any concealed weapon. Likewise, certain knife designs will inherently determine where and how those knives must be carried.

A wave knife, for example, is designed so that the hook on the spine of the blade catches on the inside of a pocket when deployed in order to release the blade. In order to deploy the wave knife as designed, it must be carried clipped onto a pocket. An out-the-front knife design may require the sheath to be worn on a belt so that the blade can be released when the knife is drawn. In addition to the influences of apparel choices and knife design, the overall size of a knife may also impact the placement of a knife. Knives that are too long can be difficult to conceal, difficult to draw and may cause physical discomfort. Assuming that apparel choice, knife design and size are not factors needing consideration when concealing a knife, a little common sense provides the framework for proper weapon placement. 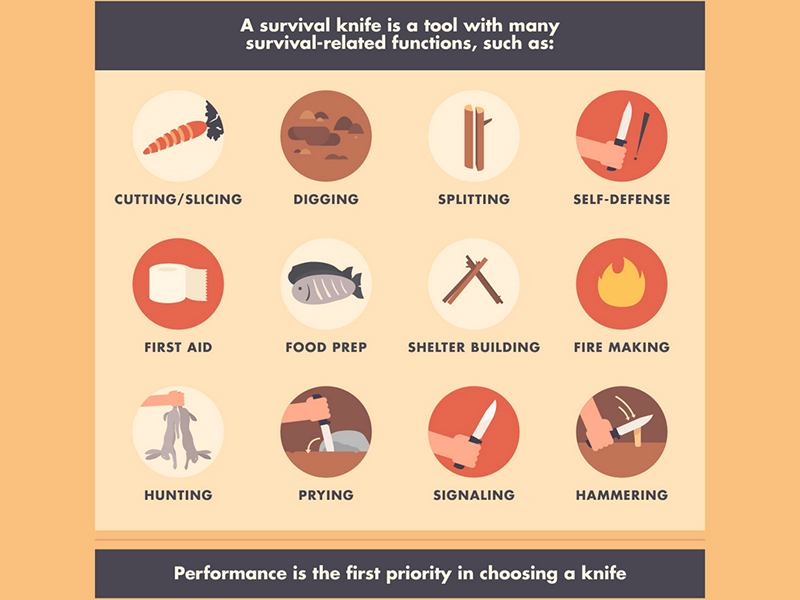 Whenever a weapon is concealed on the body, the main goals for its placement are concealment and accessibility. Assuming that the former goal has been met, the latter will be achieved by choosing positions that limit body movement and clothing barriers. These are the same criteria that are employed with concealed-carry firearms.

Generally speaking, the most natural position for the draw of any weapon is on the strong side. Positioning can include inside or outside the waistband in any position that is comfortable for a strong-side draw. Clipping a knife to a pocket on the strong side can also be an effective location, as can wearing a sheathed knife on a chain around the neck.

Placing a knife inside the waistband is one of the primary locations for carrying it concealed. The benefit of carrying a knife in this manner is that the knife is hidden from view. In addition, the knife remains in a secure position because the sheath can be wedged in between the abdomen and the pants. Selection of a sheath with a belt clip is preferable. Securing the sheath snugly is important because many sheaths are not tight. When one attempts to draw the knife from it, the sheath will dislodge. Carrying a folding knife inside the waistband is typically effective for added retention.

Another location for positioning a concealed knife is outside the waistband, on the dominant side of the body. The position of the knife needs to be such that the strong hand can grasp it with minimal movement. If a knife is carried in this position, it is important that the apparel choice covers the weapon. Also, care must be taken to ensure that, if the knife is a fixed blade, it can be drawn easily from the sheath when needed.

Many times, folding tactical knives need to be clipped to a pant or jacket pocket. There are a couple of potential problems with folding knives carried in a pocket. The pocket is the most common place a knife is typically concealed, so it has to be hidden. But the restrictiveness of the pant pocket may hinder the ability to grasp the knife properly and draw it. One note of caution with folding knives is to be careful not to place them entirely inside a pocket. Loose blades may become ajar or exposed inside the pocket, potentially causing injury to several body parts.

A surprisingly comfortable yet easily concealable and accessible location for placement of a fixed-blade knife for women is by hanging a chain around the neck with a sheath attached. A knife sheath with a belt clip will offer the most comfort and security. When hung around the neck, the belt clip can be attached to the center portion of a bra, and the sheath can be secured between the chest wall and the bra itself. Mimicking the tactics employed by the Lisa Looper Flashbang Holster, carrying a concealed knife in this manner allows for easy access, security and concealment. 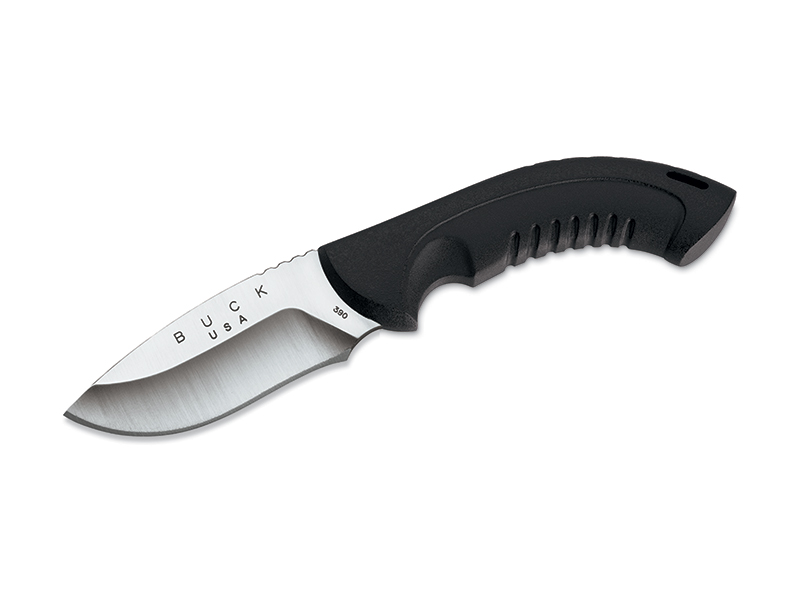 There are many other locations where one may consider carrying a concealed knife, such as in a boot, in a purse or on the support side. These locations may make a good case for a backup knife, but not for the knife acting as the primary tool for self-defense.

Unless multiple knives are going to be concealed in various locations on the body, the decision of where to place a defensive knife is critical.

Garment selection, knife design and knife size impact concealment options. However, the main goals when making a placement decision are to ensure it is hidden from view and that it is accessible with minimal bodily movement and negligible clothing interference. Regardless of where the knife is concealed, make sure to practice the proper draw. An inability to access a knife is no different than being unarmed.

Answer “yes” to these questions when contemplating your concealment location:

This article is from an issue of Survivor’s Edge magazine. Get your subscription at OutdoorGroupStore.com. 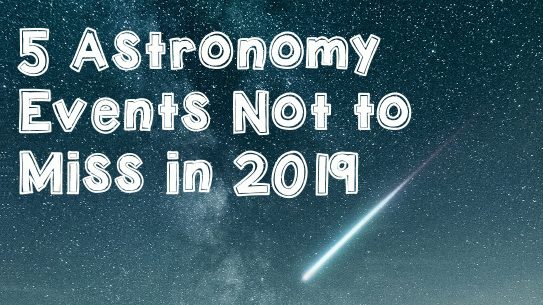 Five Astronomy Events Not to Miss in 2019

The new year will bring several interesting astronomy events that will be visible for...