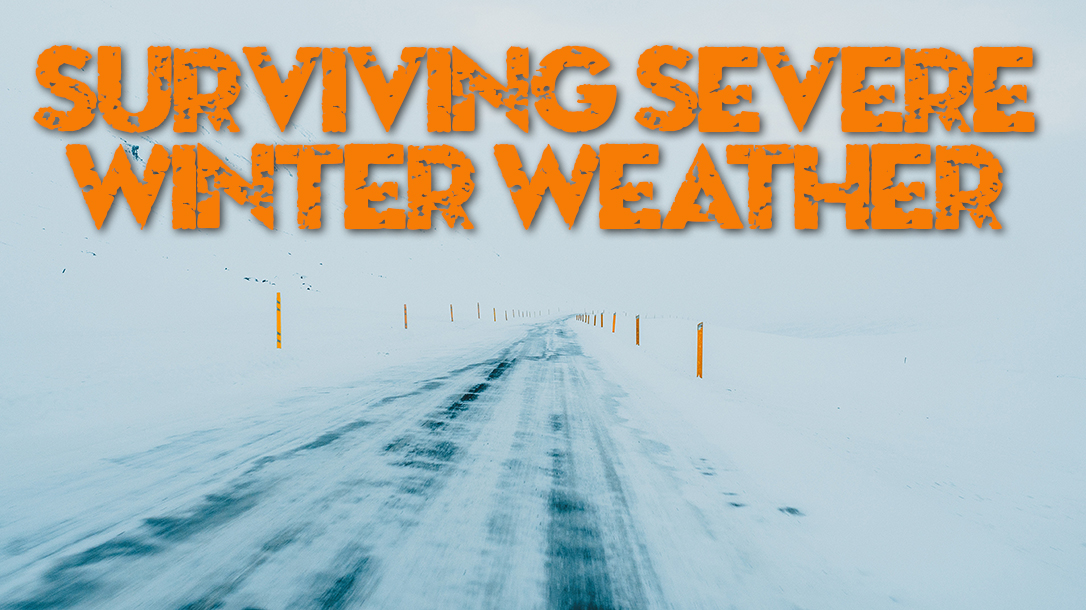 Severe weather events range from snowfalls that make you miss appointments to disruptive blizzards and tornadoes that destroy your entire neighborhood, requiring marshal law and federal aid. So don’t underestimate Mother Nature’s power. Tailor supplies you’ll keep on hand to the events likely to strike in your area.

Having grown up on an island in the Atlantic I’ve experienced numerous hurricanes—ponderous, wet beasts. Because hurricanes can be tracked for days before landfall, I won’t dwell on them. In 2005 Hurricane Katrina taught a dramatic lesson about how federal and state governments perform during a major disaster. Immediately following the huge storm many law enforcement personnel were tending to their families instead of reporting for duty. So, after wind and rain came lawlessness. 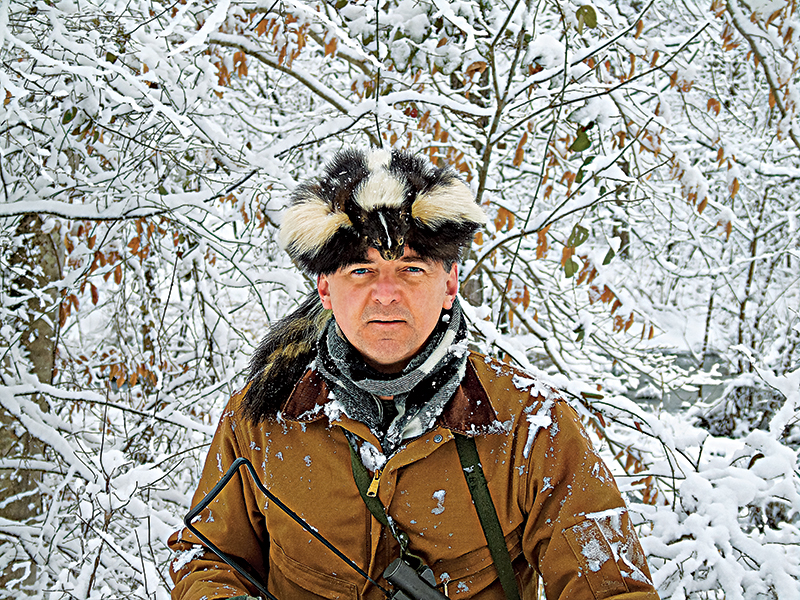 Anyone with a radio, television, internet connection, smart-phone or neighbor knows of an approaching tropical storm or hurricane in advance. Residents also know a hurricane’s name, category, direction, and estimated time of landfall. Flooding is a natural consequence of a hurricane’s torrential rain and storm surge. If you own a small boat, make sure that you can get to it. Keeping it indoors where floodwater can lift it—causing it to stick in the rafters—is a common mistake. Floodwater can be contaminated from sewage and dead animals, so minimize contact and wash with soap and clean water.

Preparation plans for hurricanes can be found online in numerous websites including the Federal Emergency Management Agency, the American Red Cross, and Florida’s Broward County.

Before a hurricane reaches land, pack up your family and drive toward high ground. If you must stay home, preparations include: fueling your vehicle(s), covering glass with plywood, and keeping fire extinguishers, flashlights, extra batteries, food and plenty of water on hand. Don’t forget prescription medications and eyeglasses, ice to cool perishables, candles or LED lanterns, a cellphone charger for your vehicle, battery-operated radio, first-aid kit and fire extinguisher. Having sufficient propane for an outdoor grill is wise and rarely thought of. Electronic garage door openers won’t work during a power outage, so either leave the garage door open or test it manually to make sure that you can lift it. Keep sufficient cash on hand to buy supplies and vehicle fuel—most stores won’t accept credit cards or checks during a power failure. And, stock up on spare batteries for kids’ toys and games to help to maintain your mental health.

Twisters are different and more dangerous than hurricanes because they can develop suddenly into roaring killers, demolishing everything in their path. They can toss trucks like toys and lift houses off foundations. For those living in Tornado Alley, an above or in-ground storm shelter is a responsible investment to protect your family. Only purpose-built storm-shelters can withstand a tornado. In March of 1925, the deadliest tornado occurred in the United States. The Tri-State Tornado killed 695 people, devastating more than 200 miles of Missouri, Indiana and Illinois.

Storm shelters can be viewed and purchased online: Enter “tornado shelters for sale” into a search engine. A variety of prefabricated shelters are available or you can have one built to suit your needs. Most shelter companies are regional, which means some will deliver and help with installation, and some won’t. Determine your budget before shopping. Compare warranties as well as materials, construction, features, price and build quality. If your storm-shelter will double as a safe room, blast shelter, or fallout shelter, the cost will increase. Virtually all storm-shelters have stairs so you’ll need to carry the disabled up and down.

Preparing for a tornado is like preparing for an explosion in your home. Given the few moments you might have before a tornado destroys your home, the most you can do is grab your loved ones and run for your storm shelter. If you don’t have one, and the tornado is howling, take shelter in a basement corner or in a closet or bathroom (preferably one without a window).

If you’re driving during daylight and a tornado overtakes you, try to determine its path and drive at a right angle to it. While a twister’s rotational speed can exceed 200 miles per hour, the ground speed is only a few miles per hour. You’ll know a twister is taking the same path as your vehicle if dust and debris are kicking up behind you. Your instinct will be to accelerate but driving fast may be unnecessary or increase the likelihood of an accident. Drive as fast as conditions permit and turn left or right when you can do so safely. If you’re driving in open country, look for a tunnel, culvert, or ditch to crawl into. Tornadoes have knocked over boxcars so a large one can probably lift your vehicle.

Snow fell for three grey days during Colorado’s blizzard of March 2003. When it happened, my wife and I weren’t adequately prepared. Forecasters said our mountain town would get between a foot and eighteen inches. I awoke to more than a foot of dense snow, which was coming in sideways. I went out, started the snow blower and began clearing the driveway. My wife phoned from Los Angeles where she was working for a week. I told her we were getting some snow.

After working in the house for a couple of hours I looked out and was surprised to see no sign of my morning labor—the wind had erased it. I went out and began again. My vehicle was in the garage so I needed to clear the driveway. After blowing the driveway and shoveling the walk I looked outside again: no sign of my second pass with the machine. Heavy snow continued horizontally. I decided to clear it in the morning.

Morning was no better. More than 2 feet had fallen and more was predicted. According to the latest forecasts we’d get another foot or so. I was preparing dinner when the power failed. I didn’t know it would be out for a week. Lighting both wood stoves, I continued with dinner.

The third dawn was fairly dark. Snow had drifted to more than 6 feet, trapping my car. I was grateful that my wife’s car was in the airport parking structure. There was no sense in shoveling until the snow stopped. I ate a large breakfast and stoked the fires. Strapping on snowshoes, I fumbled in the snow-covered woodpile, making several trips. The big dogs could barely get around.

The fourth dawn broke clear and bright. I donned snowshoes, grabbed the chainsaw and began clearing our road of downed trees so the snowplows could get through. I didn’t know then that two of the three five-ton plows had broken down. We’d received more than 4 feet of tree-breaking snow. I returned home thinking a snowplow would soon come. Still no power. A radio newscaster said that Denver International Airport had closed until further notice—my wife stayed in Los Angeles.

Two days later, our road remained impassible. My wife called saying that the Denver airport was open, and she’d fly in later—I told her to meet me at the post office near home. She asked why. I said I’d explain later. (It was no use trying to describe the snowfall.) I carried her snowshoes and a pair of boots to the post office. We trudged uphill toward our house, and she began to see downed trees and power lines. 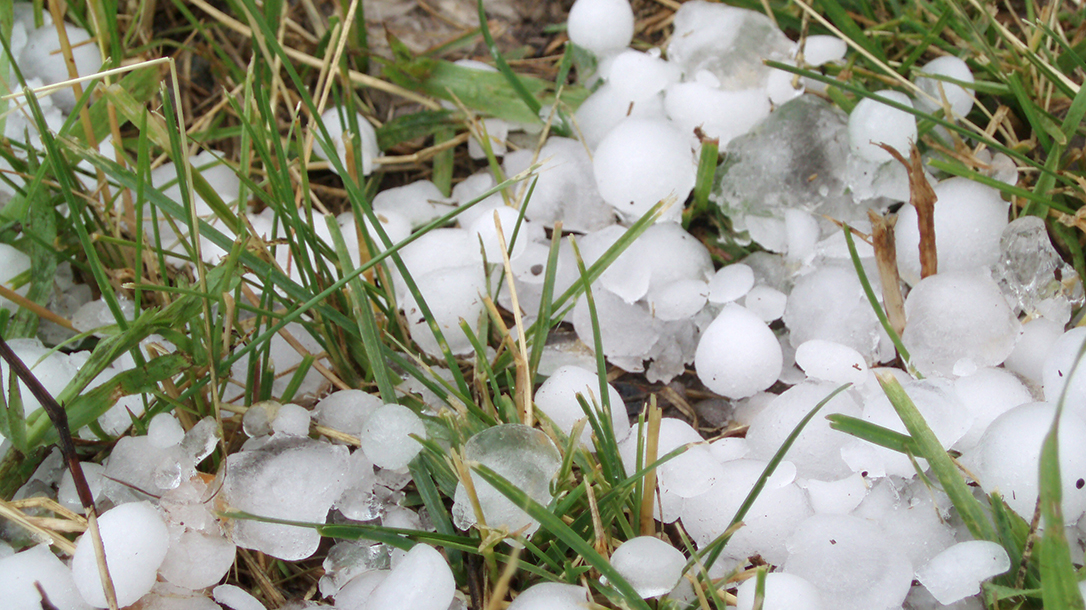 Hailstorm Season is Upon Us: Are You Prepared?

When she saw food from our freezer sitting in snow near our front door, she said we should return to her car and buy a generator. I agreed and put a sled and rope in her car. We bought the last available generator and returned to the post office. We put it on the sled, and I tied the rope around my waist and pulled while my wife, also on snowshoes, helped to push it up our steep driveway. It was great to have power again.

We have since begun storing more gasoline for the generator and other machines. Oversized shelves in the basement hold a large pantry stocked with hundreds of pounds of beans and rice and commercial-sized canned goods. The abandoned cistern became a storehouse for several containers of stabilized gasoline.

We supplemented white-gas lanterns with LED lanterns that run for days on a set of batteries. We bought a used ATV just in case. The chainsaws were upgraded to a heavy-duty models. We bought a manual grain mill and nitrogen-packed hard red winter wheat-berries from which to grind flour. As we discover new products that appear useful, we budget for them. I reveal our lack of adequate preparation before the storm so that you might learn from it and become more self-reliant soon. You can begin by putting survival items in your vehicle today. And, you’ll need to know how to connect a generator safely to your electrical panel.

While relatively rare, ice storms can stop just about everything. The last ice storm I experienced was in Atlanta. I was attending a trade show and staying in a nearby hotel. Coming out of the exhibition hall the deathly quiet was the first thing that struck me. The next thing that struck me was the sidewalk, which hurt as I lay there wondering if any bones were broken. Sliding and slipping to the hotel I saw scores of people in the lobby—stranded locals who slept on the floor that night. Public and private transportation weren’t running because no one in Georgia had tire chains. Having a set of tire chains and a pair of strap-on ice cleats for footwear is prudent. Ice melt makes life easier. Beware of downed power lines, which can be deadly because live ones tend to whip about like deadly snakes.

Lightning can strike without warning and without a cloud in the sky, which is the origin of the saying: a bolt out of the blue. If you hear thunder or see lightning, descend immediately if you’re on a mountain or hill and avoid tall objects like trees, metal fences or water tanks. Insulating yourself from the ground can save your life. Sit on something dry like a rucksack or hay bale. Hug yourself into a tight ball: Bring knees to chest, feet off the ground, and tilt head to knees. Lightning can arc, burning you severely if you leave a gap between your limbs so stay tight. If you have nothing to insulate you, lie flat on the ground, legs together, and arms at sides. If you are near your vehicle enter it, stay in it, and do not touch metal. A vehicle’s rubber tires insulate occupants from lightning.

If you feel your hair standing on end or feel your skin tingling, you’re in danger of being struck. Lie flat immediately. Seldom do people get warning of a lightning strike. If you’re hiking, discard metal objects some distance from your party. If you can take shelter in a shed or house do so. Caves are problematic places to shelter because lightning can arc across the entrance, so stay one body length away from it.

Since severe weather and extreme temperatures can jeopardize your family, keep seasonal items in your vehicle. And, make sure your pantry is wide and deep. Be sure to monitor the situation closely so you can make the best possible decisions to protect your loved ones. 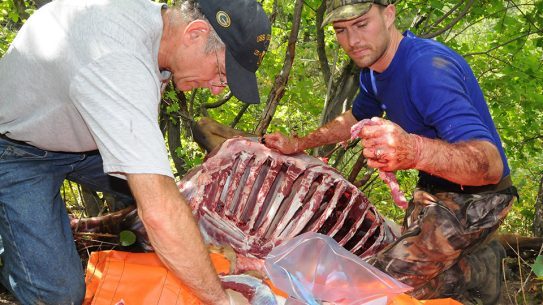 Transporting Your Harvest From Field To Freezer

After a well-placed shot, transporting an elk from where he fell to the freezer...