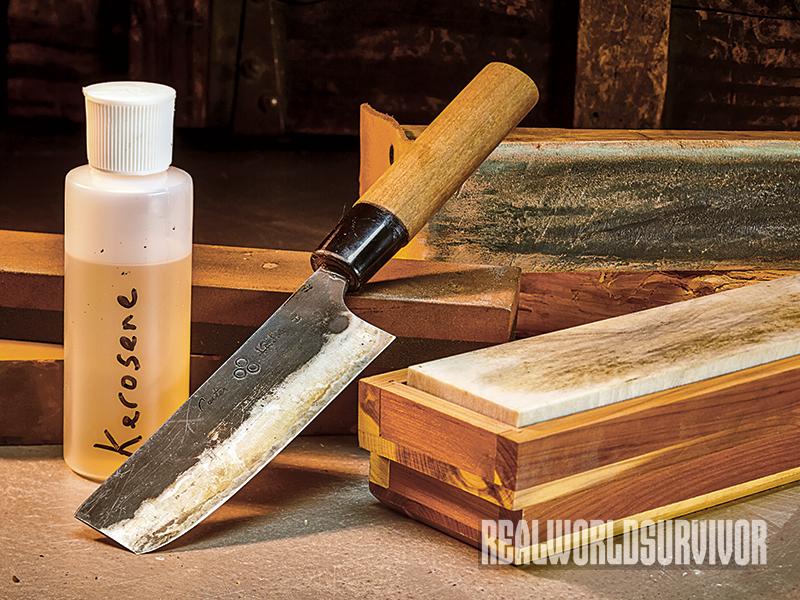 1 of 9
Photo by Steve Woods
Sharpening Solutions: The Ultimate Tool Sharpening Guide
Some of the goods needed to sharpen the Japanese vegetable knife made by Carter Cutlery. L to R: An Arkansas 180-/400-grit combo stone, kerosene, a makeshift leather strop and an Arkansas 2000-grit finishing stone. 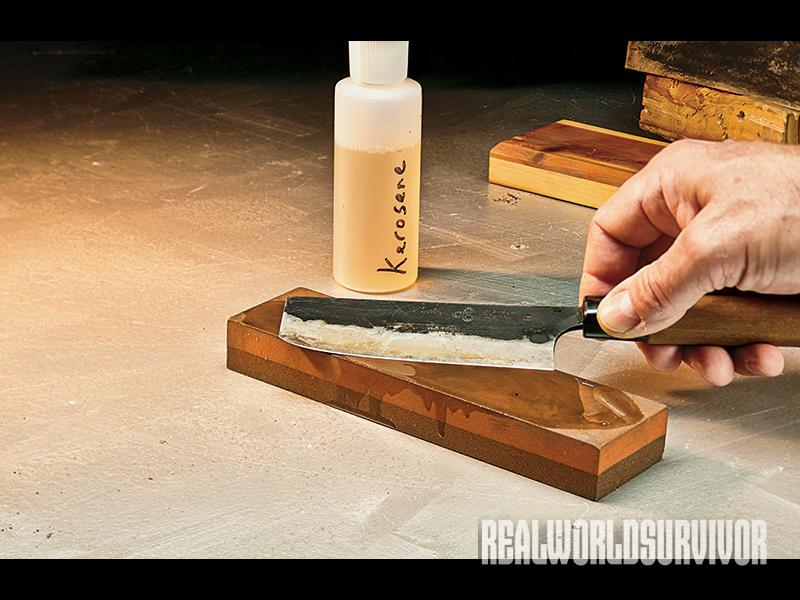 2 of 9
Photo by Steve Woods
Sharpening Solutions: The Ultimate Tool Sharpening Guide
Place a liberal amount of kerosene on your stone. 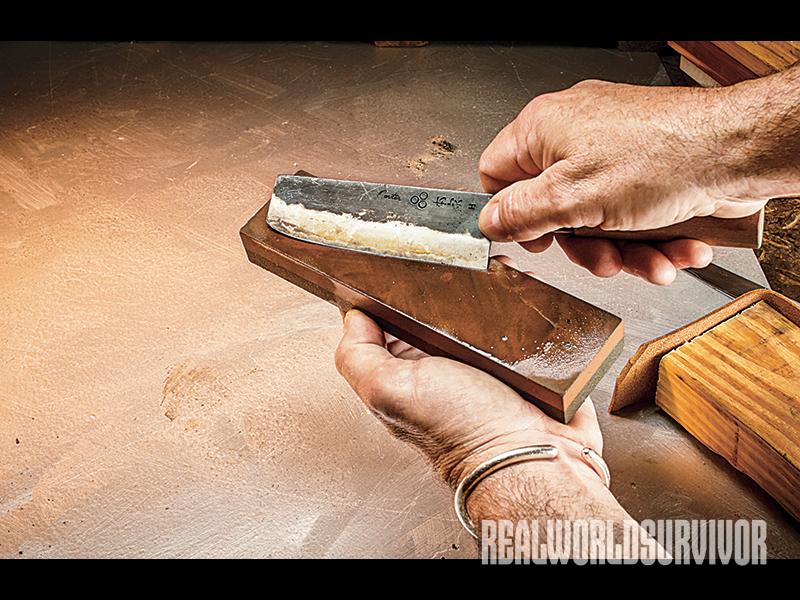 3 of 9
Photo by Steve Woods
Sharpening Solutions: The Ultimate Tool Sharpening Guide
Always try to maintain a 20-degree angle between the blade and the stone. 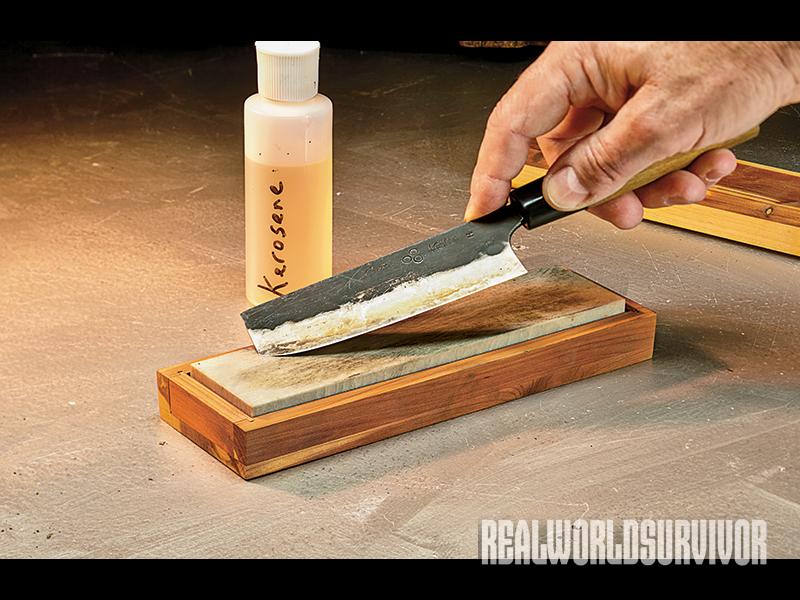 4 of 9
Photo by Steve Woods
Sharpening Solutions: The Ultimate Tool Sharpening Guide
The end of the arc. The pommel end of the knife has risen up in the air as the point is concentrated on, but the bevel angle is still maintained. 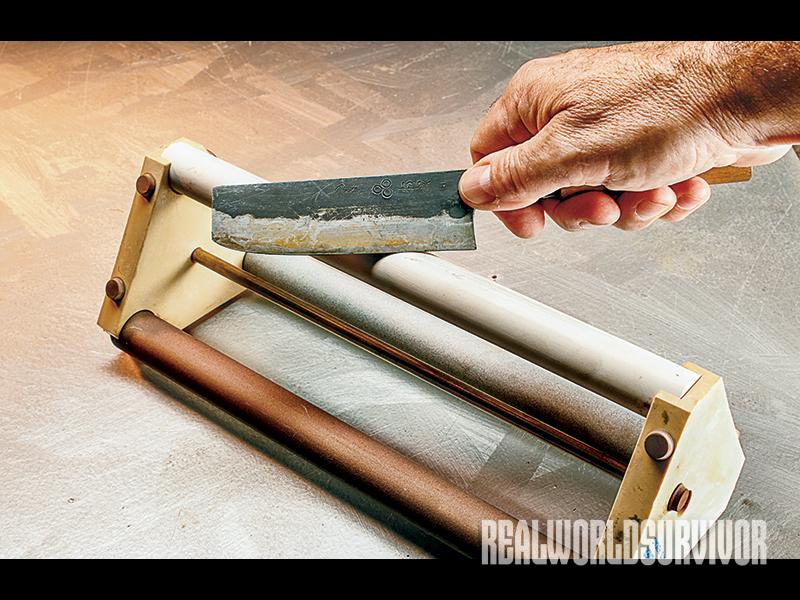 5 of 9
Photo by Steve Woods
Sharpening Solutions: The Ultimate Tool Sharpening Guide
A ceramic rod is being used for a final polish of the blade. 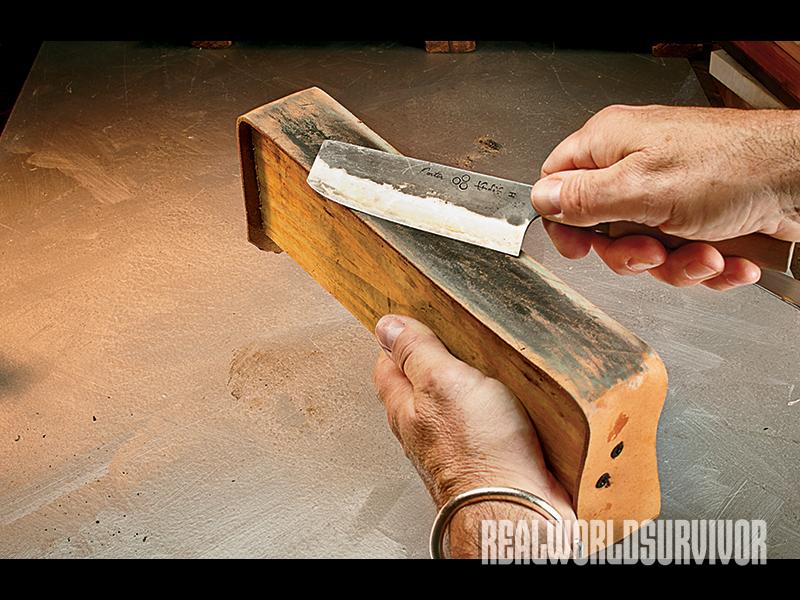 6 of 9
Photo by Steve Woods
Sharpening Solutions: The Ultimate Tool Sharpening Guide
This homemade strop is used to straighten and polish the blades of Texas knifemaker Steve Woods. 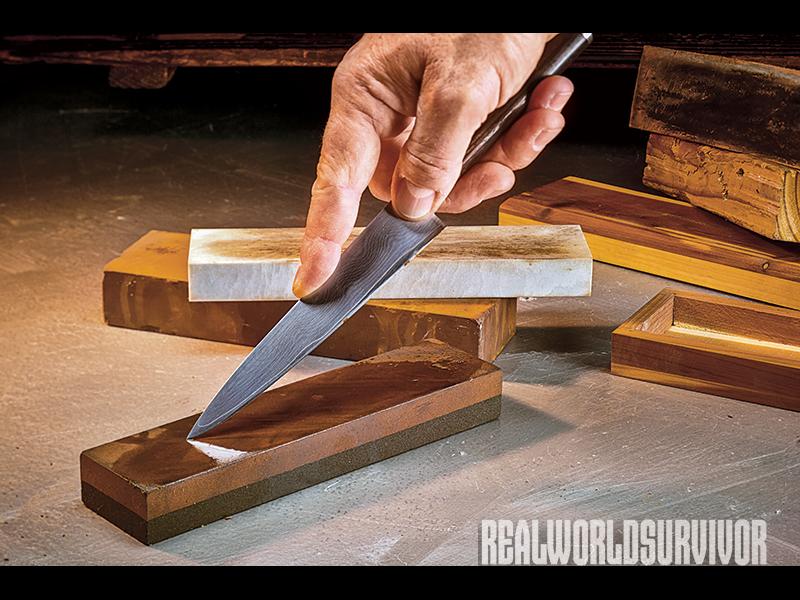 7 of 9
Photo by Steve Woods
Sharpening Solutions: The Ultimate Tool Sharpening Guide
Repointing a knife takes practice. Make this move on each side a few times to restore a damaged point. 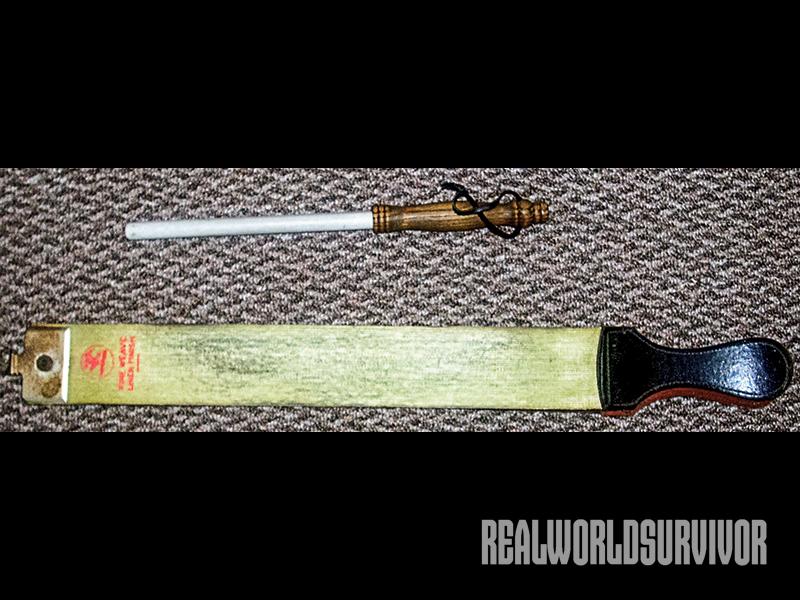 8 of 9
Photo by Steve Woods
Sharpening Solutions: The Ultimate Tool Sharpening Guide
A ceramic rod sharpener with a razor strop showing the canvas strop side that is used first to take off any burrs that could damage the finish on the leather strop side. 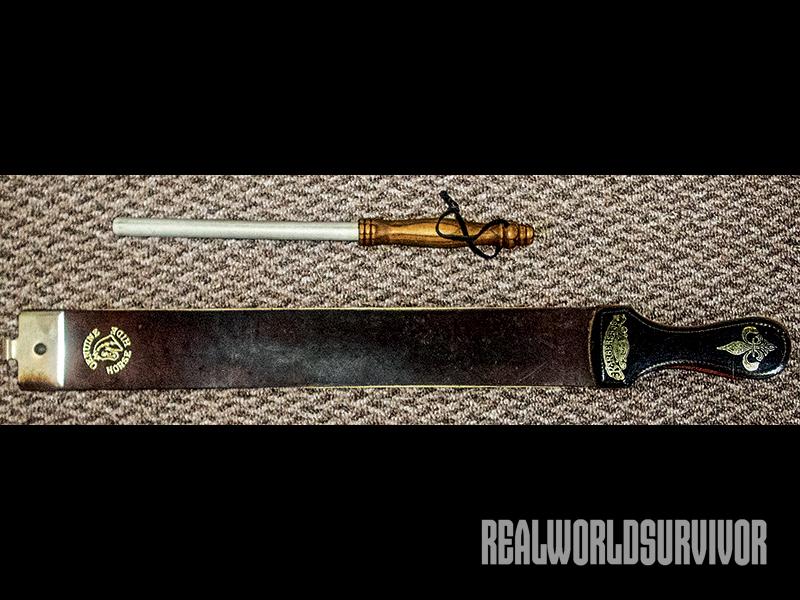 9 of 9
Photo by Steve Woods
Sharpening Solutions: The Ultimate Tool Sharpening Guide
A cheap ceramic rod sharpener and an expensive, leather-only horsehide razor strop. Using a strop is the final step in putting a razor-sharp edge on a blade. 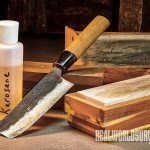 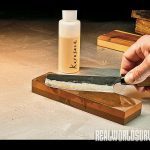 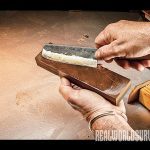 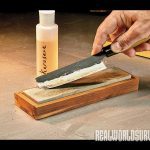 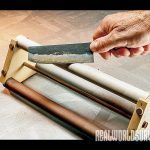 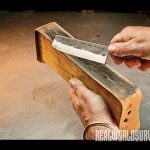 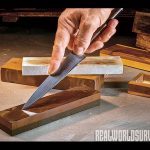 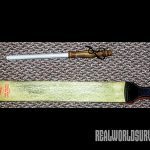 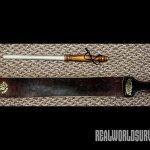 I sharpen roughly 200 knives a year for customers in my blacksmith shop, all of which will shave hairs. There aren’t that many men who have sharpened more knives than I have. What follows is a course in how to learn to being sharpening blades. You must practice the techniques if you are going to master this art.

Sharpening is nothing but setting a bevel on both sides of the edge of the blade that meets in the middle with no flat spots or imperfections. Fine sharpening is nothing more than polishing these bevels and will result in a razor edge that will shave hairs if done properly.

To begin with, you should start with a cold chisel because the bevels on a cold chisel are big enough to see, whereas those on a knife blade are almost microscopic by comparison. You begin by forming the bevels on a coarse-grit stone. They should be even and meet at the center. Now polish that with increasingly finer grits of stone and end with a leather razor strop. If done right, it will shave hairs. The same principles apply to all edged blades and tools.

Tools of the Trade

The tools needed are as follows. A combination 180-grit/360-grit Norton Abrasives India Oilstone, a ceramic rod sharpener and a razor strop. Arkansas stones can be substituted for the ceramic rod sharpener but not for the coarse and medium-grit India oilstones. An Arkansas stone is a finishing stone to polish the edge, not a heavy-cutting, coarse abrasive for creating the edge.

All the real sharpening is done on the coarse, 180-grit India oilstone. Everything else is just polishing the edge. An India Oilstone from Norton Abrasives is used because it lasts longer than any other manmade rock. In my blacksmith shop, I use single-grit stones epoxied to a length of board so I can clamp the board in the vise and really bear down on a dull blade. Don’t try to clamp the stone directly in the vise because it will crack under the pressure.

Contrary to what you may have heard or read, a stone doesn’t have to be perfectly flat to sharpen on it. You control the angle between blade and stone by feel, not by the flatness of the rock.

To begin sharpening, wet the stone with kerosene. Just puddle it on the stone before starting. As you work, the kerosene will become dark with metal and stone bits ground off from the sharpening process. These can clog the pores of the stone and keep it from biting into the steel fully, thus slowing down the sharpening, so wipe the slurry off with a paper towel as needed and apply more kerosene.

The blade is held at a 20-degree angle between the blade and the sharpening stone. To make the full sweep of the curvature of the blade, you must rock the blade slightly to maintain full contact at that angle. You have to learn to do this by feel and not by sight alone. Practice on the cheap 0.99-cent kitchen knife until you no longer are occasionally scratching up the sides of the knife on the whetrock.

To remove chips and nicks, first grind or file the edge flat there, adhering to any desired curvature of the blade before you start sharpening. Now reset the bevels on the coarse stone. If you have a very dull area such as this, you can work the blade in small circles on the stone, taking care to do it evenly on both sides. This removes the most metal the fastest way possible, but it is only for rough work as it is difficult to control this for a fine edge.

Don’t be afraid to put pressure on the knife when rough sharpening on a coarse stone when you have a lot of metal to remove quickly. Do not use a lot of pressure from then on, though, as you can break off the edge as fast as you put it on. Final finishing of the edge is done with a very light touch.

While some people like to cut into the stone when sharpening, I find I have better control pushing the blade away from the edge as I sharpen. With man-made stones, this also makes the whetrocks last longer. I start at the point and push the knife backwards away from the edge while maintaining that constant 20-degree angle between blade and stone. Putting two fingers of the other hand on the back of the blade to steady it and give more control is always a good idea.

Once all the flat spots and imperfections on the edge are ground out, you will feel a fine burr on the opposite side of the blade that you just drew across the rock. When this is consistent down the length of the blade, it is time to clean all the slurry off the knife and the stone before proceeding to the next, finer-grade sharpener.

At this point, all the actual sharpening has been done on the 180-grit stone and everything else is simply polishing that bevel until it is smooth enough to shave hairs.

If you have a damaged knife point, there is a way to put that back on quickly with the 180-grit stone. Sharpen the point in an arc. Begin with the point angled away from you and make a half-circle arc, concentrating on the point. The handle will kick up during this maneuver but the bevel will not be harmed.

Go to the 360-grit stone next and repeat the process, but don’t bear down as hard because you are in the polishing stage now and don’t want to break the edge off. Once you have ground out the 180-grit scratches and gotten the burr up again, it’s time to clean up and go to the next stage.

When sharpening professionally, I usually go to a cheap ceramic rod sharpener next. It is used like a butcher’s steel. Hold the rod up and cut into it while maintaining that all-important 20-degree angle between blade and sharpener. This will soon give a shaving edge.

A lot of people like to use the expensive Arkansas stones. For the record, these are all mined by Norton Abrasives and then sold to companies that sell them under their own name. If you want to use them instead of the ceramic rod, then go ahead.

The final step is the razor strop. Keep the same 20-degree angle as before and don’t start slapping the strop wildly. Keep a nice smooth, controlled stroke while maintaining that all-important 20-degree angle between blade and strop all along the curvature of the strop. The finish is what you pay for on a razor strop and it can be replenished by rubbing a small quantity of lanolin into the surface periodically.

To protect that finish, you don’t start with the leather part of the strop—you begin with the canvas strop attached to it. This is to knock off any burrs that could permanently damage the leather strop’s finish. Some people even use the rough side of a leather-only strop next as an extra precaution. The smooth leather side is used only when you are sure that the edge is ready for it. There is only one thing else to do to become a master sharpener. Like any other great skill, you need to practice to keep honing your craft.

This article was originally published in The NEW PIONEER™. Subscription is available in print and digital editions here. 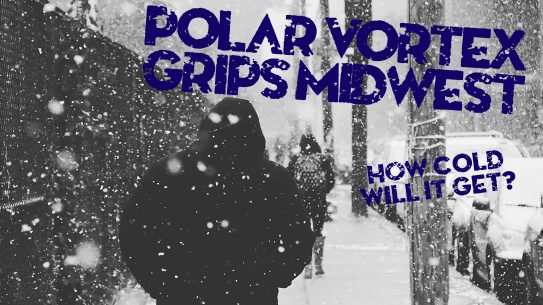 Polar Vortex Will Trigger the Coldest Weather in 20 Years

Some Midwest cities this week will be colder than Antarctica and Alaska as a...