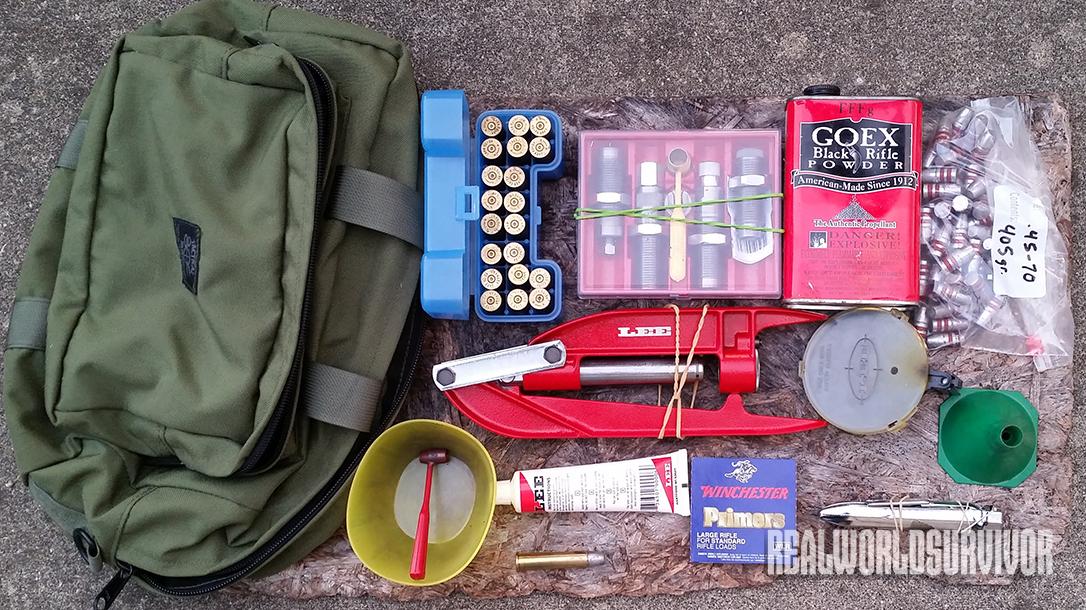 Whatever survival scenario you end up in, you’re going to need firearms and ammunition to go with them. There is still a shortage of factory cartridges, and this scarcity will become critical during a disaster, so be prepared. Many dedicated shooters and preppers have solid stockpiles of ammunition. This is a good thing. That said, it’s also good to be able to use components you already have, such as cartridge brass. Some of the guns you own might be chambered for obsolete or hard-to-find cartridges. As factory ammunition stocks get low, finding practice ammunition will be a problem. In the end, you’ll have to do what you have to do to get ammunition, which is where handloading comes in.

I’ve been handloading for 44 years and still have my old, single-stage press as well as a progressive press that I use for loading larger amounts. I have a respectable stock of mostly once-fired brass, lead bullets, primers and various brands and types of gunpowder. The presses are mounted on a heavy-duty loading bench, which is just fine for handloading here at home, but what if I need mobile handloading capabilities? 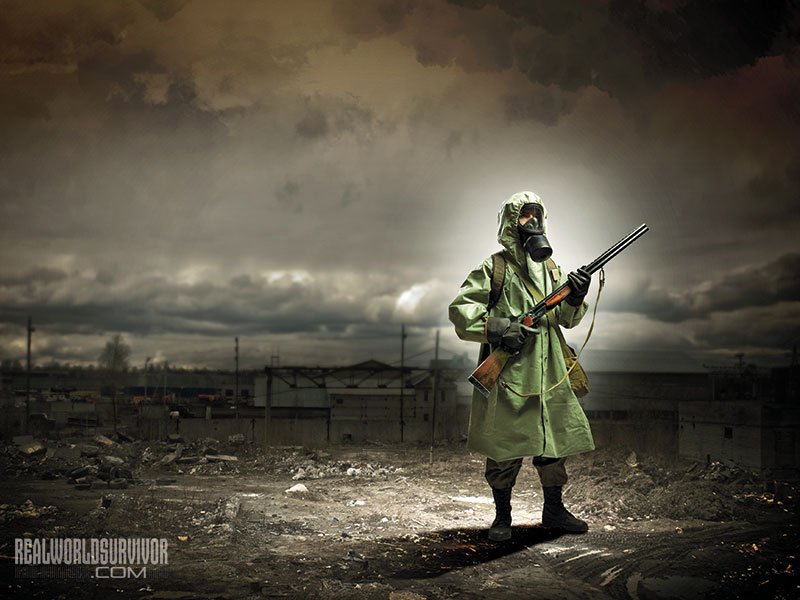 This led me to think of the Old West buffalo hunters, who often used portable reloading tools in the field for their big-bore rifles made by Remington, Sharps, Winchester and others. In the mid-1880s, there was the Ideal Reloading Tool, which looked like an oversized set of wire pliers. This handy gadget morphed into the Lyman 310 tool, which later added interchangeable dies for the various loading processes. I wanted something fairly small and lightweight but that still had plenty of “oomph” for resizing any kind of empty brass.

For this particular application, I selected the 145-year-old .45-70 cartridge once used by the military, buffalo hunters and other denizens of the Old West. It’s both powerful and versatile, and I can tailor the load to my needs by handloading and end up with a cartridge that will take anything from rabbits to grizzly bears. While I was conducting my research, I spotted a product from Lee Precision that I didn’t even know existed: the Lee Hand Press. This device looks a lot like the old Lyman tool, but more robust. The makers claim it will load the largest magnum cartridges, so it sounded like just the ticket for the .45-70 cartridge.

I put in an order for the Lee Hand Press and got it in kit form, which included a Breech Lock Quick Change Bushing, a set of .45-70 dies, a shell holder, powder dipper and instruction manual. The Lee engineer I’d talked to also recommended a separate Lee Factory Crimp Die that would ensure a good crimp on the bullets because I was using the cartridges in a lever-action rifle with a tubular magazine. Bullets that are too lightly crimped can get pushed back into the cases under the spring pressure in a magazine and cause some gnarly problems. My new press weighs just 1.75 pounds and is 11.5 inches long, which enables it to accept cartridges with an overall length of 3.65 inches. It’s compact and light but has plenty of leverage.

I checked to see what was in my reloading stockpile and found a military ammo can full of .45-70 brass, so I had no problems there. I also found standard-pressure, large rifle primers from CCI and Winchester and some of the best gunpowder for .45-70 reloads, the Alliant Reloder 7 and Hodgdon H4198, both of which have outstanding pressure-to-velocity ratios for this cartridge. Next, I figured out what powder charge I’d use for each handload and then matched those loads to the load data in the manual for the Lee Powder Dipper. I didn’t use a balance beam or digital scale because it’s not likely you’d have one in a survival situation.

A powder funnel comes in handy when you drop charges into the empty case. I went with the optional Auto-Prime tool available with the Lee Hand Press. It’s convenient and lightweight, and it uses a thumb-lever to seat the primer. Lee’s .45-70 dies didn’t have a carbide-sizing die, so I needed some case lube for the cartridge cases to prevent them from sticking in the die. One thing I didn’t have was bullets, so I ordered hard-cast, flat-point, 405-grain models.

Once you’ve gathered everything you need, then RTFM—Read the Freaking Manual. I read it even though I’m experienced at handloading. You should start with clean brass and lube the cases with your case lube. Use a very thin film so you don’t dent the brass in the die. Following the manual instructions, screw in your sizing die, which also serves as a decapper to punch out the used primer. The spent primers fall down inside the hollow ram, so make sure you empty it after 20 cases. Place the lever that moves the ram against your pectoral muscle and move the other lever toward you to push the brass up into the sizing die; now, use both hands to lower the levers and remove the newly sized and decapped case.

You have to set up the Auto-Prime tool for large-sized primers, and the primer tray will easily hold 50 primers. Feed the cases one at a time into the shell holder on the Auto-Prime and use your thumb to press the lever, which acts on a small ram, and push the primer into the primer pocket. Make sure the primer is flush with the base of the case, especially on revolver cartridges. If you use the case several times, you might have to clean out the debris in the primer pocket, but there’s a tool for that, too.

Replace the sizing die with the expanding die and position it properly. You want to expand the case mouth just enough to enable you to place the base of the bullet into the mouth of the case. Don’t “bell” the case mouth excessively or you’ll reduce the number of times you can reload the case before it splits. The top of the Lee die acts as a funnel, so you can drop the powder charge at this stage if you want.

Gunpowder and bullet companies offer books and pamphlets on how much powder to use for a particular load. Start with the minimum recommended load and work your way up so you can find the load that does what you need it to do and functions best in your firearm. It’s critical that you pay close attention while you’re charging the cases, because if the gunpowder amount isn’t exact, it can lead to serious consequences. 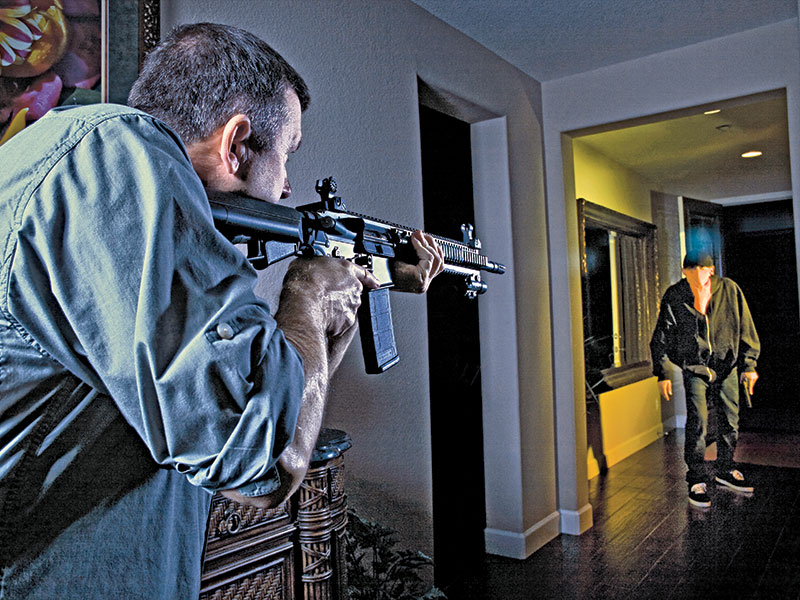 Survival Cartridges: Versatile Ammo For Your Bug Out Arsenal

The cases/brass will be base down at this point, so you can add the gunpowder, but make sure you double-check for cases that might have no powder or a double charge. I marked the inside of my Lee Powder Dipper with a permanent marker to show where my powder levels should be for the required charges. Handloading is a slow process, and it’s better to be off by a grain or two fewer than a grain or two more.

Next, use the die that seats the bullet in the case; follow the instructions and work it by small increments, taking care not to push the bullet too far into the case. Since I used a factory crimp die, I only needed the seating die to insert the bullet into the case, not to crimp it. These bullets have a well-defined crimping groove, so I seated them where the groove was even with the case mouth. Once I seated all of bullets, I replaced the seating die with the factory crimp die, set it up according to the directions and put a good, firm crimp on all the cases. I ran a representative amount through my Henry rifle’s action and they fed, chambered and ejected just fine.

Put Handloading To The Test

I put together a survival reloading kit in an OD green nylon bag that had two compartments with zippered closes and carry straps. Included are the necessary items to make a completed cartridge: the Lee Hand Press, dies, Auto-Prime tool, case lube, powder, primers, bullets, cartridge cases, powder dippers and a small plastic bowl. I felt 20 cases would be good for survival hunting, and they could be used over and over until they split. The entire package weighed just 9.125 pounds.

I set out for the range with my handloads and Henry, and as soon as I arrived I set up my Oehler Model 35P chronograph to see what kind of velocities my loads would produce. This black-powder load is a carbine type that cavalry troopers used in their Springfield Trapdoor carbines to reduce recoil. One of my smokeless powder loads was also reduced velocity, which would work on small- to medium-sized game. The last load was a bit stronger and would work well on larger game and for personal defense since it had a calculated figure of 1,676 foot-pounds of muzzle energy.

I shot the handloads from the bench using a sandbag rest at distances of 25 and 75 yards. With one exception, all the deer, wild boar and other game I’ve taken have been within this distance, and this is certainly within the norm for defense use. My best group at 25 yards would have been 0.58 inches with the Reloader 7 load, but a flyer opened it up to 1.24 inches. My best group—and the one that shot to point of aim—had the highest-velocity load.

At 75 yards, I used a bigger target with an orange aiming point, which I could barely see, and my best group was the Reloader 7 load with a five-shot cluster that measured 2.79 inches. For more practical shooting, I set up a white-tailed deer target at 50 yards and shot at it using a tree for a rest. I hadn’t shot at 50 yards, so my first shot went high with a black powder load, but the rest were in the boiler room.

In the final analysis, everything worked. My handloads produced no malfunctions, and there were no pressure signs, like flattened or cratered primers. The bullets stayed put in the cases, and accuracy was all I could ask for given my working parameters. The rifle and loads would certainly hit a 4-inch-diameter deer heart at 75 yards. And since my survival reloading kit is lightweight and portable, I’ll definitely be including it in my go bag, where it will be ready when I need it.

This article is from the winter 2019 issue of American Frontiersman Magazine. Grab your copy at OutdoorGroupStore.com. 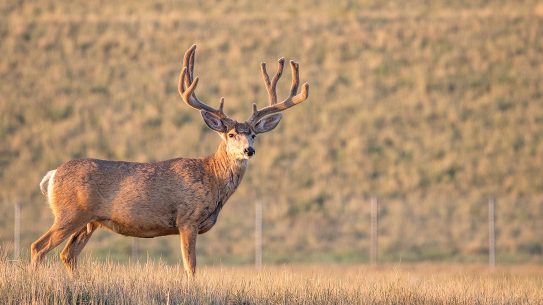 The Best Ways to Preserve Your Field Trophies for Taxidermy

Hunters blame the taxidermist for mounting problems when those issues were created in the...