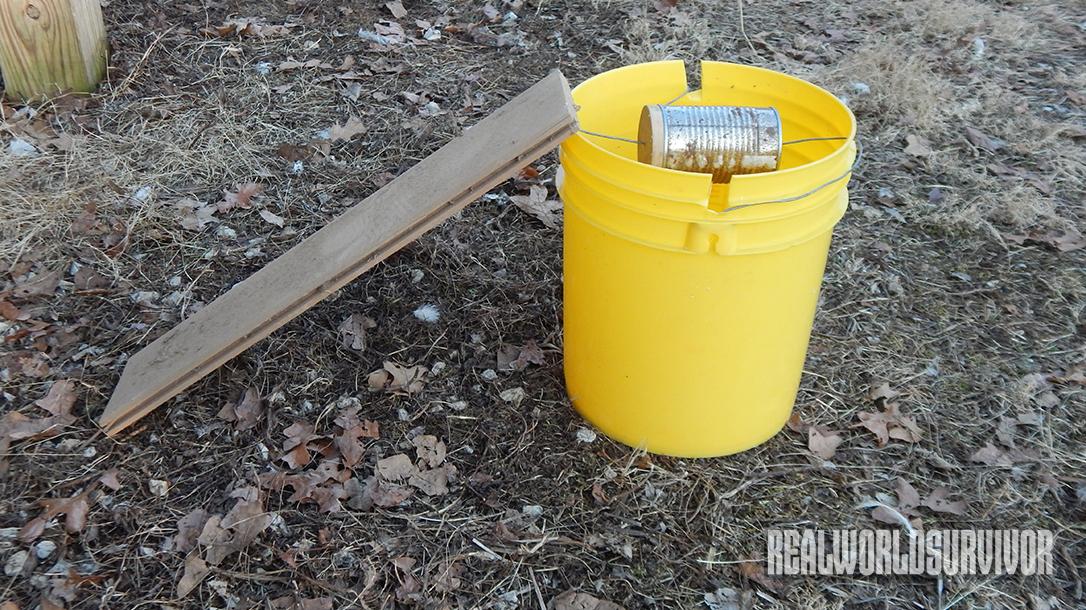 If you are a homesteader, you already know the immense value of 5-gallon plastic buckets. You probably have more of these laying around your place than you like to admit in public gatherings. Their uses are seemingly endless; from hauling all manner of stuff to storing all sorts of things. A bucket trap is incredibly useful for dealing with pests of many shapes and sizes. Here are some of my favorite 5-gallon bucket pest and predator reduction projects. All are low cost and generally highly effective. 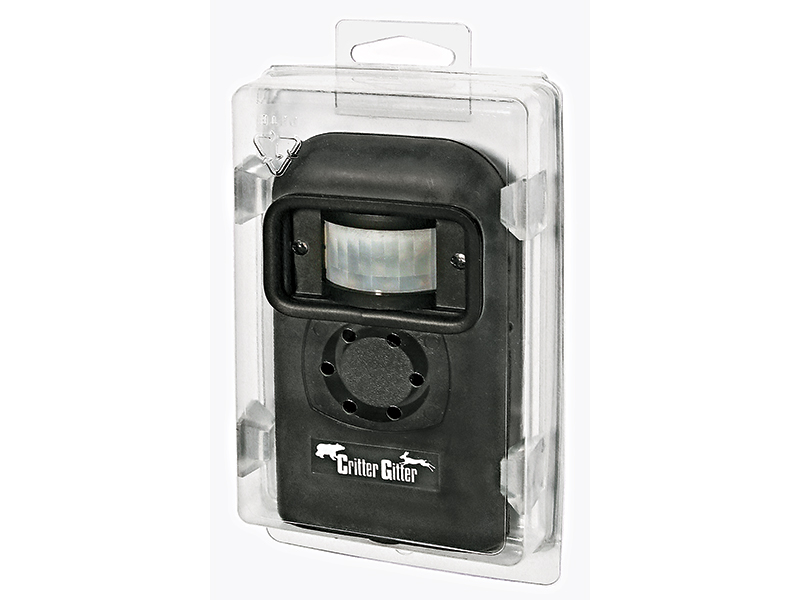 The Critter Gitter Keeps Pests Out

To help control mosquitoes, some homesteaders have success filling a few 5-gallon buckets three quarters of the way full and adding six or so guppies to each bucket. Guppies and goldfish are inexpensive to purchase and to keep. Fish food doesn’t cost much and once the buckets are established, a fair bit of their food should come from insects and their offspring. Mosquitoes, once the weather is warm enough, will come along and lay eggs in the buckets that the guppies will eat.

You will need to offer some occasional fish food, either bought or homegrown, such as duckweed or similar nutritious fish fodder. Also, if the buckets begin to develop algae or other issues, move the fish to a new bucket and clean the old one thoroughly.

If you have cats, they may give the bucket grief and try to catch the fish inside. This can be dealt with by obstructing their access via a lid with holes large enough for mosquitoes, but not for the cats to catch the fish. This system works best if the mosquitoes don’t have lots of other standing water options where they can lay eggs. If you do have other sources of standing water, adding some guppies to these areas as well isn’t a bad idea provided they stay wet for longer periods of time or all season.

I used to fill 5-gallon buckets with grounds from the coffee shops in town. Coffee grounds are great for compost making and soil building, among other purposes. Sometimes, the loads were so large that we didn’t get around to dumping the buckets out for a number of days. What we found when we finally did dump them was nothing short of magic: the buckets would often be crawling with hundreds of fly maggots.

We would dump the bucket traps in our compost field chicken yard, where the chickens would ravenously enjoy a fly maggot feast. Often, if left long enough, the buckets would produce lots of larger, black soldier fly larvae. These are an amazing source of supplemental feed for many homestead animals, and the buckets could be used to start a BSL (black solider fly larvae) composting system quite easily. [Ed. Note: “Maggot” is a non-technical term that applies to larvae from various fly families. BSL belong to the family Stratiomyidae.]

Drill 3/8-inch holes in the bottom, sides, and lid of a bucket. Add a few inches of some coarse, high carbon material such as wood chips. Then add the food source, perhaps fish guts, an animal carcass, or something else that is attractive to flies. Add more carbon on the sides and on top to help dampen smells and absorb any liquids that the attractant and flies create. Hang the bucket in an appropriate spot that pest animals like raccoons and possums cannot access but where your flock will definitely find it.

In a few days, flies will have colonized the feeding medium, and in a few more, maggots will start dropping from the bucket like flies. Make sure the bucket hangs in a place where your flock will easily find and make short work of the food. Under the bucket I put about 6 inches of bedding material—wood chips and sawdust, which the chickens turn to find any maggots they missed.

There are a few caveats with this method. First, if the feed in the bucket trap is old or bad, it can possibly give the animals that eat the maggots botulism, which is fatal for chickens and other fowl. Second, it can be super smelly. Even with a lot of added carbon, it can waft a long way, upsetting wives and neighbors. A number of my homesteader friends love this idea and have had great success with it. A few ran into problems similar to Harvey, where animals became sick and died from botulism. So, if you try this method, exercise caution, especially in choosing the feeding medium.

Mice can become an incredible pain on the homestead. They can be quite dangerous, chewing on wires and even causing fires and or spreading disease. They are also an important part of the ecosystem. But, like ants, they sometimes take up residence in places we don’t want them, and given their great numbers, removing them in unwanted places does no real harm to their numbers and role in creation.

Snap and sticky traps can help, but I have found no setup as effective at large scale mouse extermination as the bucket trap. Our first iteration of these traps was made with heavy duty coat hanger metal, a standard metal can with lid intact, and a 5-gallon bucket. Using a drill bit about the same size or only slightly larger than your rod or wire, drill two holes on opposite sides of the bucket about a 1/3 of an inch from the top.  Slide the can onto your wire, and then side and secure the wire through the holes on each side.

“You will need a way to allow mice to get up to the bucket, so we used some scrap 1x4s as ramps. These worked well, but a friend helped me upgrade to our new model: a heavy duty piece of round metal, a can with a wooden dowel in the opened side instead of the partially removed lid, and the same type bucket. This one spins much better and doesn’t tend to get out of alignment like our earlier version, where the can would slide over time towards one side of the bucket, until eventually, the can didn’t spin at all and thus the mice had free peanut butter.

For bait, peanut butter or a similar, sticky, attractive substance is best. Spread it on the sides of the can so that the mice lean over trying to reach and find the bottom of the bucket below. Once trapped, you have a few options. Some fill the bottom few inches with water to ensure a quick death. Others will feed the mice to other creatures, such as cats or pet snakes. Whatever you do with your captured critters, you will significantly knock back their population in unwanted areas with just a few of these traps in no time flat. 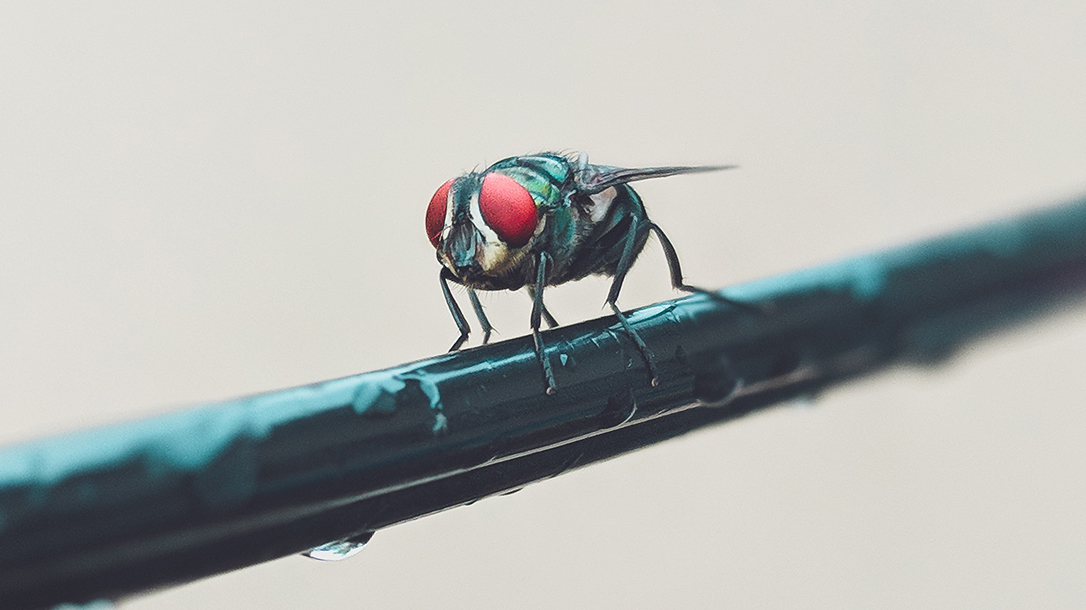 Whenever possible, I try to deter and defend against large predators instead of having to deal with them in a more permanent fashion. Unfortunately, sometimes no amount of persuasion will keep a raccoon or possum from continually entering unwanted places. At this point, it is time to take action against the invader. Some people hunt these animals, but since they are mainly nocturnal, if you have five kids like I do, losing more sleep is not an appealing option.

A bucket set with a 220 conibear trap and some appropriate bait is a very effective solution in this situation. The only work you need to do is to cut two or so-inch deep and about 1/2-inch wide slots for the trap to sit in on opposite edges of the bucket’s rim. The bucket lays on its side, with the trap sitting just inside its mouth. Bait goes in the very back. Years ago, we had a tremendous amount of predator pressure on our laying flock. In the course of 12 days, this trap setup eliminated nine predators that were not just pilfering our poultry, but also damaging our out-structures in their desperation to gain access to the animals within.

There are a few tips to have success with these traps. First, the bucket and trap shouldn’t smell like a human. So you need to handle them with old farm work clothes and gloves and use an older, used bucket. Some people purchase scent to apply to the trap and bucket, but I have never done so and still had tremendous success just exercising care and common sense. Wear old work gloves.

The traps need to be either pegged into the ground (they come with a chain for this purpose), or if the ground isn’t hard enough to hold the trap with a thrashing, small or medium sized animal, secure it with some additional chain and a concrete block. This prevents a caught animal from running off with the trap and kicking the bucket into an unknown place that you later run over with a lawnmower, tractor, or other piece of equipment.

Some may say it is better to live trap and relocate larger predators, but I don’t want my predator to become someone else’s problem. Also, humans are now the top-line predator in many ecosystems. We are just filling the role that other, large animals used to before their numbers dwindled.

If you have animals that may try to get the goodies inside the trap, you either need to train or exclude them from the areas where traps are set or take down the traps during the day when your animals are out and about. These traps will take out a chicken, cat, or other animal just as quickly as a raccoon, possum, or other predator. Kids should also be given a first hand demonstration of the danger these traps are to creatures of all kinds, their kind included. I use a thick stick, first letting them try to break it, and then setting the trap off with it, demonstrating just how powerful and easily the trap will crush things.

Our favorite bait is normally a bit of peanut butter spread on a chunk of banana.

This article is from the fall 2018 issue of The New Pioneer Magazine. Grab your copy at OutdoorGroupStore.com. 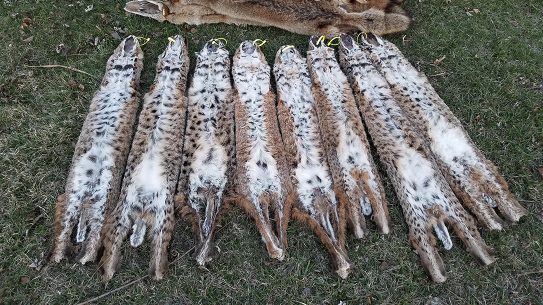 Putting Up Fur: Don’t Let Anything Go to Waste

Putting up fur is an art and a legacy for some. It’s hard work,...