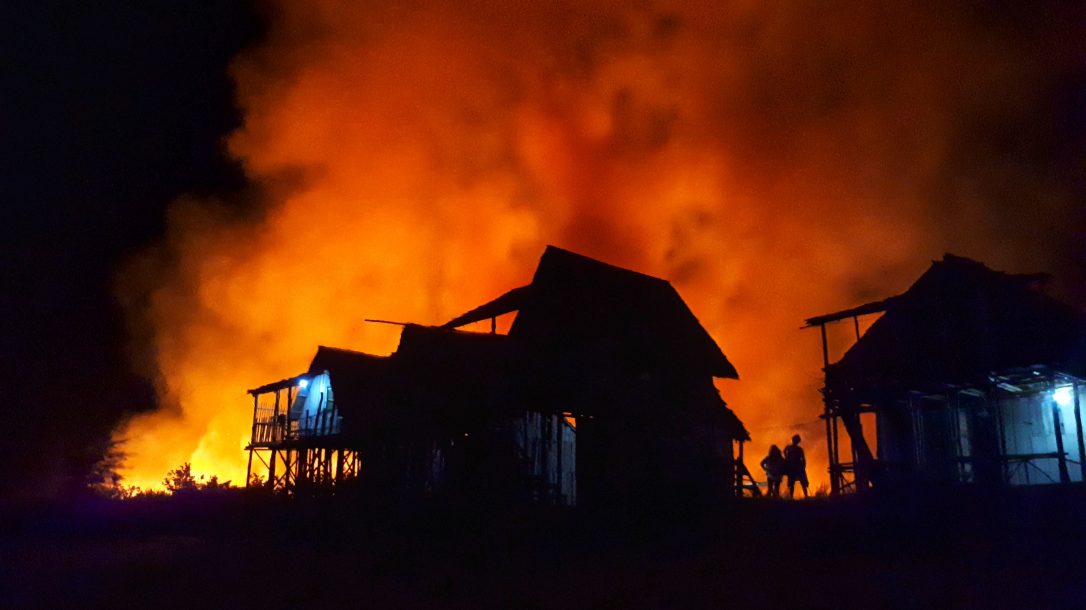 They should have left at the first whiff of smoke. But it was late in the evening, and John and Jan Pascoe thought it would be safe to stay in their Santa Rosa, California home until an official evacuation notice was issued. Instead, the pair piled a few prized possessions into their cars so they would be ready to go at a moment’s notice. Then they went to bed. When Jan awoke just hours later, the fire was on top of them, and they didn’t realize they have a story of survival to tell.

“I looked out the window,” she said of the scene around midnight, “and all I saw was a red glow.” Jan quickly woke up her husband and the two ran for the cars. Driving as fast as they could, they tried one exit route after another, but fire blocked them in all directions. With nowhere to go but back, the Pascoes headed for the only place that had any chance of protecting them from the fire’s fury: their neighbor’s pool. The fire was closing in fast by the time they got there, but they waited until the last minute–when the large tree next to the pool went up in flames–to jump in.

The icy cold of the water would prove nearly as deadly as the inferno blazing around them. “I kept saying, ‘How long does it take for a house to burn down?’” said Jan, “We were freezing.” Outside the pool, temperatures soared: Jan’s phone, right next to the water’s edge, melted into her shoe.

When the two came up for air, they used their shirts to protect their heads from the flaming debris falling all around them. It would take six hours for the fire to extinguish, leaving behind a charred and lifeless landscape. But the Pascoes had survived. “We held hands,” John said, “and walked out.” 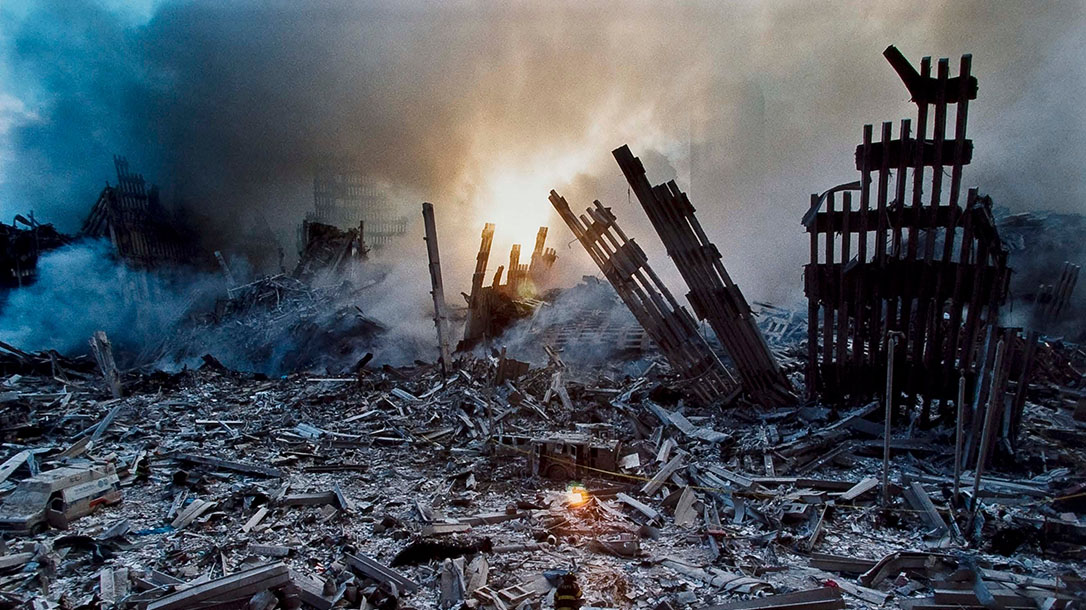 iSurvived Special: Will Jimeno Decided He Would Survive September 11

Lillian Germond of Seattle thought she was holding the door for a neighbor. After a long night of waitressing, she was headed home to the apartment she shared with her boyfriend. “I was about to try and get my key out when this guy came straight for me and I realized he had a machete,” Germond said. The man shouted “don’t (expletive) move,” pinning Germond against her apartment door. Germond at first tried to give the attacker her purse, but when she was rebuffed she realized just how much danger she was in. “OK,” she thought, “here we go. It’s either fight or die.”

Falling back on a decade of martial arts experience, Germond made a grab for the machete, catching the assailant off-guard, while shouting for her boyfriend inside the apartment. The attacker, realizing he was moments away from being outnumbered, turned to run away. But Germond had other ideas: “I didn’t want him to do this to someone else.” She pulled on the back of his jacket and swung her arm around his neck, causing them both to lose their balance and fall down the front steps.

By the time her boyfriend arrived on the scene, the attacker was biting Germond in a desperate last-ditch attempt to get away. But the two held him down until the police arrived. “I’m almost in tears when I talk about her, not because I’m sad but because I’m proud,” said Germond’s father, a former tactical commander with the State of California, “she’s a warrior woman.”

It was a dream come true for Todd Pilgrim.  While hunting near a remote airport strip deep in the Yukon, he spotted a bison, something he had been trying to bag for 14 years. From the edge of Airport Lake, Pilgrim took a shot with his .338 Remington Ultra Magnum rifle, hitting the 1,400-pound animal, followed by two more shots. But the bullets seemed to have no effect.

“The bison just casually walked off the air strip and into the woods,” Pilgrim recalled. But when he got closer to where the bison had stood, he saw a trail of blood that proved how deadly his aim had been. After giving the injured animal a 20 minute lead, he headed into the forest. More signs of blood, and crushed vegetation where the animal had rested from its injuries, made it clear that Pilgrim was getting close. But the bison had other plans. “I turned to my left and big horns to the head just took me out,” he said.

When he came to after the ambush, Pilgrim was disoriented and had trouble breathing. That was because a bison was sitting on his chest. “It came to me, ’Oh my God, I’ve been attacked by the biggest land mammal in North America.’” But the bison wasn’t finished with Pilgrim. It began to stomp its feet, angling for the hunter pinned beneath him. To save himself, Pilgrim grabbed the fur underneath the bison’s belly and held on for dear life. Somehow, in the midst of the bison’s attack, he was able to slip out from underneath the massive animal. That was when the bison charged.

“He came right after me,” said Pilgrim, “We’re playing zigzag. I go one way, he goes another.” But Pilgrim took cover behind a tree, shifting his position each time the massive animal tried to maneuver into position to renew his attack. “He didn’t move that fast because they’re so big.”

Eventually, the bison, injured and worn down from repeatedly circling Pilgrim, stopped to rest. Pilgrim used the opportunity to grab his rifle and take his final shot. This time, the bison went down. “And then you know what I did? I threw my gun down on the ground and I went over and gave him a big hug,” he said. “He was only trying to defend himself. He knew I was going to kill him so he was going to let me have it.” Pilgrim was taken to a nearby hospital to be treated for a concussion and injuries to his shoulders, ribs, and back.

Story of Survival: The Perfect Storm

For Nathan Mitchell, it was the start of a no good, very bad day. He had made time in his schedule to get out on a mid-October day hike in Mt. Hood National Forest, and didn’t want to let the dismal forecast change his plans. “There’s water coming over the trail, but I didn’t think it was a really significant storm. I’ve been training all summer,” he said of the first half of his hike. But as he headed back to the trail head, Mitchell made a wrong turn. With the rain–part of an atmospheric river that would lead to storms all over Oregon–bearing down on him, Mitchell hunkered down under a tree at the edge of a steep slope to wait for conditions to improve.

“It was like bark dust,” Mitchell said of the moment when a fateful slip sent him tumbling down the slope, “I crawled back up but that’s when I lost my backpack.” Night was settling in, and Mitchell was unable to see where the pack, which held his cellphone, food, and extra layers, had landed. “I started panicking, losing hope,” he said. The next morning, Mitchell continued down the trail he was on, hoping that it bring him out of the wilderness faster than backtracking. But the trail would only take him deeper into the woods.

“My kind of mantra was stay hydrated, keep warm as you can in your core,” he said of the ordeal. As Mitchell searched for a way out of the woods, friends and family were starting to piece together what had happened. Mitchell’s father located his car at the trail head, and a search was organized. Over the coming days, as Mitchell fought to find a way out of the 1-million acre national forest, hundreds of friends and family scoured nearby trails.

After five days, their efforts paid off. “[My friend] was like, ‘Oh my God, dude, I can’t believe you’re here. Do you know how many people are looking for you?’” he recalled. After five long days of not giving up on himself, Mitchell had been found by friends and family that would not give up on him either. “I don’t even know all of the people who have been there for us, who prayed for us.” said Mitchell’s mom after her son was found, “It is overwhelming.” 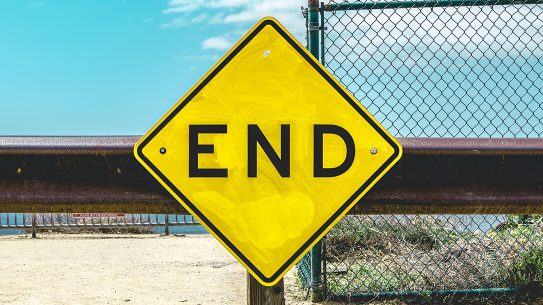 The End of the World: 9 Times the Experts Got It Wrong

Over the years, scientists and politicians have had no shortage of predictions about the...