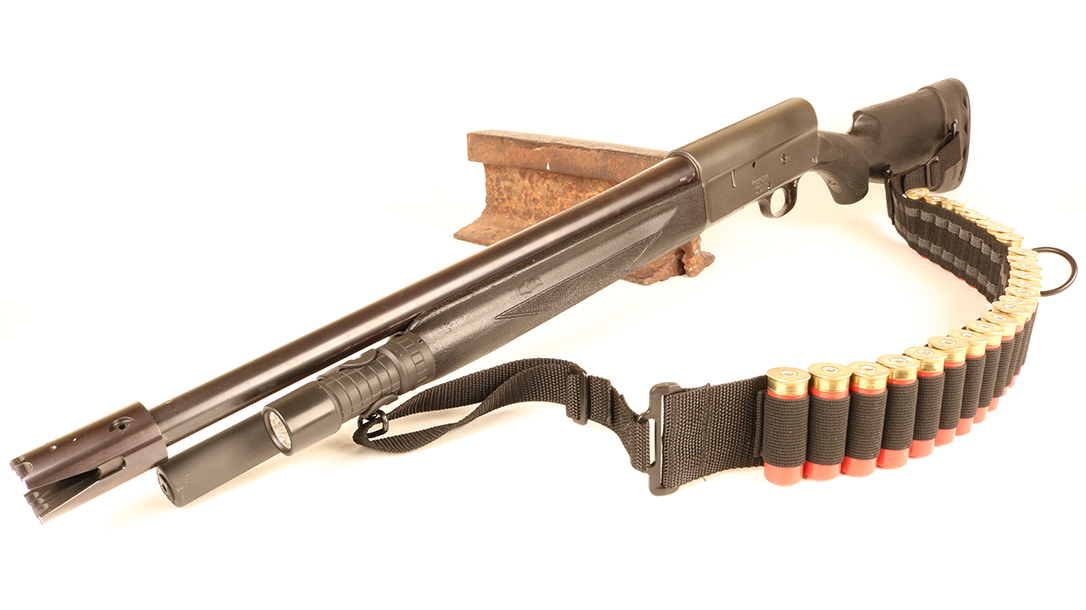 1 of 6
Photo by Will Dabbs
DIY Duckbill Doomsday Destroyer
With a little love this old Remington Model 11 becomes mean as a snake. 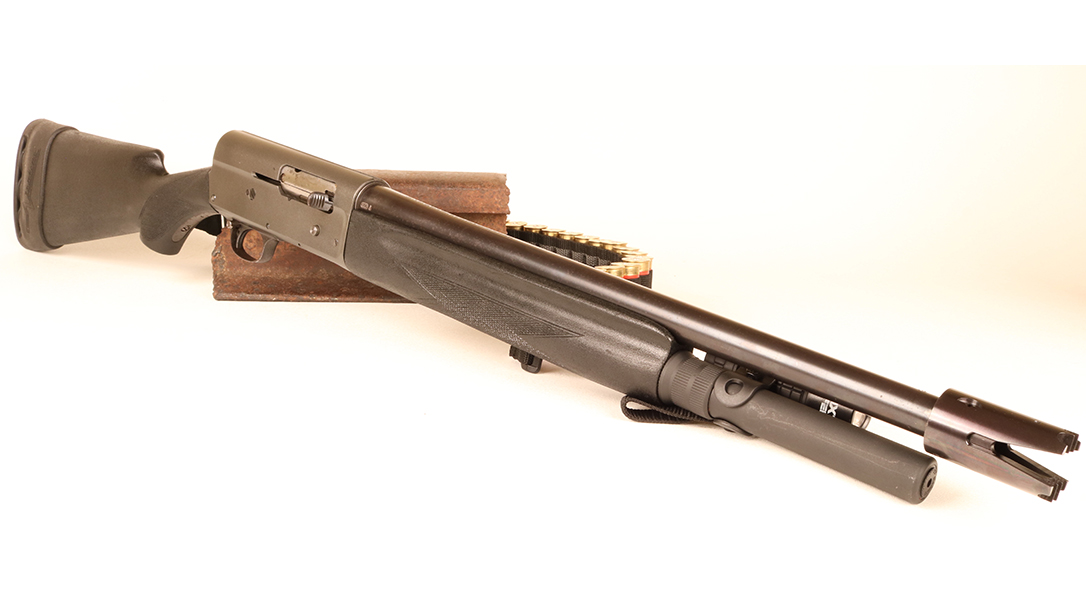 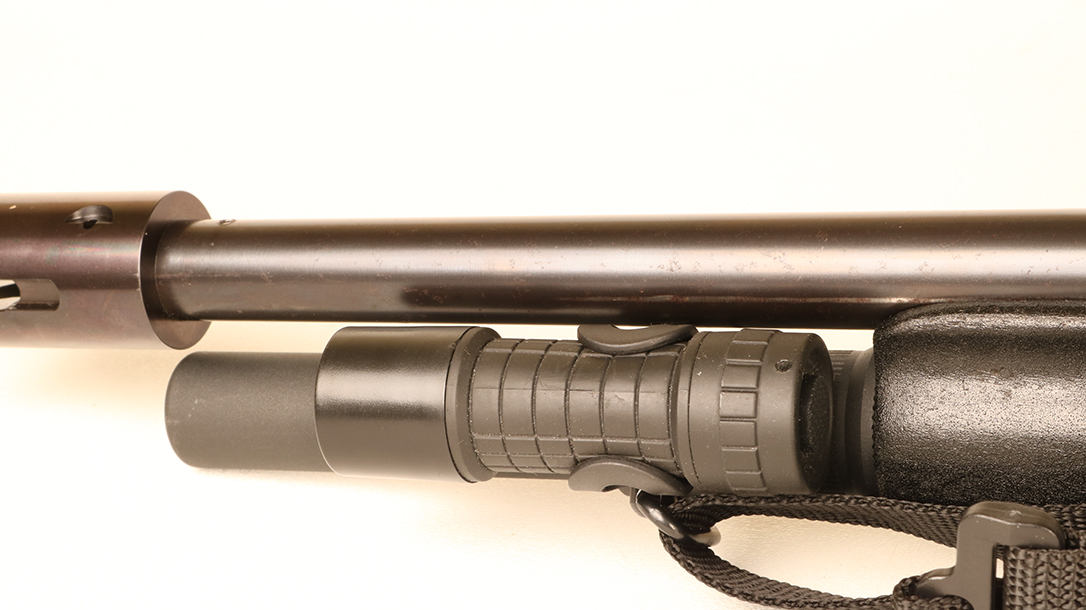 3 of 6
Photo by Will Dabbs
DIY Duckbill Doomsday Destroyer-Light
As this is a recoil-operated gun the barrel must be left free to cycle. However, the forward sling attachment point now allows us to mount a flashlight if desired. 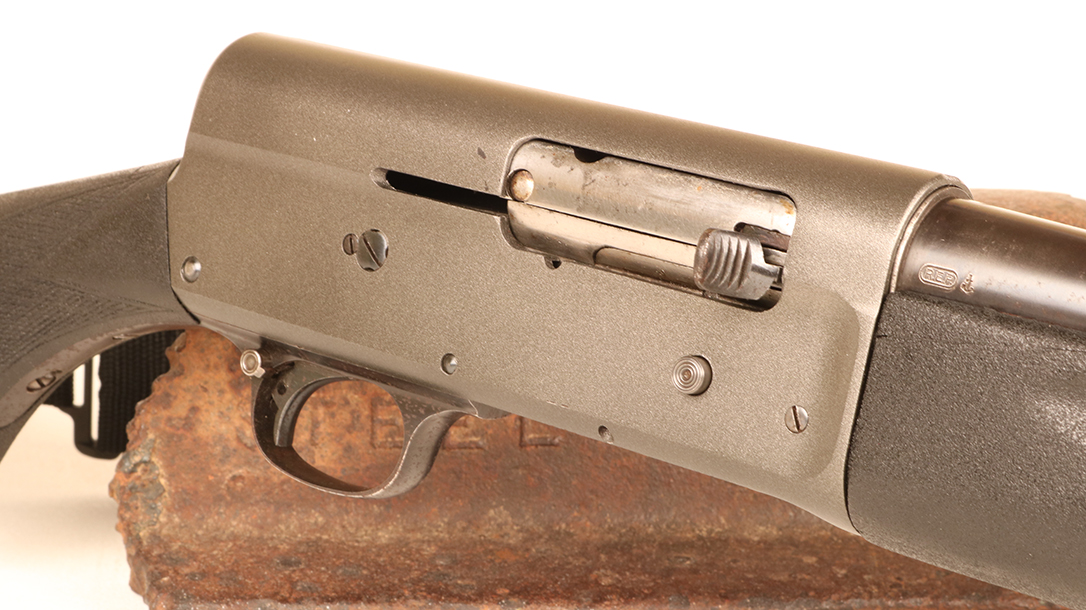 4 of 6
Photo by Will Dabbs
DIY Duckbill Doomsday Destroyer-receiver
The hump-backed appearance of the Model 11 receiver is its trademark. I chose a grey color just because it looked cool. 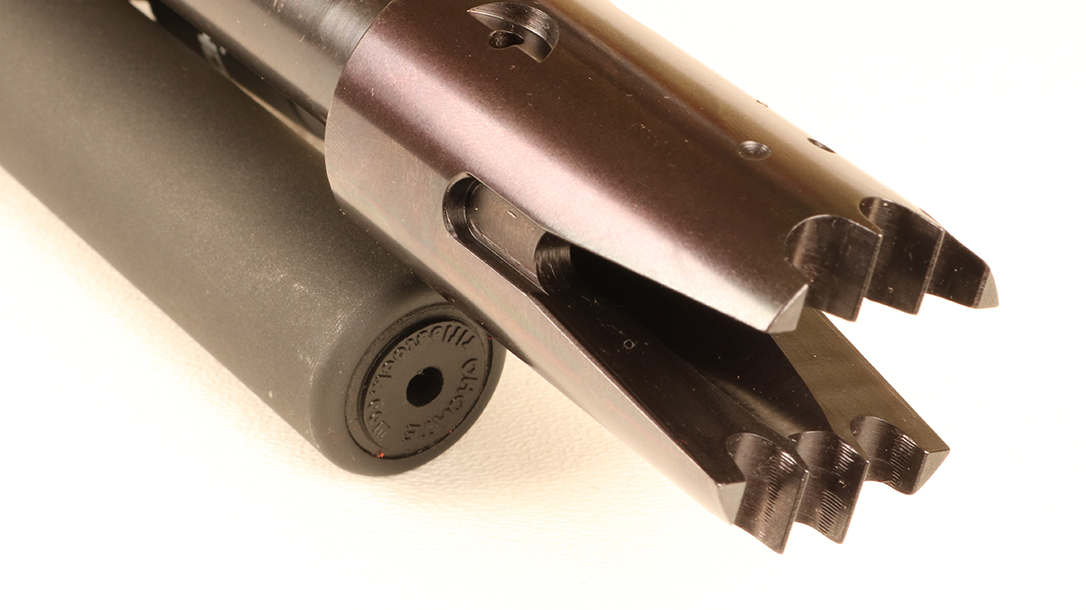 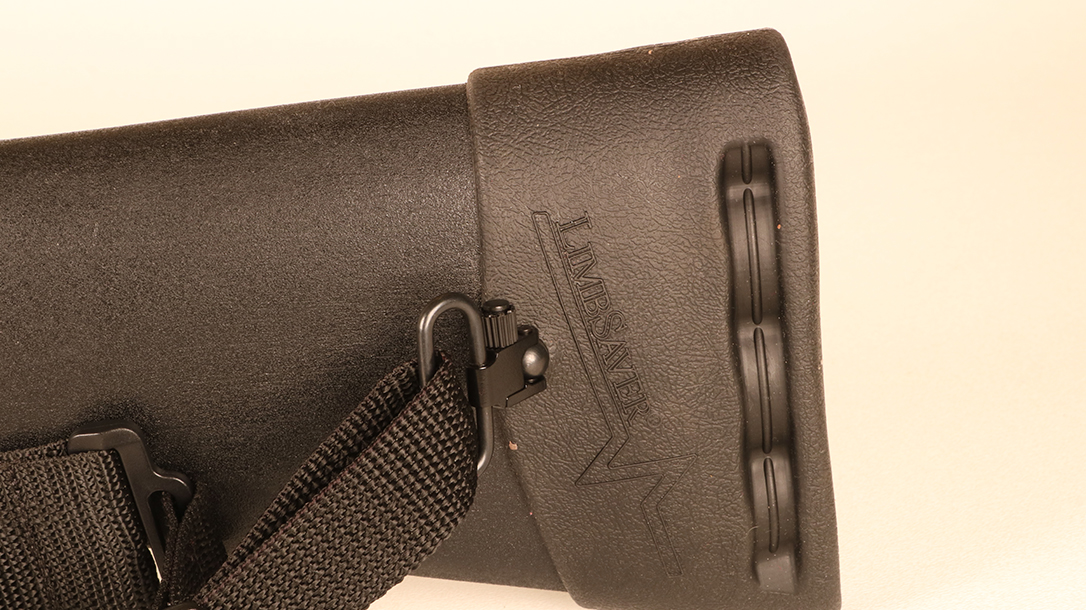 6 of 6
Photo by Will Dabbs
DIY Duckbill Doomsday Destroyer-recoil pad
A Limbsaver recoil pad from Brownells excises the nasty out of the heavy 12 bore. 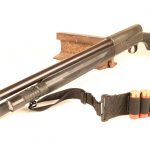 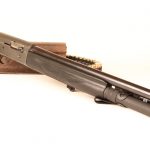 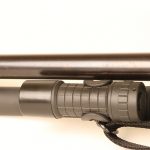 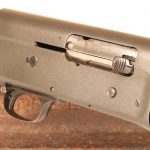 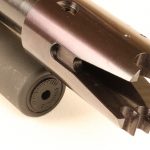 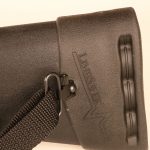 The venerable 12-gauge survival shotgun is heavy and vicious. However, there are literally millions of them in circulation. Additionally, nobody packing a 12-bore will ever be accused of bringing too little gun. The shotgun as an entity dates back to the 18th century. The British Brown Bess service musket had a bore diameter of 0.75 inches, roughly 10-gauge, and could be loaded with “buck and ball” shot loads for close range work. The first recorded use of the term shotgun was in 1776 in Kentucky. The gauge system of measurement is as antiquated as the scattergun. This number refers to the number of pure lead balls of a given diameter than make up a pound. Bigger numbers therefore equal a smaller bore diameter. 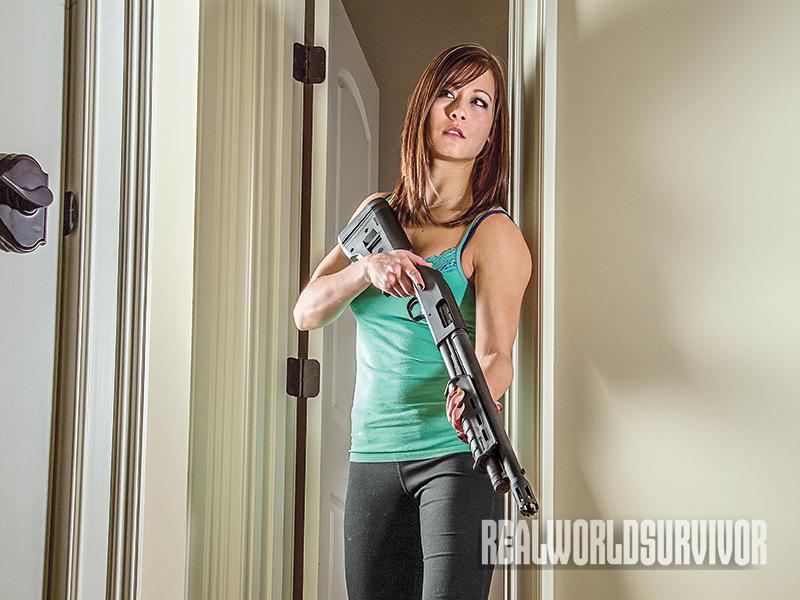 Our Remington Model 11 is a seasoned veteran of somebody’s long-standing campaign of amphibious counter-duck operations. As a result, the action is sound, but the blued finish is absolutely wretched. All of the exposed steel was at some point exposed to water and left to rust. The result is a nasty freckled appearance that just looks gross.

First strip the gun down entirely. Early Browning guns are mechanically complicated, but there is always the miracle of YouTube. Take the old finish off with a wire wheel. I have one on a bench grinder, but the same attachment on a hand drill will do. Once you have the old finish removed and the rust spots flattened out, degrease the whole thing with mineral spirits and let it dry completely.

There are lots of DIY gun finishes around, but a dirty little secret is that your local auto parts store carries bake-on ceramic engine block paint for a fraction of the cost. This stuff is available in a variety of colors and costs about ten bucks a can. Such paint must be baked for proper curing but is mightily durable. You can use your wife’s kitchen oven if you never want another homemade chocolate chip cookie. However, I found an old throwaway oven from a kitchen renovation and wired it into my workshop for just such eventualities.

Small parts also do fine in a cheap box store toaster oven. I chose to refinish the steel on my Model 11 in gray because it looked awesome. I sanded the wood down and painted it flat black using quality spray paint designed for barbecue grills. So long as you paint the bare wood the pigment sinks in such that it will outlast you.

The Auto-5 design sports a series of bushings that need to be configured in different combinations to balance out the recoil of disparate loads. When properly tuned the gun is a thing of elegance and grace. Running the gun without regard to the bushings can place undue stress on the mechanism. As a result, most all high-mileage shotguns of this sort sport cracked forearms.

The wood is indeed 75 years old, but that doesn’t mean it isn’t serviceable. This is good old-fashioned American walnut, and it ages splendidly. Drill a small hole carefully across any cracks and then seat a toothpick covered in wood glue into the hole. Glue the crack and clamp it while it dries. Carefully sand the end flat with a Dremel tool and a sanding drum when everything has set. This puts the plane of failure in shear across the toothpick and results in a finished product stronger than the unbroken original. A little touchup with some matching wood stain does wonders if you are concerned about the finish. So long as care is exercised the repair is invisible.

Some names are just foundational for modern American gun geeks. While Colt, Browning, and Maxim earned their spurs a century or more ago, Brownells feeds our Internet-fueled addictions today. Accessories, tools, widgets, and swag—if it has some nexus to shooting Brownells has it for sale.

The Auto-5 and Model 11 shotguns accept extended magazine tubes designed for the Remington 870 slide action shotgun. Brownells offers several sorts. These kits come with barrel clamps that double as sling attachment points. As the Model 11 is a recoil-operated design, however, you cannot clamp the barrel in place without deadlining the gun. I just turned the attachment sideways so it would remain clear of the barrel, mounted a flashlight in the now-empty slot, and affixed it to the near end of the magazine tube. You can move it farther out, but that creates a bending moment that puts stress on the tube.

All 12-gauge shotguns exhibit brutal recoil with full-power rounds no matter what sort of voodoo you design into the action. I picked up a Limbsaver recoil pad from Brownells as well. This soft rubber contrivance slips over the buttstock and ameliorates much of the unpleasant heavy stuff. This keeps a pleasant afternoon at the range pleasant.

Brownells found me sling swivels, a new front sight, and a universal choke wrench. This nifty contrivance takes all the nasty out of removing and replacing fouled choke tubes. No matter what chassis you use as a foundation for a project of this sort, Brownells will have the stuff to make it cool.

A shotgun sling ordered from Amazon carries 25 rounds. Add this to the seven plus one you get with the extended magazine tube and that gives you a total of 33 rounds onboard. If you cannot solve your problems with 33 rounds of 12-gauge you need some new problems. 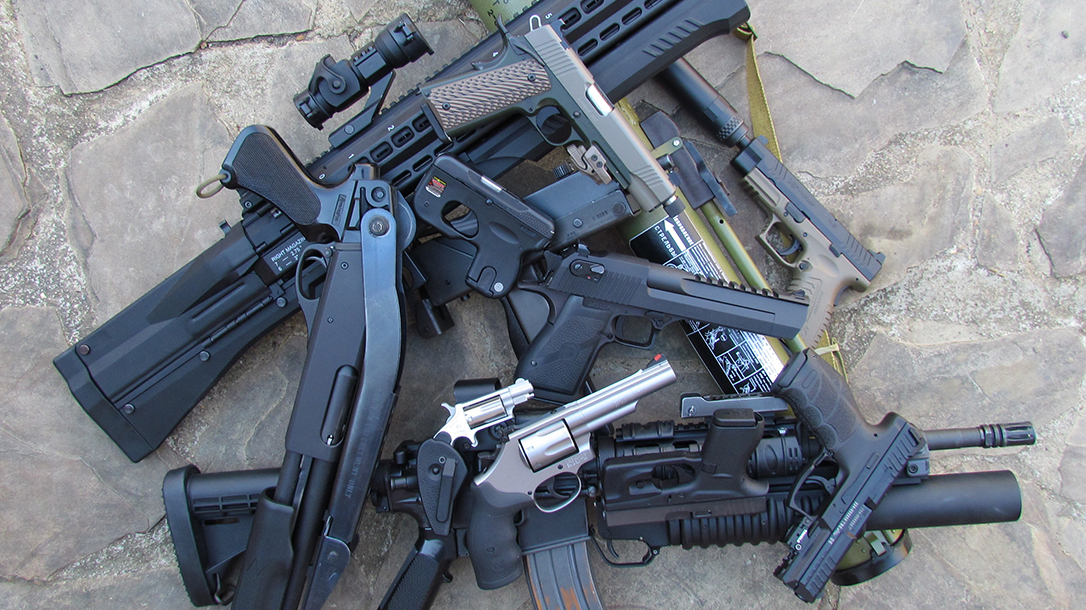 The Survival Gun: What’s Best for Your Apocalypse Arsenal?

This thing is incredible. The Paradigm SRP Gator Shot Spreader mashes your shot pattern down into a thin line rather than a wide cloud. This means a shotgun fired at chest level will literally fill a room with lead. Turn it sideways and it will shoot vertically through a cracked doorway. A single round will just about cut a paper target in half. A handful of shells will clear the brush along the edge of my farm pond. The practical applications are limited solely by your imagination. Affix this contrivance to the angry end of your scattergun and you open up an institutional-sized can of whoop-ass.

The Gator Shot Spreader threads onto your existing choke threads no matter what sort your gun sports. Just specify the details when ordering. Not only is the Gator Shot Spreader effective, look at it from the right angle and it looks like an alligator right down to the jagged teeth and eyeballs. The overall effect is just cool as a cucumber.

I cut the long fowling barrel back using a fiber cutoff wheel on my table saw. I had planned on installing a fiber optic front sight but found that the shot spreader stood up too high. It turns out that the gun runs fine just sighting over the top of the spreader.

I had a local gunsmith thread the barrel internally for a choke. You can contract the same service for a modest fee through eBay. Be forewarned that these old barrels are thin and threading them for a choke can be dicey. It is best if you use somebody who has done this before.

I mounted my near-end sling attachment point such that the recoil pad wraps over it. Punch a small hole in the skirt of the pad and it looks like it came from the factory that way. You have to wiggle the swivel a bit to get it to seat, but the bolt-in attachment is both strong and effective.

The final product is relatively heavy, particularly when topped off with 33 shotgun shells. However, all this bulk and mass keeps recoil manageable. If you are fighting indoors and there are friendlies on the other side of the sheetrock, #6 birdshot will reliably do the deed at across-the-room ranges. If you need to reach out a bit then #4 enhances your downrange thump. The horizontal shot pattern really is phenomenal to behold. However, as the device squeezes your shot bolus at the muzzle you need to avoid steel shot or slugs through the Gator Shot Spreader.

Not only is our bodged-together Frankengun wildly effective at close combat ranges, it looks freaking awesome as well. You could build your own similar doomsday scattergun out of a surplus 870 pump or an 1100 autoloader and keep the source material much younger should you find the geriatric nature of the Model 11 unsettling.

In the final analysis, a homebuilt survival shotgun will reliably keep your family secure during your trek out of the hot zone. At proper ranges the Paradigm SRP Gator Shot Spreader will quite literally cut the Bad Guys in half. The build was easy, and the final product was breathtakingly powerful. If I found myself armed with nothing more than my modernized Gator-equipped Remington Model 11 I would still be ready for anything life might choose to throw at me.

This article is from the spring 2018 issue of Survivor’s Edge Magazine. Grab your copy at OutdoorGroupStore.com. 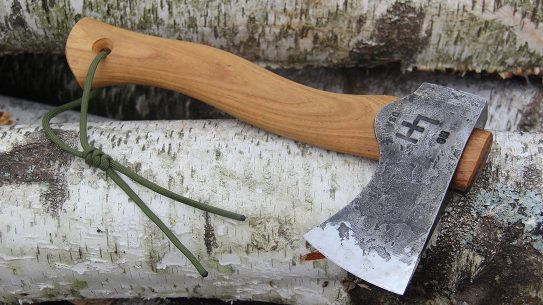 Inspired by the Gary Paulsen book Hatchet, the author revisits the skills taught in...