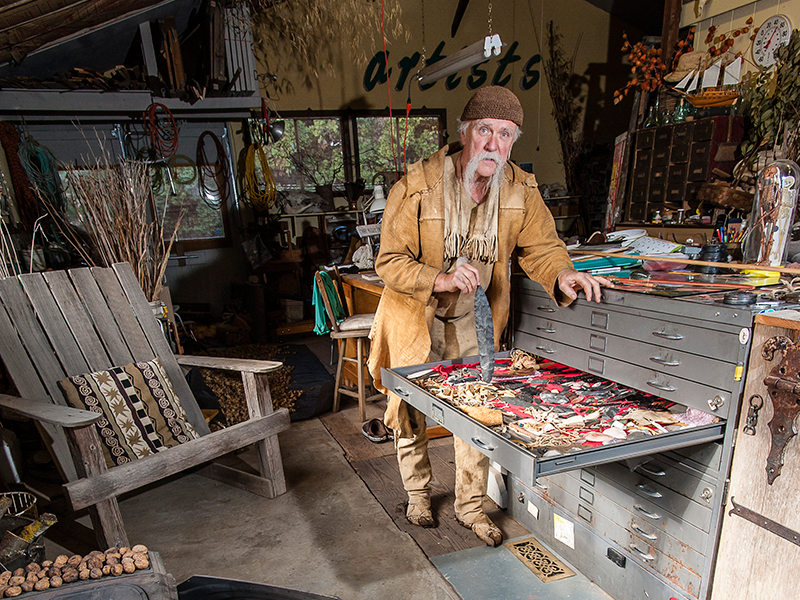 Crouched over the remains of a fire, a man searches through a deep pit of wood ash. Using a bleached white shoulder blade, he pulls a large node of local chert from the pit. The color has changed from pale yellow to a deep red-brown. Satisfied with the outcome, the stone is now ready to work. With the heat-treated stone tucked under one arm, he forces cold, stiff knees to rise with the help of a long wooden spear. Blackened calloused feet make their way over a narrow trail leading up the ridge above the small ravine.

On top of the ridge, the morning sun has warmed a rock outcropping with a commanding view of the valley to the south. He raises the stone overhead onto a natural seat in the outcropping and levers himself up behind it. From a leather bag around his neck, he produces his tool kit: A stag antler tine, leather leg pad and two hammer stones, large and small.

He turns the chert node over in his rough hands, carefully studying it. With the large hammer stone he begins his work. Supporting the stone over his leg, he skillfully drives off large sharp flakes. Some he tucks into a leather pouch. Irregular but razor sharp, they are finished tools. Still others he further customizes with the smaller hammer and antler tine.

Primitive Lifestyle: FROM CAVE TO LAB

From the brain-tanned hides he wears to the tools he is making, this is a scene from 20,000 years ago, save one detail. At the end of this two-week field trip to Roc de Marsal, a Middle Paleolithic cave in Dordogne, France our primitive lifestyle man will return to the lab to report his findings, showing archaeologists in exact detail how the tools they have found were made and used. To say Goode Jones is a primitive skills expert would be an understatement.

In an ironic twist, his lifelong study of ancient man has placed him at the cutting edge of experimental archaeology. Working with scientists, Goode uses his unique skill set to help them understand how early tools were made and used. He is a living window into our past.

Born in Mississippi, Goode grew up on his grandfather’s farm in Washington State. At the time, there was nothing primitive about tanning hides and blacksmithing. It was just part of farm life. As a boy he had a keen interest in the Native American lifestyle. Inspired by the work of Larry Dean Olson, he pressed deeper into the Washington woods and waterways. Each time taking less and less of the modern world along with him, he found the tools of survival were all around him.

After his mother remarried a man in the military he moved around with them, sometimes living near the ocean, where he developed his love of surfing, diving and kayaking. Still in high school but already a certified diver, Goode answered an ad for a summer job. With a group of paleontologists, he spent the summer camped on the beach, diving the murky cold waters of Chesapeake Bay collecting fossils. Here a wider world started coming into view. The Native Americans were just one group of primitive people around the world with lessons to teach him.

The Vietnam War may have changed some of his plans, but it could not overshadow his interest in primitive cultures. During a patrol, his 50-foot boat became grounded on a small island off the coast. Goode stayed behind while others went for help. He was fascinated and terrified when locals began to appear out of the dense jungle. He said, “They were everything you picture when you hear the word ‘bushman’: they had Afro’s, bones through their noses and carried long blowguns.” Goode’s curiosity quickly overcame the tension and he soon found himself awaiting rescue in the camp of his new friends eating monkey stew.

The Navy would introduce him to a post-military career that would set the course for much of his life. Commercial diving satisfied his love of water and wanderlust. Any spot on the globe was now in reach, the farther on the fringes, the better! Not one to drink his paycheck, Goode spent his downtime surfing and talking with the locals. At every port, he sought out people with information about the indigenous primitive culture. Goode was becoming a vessel for knowledge and the world poured him full.

When a friend invited him on a field trip working with archaeologists, he jumped at the chance. Working at a dig site, they would live as the people they studied did, making and using exact reproductions of tools and objects found at the dig. Often the only tracks left by early cultures are bones and rocks.

Goode’s expertise helped fill in the gaps time had erased. For example, he was able to show how a stone drill was hafted with sinew and used to bore a small hole in a toe bone to make a whistle. This was experimental archaeology, and he was good at it.

Today Goode lives with his wife, Carole in Oregon’s Willamette Valley. Faithful reproductions of paintings found in Lascaux adorn the ceiling of his bedroom “cave.” A path connects their house to his large studio, built almost completely from salvaged and recycled material. A feast for the eyes, a buffalo hide bullboat hangs from the rafters alongside surfboards and modern kayaks. Ceremonial masks, headdresses and deer horns line the walls. Large cabinets are full of thousands of stone tools he’s reproduced.

Each year he attends and teaches at a primitive skills gathering he co-founded: Echoes in Time (echoes-in-time.com). It’s an annual gathering just north of Salem, Oregon. Experts and novices alike from many disciplines of primitive living come together for a week of teaching, learning and good fellowship. Echoes in Time has a very laid back atmosphere. Don’t worry that your sandals or blue jeans are not primitive attire. Efforts to keep things period correct are appreciated, but don’t let that stop you from coming.

Retired from diving, Goode still enjoys traveling and surfing. His eyes spark when he talks about an upcoming trip to explore some high mountain villages in Mexico or catch some epic surf at Mavericks in California.

Wish you could battle to the death on a deserted island with 99 other...