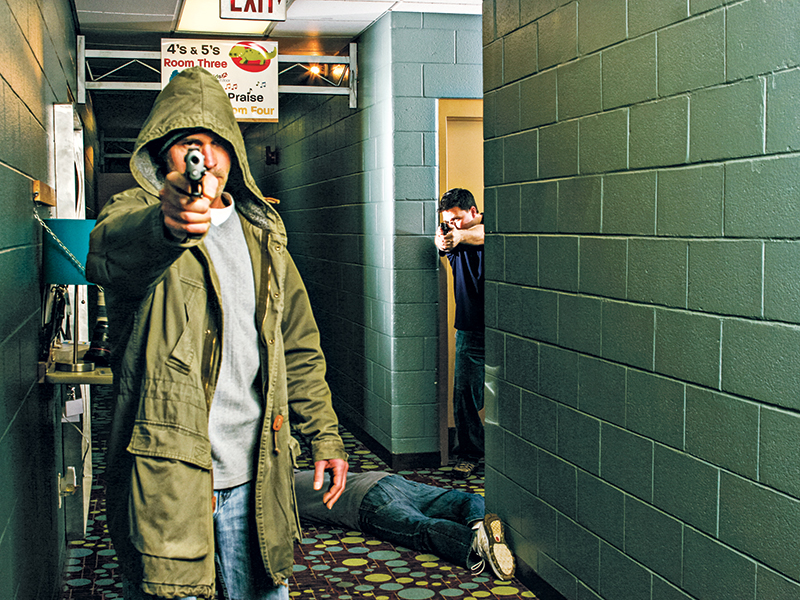 1 of 9
Photo by Ichiro Nagata
How to Strike Back and Escape an Active Shooter
If an active shooter strikes your location, will you fight back or escape? Evaluate the threat before engaging. 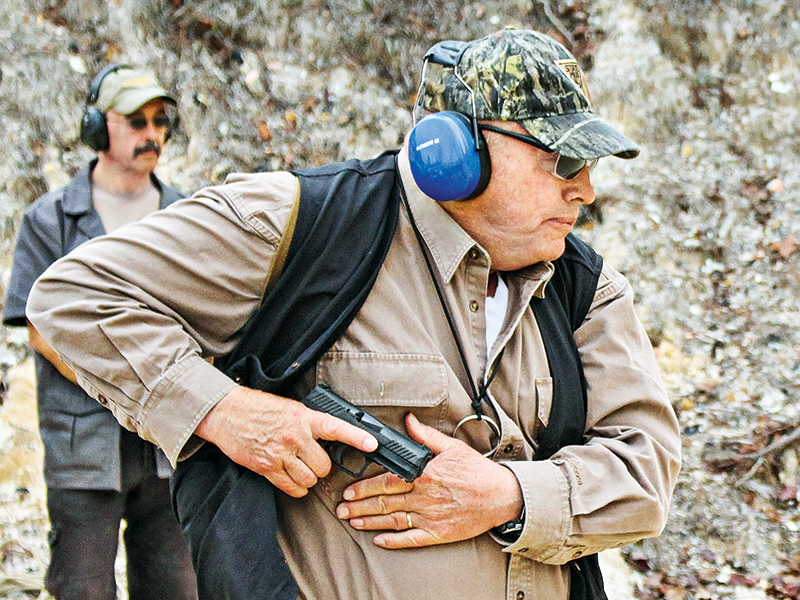 2 of 9
Photo by Ichiro Nagata
How to Strike Back and Escape an Active Shooter
John Farnam demonstrates the trigger finger “register” position during a safety briefing at the beginning of the class. 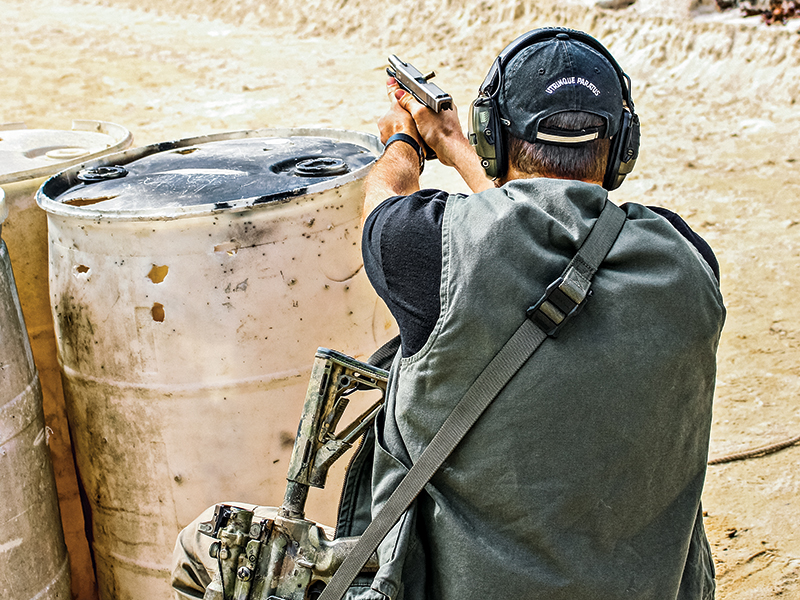 3 of 9
Photo by Ichiro Nagata
How to Strike Back and Escape an Active Shooter
This participant transitioned to his pistol behind weak-side cover to neutralize a target at close range. 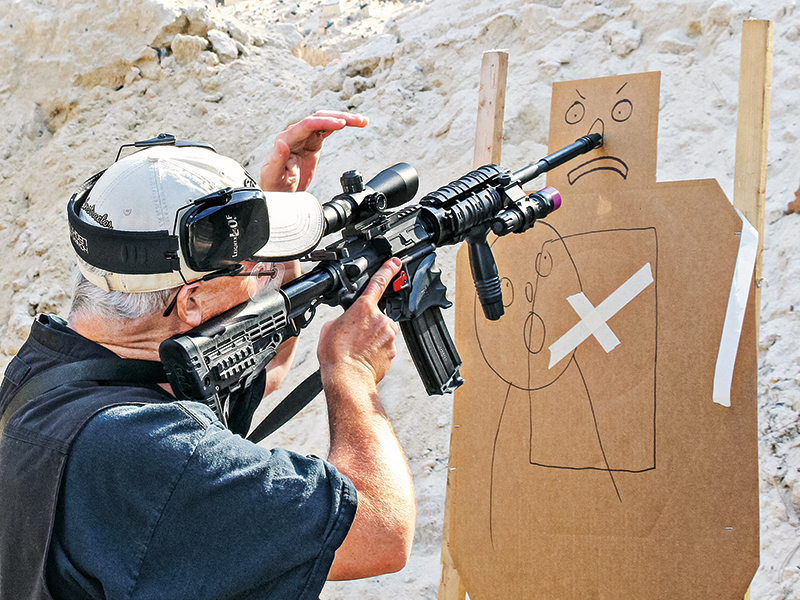 4 of 9
Photo by Ichiro Nagata
How to Strike Back and Escape an Active Shooter
Each participant checks the sight offset of their particular rifle/optic combination before live fire. 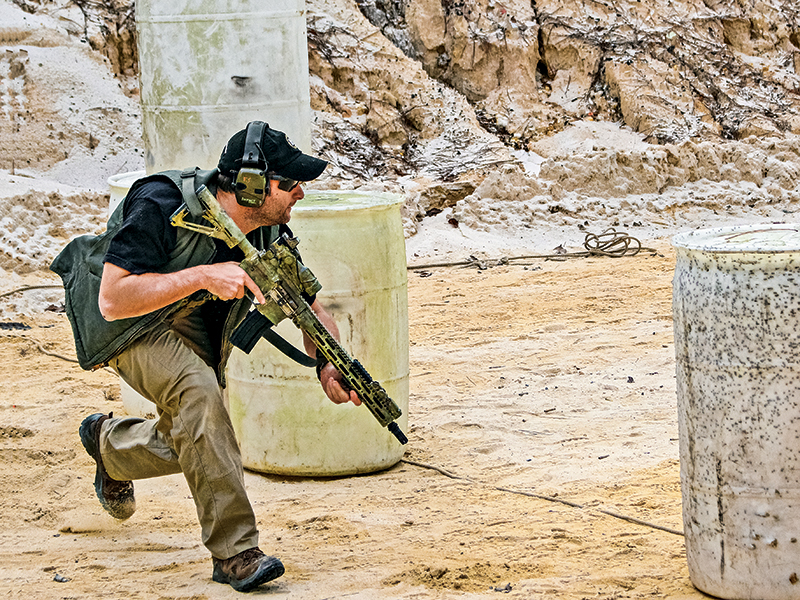 5 of 9
Photo by Ichiro Nagata
How to Strike Back and Escape an Active Shooter
When you move between cover, you should be fast and present the smallest possible target. 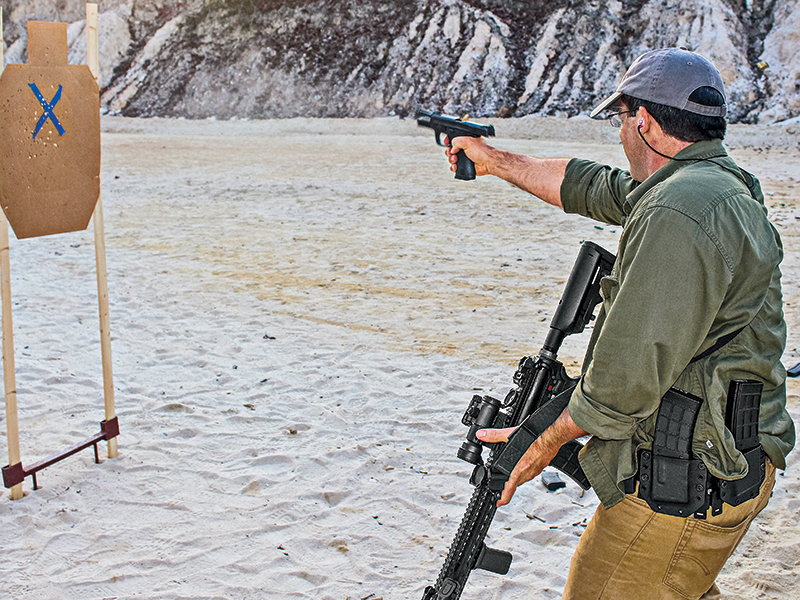 6 of 9
Photo by Ichiro Nagata
How to Strike Back and Escape an Active Shooter
Sometimes it’s faster to transition to a new gun instead of reloading. 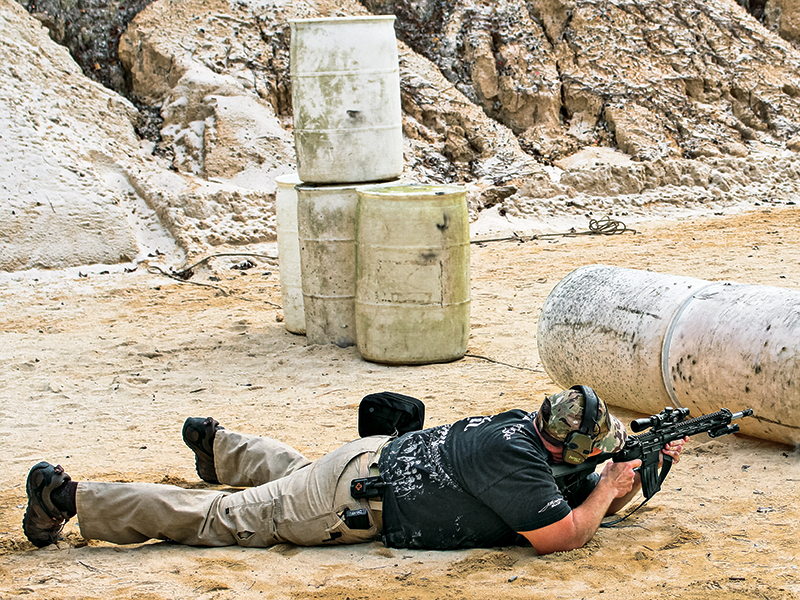 7 of 9
Photo by Ichiro Nagata
How to Strike Back and Escape an Active Shooter
Never crowd your cover, even when you’re shooting from prone. 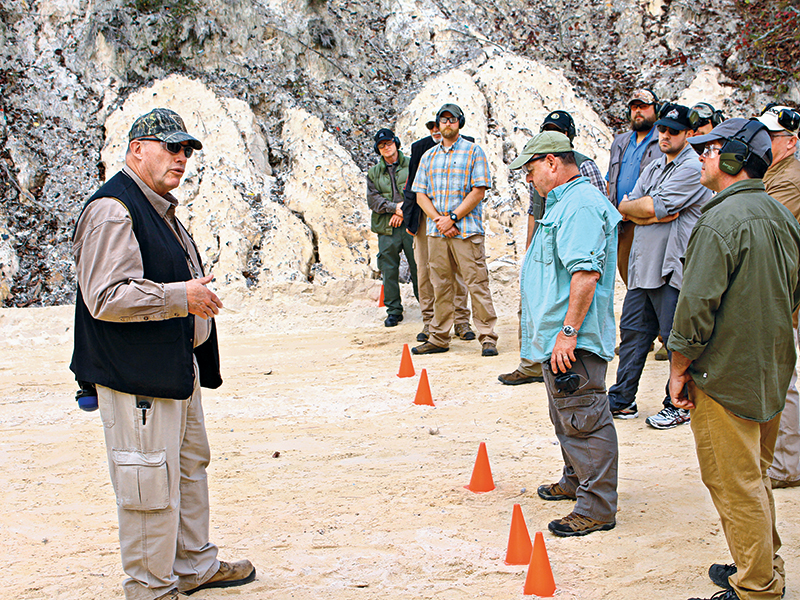 8 of 9
Photo by Ichiro Nagata
How to Strike Back and Escape an Active Shooter
John Farnam’s debriefing sessions ensure that the class learns the most from every exercise. 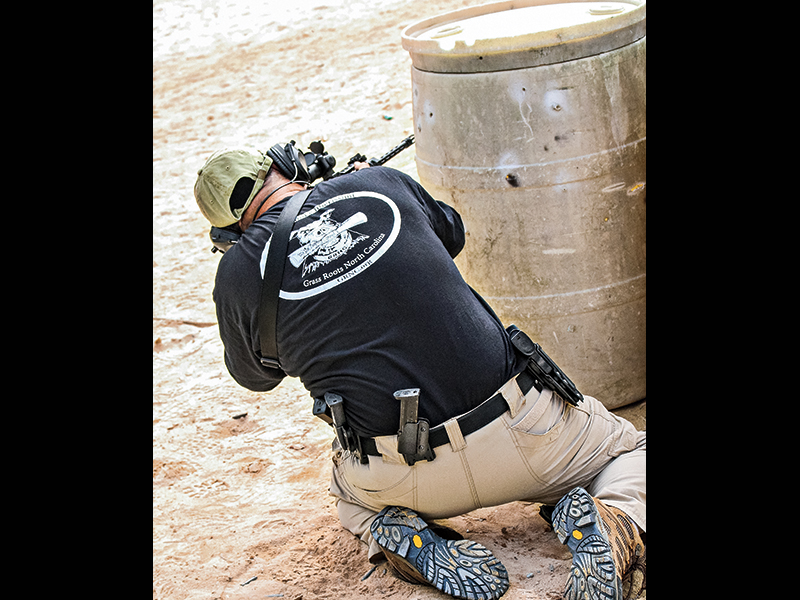 9 of 9
Photo by Ichiro Nagata
How to Strike Back and Escape an Active Shooter
Canting your rifle and exposing as little of yourself as possible provides maximum protection when firing from cover. 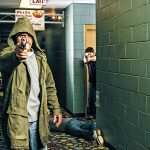 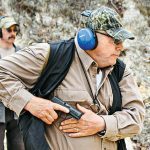 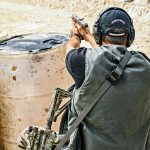 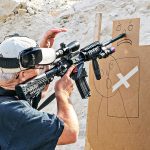 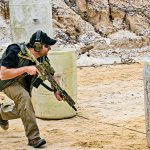 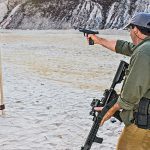 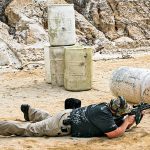 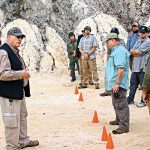 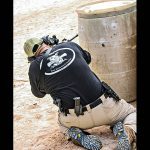 Active shooters are different from other criminals. They’re not after your money, and they don’t care about getting away. Their goal is to kill as many people as they can before they’re stopped. Dealing with active shooters requires a different mindset and a special set of skills. 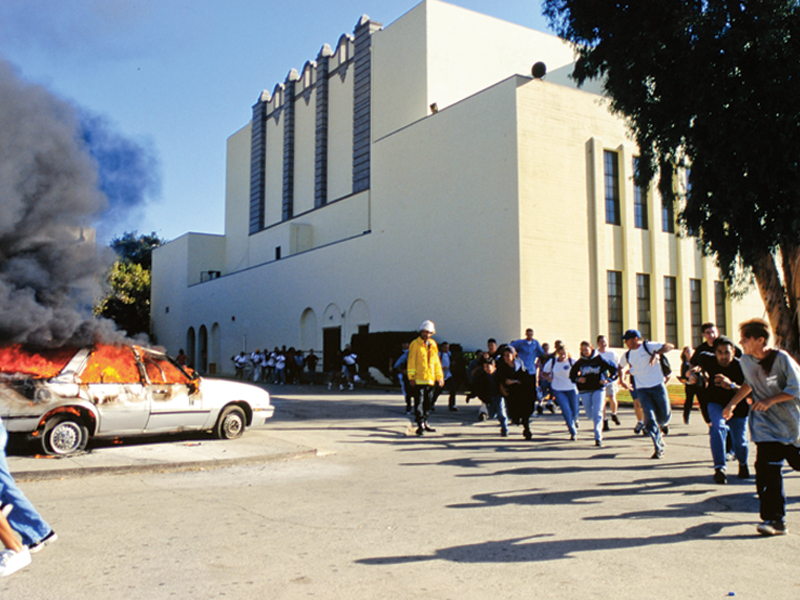 3 Tips for Surviving a School Shooting

A number of trainers teach courses in active-shooter response, and I was fortunate enough to attend John Farnam’s Armed Response to a Terrorist Attack course. John was a Marine 2nd Lieutenant in Vietnam and was wounded three times in intense combat in just 51 days. After Vietnam, John began 43 years of service as a deputy sheriff and also began privately teaching defensive tactics to police, military and civilians licensed to carry firearms. He owns Defense Training International and is the author of several books on guns and gun fighting.

Armed Response to a Terrorist Attack is a weekend course that runs from Friday evening to Sunday afternoon. It begins with a classroom presentation on firearms and tactics for daily living. John believes in an integrated approach that involves using both handguns and long guns. Long guns are important defensive tools because active shooters often employ tactical movement, and John believes that handguns are 20-yard weapons against mobile assailants. During the course, he stressed the importance of buying tactical rifles in 5.56mm NATO rather than .223 Rem. He also stated that the 7.62x39mm and 300 BLK cartridges were acceptable choices, as was the M1 Carbine when used with expanding ammo like CorBon’s DPX load.

As for pistols, he prefers double-stack 9mms for people large enough in stature to conceal them. Otherwise, John favors single-stack 9mms like Smith & Wesson’s Shield, the Glock 43 and similar striker-fired pistols. John also believes that rifles are preferable to shotguns because shotguns generally don’t have the range or precision of rifles.

When discussing active shooters, John emphasized the difference between civilians and law enforcement officers. Law enforcement officers have a duty to respond to active shooters. Civilians are responsible for protecting themselves and their families, and should escape whenever it is safe to do so. A CCW permit is not a license to enforce the law, and John was very clear that the person shooting in self-defense must be able to articulate a lethal threat to themselves or loved ones before using deadly force.

If the threat is focused elsewhere, running to the sound of the guns may just cause the police to mistake a well-meaning CCW holder for a terrorist. John also provided specific instructions on how to interact with police after shooting in self-defense.

The course combines tactical theory with live-fire exercises. The Saturday range session began with a safety lecture in which John described basic gun-handling techniques. John runs a hot range. Every gun that is not stored in a carrying case is loaded and must be carried in a safe manner. In addition, all guns that are carried on the range must be maintained in a fully loaded condition at all times, because that’s the way they are carried on the street.

After the briefing, John and his instructors worked with the participants to be sure that their skills would be equal to those needed for the live-fire scenarios that would be presented on Day Two. Individual attention is given to each participant. After lunch, the afternoon was occupied with a series of move-and-shoot and cover drills. Participants practiced moving, shooting and reloading while engaging hostile targets that were partially obscured by no-shoot targets. John emphasized several important defensive techniques here, including keeping your eyes on the threat and scanning for additional targets, transitioning from pistol to rifle while on the move, reloading on the move and never appearing from cover in the same location.

At dusk on Day One, we began two hours of low-light shooting. Participants turned on their tactical gun lights, employed their lasers and individually ran a set of drills that involved identifying threats and engaging multiple hostile targets while on the move in the dark. To make things more difficult, the instructors used their own tactical lights to illuminate portions of the area downrange. At times the instructors’ lights were set on strobe mode. This made it harder to tell hostiles from innocent bystanders. John’s philosophy of training is to challenge the existing skills of the participant to promote skill development, and this clearly was a challenging exercise.

Day Two was spent engaging a variety of targets in active-shooter scenarios. Targets representing different types of threats, like guns, RPGs and explosives, were set up downrange along with no-shoot targets representing innocent bystanders. The participants had to determine which threats must immediately be neutralized, which ones did not need immediate action and shoot the immediate threats without jeopardizing bystanders. Periodically, the targets and the large drums used to represent cover were moved to different locations. In addition, John randomly selected starting points at various places on the firing line for each run of the various drills.

These changes were done in order to teach the participants to conduct a fresh evaluation of the whole problem each and every time they ran a drill. Drills were run individually and were also conducted with several participants moving on the line. John and the instructors debriefed participants at the end of each run, asking why they made certain decisions and providing feedback on their target selection, gun handling, use of movement, use of cover and situational awareness. In addition, John and the instructors coached the participants as they conducted the drill and constantly monitored them for safety. A variety of drills were run throughout the course, including pistol/rifle transition drills, reloading drills, rifle retrieval drills, weak-hand drills and one-handed rifle drills.

The threats presented by active shooters can come at any time in any place and they can involve one or several shooters. This variability requires the armed civilian to be employ flexible tactics if he or she is to survive and protect loved-ones. John Farnam’s Armed Response to a Terrorist Attack course is designed to help attendees develop that flexible mindset and be able to choose from a range of options if they have no choice but to fight back. 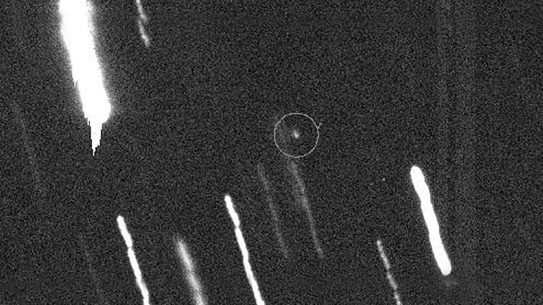 God of Chaos Asteroid Careens Toward Earth in 2029

Every now and again, a very large asteroid is discovered and its path is...