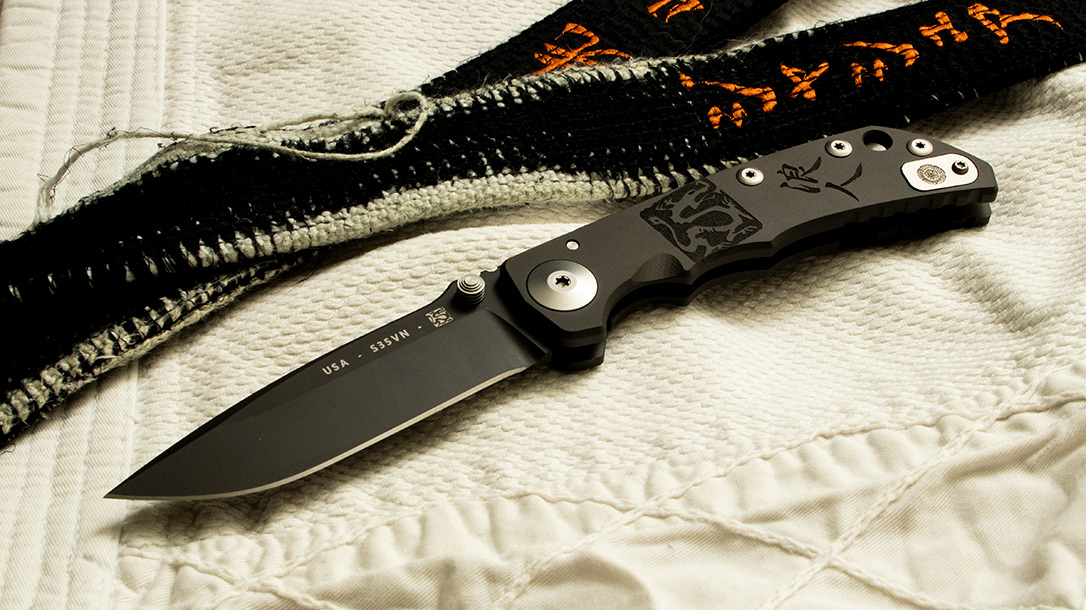 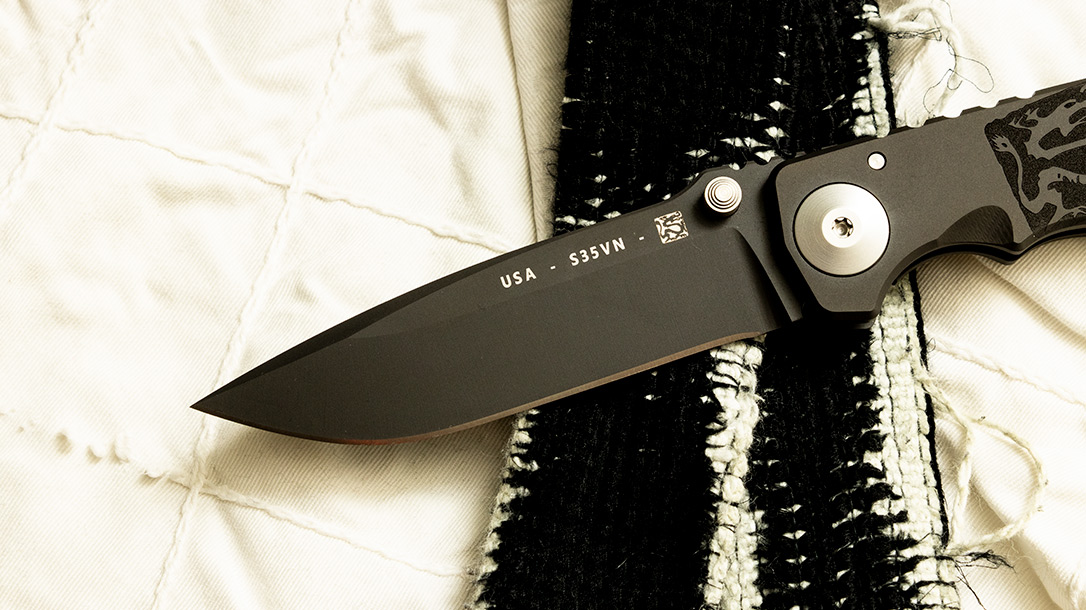 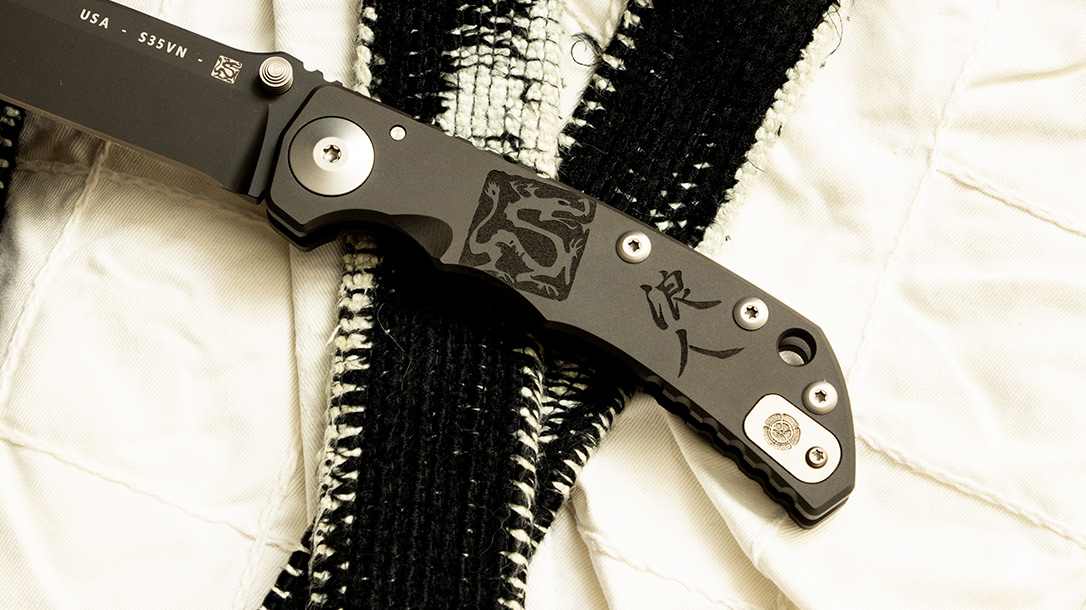 3 of 6
Photo by Joshua Swanagon
Spartan Harsey Rōnin -03
The Rōnin Dragon and text are deeply engraved into the frame, harkening to a lineage of master warriors. The clip well filler tab also includes an engraved Sakura. 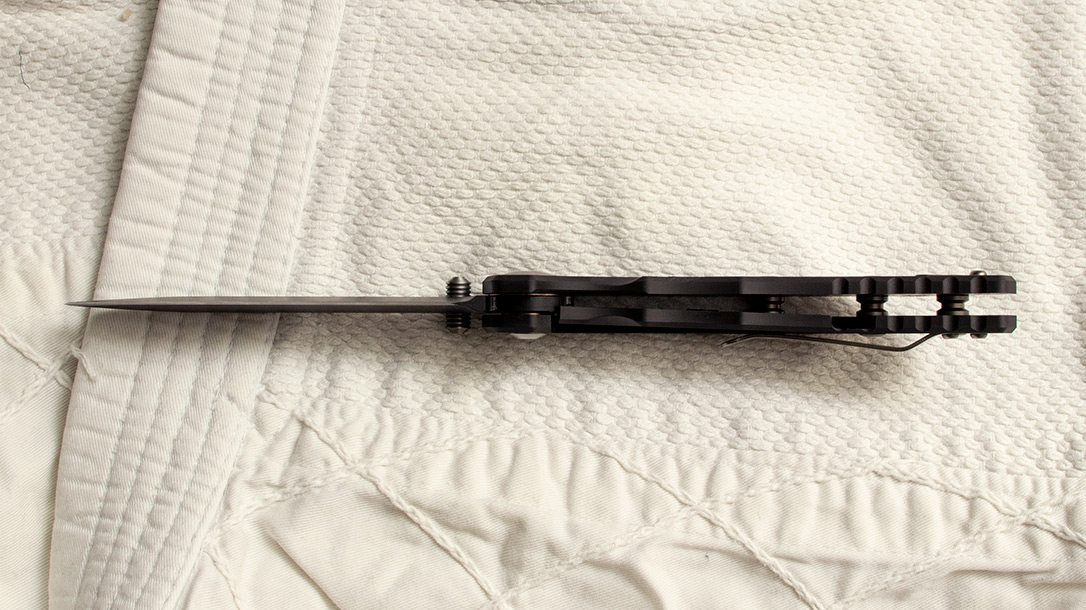 4 of 6
Photo by Joshua Swanagon
Spartan Harsey Rōnin -05
The frame lock is sturdy and holds the blade solidly in place. Some light jimping is located near the butt, for enhanced grip at the pinky. 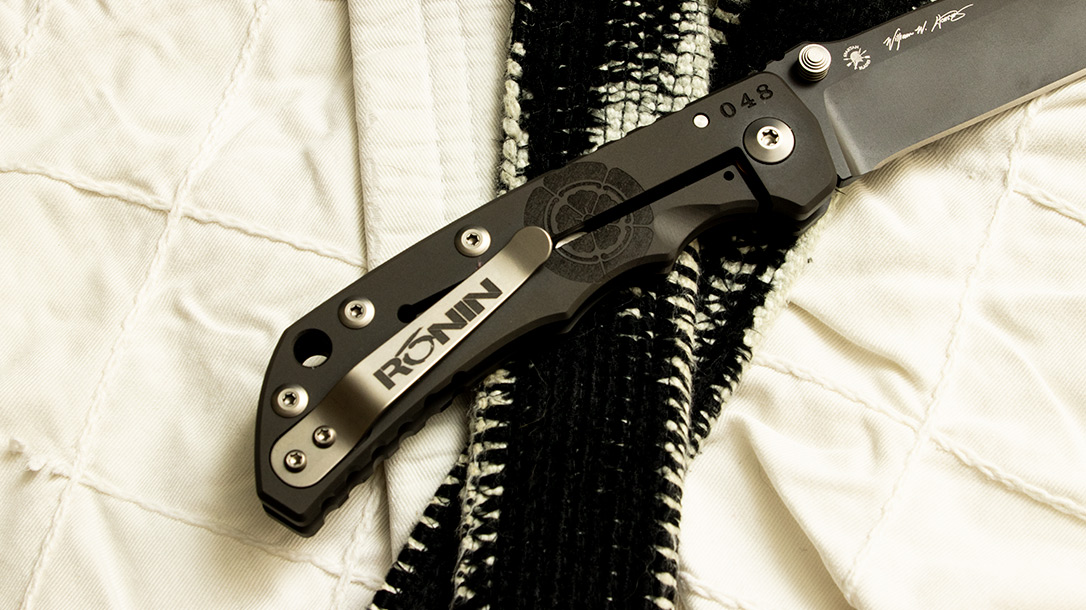 5 of 6
Photo by Joshua Swanagon
Spartan Harsey Rōnin -02
The clip is reversable for right- or left-hand carry and features the Rōnin Tactics logo. This reverse-side of the frame also includes the Sakura (Cherry Blossom) deeply engraved, paying homage to the national flower of Japan. 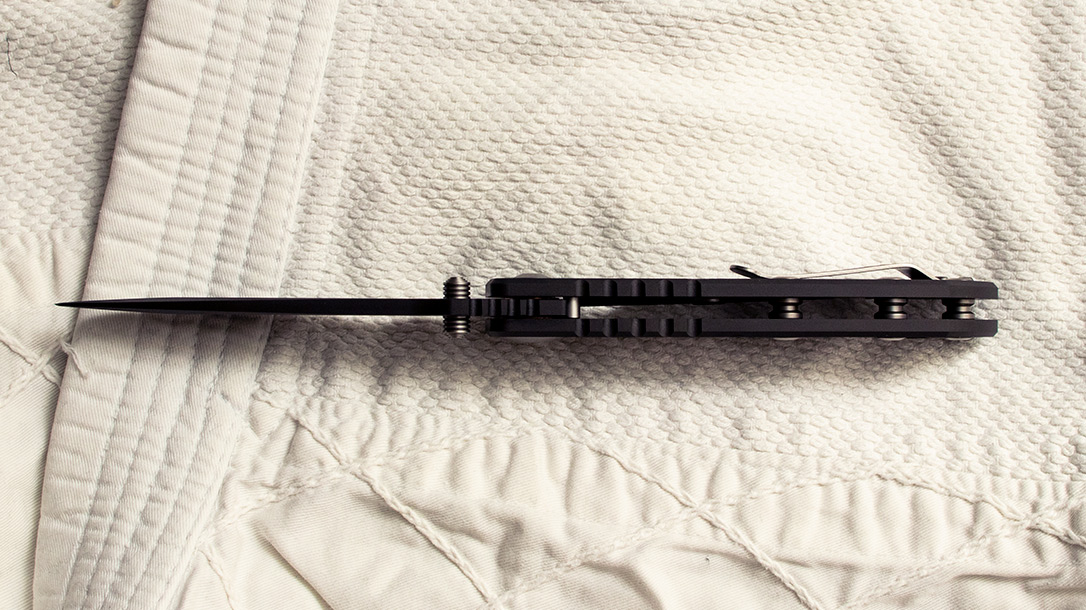 6 of 6
Photo by Joshua Swanagon
Spartan Harsey Rōnin -06
The thumb stud is available on both sides of the blade for ambidextrous access and there is thumb jimping on the spine of the blade and frame for a secure purchase of the knife. 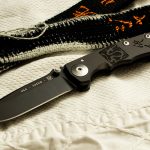 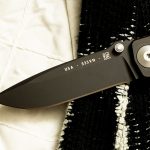 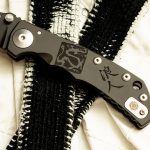 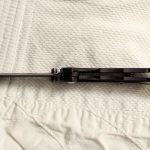 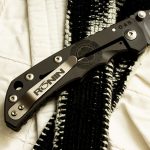 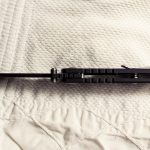 In feudal Japan the Rōnin stood alone. Today, retired Green Beret Tu Lam, exemplifies the spirit of the Rōnin. So, it would make sense that the special edition version of the Spartan Harsey Folder (SHF) – created specifically for his company Rōnin Tactics – would also stand alone in any collection it finds itself a part of. Granted, the SHF – by Spartan Blades and Bill Harsey – is not a new knife, but what they have done with the Special Edition is especially noteworthy. 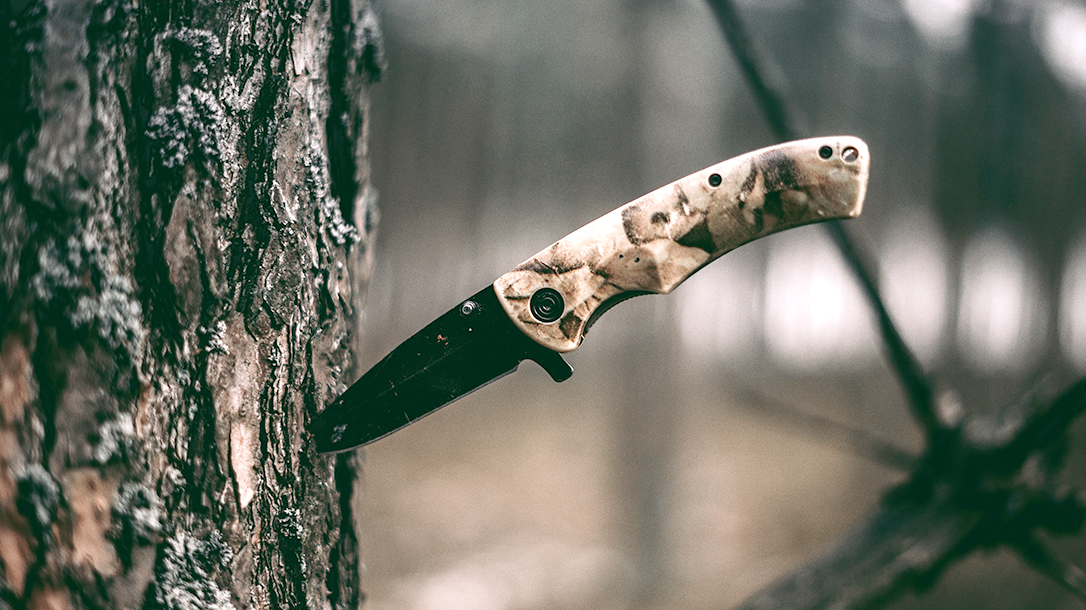 At an overall weight of 5.888 ounces, the SHF Rōnin feels solid in the hand. It balances beautifully at the index finger. With the heavier build it does weigh a bit on the pocket and would not be well suited for dress slacks. It makes up for it by being an EDC blade designed for heavy duty use, while maintaining incredible aesthetics.

The 4-inch drop point blade utilizes premium CPM S35VN stainless steel. This boasts excellent edge retention and corrosion resistance. Considered a premium steel, CPM S35VN moves any knife into the higher-end category. This has been hailed by some of the best knife makers in the industry as one of the best, if not the best, all-around stainless steels.

The Rōnin SHF has a 6AL-4V Titanium frame, with a closed length of 5 inches. Adorning the frame are engraved hallmarks of feudal Japan and the soul of the samurai spirit for whom it pays homage.

When brought to bear, the blade is held tightly in place by the solid frame lock. Once in lock up it can tend to stick a bit while trying to close it. This makes it a little harder to operate one handed. However, experience tells me that this will loosen over time. Since it utilizes the frame lock, the Rōnin SHF can be a bit hard to open with the thumb stud. This is because the lock presses in on the blade. However, with practice you will find a grip during opening that allows you to actuate the blade without pressing on the frame lock and impeding the blades movement.

The Rōnin SHF features a sturdy pocket clip. It is adorned with the Rōnin Tactics logo, which comes configured for right-hand, tip up carry. The obverse side also includes a clip well, with engraved filler tab. This allows for a left-hand, tip up carry option as well.

As any of you who have read my articles in the past know, I like to test knives hard when reviewing them. However, in this case, the Rōnin SHF is a limited-edition knife and I have to return this to Rōnin Tactics. So I am unable to put it through its true paces. With that said, I have been using and testing Spartan Blades for many years and can attest to their extremely high quality and ability to hold up to seriously hard use.

So, instead, I will go through some of the finer details about the Rōnin SHF that make it special and unique.

The Rōnin SHF is limited to 100 pieces. It includes a serial number etched into the reverse side of the handle. Also, under each clip well filler tab is the creation (birth) date etched into the well for authenticity.

Retired Green Beret Tu Lam is no stranger to the A Teams. He has dedicated his life to serving our country in some of the most inhospitable environments our world has to offer. After retiring Tu created Rōnin Tactics as a means of providing quality gear and training to military, law enforcement and civilians throughout the country.

Over the past two seasons, Tu has served as host, alongside Bill Goldberg, of History Channels’ new knife show Forged in Fire: Knife or Death, where he uses his experience as a weapons specialist and commentator.

I have been using Spartan Blades for many years now and am equally impressed with every single knife that they produce. Add to that the design genius of Bill Harsey – the creator of the Special Forces Yarborough Knife – and you have a winner that was made to endure the worst our fighting men and women face on a daily basis.

The Rōnin SHF is no exception. A beautifully constructed, purpose-built EDC knife that makes its home on the battlefield or the boardroom, the Rōnin SHF stands alone with the soul of the samurai it exemplifies. Available only at: www.RoninTactics.com. 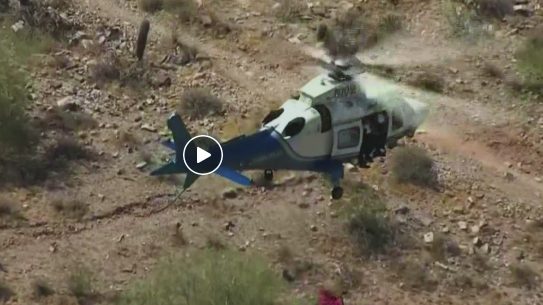 WATCH: Airlift Gone Wrong — This is NOT How to Rescue Someone!

An unfortunate situation for an elderly woman was made worse by an airlift gone...