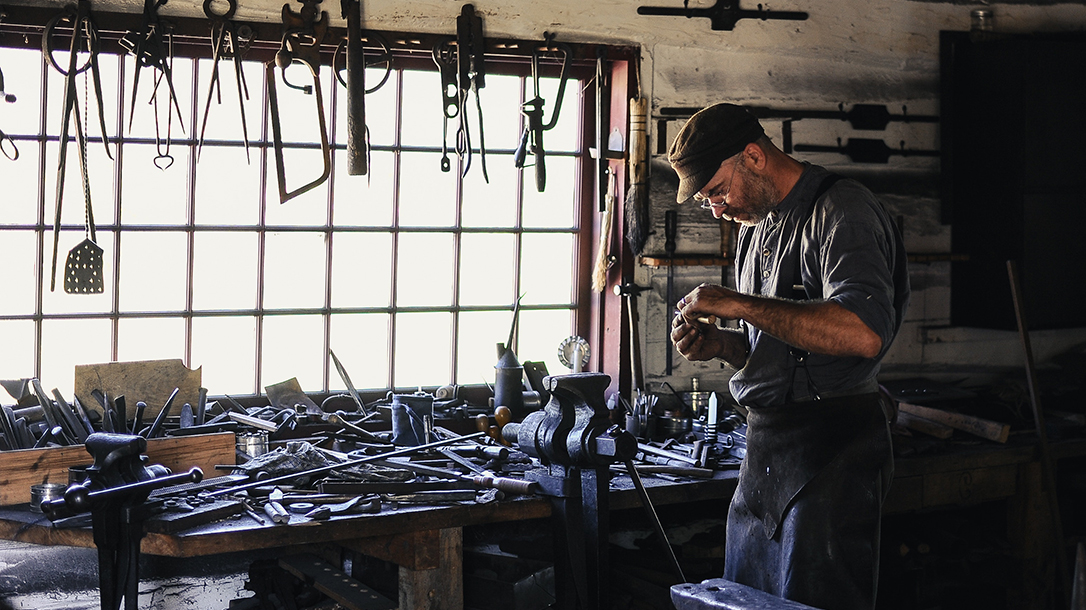 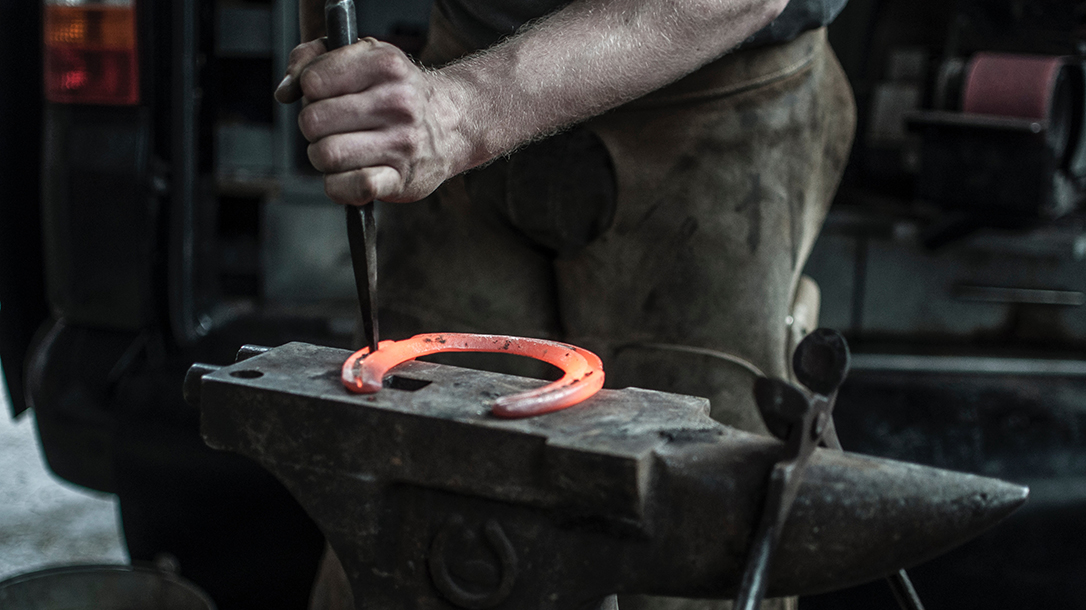 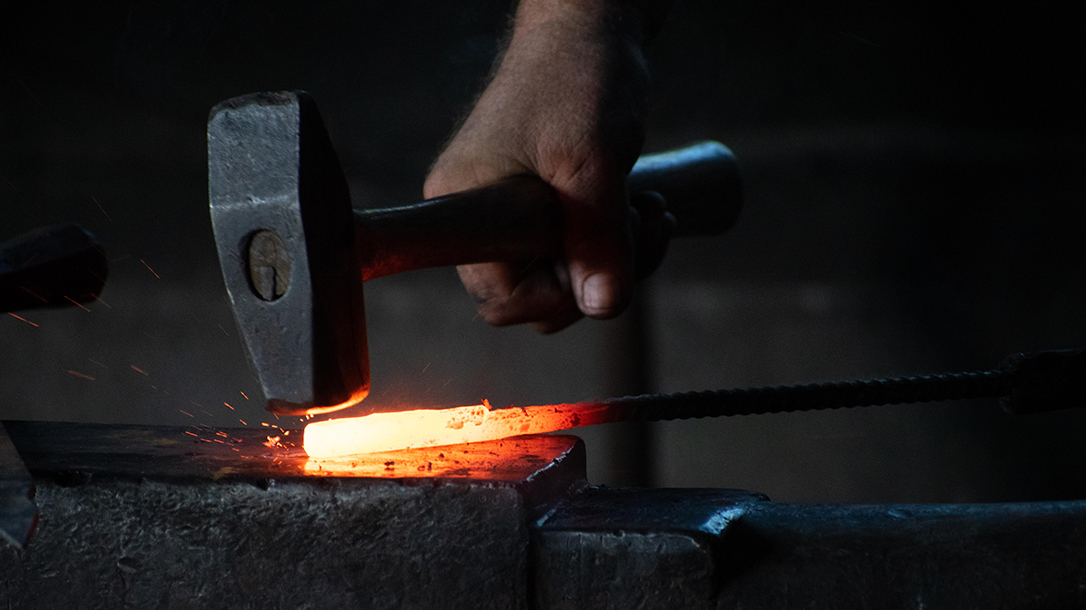 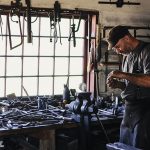 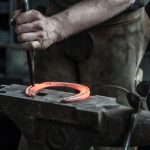 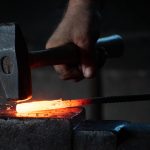 The Return of the American Blacksmith

Nestled in a small park within a suburb of Washington, D.C., this was something you’d never expect to see: a primitive-looking blacksmith shop just a few hundred yards away from a busy suburban street. This is where members of the Blacksmiths’ Guild of the Potomac (BGOP) meet twice a month to socialize, share tips and tricks, square away club business and, of course, spend time working raw materials into usable tools and products.

When I stepped into the shop, two things became clear to me: I was in awe of what I saw, and I had absolutely no clue what they were doing. The shop had multiple coal forges, a plethora of anvils and more hammers than Home Depot.

The club members were hospitable, to be sure. Everyone was polite and willing to help the guy who clearly had no idea where or how to begin. By the end of the night, I drove home with a functioning—albeit ugly—bottle opener that I had forged.

I could have made two bottle openers, but I literally melted the first one. I was chatting with Brian, who gave me the bit of instruction that I mentioned at the beginning of this piece, while I waited for my steel to heat back up for the final shaping. We were talking and I wasn’t paying attention. All of a sudden, it looked like someone had lit a sparkler in my forge. As I quickly pulled the glowing orange rod out of the fire, it continued to spark. I was left looking at the melted nub where my bottle opener had been.

Depending on the exact composition, steel melts at approximately 2,000 degrees Fahrenheit. You must keep an eye on your metal, always making sure you’re aware of its color and time in the fire. If you forget (like I did), all of your hard work will be for nothing. As I grabbed a new piece of steel, I asked, “Did you let me make that mistake on purpose, Brian?” He just smiled. Lesson learned.

My education started innocently enough. Like many people, I’ve seen far too many episodes of Forged in Fire on the History Channel. I was inspired by how many of the contestants were self-taught and did blacksmithing and knife-making on the side. The contestants make quick work of the metal with the aid of gas forges, power hammers, belt grinders—all tools I knew nothing about.

I was more intrigued, though, when the contestants heard they had no access to power tools. Hand-cranked coal forges and hand hammers would be their only way to move the metal. This was getting back to the roots of blacksmithing. The history of the craft and its primitive ways fascinated me. I had to know more.

Ah, the YouTube videos—vlogs and tutorials by the dozen. I had to start watching with my phone plugged in because I would use an entire battery life streaming different tips, tricks and projects. Finally, after thorough passive instruction, I uttered those fateful words: “Well, if they can do it, then I can do it, too.”

Google really does have all the answers. After searching topics such as “blacksmithing basic” and “blacksmithing schools near me,” I stumbled upon a website for an organization called the Artist-Blacksmith’s Association of North America, or ABANA. Born in 1973 with fewer than 30 members, ABANA has grown to 4,200 members with 90 affiliated organizations worldwide. A search on their website yielded five affiliates within a two-hour drive from my home.

After some exploration of their respective websites, I settled on the BGOP. A few emails later, I found myself following GPS directions to a blacksmith shop in the concrete jungle that is northern Virginia. That’s where I had my awakening.

After my experience making a bottle opener (and ruining another one), I was excited to learn and do more. Every available book on blacksmithing came home with me from the library. I learned that a couple BGOP members teach beginners’ classes, so I got in touch with those guys. As luck would have it, one of the members teaches classes only 20 minutes from my house, and he had availability in an upcoming beginner class.

Arriving at the teaching forge that Saturday morning, I was greeted by two classmates (both younger than me) and our instructor, Phil. Sporting a white beard and glasses, wearing a blue-and-white-striped train conductor’s hat and a pair of dirty blue jeans, Phil was exactly the instructor I pictured a blacksmith to be.

First thing’s first: “How many of you wanted to try blacksmithing because you’ve seen Forged in Fire on TV?” Phil wasn’t surprised when we said it definitely influenced our decision to take this class. “Well, there’s a lot that goes on that doesn’t make it into the show. Remember, that’s television. This is real life,” he said.

Before we lit the fires and started hammering on hot metal, we had some classroom learning to do. Phil showed us diagrams on how the forge operates, how to light it and how to keep it going. Running a coal forge is truly an art form. You’ve always got to be aware of what’s happening and asking yourself questions: Do I have enough coal? Am I getting good airflow? Is my fire burning too hot or too fast? There’s a lot more to it than turning on the gas and hitting the igniter. Lastly, Phil also showed us what the different flame colors and metal colors indicate as the forge is heating up.

With that basic knowledge nailed down, we lit some newspaper on fire, got the blowers going and piled on the coal. When the coal first started to burn, it gave off a lot of smoke. I mean, a lot—thick, pungent, greenish smoke, too. Those are the impurities burning off before you get a solid fire going. You don’t want to start heating your metal with all that smoke billowing out of the forge. Once the smoke dies down, you have the beginning of a nice coal fire in which to start heating your metal.

The two-day class I took was called “Tools & Tongs” because we made—you guessed it—tools like punches and chisels as well as tongs with which to hold the stock you’re working. To first get a feel for moving some metal, we each made small hooks. After I got mine formed and added an artistic twist to the square stock, it was time to flatten the opposite end and drift a hole for the nail to fit in to mount the hook.

This is where things started to get a bit messy. Flattening the end and making a hole in it would be easy, right? Wrong. Then I remembered the piece of advice from Brian: If things are going wrong, you hit it. I regrouped, hit the metal again and made it into a small spike. Instead of being a hook that gets nailed or screwed to the wall, it was now a hook that gets hammered into the wall. Problem solved.

Next, we crafted some chisels and punches, making sure to temper them so that they would be hard enough to use. Getting the color just right so that the metal is at the perfect temperature is not an easy task, but it is essential for proper hardening. We learned this the hard way: another student and I broke our punches when we tried to use them. Undeterred, we grabbed more stock and put it back into the fire. Our second attempt went better than the first. Finally, with those basic tools in hand, we set out to make tongs.

For such a basic-looking finished product, there sure is a whole lot of work that goes into making a pair of tongs. Over the next day and a half, I successfully completed three different designs: one pair each for flat, round and square stock. 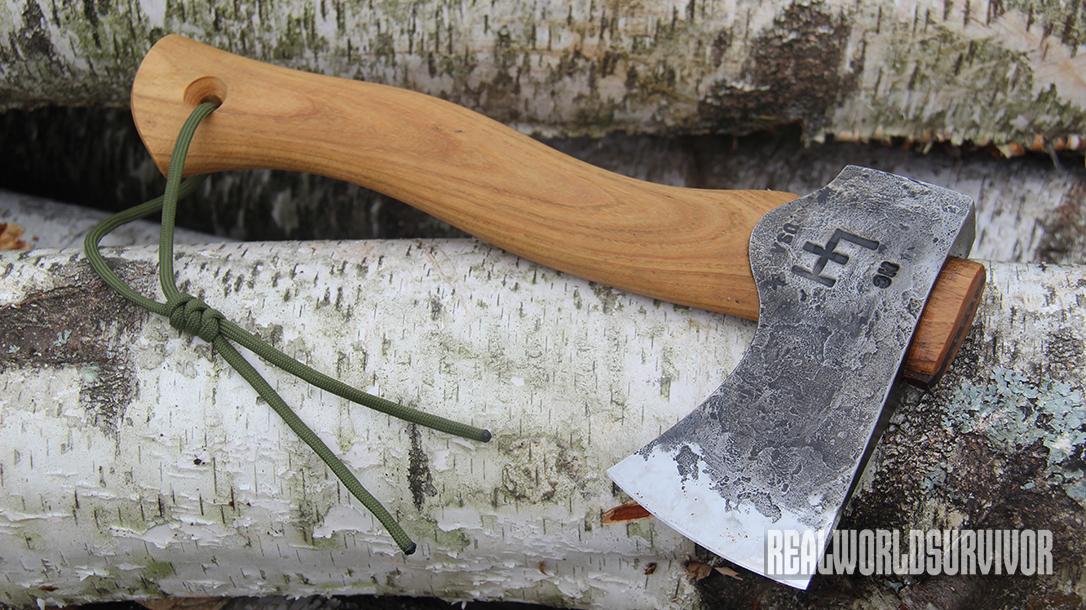 I learned a lot more in the class than just how to forge hooks and tongs. First and foremost, I learned that blacksmithing is a great workout: I used muscles I never knew I had! Beyond the physical education, I learned how to build a coal forge fire, how to manage it, how to read fire colors, how to temper, how to drift holes, how to fasten a rivet and much more.

When I got home, I scoured the internet for places from which to get raw materials, more sophisticated tools and anvils, and instructions for how to build a forge. These are all things I had done before the class, but I really didn’t know what I was reading. Now I was able to differentiate between types of steel, anvil shapes and weights and what was a good product—or not.

It wasn’t long before I had tracked down a used forge from a former amateur blacksmith, bought an anvil and even acquired an antique hand blower from a local farm auction. With my basic forge complete, I began channeling my inner frontier blacksmith. It’s easy to get lost in the flames, thinking about the blacksmiths from centuries before. Now I understood why the town blacksmith was one of the most respected and valued men in town, even if his job was the furthest thing from glamorous. I also realized that there was some truth to my earlier statement that launched this whole endeavor. I had proven that if they could do it, then I could do it, too. And so can you. 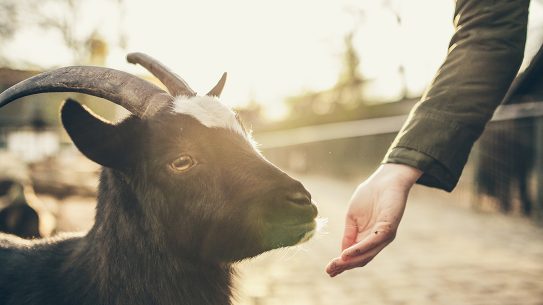 Normally, we associate petting zoos with fun and children experiencing farm animals in an...