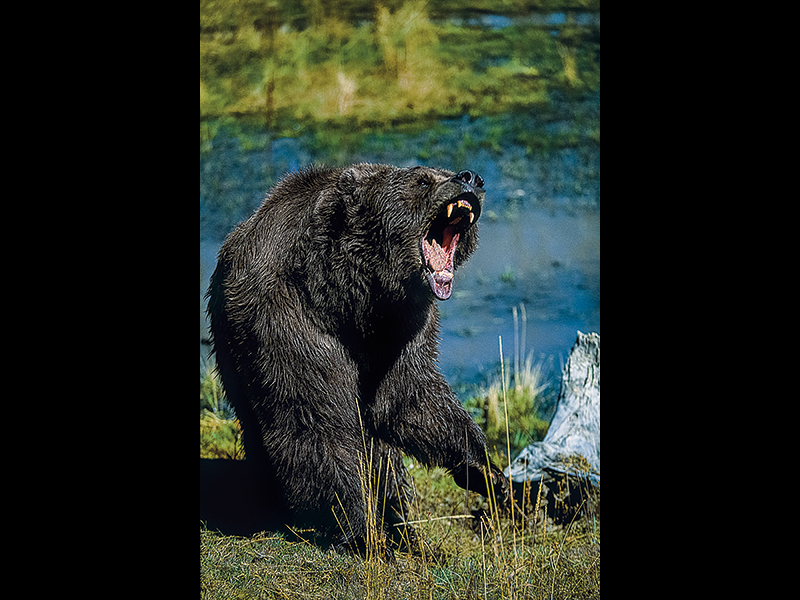 1 of 6
Photo by Thinkstock
Bear Defense: Identifying Predator Territory
Follow this advice to stay safe from bear attack when on bear territory. 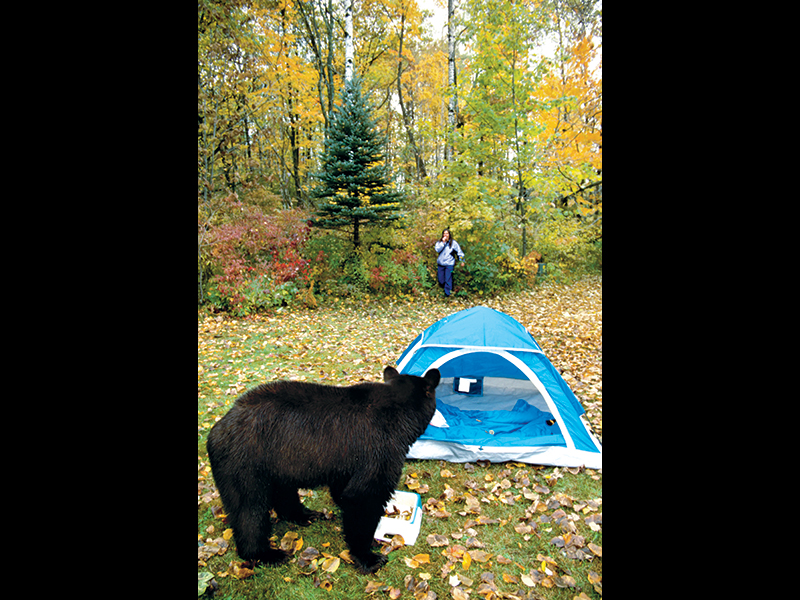 2 of 6
Bear Defense: Identifying Predator Territory
When traveling through bear country, never leave food in your tent or sleeping bag. You are just looking for trouble, and in some areas it is actually against the law. 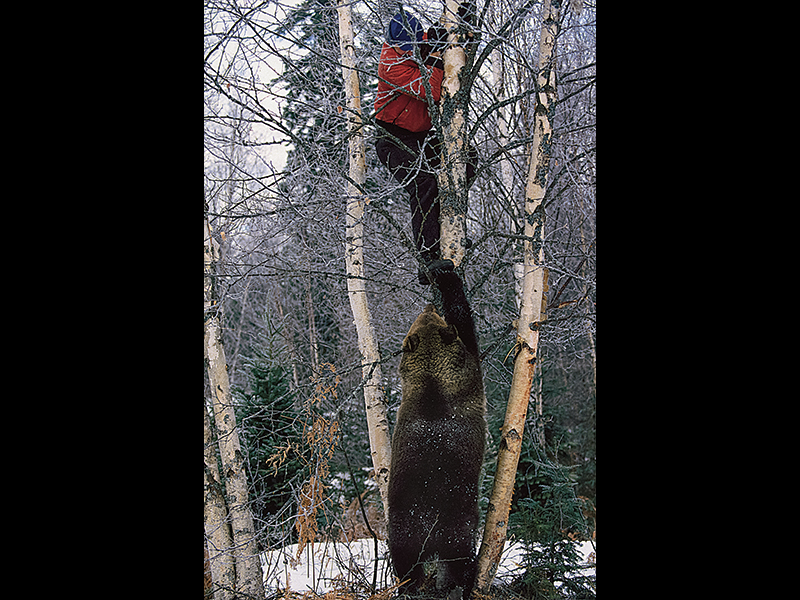 3 of 6
Photo by Thinkstock
Bear Defense: Identifying Predator Territory
If you stumble upon a grizzly, do not take off running in fear. It could easily trigger the animal’s predator-prey response. 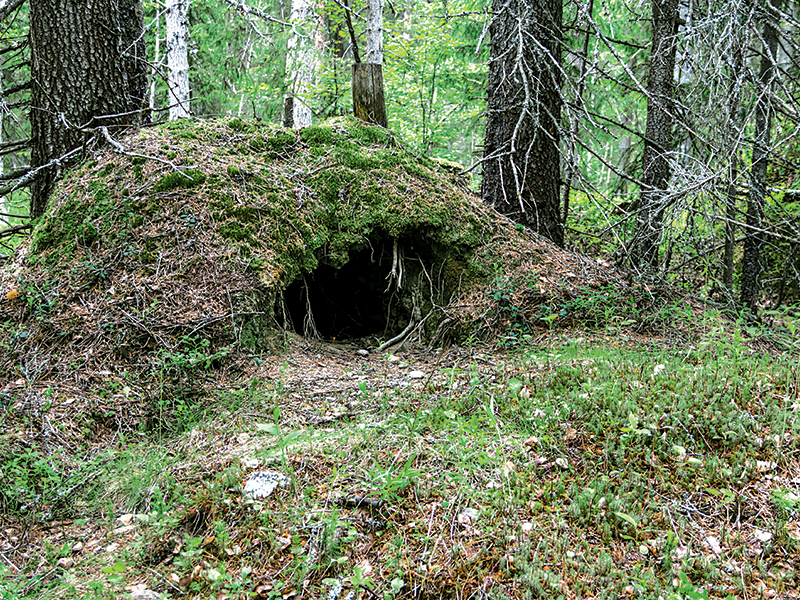 4 of 6
Photo by Thinkstock
Bear Defense: Identifying Predator Territory
Bears have been known to den under cabins, inside fallen logs or inside old stumps. They rarely den in the same area one year to the next, and sows with cubs tend to den up first. 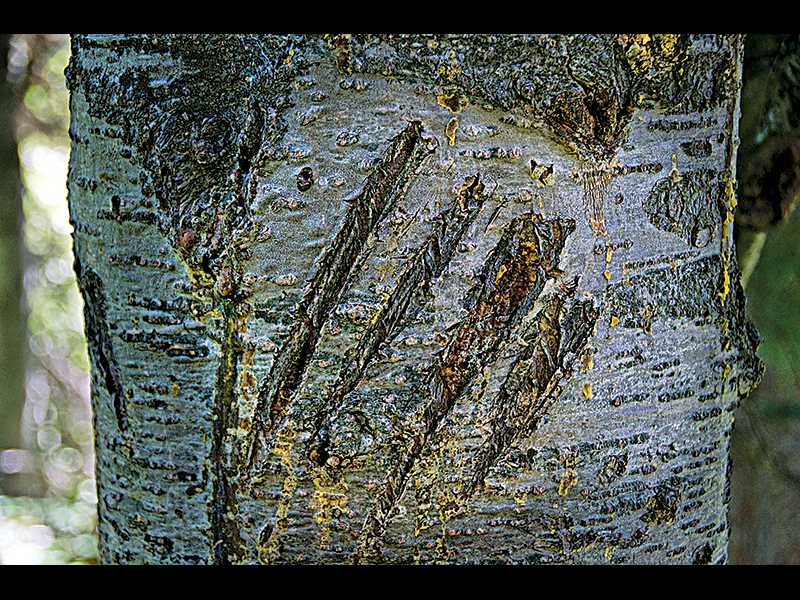 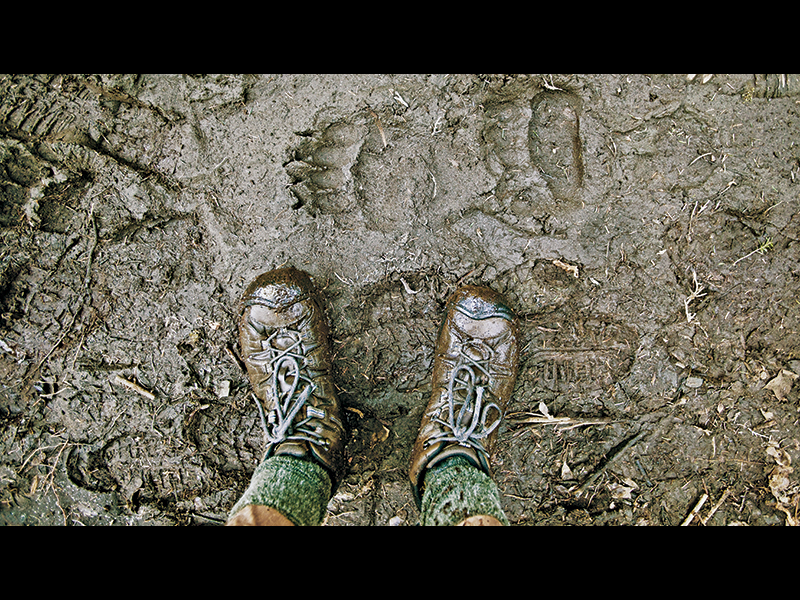 6 of 6
Bear Defense: Identifying Predator Territory
A bear’s hind foot closely resembles that of a barefoot human’s, but you can tell the size and sex of a bear by the width of its front paw print. 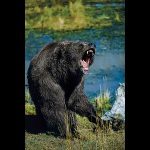 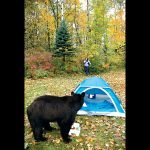 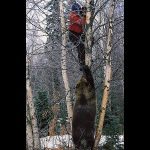 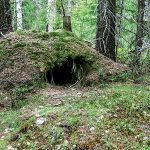 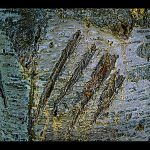 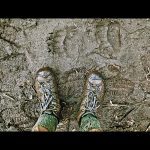 I once encountered a tundra grizzly on a two-hour float plane ride north of Yellowknife in the Northwest Territories. I first spotted him just as he topped over a long ridge, his coat shimmering in the sunlight as he stopped to survey his kingdom. He had no idea I was nearby, and I was hoping to get some photographs of him. Suddenly, my young Inuit guide, Andy Kimmelwick, approached me with his rifle at port arms. “Grizzly!” he whispered as he pointed in the bear’s direction, “and I think it is a boar.” “Can we circle around so I can maybe take a few photos of the bear?” I asked with some trepidation. I wasn’t expecting a bear attack. 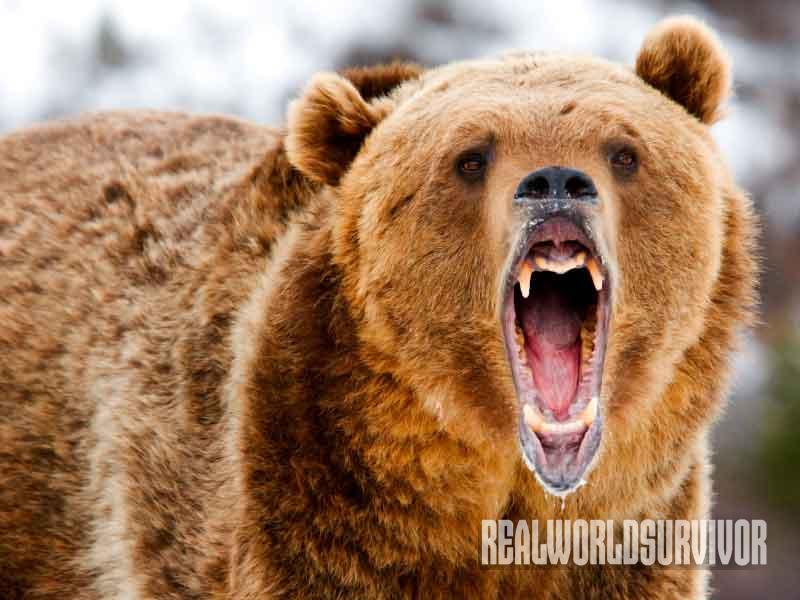 6 Ways to Escape a Bear Attack

When we looked back at the bear, however, he was charging at us at full speed, and I realized that getting a photo of the grizzly was now out of the question. I also knew I could not outrun the bear, or Andy for that matter, not with 70 pounds of photography tackle weighing me down in my backpack.

The previous day, outfitter Moise Rabesca, a native Dog Rib Indian, gave us all a stern lecture on how to coexist with these animals. “Grizzly bears are part of our religion. We do not speak ill of them, nor do we ridicule their presence. We take this very seriously, and if we hear of anyone talking bad about the bear we will put them on the next float plane back to Yellowknife. There will be no refunds.”

More Afraid of Us?

Those words were ringing through my head as I looked in horror at the fast-approaching bruin. I thought we were going to get mauled. As it turned out the bear was more afraid of us and was actually running for cover along a brush-choked creek bed a scant few yards in front of us. We never saw the bear again. To this day, I do not speak ill of grizzly bears, not even in jest.

Grizzly bear encounters are quite rare, even in prime habitat. Black bears, however, are quite common across North America. And although your chances of being struck by lightning are far greater than a bear attack, black bears have been known to maul humans.

Most of us come into contact with black bears in the autumn. There is good reason for this. Fall is when bears enter a stage biologist’s call hyperphagia. This is when bears are feeding nearly around the clock, putting on 2 to 3 pounds a day in preparation for hibernation. What can you do to minimize a chance and potentially dangerous encounter with a black bear in the fall? Learn to read bear sign!

Warning Signs of a Bear Attack

Bears leave footprints in soft soil, most notably on jeep trails and around creek beds and beaver dam crossings, in addition to preferred seasonal feeding areas. The hind foot closely resembles that of a barefoot human being, but it is the front foot that yields the most information. Indeed, you can often deduce the size and sex of a black bear by the width of its front paw print, measured across the pad just under the toes. A 5-inch pad is nearly always a boar in the 300- to 500-pound range—or heavier!

The presence of bear scat is another sure sign you have a bruin in the area. A hard stool resembles the stool of a human. If you examine it closely, you can often determine what the bear has been chowing down on. Bits of acorn shells, beechnut husks, blueberry skins, cherry pits and, of course, apple seeds are all dead giveaways. Do not be confused with small, loose piles of dung filled with seeds, however, as they are most likely signs a raccoon is also working the area. Stool the diameter of a pop can is from a huge and scary bear!

A mature boar will often claim a food source as his own, and will deposit his scat on trails leading in and out of the area to warn other bears to keep out. These are areas best to be avoided for fear of a bear attack. Bears will often mark their territory by clawing and biting tree limbs and state park trail markers. However, they rarely return to these signposts on a regular basis, so there is no need to be frightful.

Another strategy to avoid a close encounter with a fall black bear is to identify probable feeding sites. In the late summer and early fall, bears are attracted to black raspberries and blueberries, which are often found growing in two- to three-year-old clear-cuts. This is where berry pickers often have a dangerous face-to-face encounter with a bruin.

One recent fall, I was walking nonchalantly through a Pennsylvania clear-cut ripe with blueberries. Suddenly, a big bear rose up on its hind legs right in front of me—and woofed. The bear dropped to all fours and climbed a nearby tree, woofing loudly. I heard a noise and looked down to learn what she was so concerned about. Horror of horrors, I had inadvertently walked between a sow and two cubs.

I yelled to let her know I was a human. She then woofed several times, calling to the cubs. They immediately left my side and joined the sow, much to my relief. The trio soon disappeared and my heart rate returned to normal. If I were wearing a bell or had my dog with me, I doubt I would have ever had the encounter. The lesson here is to pay attention to your surroundings. Identify yourself ahead of time with noises, including yelling, bells, whistles and more.

In wilderness areas, bears will congregate on beech ridges, acorn flats, abandoned apple orchards and, in the early fall, stands of wild cherry. They will climb into these trees to feed. In so doing gouge the soft bark with their claws. If you stumble upon trees with fresh clawings and several piles of dung under the canopy, it is best to move along.

Acorns are a prime fall favorite food source, and mature males will put off going into hibernation as long as there are plenty of these morsels lying on the ground, even if they are covered with a foot of snow.

However, you should resist any temptation to follow any bear tracks in the snow. You probably will not catch up to the bear, but a bear about ready to go into its den will sometimes chew down several inch-thick saplings and position them in crisscross fashion for a temporary snow bed. This stops them from sinking into the deep snow while they’re sleeping. You don’t want to disturb the bear before or after it has entered its den.

Bear Meals on the Farm

In farm country, bears will chow down on cultivated apples, ripening oat fields and especially uncut corn lots. Indeed, bears are attracted to corn like moths to a flame. Do not be confused, however, if you find the outermost rows of a cornfield knocked down and trampled, as this is a sure sign a family of raccoons is eating the corn and not a bear.  Climb a tree to get a bird’s-eye view of the lot. If you find vast stretches of the interior flattened, you can rest assured a bear is responsible and it will be in your best interest to vacate the area.

If you suspect bears are raiding a farmer’s field and cannot find any tracks or scat, hang a length of barbed wire 3 feet or so above a well-worn trial leading into the area to help confirm your suspicions. Bears will duck to go under the wire and inadvertently leave a sample of their fur on the pointed barbs.

Bears, especially males, can be territorial and will hold their ground when confronted with a human. I was walking downhill along a well-traveled trail in farm country one day and watched as a 150-pound bruin walk up the same trail towards me. We just stood there looking at each other, 50 yards or so apart. It seemed like an eternity. It was the proverbial Mexican standoff!  I picked up a dead log and slammed it on the ground next to my feet, thinking it would spook the bear away. No such luck.

The bear slammed its paw on the ground in response. Then sat down on its haunches like a junkyard dog staring at me. I got the message. I slowly walked off the trail and downhill, circling the bear. When I got back on the trail below the bear, it walked away, apparently satisfied I had given it the respect it required.

If you encounter a grizzly, the best advice might be warnings I received from my guide while on a horseback adventure in the Yak drainage system in northwest Montana. Do not store any food in your tent and certainly no food in your sleeping bag. Metal containers that are secured at night will prevent a hungry bear from cashing in on your supplies.

If you stumble upon a grizzly, do not take off running in fear. It could easily trigger the animal’s predator-prey response, and that means it will catch up to you in a flash and take you down. Instead, turn sideways, hunch your back and lower your head so as to appear non-threatening, and then speak to it in low tones as you slowly back away.

The thought of seeing a grizzly bear or any wild predator in the wild is intoxicating. But if you want to make it out alive when entering bear county, it is best to maintain a healthy distance and give the animal the respect it deserves. 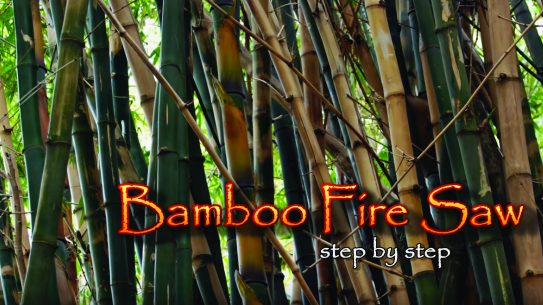 VIDEO: A Bamboo Fire Saw Tutorial For a Quick and Easy Fire

If bamboo is all that you have, then bamboo will have to do. Making...