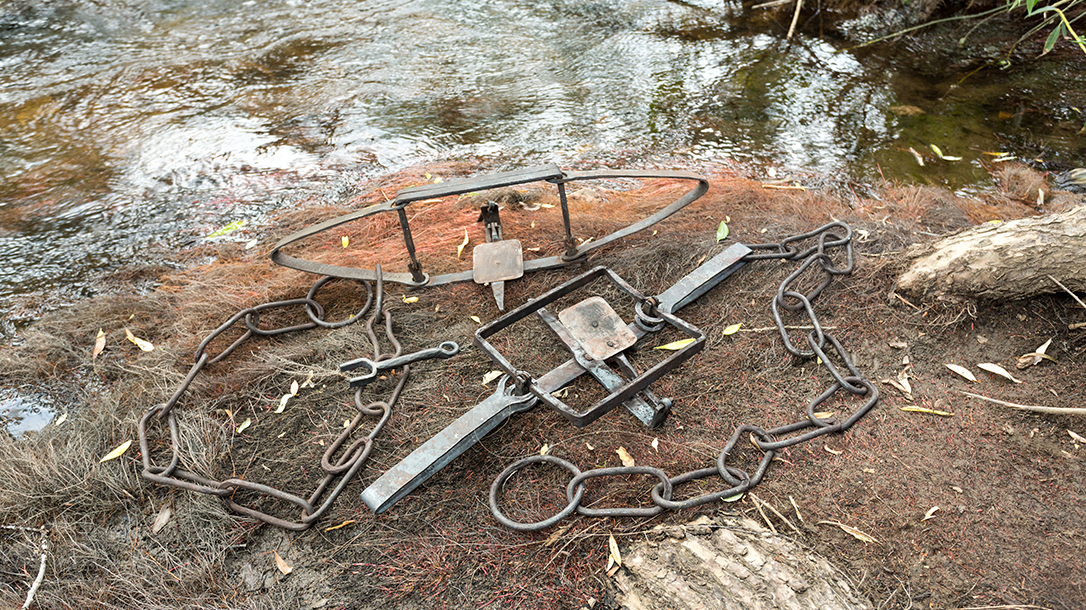 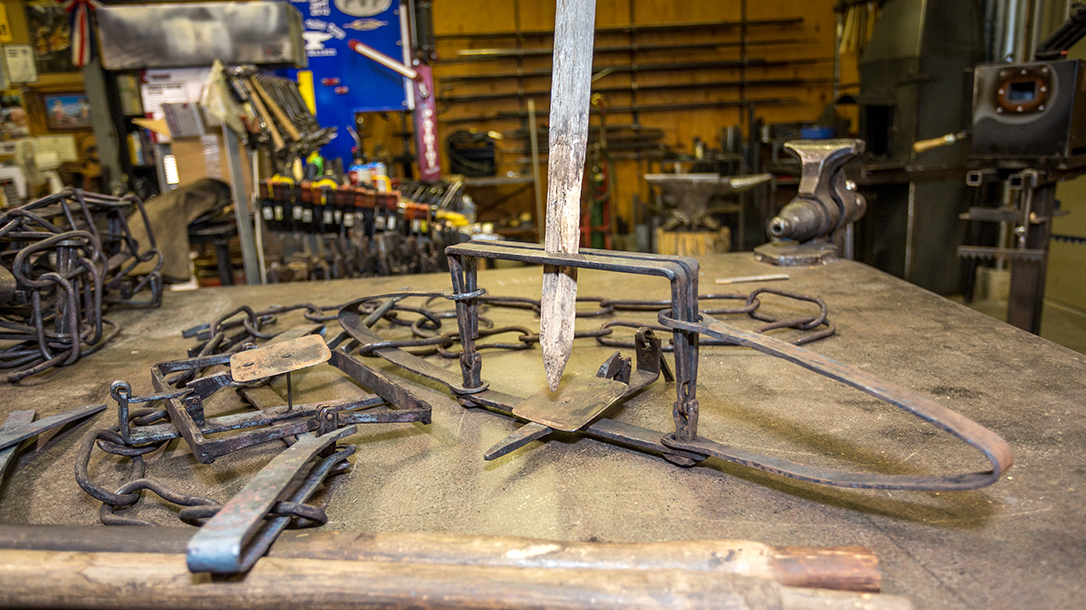 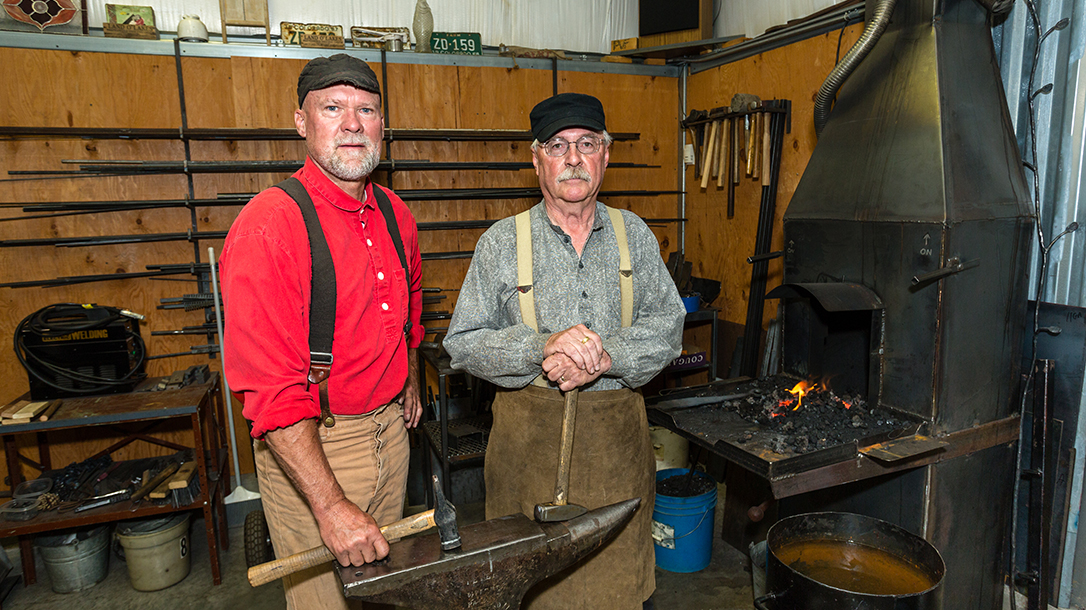 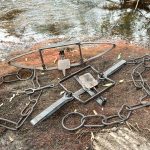 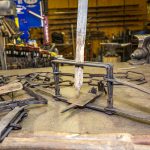 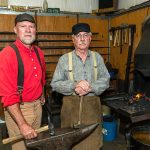 In the true spirit of the American frontiersman, blacksmiths Donald Hanson and Andy Morris from Colorado Springs manufacture authentic, functional beaver traps like those used by trappers during the 1830s. And they do so by using the same basic equipment and tools trap-makers of that era would have. The 5-pound, period-correct traps that they make are modeled after one of the devices that were used on the Hoback River near Jackson, Wyoming. The original traps of that design are on display at the Museum of the Fur Trade in Chadron, Nebraska. 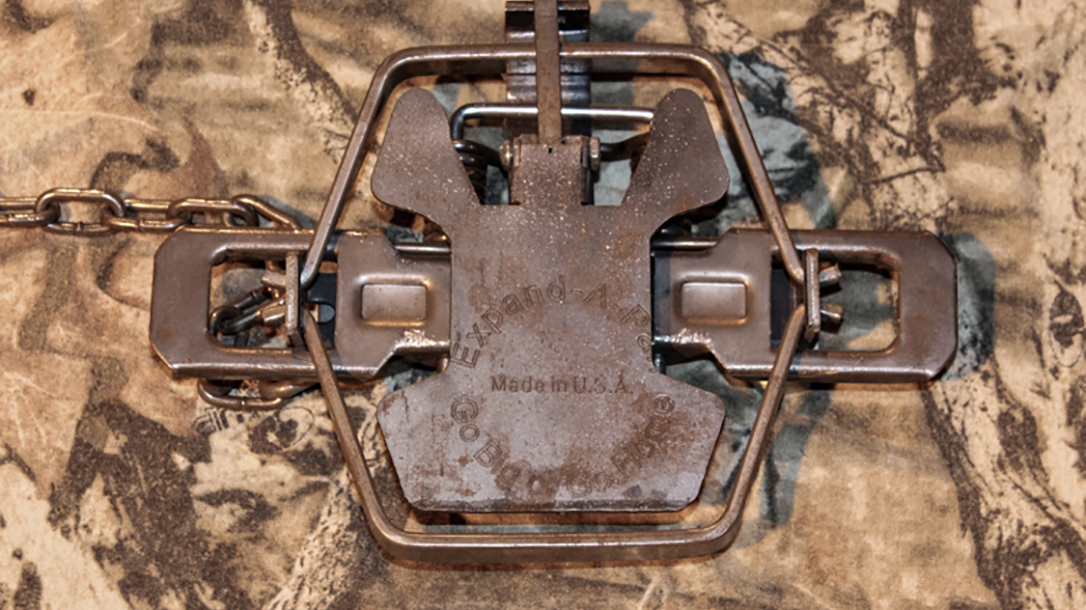 Crank Up The Forge

The pair of veteran blacksmiths, who have known each other for 20 to 30 years, have worked on a number of projects together over the years. These include branding irons, knives out of chainsaw chains and metal gates, to name a few. They got into the trap-making business when someone showed up at their shop asking for help. A participant in historical muzzleloader reenactments needed a trap with broken springs repaired.

Andy had gotten into blacksmithing as a part of historical reenactments, and Don was also interested in the role blacksmiths played in frontier days. So, the trap-repair request was right in their wheelhouse. They took the project on as a new challenge.

“He left the trap with us for a number of months to see what we could do with it,” they commented. “Forging the steel for the traps was fun. We knew we could do that. The challenge was hardening and tempering the springs so they would work properly.”

What followed were months of research and trial and error. They used historical trapping expert Allen Harrison from Oklahoma as a resource. Also they referred frequently to a book titled The Steel Trap in North America by Richard Gerstell, another historical trapping expert. They even visited mountain man encampments to see their traps and talk to those who owned them.

They discovered that the springs were truly the weak link of historical traps. Springs frequently broke like they did on the one that was brought to them. That’s why pioneering trappers usually brought extra springs with them when they were checking their lines.

Traps were designed with a pair of removable bolts that held springs in place so the springs could be removed and replaced as needed. The cost of these springs normally amounted to one-third to one-half the price tag of the traps, reflecting how valuable those parts were to the finished product.

“We were meticulous to make sure we got things right,” they said. “We’re determined not to buy manufactured springs. Also we made them ourselves, and it took us months, working at it part-time, to get it right. We weren’t interested in seeing how quickly we could do this. We wanted the traps we made to be authentic reproductions.”

“It was a challenge for us to get the hardening and tempering right. When you forge steel, if you just harden it, it’s going to break. The springs had to be tempered properly to get the best results. Tempering lets heat go back in the steel so it’s not so brittle. If steel is tempered too long, the springs will be spongy, enabling an animal to pull its leg or foot out of a trap.”

The blacksmiths also feel that the cold water temperatures of beaver ponds and rivers had to affect the effectiveness of springs on historical traps. After days of being set in cold water, they believe that springs would weaken and close slower, increasing the chances of missing an animal that sprung the trap. This is another reason that frontiersmen may have changed springs on their traps before resetting them. Fresh springs would increase their chances of catching the critters they were after.

Don and Andy make all of the trap parts from standard steel that they purchase in 20-foot lengths. They buy 0.5-by-05.-inch solid bar and 0.25-by-1-inch flat stock to work from. That stock is then cut to size and length for the various parts with a band saw.

“What a blacksmith generally does is take a piece of metal and change its shape into what you want,” Don explained. “You don’t take anything away from that piece of metal or add anything to it.”

Tools Of The Trade

To shape metal, you need fire produced in a forge to heat and soften the metal. Don and Andy have two forges: one fired by coal and another that burns propane gas. They used the coal-fired forge for much of the trap making.

Tongs are used to grip pieces of steel for putting them in and taking them out of the forge as well as while they are being hammered into shape. “There’s hundreds of tongs,” Hanson said. “The tongs are shaped to grip steel based on the shape of the steel. We make a lot of them ourselves.”

The pair also make many of the punches they use. Punches are used to make square holes in metal, and drills are employed for round holes. The blacksmiths also make different jigs to help them shape the metal for various trap parts, so each part will be consistently shaped.

“A jig is a device to place metal in and bend it so it conforms to the shape of the jig,” Don said. “We use a jig to make the trap jaws, for example. We lay the metal for the jaw in the jig and get the same bend each time.”

When making beaver traps, the pair split up the workload to make the process go as smoothly as possible. Don normally starts making the posts, dogs, pans and crosses while Andy does the springs and jaws. They also make the nuts and bolts necessary to hold the springs in place. They use taps to put threads on the inside of nuts and dies to put threads on the outside of bolts.

Annealing, or heat-treating, the steel is an important part of the process. The steel is heated to soften it so the metal can be bent until it is in the proper shape. After the parts are properly shaped, they are slowly cooled to re-harden them.

The jaws are riveted together as part of assembly. Don and Andy hand-test springs before assembly and match the springs in pairs from the weakest to the strongest. Chains are also added to the traps. The chains are welded using the forge. Borax is used as flux during the welding process.

“We can make traps any size, but most of our traps have a jaw spread from 7.5 to 9 inches,” the blacksmiths said. “The traps weigh 5 pounds, and the chains weigh 2 pounds. Trappers in those days relied on the weight of the trap and chain to drown beavers that they caught. Most trappers carried six traps with them.”

“There’s a limited market for the traps we make,” they said. “In the state of Colorado, you can’t use a trap like this. Trappers are limited to body-gripping traps that kill instantly in this state. Even though our traps are 100-percent functional, we aren’t making them for trappers where these types of traps are legal to use. Our market is the reenactment folks.”

Anyone who is interested in authentic, period-accurate traps from the 1830s can contact Don and Andy at [email protected]. 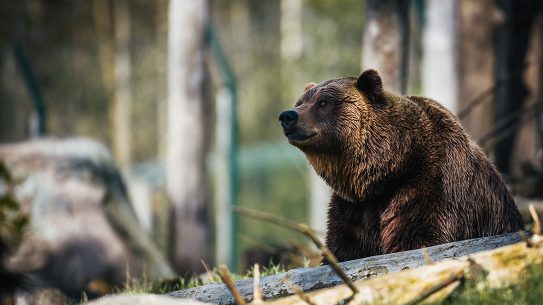 It is important when in the backcountry to identify bear territory and be prepared...